Phyrexia brings back memories for many long-time Magic: The Gathering players, as the machinated, yet also biological Phyrexians are once again seeking to make all One in the multiverse. The upcoming set, Phyrexia: All Will Be One, is a culmination of the last few set’s storytelling, which set up the Phyrexian threat across the Magic multiverse.

New Phyrexia is literally built on what remains of old Mirrodin, another iconic plane in Magic’s decades-long history. The Phyrexians have built layers upon the surface of old Mirrodin, throwing the five suns (each corresponding with one of Magic’s main points on its five-color wheel) into disarray.

It’s not only the world of New Phyrexia in something of conflict, the Phyrexians themselves are in a sort of conflict with themselves. As Wizards of the Coasts points out in our press briefing last week ahead of this announcement, the Old Phyrexians were mono-colored and were in much greater alignment with their core color as a whole.

The focal point for each of the Phyrexian mana alignments are the Praetors who have been introduced in previous sets. At the center is Elesh Norn, who demands allegiance from the other four as she sets herself up to replace Yawgmoth, the Father of Machines. The new full-art basic lands represent of each of the Praetors on the Plane, with each piece of artwork capturing the Phyrexian symbol in the sun in the process. Each basic land is getting the Phyrexianized version as well, complete with slogans that represent its Praetor. The art is created by Mark Riddick, who is known for his artwork on metal album covers.

Each of the Praetors will see a card with a monument to their glory, the “Sun’s Twilight” set of cards in Phyrexia: All Will Be One. The cards represent not just the hubris of each of the Praetors, creating a monument to their glory on the outermost layer of New Phyrexia, but also gives a glimpse into their personalities. From White Sun’s Twilight showing Elesh Norn “controlling” the White Sun, while Sheoldred, the Black Mana Praetor dominates her sun with her monument on Black Sun's Twilight.

While the Phyrexians have a stranglehold on New Phyrexia, the Mirrans who inhabited the now-destroyed Mirrodin are still here, resisting. On the layer of Mirrex, we find the original world of Mirrodin, albeit desolate and destitute thanks to the Phyrexians harvesting all the resources to create the other layers.

The Mirrans themselves play a role in the new set, with many of the main characters in Magic’s story arcs coming to the Plane to combat the Phyrexian threat on the multiverse with the aid of those resistance fighters.

Really gathering them all is the Planeswalker Koth, who effectively leads what’s left of the people of Mirrodin against the Phyrexians. However, the Mirrex isn’t the only layer where these refugees live, as the Furnace Layer, home to the Red Mana-aligned Urabrask also sees a sizeable amount of Mirran resistance fighters.

Helping the resistance are Planeswalkers who have been mobilizing in recent sets as the threat of the Phyrexian onslaught started to be teased going as far back as Vorinclex in the Kaldheim set from last year. 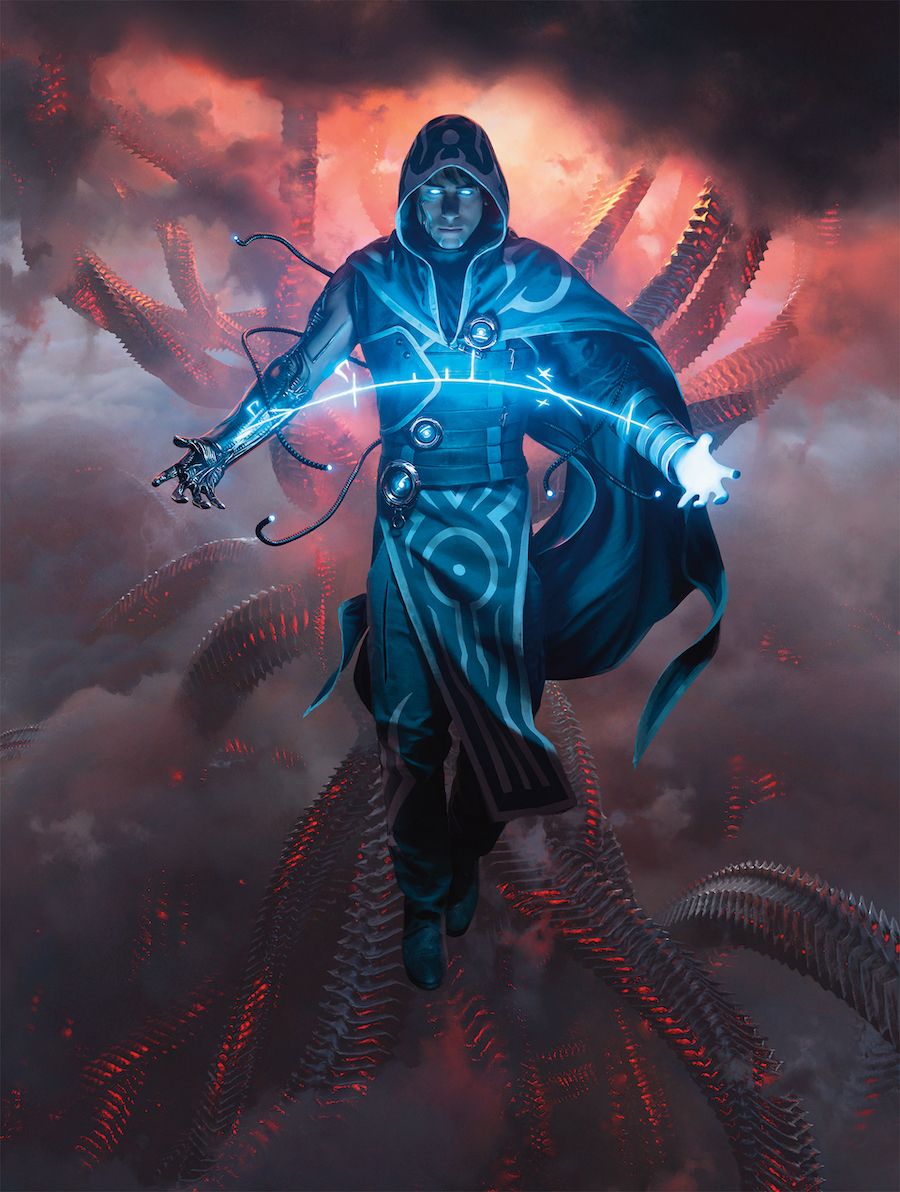 However, not all Planeswalkers have escaped their time on New Phyrexia unscathed, as cards trickling out of Wizards ahead of today’s reveal have started to show. The Phyrexian Blue Mana-aligned Praetor Jin-Gitaxias has discovered a way of successfully “compleating” Planeswalkers without losing the Walker in the process. As a result, many of Magic’s most iconic characters, from Nissa to even Jace Beleren have fallen victim to the process.

These cards highlight a new mechanic brought on by Kamigawa: Neon Dynasty, “Compleated” which allow players to pay two life in place of part of the mana cost, but as a result, the Planeswalker enters the battlefield with two fewer loyalty counters.

The art, though, is riveting, as they hearken back to some of each Planeswalker’s most iconic cards. It’s pretty clear too, with Nissa Ascended Animist evoking her artwork from War of the Spark’s Nissa Who Shakes The World to Jace, The Perfected Mind clearly going for some Jace, The Mind Sculptor vibes. Clearly the artists on Phyrexia: All Will Be One took cues from Magic’s history here with great effect.

Not all the Planeswalkers have been Compleated, however, with Koth, Fire of Resistance, and Kaya, Intangible Slayer escaping the clutches brought on by exposure to Glistening Oil.

Familiar Threat With Some Familiar Mechanics

One thing that Phyrexia is known for is its penchant for infecting things (hence the Phyrexian symbol sharing the symbol of the Poison Counter). Phyrexia: All Will Be One brings Poison Counters back to Standard, with a new twist.

Toxic operates like the old Infect mechanic where it deals its damage in poison counters. However, unlike Infect where it doesn’t do normal combat damage, instead, it would deal -1/-1 counters to blocking creatures or not affect the life total of a player, Toxic also deals regular combat damage. 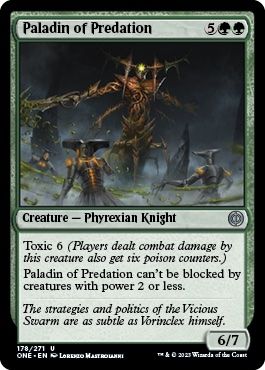 An example would be the Green Mana card Paladin of Predation. This is a 6/7 Phyrexian Knight who has Toxic 6, meaning when it deals damage, it deals six poison counters alongside the damage itself. So if a create were to block, it would deal its damage normally, whereas if an attack struck home on a player, it would not only bring their life totals down but also give them six poison counters, speeding up the clock of their demise.

Working with Poison Counters, the new Corrupted mechanic plays off of them by giving a boon to you if your opponent has Poison Counters dealt to them. This could be in the form of giving all of your creatures Toxic and Lifelink, as is the case with Skrelv’s Hive, or giving The Seedcore, a Land, the Tap ability to give a 1/1 create +2/+1 till the end of turn thanks to your opponent having three or more poison counters. It’s a great way to create synergies within your deck and really reward players for not simply being content to drill down combat life totals, but also dealing in Poison. 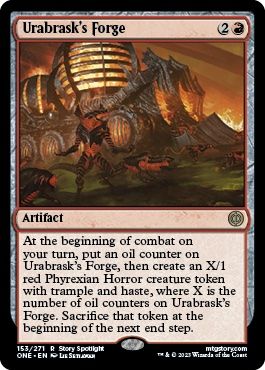 This mechanic augments a card on a per-card basis, meaning each card that uses them will tell you what those counters do. In the case of Urabrask’s Forge for instance, these Oil Counters allow players to create an X/1 Phyrexian Horror creature where X is the number of Oil Counters on the Forge. The design team also states that Oil Counters in Phyrexia: All Will Be One are used largely in place of traditional +1/+1 or -1/-1 counters. 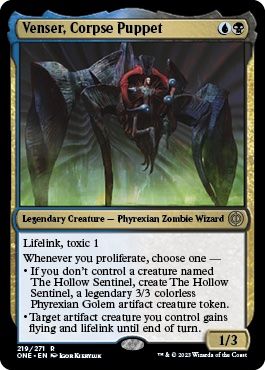 Proliferate is a returning mechanic which allows players to tick up any counter that a player or permanent has. So in this case, you could tick up a Planeswalker Loyalty counter or a Player’s Poison Counter. Some creatures play off of this mechanic as well, as shown on the Legendary Creature Venser, Corpse Puppet, which allows players to create a creature token or give an artifact creature flying and lifelink whenever you Proliferate. 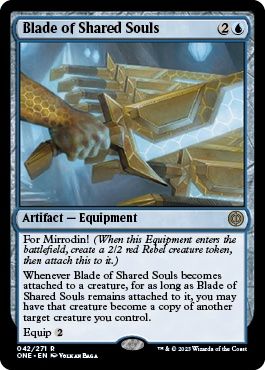 For Mirrodin! Is a mechanic that showcases the Mirran resistance. Equipment that has this mechanic will enter the battlefield effectively already attached to a 2/2 Red Rebel creature token.

There will be two Commander decks releasing with Phyrexia: All Will Be One, highlighting the two sides of the conflict. A Boros-themed Commander Deck helmed by Neyali, Sun’s Vanguard takes the side of the Mirran Rebels, while the Abzan colored Ixhel, Scion of Atraxa takes up the cause of the Phyrexians.

Ixhel’s deck is very much centered around the Poison mechanic, where you try to effectively corrupt each opponent to take advantage of those Poison Mechanics. Neyali’s deck plays with the For Mirrodin! Mechanic, giving a boon to tokens (which can be created by the mechanic) when attacking.

Like many sets before it, Phyrexia: All Will Be One features special printings of many of the cards in the set. As we mentioned previously, the lands will be getting the Phyrexian metal treatment, but we will also see borderless Manga-style cards, drawn by famed Manga artist Junji Ito, as shown in the Elesh Norn, Mother of Machines spoiler below. 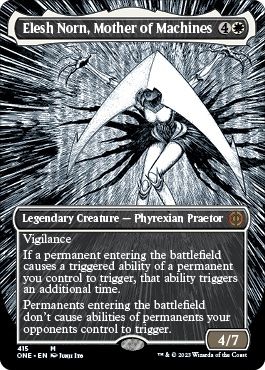 The cards in the set will also be getting Ichor-style color treatments, giving each card with the treatment a more abstract style. While cards like Elesh Norn, Mother of Machines and Mondrack, Glory Dominus use more of the blacks and negative space to evoke this body horror-vibe that Phyrexia is known for, the soft brush strokes of Ezuri, Stalker of Spheres is also a welcome addition to the set. These cards will be both Rares and Mythics and found in every type of booster pack sold.

Phyrexian cards will also be included, and by that we mean that the entire card will be written in Phyrexian. So, keep Gatherer handy when playing at your local game store. Wizards is also slipping in another special treatment in for those who buy the Phyrexia: All Will Be One Bundle: Compleat Edition: Oil Slick Raised Foils. These cards are striking, looking like and oil slick across the foil, highlighting the negative space that makes up the card’s artwork. It’s a striking look that will no doubt find their way into the collections of many Magic: the Gathering players. Let’s just hope they don’t succumb to Magic’s historic foiling issues.

While many prefer paper Magic still, Magic: the Gathering Arena is still an incredibly popular way to play the card game. Coming with Phyrexia: All Will Be One is a new Phyrexian-themed battleground, as well as some cute (?) Phyrexian pets to play with while your opponent decides whether to scoop.  The Flensing Raptor is available as a pre-order pet, while you can earn SKitterlings as part of the Mastery Pass system in-game. 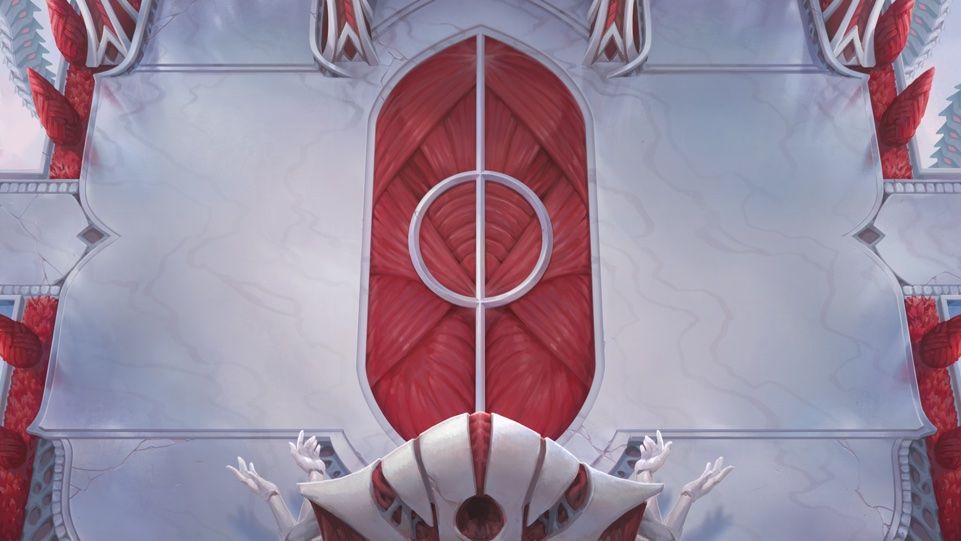 There will be many a bundle for players to grab as well if they are looking to rise the ranks of Arena versus Paper Magic, from the Jace Pack which is similar to other bundles released in Arena’s past, while two new bundles are dropping as well aimed at getting players cards and cosmetics at a lower barrier of entry.

Phyrexia: All Will Be One is fast approaching, with Arena’s early access date set for February 2nd, while pre-release events are going on in local game stores starting on February 3rd. Magic: The Gathering Online and MTG Arena will see the set launch on February 7th whilst the official launch date for tabletop will come on February 17th. You can check out the full details from Magic’s official stream embedded below.

Tags
mtg arena
wizards of the coast
magic the gathering online
phyrexia all will be one
Play Magic: The Gathering Arena Now