Swanfleet is absolutely beautiful. The first time I stepped outside the gates of Mossward, the new starting village in The Lord of the Rings Online's latest content drop, Before the Shadow, I was hooked. Rolling fields opened up in front of me, hills dotting the landscape as well as broken ruins and towers to the people long past. This is an area that, in the Second Age, likely saw a fair bit of destruction thanks to the wars between the Elves and Sauron in neighboring Eregion.  Yet the team at Standing Stone Games have built a region that is absolutely beautiful to behold, yet evokes that history a bit.

Greeting players who chose to do so is the new starting experience. You can decide between Before the Shadow or Shadows of Angmar when you make a character, so naturally I wanted to see what the new area was all about. So I created another Burglar and dove headlong into the new content.

You arrive in the idyllic hamlet of Mossward, a small town to the west in Swanfleet just south of the Greyflood. The village reminds me some of Archet, the first town you visit in the old starter experience when you choose either a Hobbit or Man character. And indeed, the story plays out some of the same way: Mossward is attacked and you're roused to help the villagers take on the interlopers. Where Archet you're fighting against men who have betrayed the city to the Nazgul, Mossward's proximity to Isengard and Saruman see the mighty Uruk-Hai attempt to take over the small town.

It's a short instance, one to simply teach a new player the ropes in combat, and then you're pretty much turned loose. Unlike Archet, or even Ered Luin's starting quests before, you're not locked into an instanced part of the zone for long. Before the Shadow's two new areas, Swanfleet and Cardolan act as new zones to level toons in without needing to travel to Bree-land, The Shire or Ered Luin to do so. It's a more streamlined affair where players are all together, regardless of their starting race. 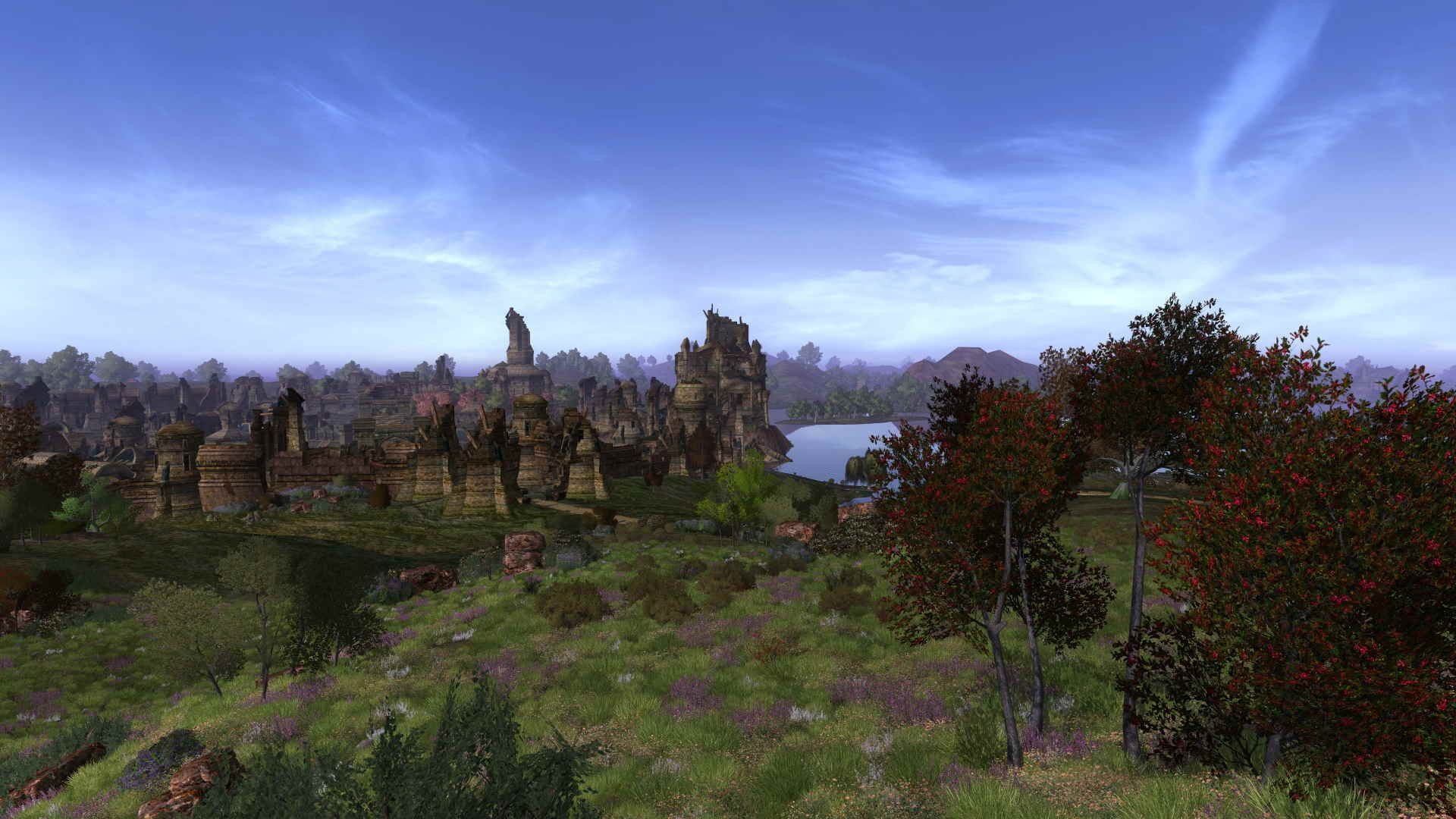 It also helps someone like me, who wants to play more than my Hunter that is as old as the MMO is now, but doesn't want to repeat the same starting zones again and again. I've made nine separate characters and I just cannot get them past level 40 because I don't want to relive the same stories over and over again with them when I realize I'm not having fun with a class.

Now, though, there is an entirely new playground to run around in, and it's absolutely breathtaking at times. Reminding me of the landscape of the Gladden Fields on the other side of the Misty Mountains, the hills and valleys are covered in lush vegetation, while the bronze rock outcroppings litter the landscape. It's definitely a more open world versus, say, Ered Luin, which felt pretty linear, top to bottom. It reminds me a bit more of Bree-land and The Shire, where while the story in each takes you on a more linear path, the zones themselves were more open to explore.

I found myself going to the tops of hills, zooming in all the way and just taking in the rolling vistas before me. The Lord of the Rings Online's draw distance is one of the best in any MMO to release, before or since, and it's on full display here. It's an instance where I never feel closed in, but the world unravels all around me, begging to be explored to the fullest.

Swanfleet has multiple settlements to visit as well aside from Mossward, but it's here I spent much of my time early on. Because it throws you to the wolves effectively instead of letting you level up early on in a more closed environment, I found myself exploring the world around the small village. Before the Shadow takes place...well...before Shadows of Angmar, and so while the effect of the Uruk raid is felt, it's not clear to the citizens of the zone that their peril is about to get worse. Visiting the Stoors in Clegur, a small Hobbit settlement south of Mossward, shows this stark reality in plain sight. 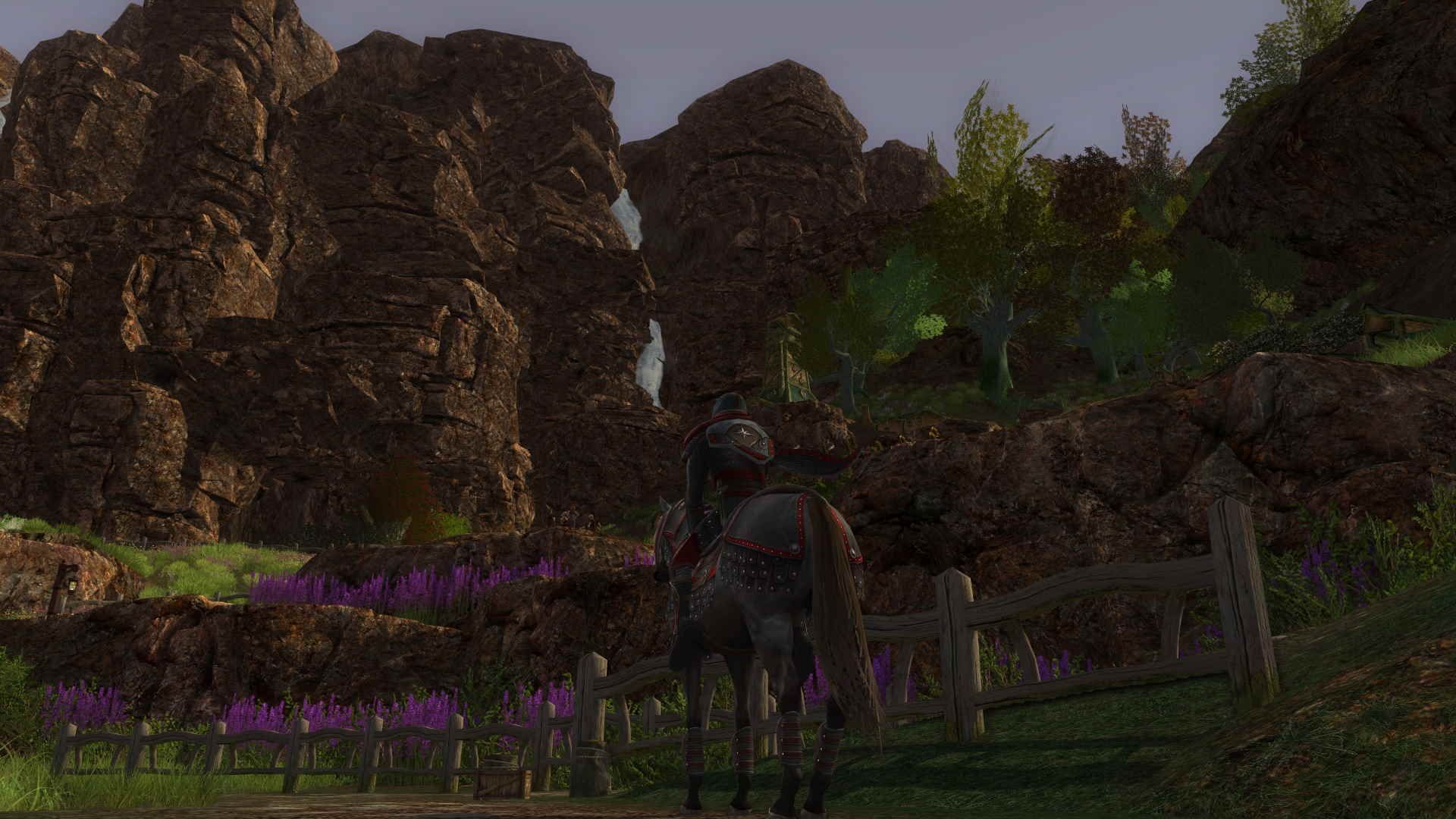 Dancing Stoor Hobbits stick out as a majestic waterfall crashes down from the heights above. Large Sunflowers, probably taller than the Hobbits themselves, dance in the breeze in the many farms in Clegur. At nighttime it felt like I was just in a more rugged part of the Shire, and even reminded me of some of the Hobbit settlements in nearby Enedwaith.

Thankfully, there is a lot to do in Mossward and the surrounding areas. While the Prologue quest saw me work alongside a new Ranger, Meneldir, to try to uncover the reason for the Uruk's presence, I was just as happy to go collect meat for the Stoors in Clegur, or visit the people of Lhan Ghan thanks to the wishes of an envoy in Mossward. The people of Mossward are picking up the pieces after their peace was shattered, so there are plenty of things to do to keep new players leveling up.

It goes back to something I've been saying for years: The Lord of the Rings Online has been at its best when the development team are able to stretch their creative muscles and build from the gaps that Tolkien left them. Swanfleet, and by extension Cardolan, are very much examples of this. We know these places existed because they are on the map, we know the history of Cardolan thanks to the documented wars between the Northern Kingdoms and Angmar during its height. But we don't know nearly as much about them as we do The Shire, or Bree-land. This leaves a lot of room for the LotRO team to flex their muscles and build out experiences that are both Tolkienian in feel, but wholly their own. 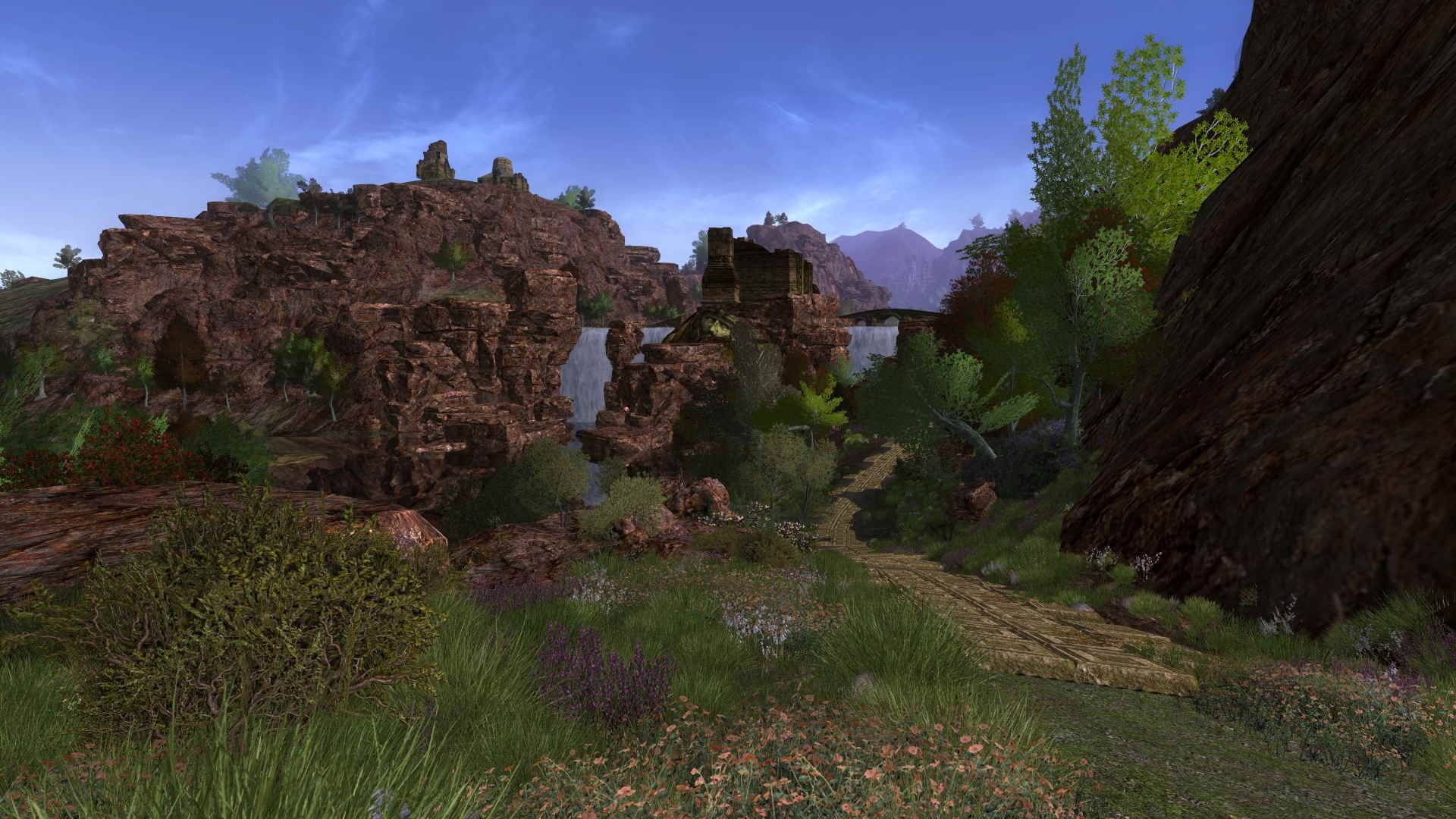 I smiled when hearing the banter between the Dwarven blacksmith Skadi and Meneldir, the Ranger, at the outset of the new instance. I wanted to help the people of Mossward pick up the pieces after the attack, as well as teach the young children who were enamored with the fallen Uruk Chieftain's sword the dedication and danger being an adventurer entails.

Hopping on my horse, I went to explore the Greyflood delta in Swanfleet, and it looked majestic. The art team has outdone themselves, and going from Swanfleet to the original starter zones shows just how far we've come visually, even though they both are using the same engine and assets.

Oh, and the music! I'm enjoying the new soundtrack for the zones, especially the music that plays inside the blacksmith's shop. Bill Champagne's work should not go under-appreciated here. It's marvelous and I've found myself since Before the Shadow's launch sitting at my desk with the game playing in the background just so I can listen to it at times in the last two days.

There is still a ton to explore. I want to see Cardolan and walk the same paths as the old kingdom of Men. I'm hoping too, as I get further along in Swanfleet, that we start to see some of the influences from the Noldor in Eregion crop IP, especially as this was a region whose roads went straight to Ost-in-Edhil, the Fortress of the Elves in that region where the Rings of Power were forged an age past.

We'll have more as we're planning to review the new mini-expansion in the coming days. Up next is the rest of Swanfleet and Cardolan, as well as a dive into the new Delving system for end-game players looking for something to do in Before the Shadow aside from rolling another alt and starting anew.

Tags
mmorpg
lotro
before the shadow