I've spent the last six months or so trying to find the best MMORPG to play on Steam Deck. Since Valve's platform launched, this has been my main focus: can I take my favorite worlds on the go with me, or will my Steam Deck just become a glorified JRPG machine like my PlayStation 4 Pro has become?

But when Guild Wars 2 launched on Steam earlier this year, I was pretty determined to give it a go, but since it wasn't Steam Deck verified, I figured it wouldn't be something I could jump in and play. Instead, it would require some major setup to turn this mouse and keyboard MMO into something manageable with a gamepad control scheme.

It doesn't help me either that the last time I played Guild Wars 2 was its launch. Around the same time I was working on an Elder Scrolls Online-focused podcast, I was knee-deep in The Lord of the Rings Online (I mean, when am I not, though?), and while I enjoyed Guild Wars 2, I didn't really have anyone around me playing, so I fell off rather quickly.

Fast forward to now, and it's one that, with a bit of work, I'm genuinely enjoying on the Steam Deck, despite it being a smidge jank.

What makes Guild Wars 2 playable straight up on the Steam Deck is thanks to its support of an action combat camera. While you can play with your traditional tab-targeting of yesteryear, GW2 has an action camera mode that allows you to control the MMO more like an action RPG. In doing so, it frees up the need to use the mouse cursor to navigate the MMO's UI, instead turning the mouse look into camera.

As a result, this means that I can control my Guild Wars 2 Thief as if I were playing ESO or Black Desert Online. However, this doesn't exactly solve how to interact with enemies, use skills, access the myriad windows that require my attention, and more. Thankfully, I'm not the only one who has been interested in doing this.

Steam's support for multiple control schemes for controllers lets players share their controller builds with the community. As a result, there are quite a few control schemes on Steam Deck to choose from. After trying a few out, I settled on Sam CW's Guild Wars 2 Steam Deck ABXY Layout v1.0 (that's a mouthful) as it provided the best and most streamlined-feeling control scheme for the MMO. 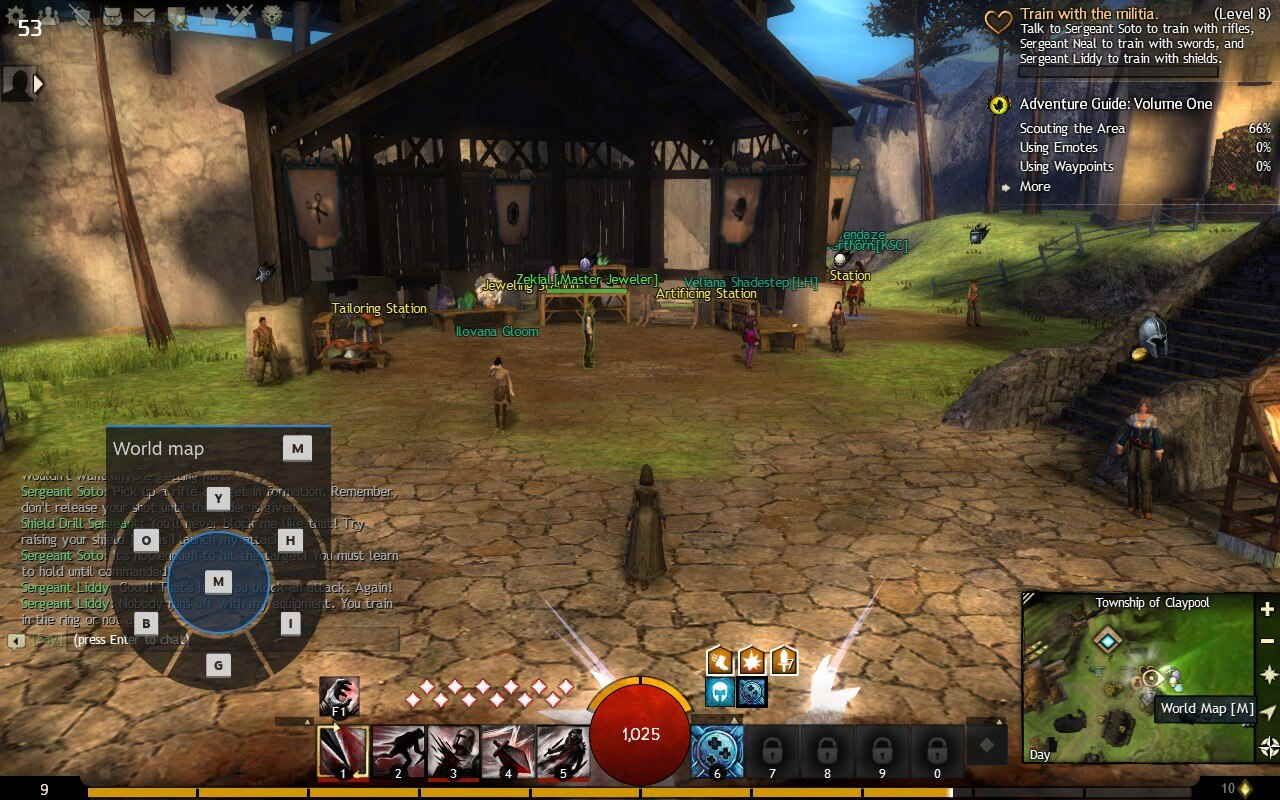 The mouse look is mapped to the right touchpad, and it feels incredibly natural to control the MMO this way. As a way to navigate the various in-game menus, from the Hero panel, inventory, to your map and more, these hotkeys are all set up on the left trackpad. It took some getting used to there, but once I figured out how it was laid out, with each panel having its own "quadrant" of the trackpad, it became like second nature to me.

Combat is rather simple to control as well. Your main attack is mapped to clicking the right trackpad, while the skills themselves are on the face buttons. Since there are only four face buttons, pulling one of the rear paddles will give you access to the rest. Jump and dodge are mapped to L1 and L2, while profession skills are toggleable using R1.

While it feels natural compared to other controller layouts on Steam, it does take some getting used to, as well as a need to tweak down sensitivity to make sure that when you swipe the trackpad the camera does just fly everywhere. But once it clicks, it feels like Guild Wars 2 was built with Steam Deck in mind.

This video is clutch in setting everything up, and if you're at all interested I highly recommend checking it out as well.

When I'm in the MMO, Guild Wars 2 feels like it was built with the Steam Deck in mind. Its painterly style pops on the small Steam Deck screen, and its audio soundscape really sounds incredible on the Deck's front speakers. It runs relatively well as well, with my framerates hovering in the 50s and 60s (with some dips into the 40s) for the most part, which is key to making sure that the MMO doesn't feel like a slog to control.

Running around the starting area of Queensdale has been a treat, with the MMO really feeling at home here. I'm not that far along, only about level 10, but so far my experience in Guild Wars 2 has been a real treat, helped by the fact that I can just lounge in bed in the evening, exploring the landscape and taking out rampaging centaurs with wild abandon. 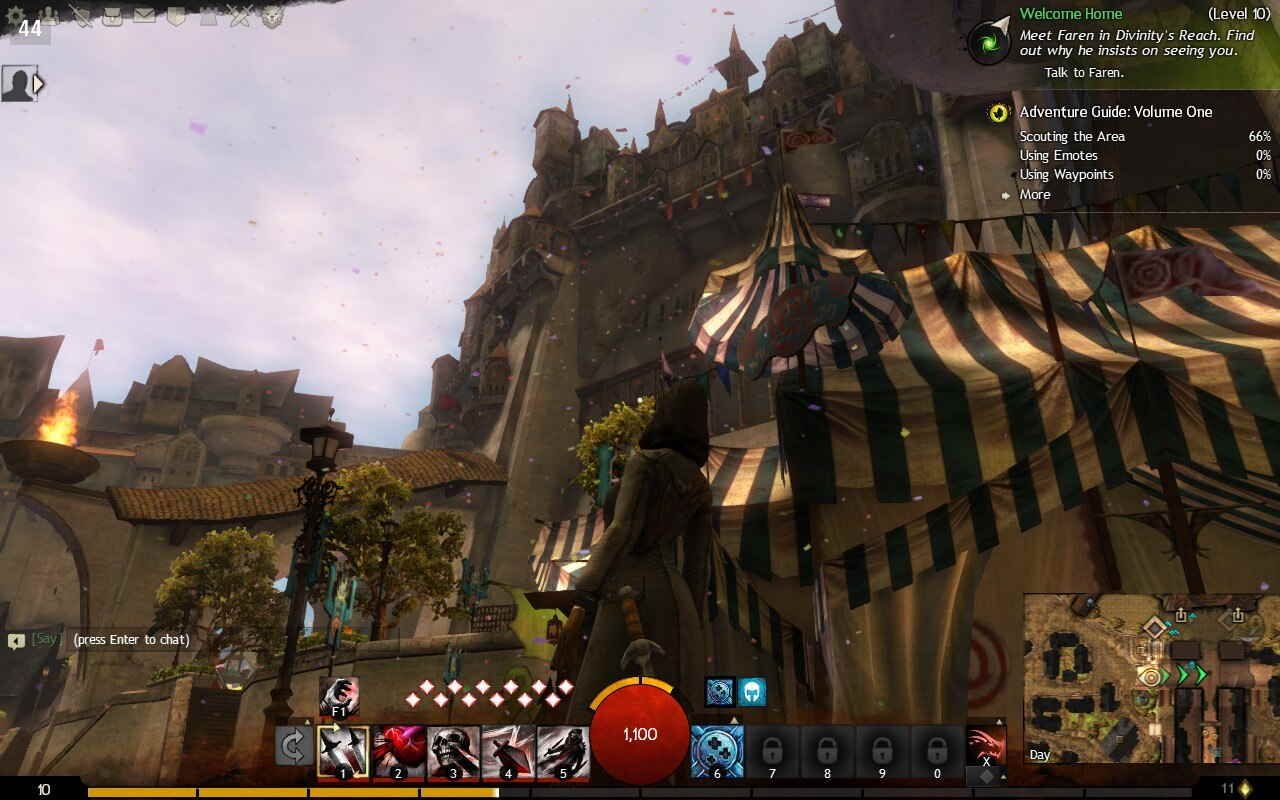 Those first moments walking into Divinity's Reach were awesome as well, the large, stonewalled city looking amazing on the Steam Deck screen. I feel the painterly art style lends itself well to working on Steam Deck, though the Deck is capable of some pretty great-looking titles running on it too.

It's not perfect, either. While the controls work, they aren't necessarily going to replace the mouse and keyboard controls the MMO has been primarily built around, and I do feel like I might be slower to the draw than I would be otherwise. In world events that have dotted the landscape, I felt a step behind the rest of the players around me as I tried to remember the correct button combination just to use the fifth skill on my bar.

I remember feeling this way in Final Fantasy XIV when I was transitioning from PC and PlayStation 5 as my primary platform there, necessitating the use of the controller to play. But with time it became second nature, which many of the quirks of this community layout already do for me. Time will make this better, and hopefully as we move forward we'll see a native control scheme from ArenaNet and official Steam Deck support come down the pipeline.

As it stands now, I'm pretty sure this will stay my go-to MMORPG on the Steam Deck. While The Elder Scrolls Online and Final Fantasy XIV are great on here, and EVE Online is serviceable enough to make it a great platform to run my ore mining operations, Guild Wars 2 is the MMO I'm finding myself pick up my Steam Deck day in and out to play the last few weeks. I can't wait to get even more time in here, eventually playing through the excellent End of Dragons expansion, with Cantha in all its glory emblazoning the small Steam Deck screen while I'm lounging in my backyard around the Chiminea, or laying in bed finishing a few quests before calling it a night.