The golden age of MMOs introduced us to life-long friends and a world beyond the one we knew before. They offered a place where every minute spent online would count for something, and those spent away from the game felt like time wasted.

Now it’s clear why those first few sentences are problematic in today’s age. As much as games can be an escape from real life, they shouldn’t have to take over your life to feel worthwhile. But whether it’s due to the ongoing pandemic, the rapid accessibility of mobile clients, or a genuine need to escape the real world, the need and want for MMOs to consume our free time is apparent, and it’s not just down to the old dogs to do it.

These are the five best economy-driven MMOs you can play today; the kind that won’t feel like you’re a ghost floating around a bustling city, where your input directly influences someone else’s experience, and equal opportunity is out there for those who seek it.

There’s no getting around it. EVE Online  is by and large a player-driven game. Anything that happens here is either the fault of a lone wolf, a band of rogue agents, or an entire alliance looking for fame and fortune.

It’s certainly not going to scratch the fantasy itch of the average MMO player, but there’s a reason EVE Online is one of the most enduring examples of a player-driven economy MMO to this day. An unchanging haven where wannabe leaders can read the room (or universe) and make informed financial decisions with long-lasting effects. The game just can’t function without its inhabitants harvesting resources, building intergalactic war machines, and coordinating grand expeditions to ambush others just trying to live their lives; though who’s to say today’s random target isn’t tomorrow’s Darth Vader of EVE Online?

This piece of gaming history is an incredibly difficult title to pick up on a whim. It takes patience to learn; so much so that a  finance and economics degree wouldn’t go unused. But regardless of your individual skill level, those who persevere through its dizzying collection of UI panels and windows often find life-long friends and a satisfied sense of adventure. Participation is key to its evolution and, without it making many major gameplay pivots since its introduction over 17 years ago. this truly intergalactic lifestyle simulator somehow gets more appealing as time goes on.

The driving force and inspiration behind this article, Albion Online is seeing a boom during the ongoing pandemic. We can attribute its growth to any number of things; like an increase in free time or the new Chinese/Korean localization, but news of a single player wiping out the coffers of an established guild in one of the game’s most prolific “long cons” is where I’d like to pin the blame.

It was an event that made headlines across games media. Today, that kind of behaviour could be grounds for GMs to get involved to essentially turn back time. But in Albion Online -- a game that’s built around the idea of sandbox survival -- espionage is a tactic encouraged through its want to be a living, breathing online world, and it’s a refreshing amount of freedom to be afforded in today’s MMO market.

Beyond that, the rules (or lack thereof) that allowed one player to escape with the fruits of the labour of dozens of others helps make Albion Online one of the increasingly scarce number of player-driven fantasy MMOs out there. Resources are limited, crafters and gatherers can turn to specialities to meet demand in the player market, and even damage taken can drive the supply and demand of equipment as it’s worn away in battle..

If you’re more of a merchant, using your time to export goods from low-value regions to those in high demand can be worthwhile investment. It’s not just about selling your own wares, but peddling those of tradesmen who need to focus on their local customers. And who needs companion apps to keep on top of the market when the entire client is playable on a mobile device?

Though not technically released, after years of development time, you can play Crowfall right now and into release if you buy one of its Founders packs. It’s a beta-based technicality, and that just about affords it a place on this list.

Crowfall is a crowd-funded MMO that made the rounds years ago for its lofty promises. Hardcore PvP players were enticed by its ideas of timed conquests, but after years baking in the oven, what has emerged is a game that’s more than just Mount and Blade without the mounts. The focus on large-scale PvP and “fighting for a throne” means resources to aid in a server-wide war effort are at the forefront of the experience. 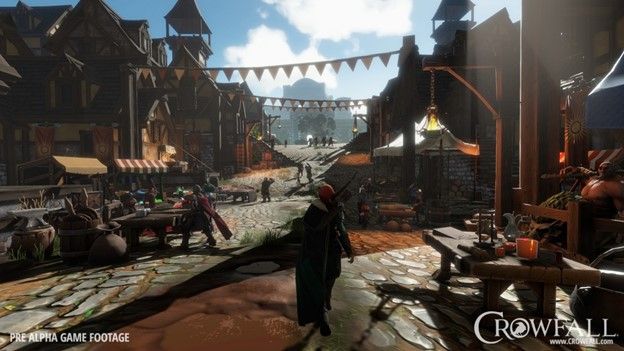 There’s no war without equipment, and its player-driven economy is behind its inevitable issue supply and demand. Just like how the British Government encouraged its people to help turn their old pots and pans into planes for the war effort, the people of Crowfall are encouraged to pitch to help their side fight for their fate. After one campaign is over, the victors pillage the land, claim the materials of their enemies, and put them to use building a defense for the next time war breaks out in the land.

If you can get past a fairly dubious Steam listing that paints it as a free game that’s little more than a trial run, Wurm Online is a legacy sandbox well worth a look. Dating back to around 2006, it’s not going to make use of many modern technologies or systems, but perhaps that’s for the best. Google it and you’ll see it’s self-proclaimed title of the Ultimate Sandbox MMO -- but that’s something we’ll let you decide.

Just by being accessible for so long, Wurm Online has stood the test of time. It’s not going to shower you with thousands of water droplets, making a spectacle of a sea monster ruining your innocent fishing trip as it emerges from under your pitiful boat. But what you will get is a sense of freedom -- so long as you’re willing to pay the monthly fee to unlock its otherwise relatively low level cap.

It features gameplay not unlike today’s flock of survival sandbox games; “tamable” land leads to additional servers being implemented to give fresh experiences for newcomers, and players are free to master any and all disciplines they like. With enough time and effort, you’re able to become a completely self-sufficient player by mastering its 130+ skills. A hermit, if you will. It’s not a life for everyone, but if you’re after complete autonomy and the ability to leave a visible mark on your server’s economy, Wurm Online is an often overlooked piece of history that deserves a second opinion. Enabling the risk of a PvP server and the political tension it can offer should give the greatest example of its player-driven economy,, but if you’d rather live a solitary or social life without fear of highway robbery, PvE-only servers are available.

The introduction of the Grand Exchange sapped Runescape of some of its charm (grind), but with 76% of Old School Runescape players willing it back into existence, it’s clear the vast majority of today’s MMO playerbase doesn’t mind that particular time-saving effort. After all, it did introduce another hub for players to convene in, creating a more reliable place to strike up conversation and buy direct -- like overhearing someone selling a game or console at a store and one-upping the establishment’s shorthand offer. I’ve been there.

Runescape was, for a younger me, at least, the greatest implementation of an MMO marketplace around. Social interaction was a must, and back before indirect trades were a thing, you’d have to travel the world and back and hit up local gathering spots to get the best deal on crafting materials, new armor, and weapons potentially stolen from your PK’ed cousin.

Though there’s no longer a need for an unofficial map of trade spots in World 2’s Falador Market, players can still can score better deals by hitting up the source of the material, and sellers can do better than slinging goods on the Grand Exchange by “merchanting” locally-gathered items further from home -- like a true economy.

Stores in Runescape rarely offer truly useful goods, so it’s up to the game’s population to harvest, craft, and hunt down valued loot like Dragon Bones and consumable runes used with each spellcast. Death out in the field means losing a large chunk of your inventory, creating natural supply and demand. And with the mega rich often betting it all on a coliseum-style duels out in the desert, cash is never far from being injected back into the market.