Not sure about everyone else, but I’m waist-deep in plans for the Dragonflight launch. Expansion launches are always an exciting time, but not everything always goes to plan. With this in mind, let’s cover some of the basics in preparation.

When does Dragonflight Launch?

This time around Blizzard is going with a global release, so everyone will have access to all the new content at the same time. Depending on your time zone, this maybe a good or bad thing for you. The official launch date and time is Monday the 28th 11:00 pm UTC. To help players figure out what time this is locally, they’ve provided a handy map showing various time zones. Even if yours isn’t specifically listed it should be fairly easy to figure out the exact time for you. 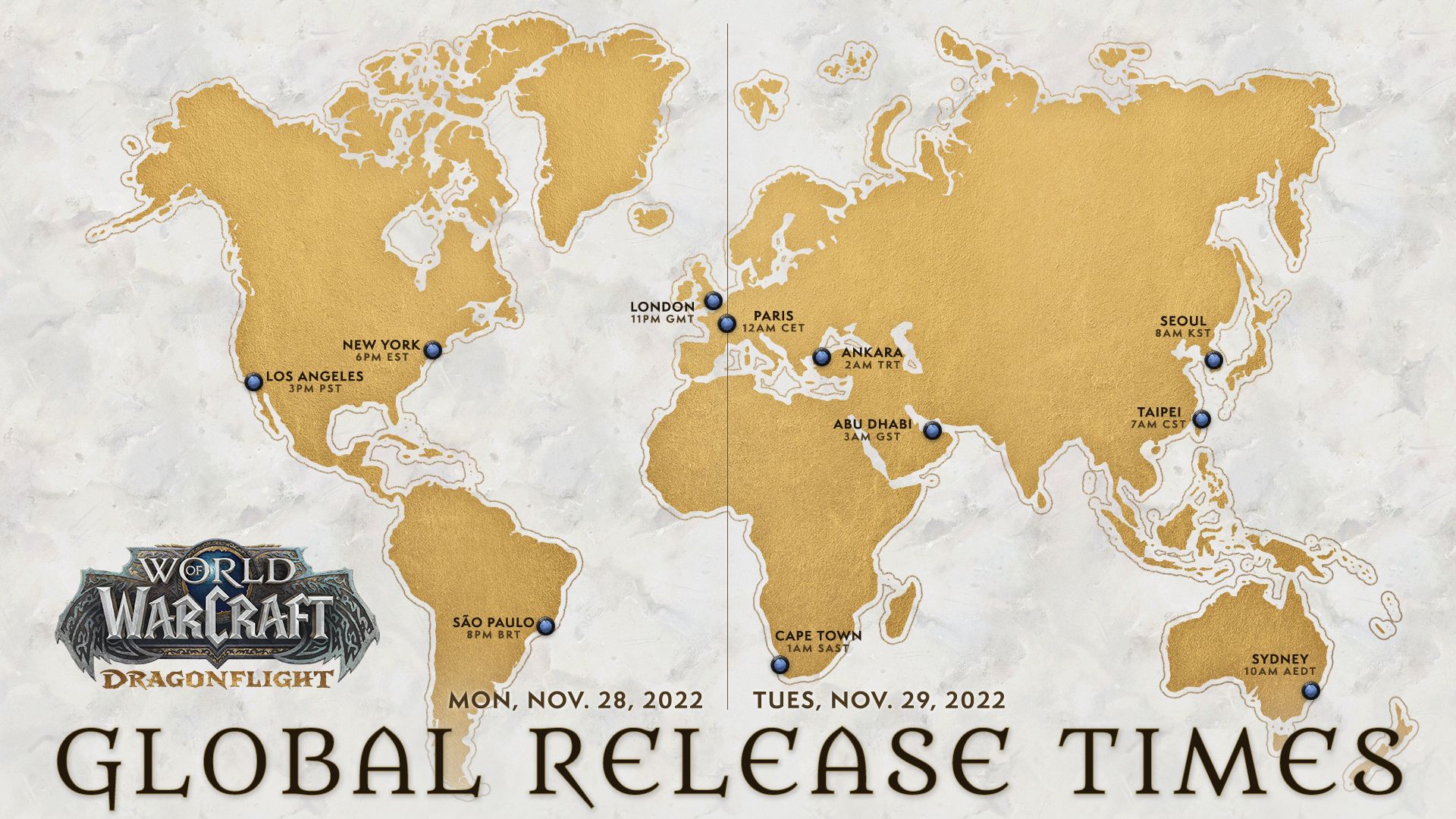 Prepare snacks and have them handy!

One big rule of thumb during an expansion launch, especially if you plan to play for a long session, is to prep meals and snacks ahead of time. Only needing to heat up something rather than cook a whole thing will cut down on time away and your chances of getting afk logged out. Running back and forth between your stove and computer to jiggle your mouse isn’t much fun. Though if you are trying to get more steps in, it might be worth it. Additionally, having plenty of snacks and drinks handy is a huge help. That said, also don’t forget to stand up and stretch from time to time.

Gone are the days of needing to take the servers down to bring up an expansion, so it’s a good idea to log into WoW as soon as possible. Assuming everything goes to plan, all the DF content will be enabled without the need to log out or reload, and level 60 players will have their XP bars show up again. Rather than having every player flooding the servers trying to log on at the same time, it’s a good idea to hop on at least an hour or two beforehand if you can.

There will probably be login queues.

For everyone who won’t be able to log in ahead of time or who gets hit with a dreaded disconnect event, queues will probably be a thing and quite high. Blizzard has done a lot of work over the years to lessen the exitance of queues, but expansion launches always see them return, at least for a little bit. The only advice I can offer here is patience. The queues in WoW don’t tend to be too bad, and as long as there isn’t a bug that causes players to be dropped from the queues randomly, they should go fairly quickly. If you have a second screen, queues are a good time to watch something else while waiting.

Take care of your addons.

With the beta cycle, a lot of addons have been updated ahead of the DF launch, but they are also normally updated a ton right after launch as well. So, you’ll probably want to check on updates before you login for the next week or two. Some addons will also likely be broken as well. Heck, there’s been times that I’ve updated an addon right before logging in, and then five minutes later, I’ll be hit with a notice to update it again.

Hotfixes and server restarts are likely.

With the more focused alpha and beta cycles this time, hopefully, the number of huge urgent issues discovered after launch will be minimal. That said, there are always problems that just don’t become apparent until a large enough number of people try to do them. Most of the time, with hotfixes, they don’t need to restart the servers. However, there may be things that come up and require it. Keep in mind, when those happen, most everyone will be trying to get back on at the same time, so more than likely, there will be a queue to get back in. On the upside, we generally get advanced notice when the servers need to be taken down and for how long.

Maybe hold off on starting to level some?

With all the potential issues caused by an expansion launch, sometimes the best strategy is to wait a bit. I’ve often done this and found it did mean I missed out on a lot of the pain of the expansion launch rush. Plus, letting that first wave of players scurry by also often makes for a better experience overall. Unless you are a hardcore gamer who needs to get a horde of characters to max level and raid-ready asap, waiting might be the better part of valor for you. After all, season one doesn’t start for two weeks, so there’s plenty of time to level and gear up, especially if you are only getting one character ready.

I hope some of this will have been helpful and the Dragonflight launch will go completely smoothly for all of us. See you in the Dragon Isles!