It’s pack time yet again the spiral of Wizard101, and this time, we’re taking it back to the dino age ..again! The Primeval Hoard Pack has made a crash landing into the spiral, and the brontos are running rampant! This pack features three sets of gear, with matching bronto mount and frillasaur pets for each! With some snazzy gear sets with this gear, we have a bunch to crack open - so let’s start!

To start, let’s take a look at the gear! Have you ever wanted to run around the spiral as an imitation of a fossil? Well, do I have just the set of gear for you. All joking aside, these sets of gear have their strengths and weaknesses in the stats department.. The stats on the robe are great for tanks, and the hats/boots can provide a good boost of critical and damage boost for your hitting needs. 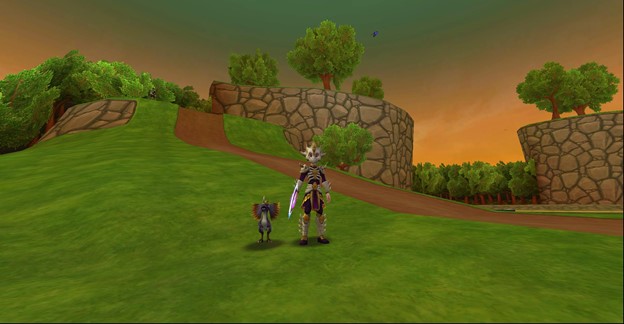 There is one glaring negative to these new sets of gear, and that is besides the robe, there is no other resist stats in these sets of gear, so you may want to mix and match other pieces of gear with these. Last, but certainly not least, the stats on the wand are pretty on par with other wands from other packs - so while not a must, it is a nice option to consider!

Next, let’s take a look at the more cosmetic inclusions in the pack - pets and mounts! The pets are some frill-tastical looking Frillasaur pets! While they don’t offer many exciting talents, the looks are on brand with the dino theme of the pack, and can also contribute to the set bonuses the gear sets offer! Alongside that, there are 3 mount variants of the Bronto mounts! Each mount is 40% boost and 2-person seater, so team up with a friend and get your prehistoric party on!

Also in the pack, we have some “filler” items, such as housing items, treasure cards, and reagents. Nothing too notable is in this section, as many of the housing items in this pack already have been in the game in other ways for quite some time now. It is pretty unfortunate that there seems to be no new housing items for this pack, as most packs in the past usually have many new housing items, and can make or break a pack. Finally, let’s touch on the most intriguing part of this pack: the item sets!

With a recent update to Wizard101, they introduced item sets, which provide additional stats depending on how many pieces you are wearing of a specific set of items! In this pack, each set of gear (robe/hat/boots, wand, pet, and mount) have an item set, which could provide some interesting situations! The 2-set is the easiest to achieve, by just using the pet and wand for example, and provides some additional damage boost for your wizard. As you progress higher in the item set, you will unlock additional stats such as stun resist, pip chance, and a good chunk of universal resist!

Overall, this pack has some advantages, but also has some glaring downsides with the gear. The theme is also one we’ve had a few times already with the dinos, but it isn’t a bad theme by any stretch. And as always, packs provide a chance at obtaining the items, so spend responsibly, and hope all you readers get the item or items you’re hoping for most in this new dino-mite pack!