Warhammer: Odyssey, the mobile MMORPG by Virtual Realms, has had its soft launch. It has the aesthetic of the Warhammer setting. But how does the game hold up to being a full MMORPG? How much do typically mobile practices impact the experience? You may be surprised.

Warhammer Odyssey has been out for a month now, and the first thing I will say is that Warhammer: Odyssey has nailed the look of characters from the Warhammer universe. While the graphics appear somewhat basic due to it being only available on mobile devices, each class has a unique flavor/feel. Yet, the underlying mechanics between each is similar enough that players can easily swap between at lower levels.

One thing I liked, on a base account, you can make two characters per server. By spreading characters between servers, players can try the six different classes without initially spending money. 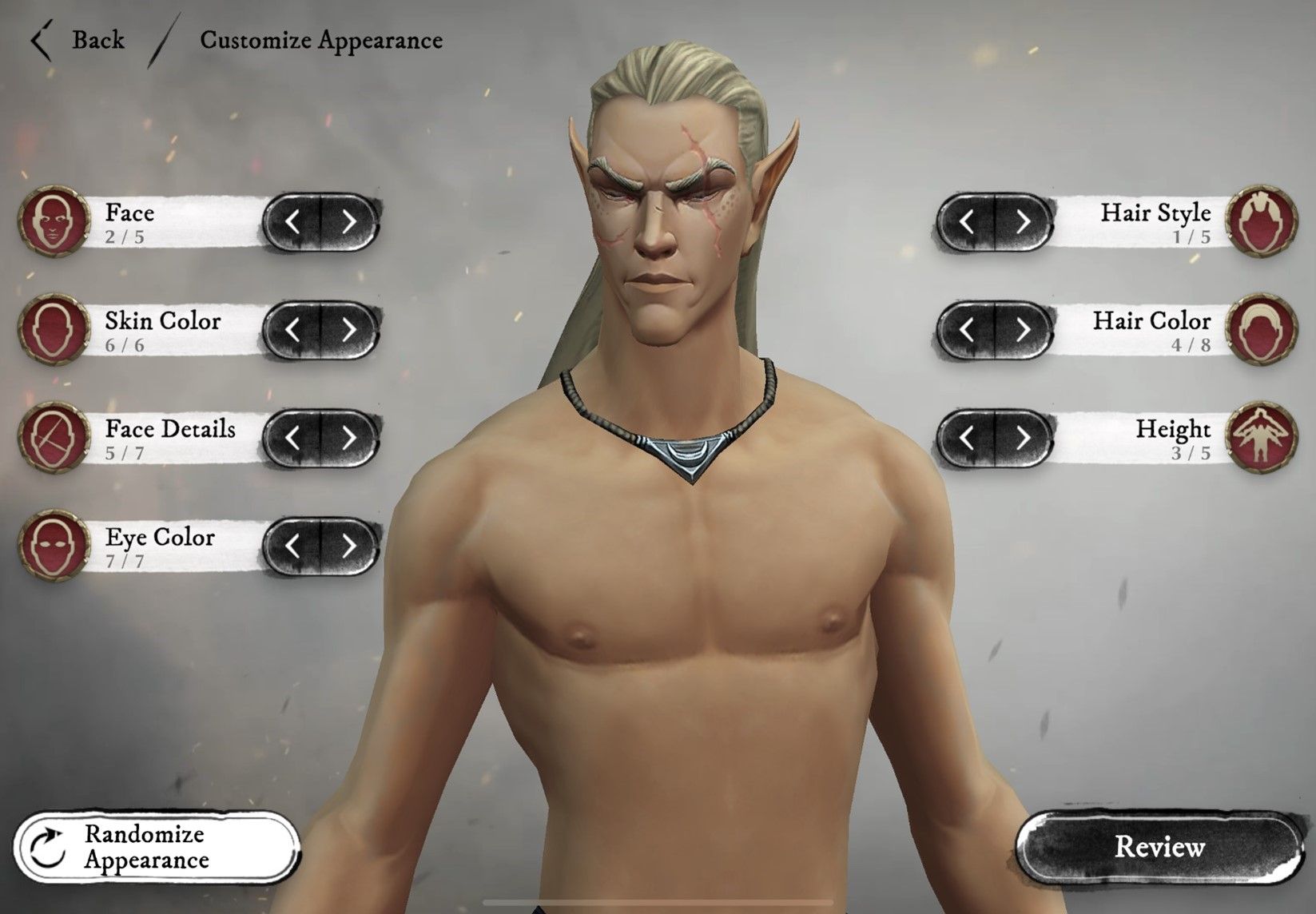 Warhammer: Odyssey's character creator is decent for a mobile game. While it only has limited appearance options, there is enough here that your character will not be a carbon copy of everyone else. It was also great to see the option to choose male or female models for all the classes.

Each class has two specializations that they can choose from at level ten, which will determine your role/playstyle for the rest of the game. So far, I have tried out four of the game’s six classes up to level ten and can say that each one plays differently enough that it took me a while to find my favorites. 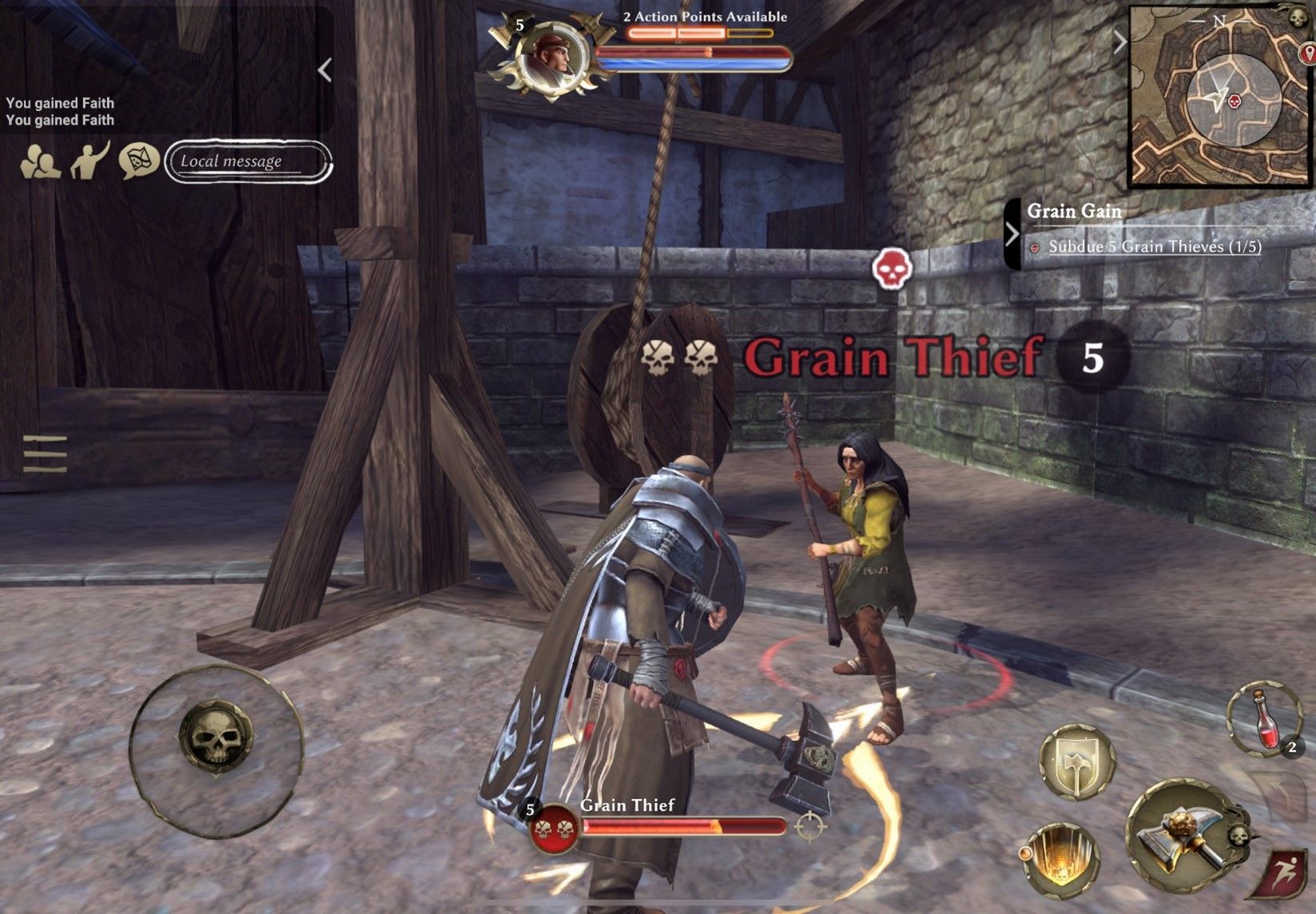 Some classes are easier for solo play, while others I felt needed, at least, a partner to complete some of the quests. I have found Shadow Warrior to be one of the best classes for soloing along with Warrior Priest. While the Archmage is more difficult when facing stronger enemies, but does have a quicker kill time. Certain classes also do feel like they need a bit more balancing by Virtual realms.

The team at Virtual Realms has also done well creating the game’s environments. These areas range from the streets of Marienburg to the forest surrounding it. As you progress on your adventure, you will run into various enemies that include street thugs, spiders, pirates, and wolves during the first dozen levels. You will also get a chance to interact with several NPCs and a few main characters in the city that are mainly present to drive the narrative forward.

Sound effects do a decent job, and while I found the music a bit off at first, once inside the city, they all fit the area quite well. Once in a while, though, I would get a sound effect or bit of music that just sounded off, for example, footsteps that didn’t match up well while crossing an iron bridge in the sewers.

The storyline itself grabbed my interest right away during the tutorial but then lost steam during the first eight levels. Thankfully, after your first so many basic MMO-style quests, a larger plot begins to emerge. All quest information is imparted to you via quest text so be prepared for a lot of reading. Unless you want to skip ahead by accepting the quest and figuring out your objectives through the quest tracker. 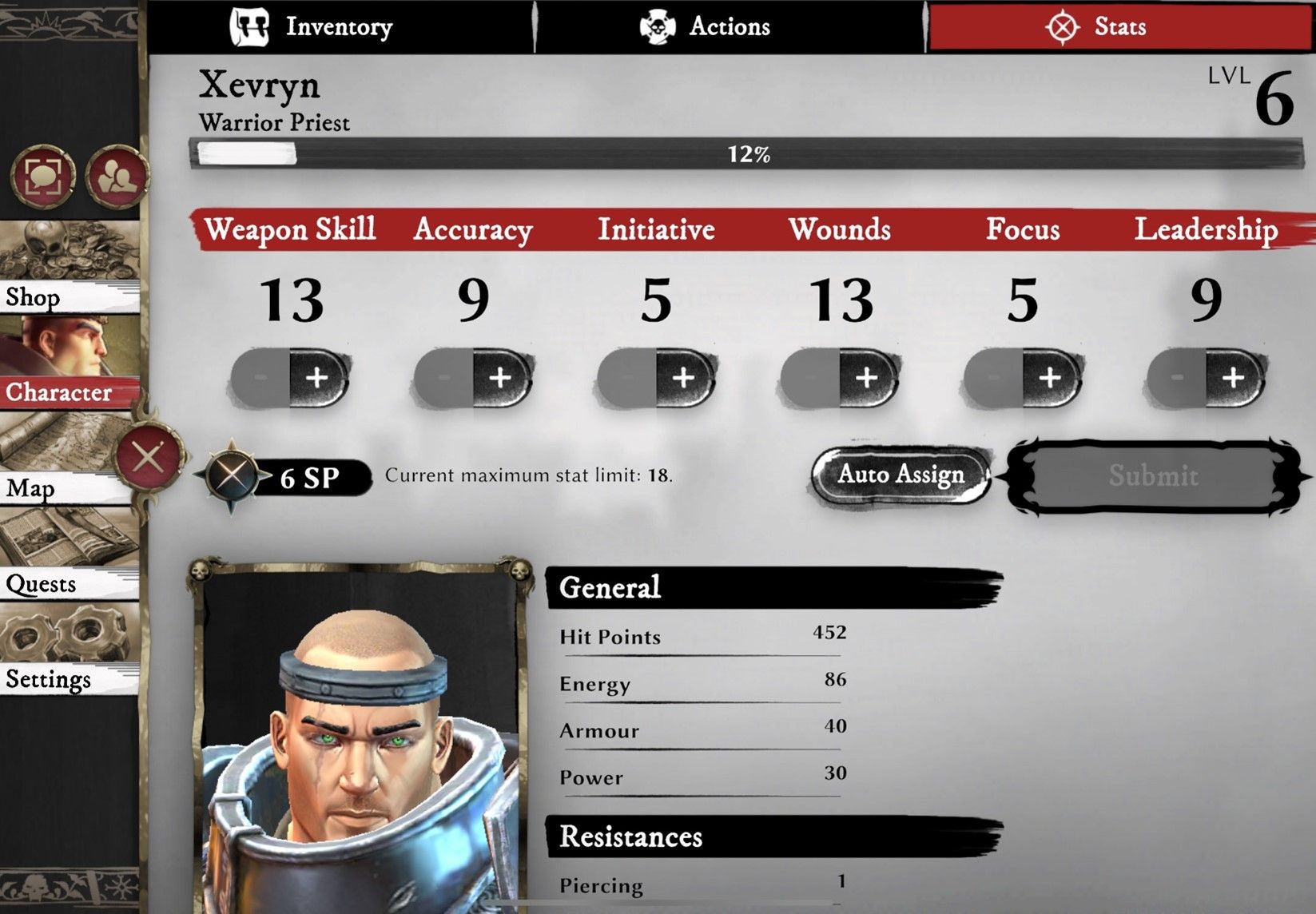 Much of combat involves holding down your resource generation ability for at least three attacks, for example, the engineer builds up scrap by using their rifle or hammer/pistol attacks, then uses the said resource to power or enhance abilities that you have unlocked/improved while leveling. Character advancement is a straightforward system where you gain AP (ability points) and character stats per level. Character stats can be allocated manually if you would like to fine-tune them or by simply clicking on the auto-assign button.

I am happy to say that the game contains no autoplay or autorun like so many other mobile titles. You do have to play the game. The closest to autorun that does exist is that when you tap an ability, your character will run over to a target if they are close enough. This auto-targeting has gotten me into trouble a few times when I meant to go talk with an NPC. This was mildly irritating until I got used to tapping on the NPC to target them before hitting my action button.

The in-game store is pretty sparse for the most part, with two types of currencies: sovereigns, which you buy for real money, and guilders, you get a bonus currency for spending/buying sovereigns. The types of items you can buy include AP respec, stat respec, regiment banner (guild charter), character slot, backpack expansion, bank expansion, auction house slot, and experience potions to speed up-leveling. At this time, there are no featured items listed or special offers, which has me mildly concerned. The prices so far seem reasonable, and for the amount of enjoyment I am getting, I don’t mind dropping $8 to $14 to unlock another character slot or some additional inventory space. 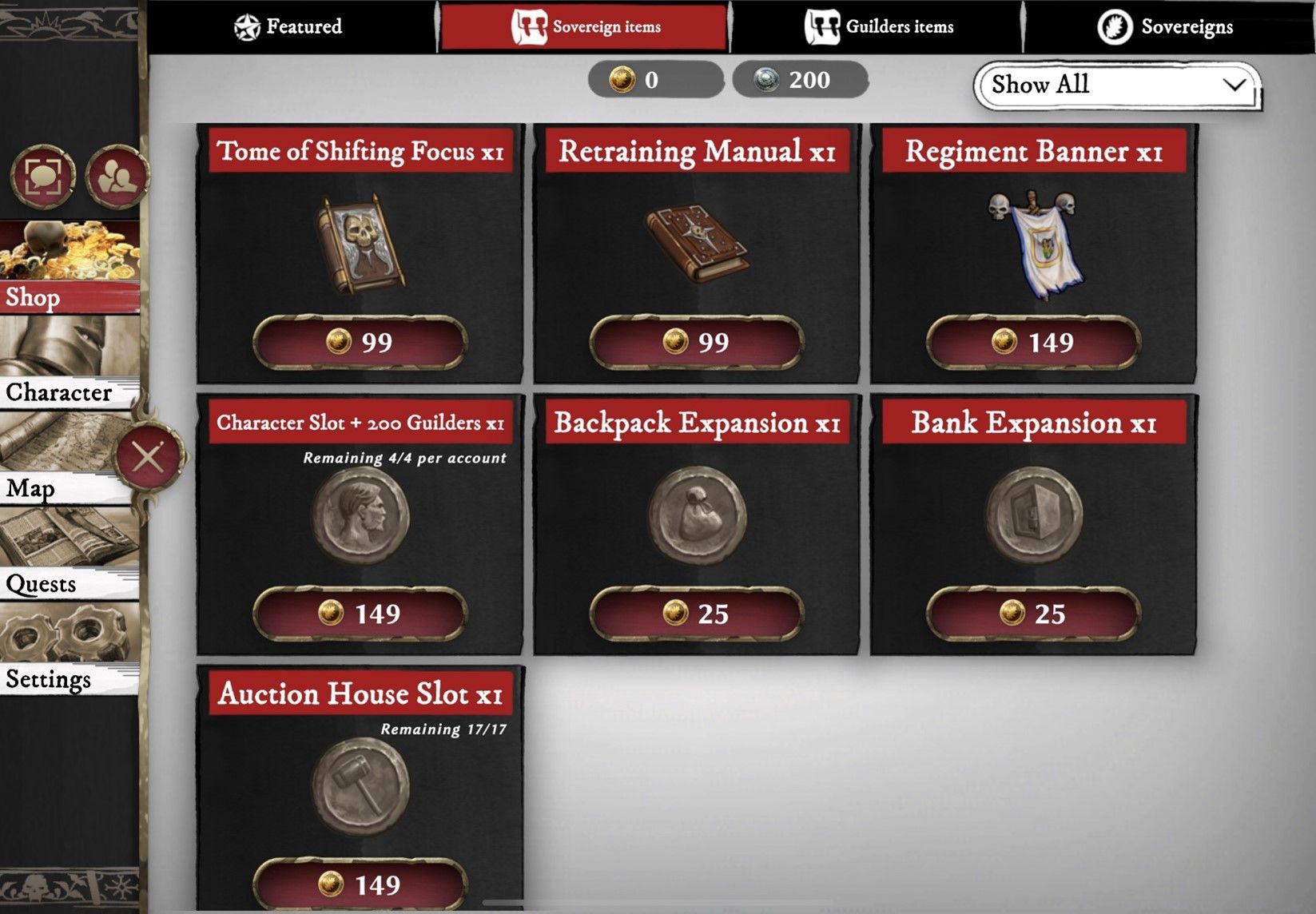 I ran into very few bugs while playing Warhammer: Odyssey so far, and the game has been stable. You will encounter some NPC pop in, and every so often I encountered an enemy that would not take any damage from attacks. After some trial and error, I found that luring them down a hallway or around a corner typically corrected this problem. I also had some issues loading up the game on my iPad without going out and completely restarting the app. There are two issues I expect most players will find to be the biggest problems/bugs. First is the respawn speed of certain mobs, and second is falling through the world every so often when trying to cross the final bridge in Marienburg before you can move onto the forest zone.

As a reader, you may have noticed a theme so far where I have indicated that aspects of the game have been done well, decent, or are rather basic. Warhammer: Odyssey currently feels like your basic MMORPG, you move from one quest hub to the next and pick up the available quests to complete. Rinse and repeat as you move through the content. It currently has no spark that steps outside that defined formula and keeps you coming back for more. Combat feels a bit slow, and I don’t feel engaged when using my character’s abilities. While being a mobile title does make it easy to pick up and play. This lack of engagement will eventually need to be addressed for the long-term health of the game.

Changes and QoL improvements that I could see increasing player engagement might include the following. Turning the basic attach ability into a toggle that shuts off when your target dies. Tap and drag slotted abilities onto a target to activate special attacks and spells. Give the UI one or two dedicated consumable slots. Finally, allow players to unlock dual spec through gameplay, or via the store, so they can swap roles easily even if their stats are not optimally allocated for a secondary role.

Even though this is currently a rather basic MMORPG on mobile, I think Warhammer: Odyssey has the bones of what could be quite a fun game. As a free-to-play title, it is worth your time to at least have a look if you are interested in a Warhammer-themed MMORPG with a limited cash shop. While I am looking forward to seeing how Virtual Realms improves the game over time on its way to a full launch, I also still have mild concerns about what form the cash shop will eventually settle into.