Back in June 2014, just a few short months before release, Activision revealed that the original Destiny would set them back around $500 million. It’s one of the most expensive video games made. But with the predominantly PC-based MMO market feeling like a shell of its former self, what possessed the company to bet big on a formula that history had chewed up and spat out time and time again?

Maybe it was inspiration from a few like-minded games that came before, with the folks behind Halo deciding they have the experience (and funding) to do it right. Or, most likely, it was simply publishers interested in stretching the explosive multiplayer shooter genre out into something they could build upon over the years rather than churn out and market a fresh new title every 12 months. Whichever path you believe to be true, these are the games that did Destiny before Destiny did it better.

It can seem as if Hi-Rez studios latch onto whatever is trending at the time. Smite came long into the MOBA boom, Paladins wadded into Overwatch’s team-based shooter territory, and Realm Royale went down Fortnite’s road by spinning off a Battle Royale feature from an already existing title. 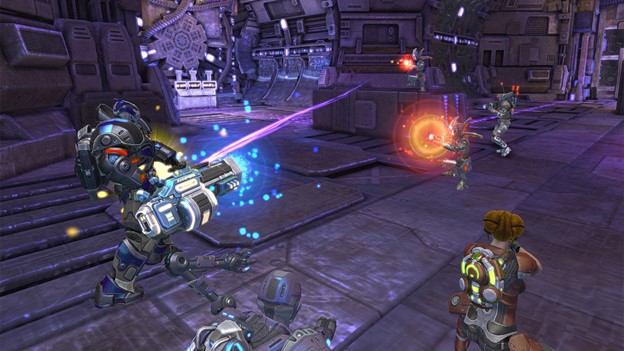 But before all that, the company tried their hand at an MMO. Not your typical fantasy world of wizards and dragons, but a class-based shooter set across a desolate wasteland populated by sentient machines. The PvE quest zone outside the main hub wasn’t anything to write home about, but its dungeon runs and timed defense raids against hordes of gun-toting machines were chaotic romps with friends that felt like something you’d find at the arcade. And yes, it had jetpacks.

Healing your friends by way of friendly fire is a mechanic that still doesn’t get enough love today, and toggling between that and a damage boost on a tank taking on dozens of mechs with a gatling gun just made your whole squad feel godlike. I can’t tell you much more about the story, but with gameplay that is satisfying, there are similarities to draw on how most people enjoy Destiny today -- an incoherent and unfathomable story that sucks you in with combat that effortlessly scratches an itch.

After dropping its subscription model like many other MMOs of the time and reworking its world akin to A Realm Reborn, Hi-Rez’s efforts still weren’t enough to get the game the recognition it deserved. New content dried up barely a year and a half into release, and while a PvP-based sequel was in the works once, signs point to this eventually becoming the team’s Overwatch competitor Paladins: Champions of the Realm.

Global Agenda is still playable today. At least, that’s what I would have said had it been true. Despite the servers remaining up long after the developers shied away from active development, the game was delisted from Steam years ago without my knowledge, with a 2018 company-wide server move killing it off for good. There go my plans for the weekend. 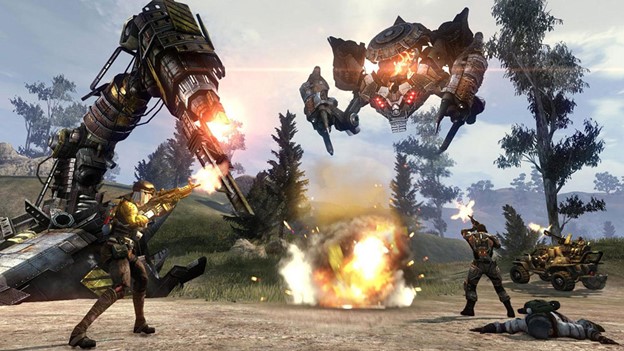 Here’s one that really tried to tap into the multi-format style of game development. Potentially spurred on by early talks of games like Halo and Gears of War getting the live-action treatment, Defiance actually managed to beat both big-budget titles to the punch in that regard.

The game, managed by Trion Worlds of Rift and Trove fame, released alongside a live-action show on Syfy starring Julie Benz and Ugly Betty alumni Grant Bowler. The star’s likeness appeared in-game, giving players a chance to coexist in the show’s universe, shooting insect-like alien invaders and following the show’s cast around the map. Though the show went against the expectations of many to get a three-season run, the game ultimately outlived its gimmicky hook, and still continues to this day -- albeit in two forms. For reasons unknown, this game’s modernized update Defiance 2050 exists alongside the original, essentially splitting the playerbase in two.

So what’s the deal with the two versions? Other than a class system in place of the loadout switching from the original, it’s largely the same, it seems -- you ride around a mostly empty world, blast through enemy camps, team up for any boss monsters you come across, and complete the odd quest to progress whatever sliver of story remains. Just expect an expanded narrative in the newer version that isn’t tied down by the TV show.

Mobs are generally massive bullet sponges, so if you’re looking for non-stop mindless monster shooting and damage numbers spilling out of here, there, and everywhere, Defiance is one of those simple, grindy MMOs to pass the time with. Just don’t expect many major updates or achievable server-wide content.

Finally, we move onto a game that sadly didn’t manage to hold far beyond Destiny’s saturation of the market it tried to enter, despite being one of its closest counterparts. Firefall, by Red 5 Studios, is a vacant memory to me. I remember some very early footage appearing online and bouncing off the beta after little more than an hour or two. Part of that might be due to the fact it didn’t move from closed beta to open until two years later, highlighting its rough development cycle. Looking back now, it’s something I regret not delving deeper into; like Final Fantasy XI before it became a bit too old to enjoy with fresh eyes. 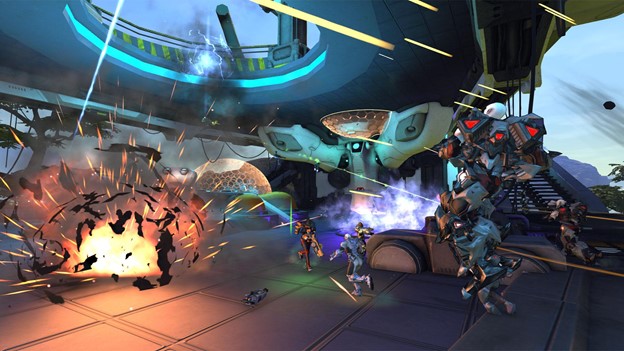 Firefall shared many similarities with Destiny’s combat loop. Jet boosters provided more vertical movement, players had access to three abilities on top of their weapon loadout, and a fourth ‘special’ ability that charged up over time. The only main difference here being the interchangeable Battleframe armor types that essentially allowed players to change their class at will. PvE consisted of events dynamically spawning in the open-world zones and various story-driven missions, with most end-game content revolving around instanced activities and currency grinds, and an on-going mission to keep mobs from taking over points on the map.

It all sounded great on paper, but the game ultimately released to mixed reviews in 2014. It’s average Metacritic score of 60/100 wasn’t all that bad, but changing perceptions when the core gameplay is the major point of concern for critics was likely too difficult to achieve. After stripping PvP outside of 1v1 duels following a $1,000,000 pre-release tournament to highlight its esports potential, Firefall likely landed itself into a bit of an identity crisis, confusing and potentially alienating those who might have actually enjoyed the gameplay loop had its potential been realized.

After all the trial and error it took to get Firefall released four years after its announcement, the game closed its doors just three years later. It was perhaps the closest thing PC players could get to Destiny until Destiny 2 finally came along four years later. We’ll never know what the future of Firefall could have looked like, but with Red 5 going dark following the game’s closure, things were clearly just not meant to be.