Before picking up Solasta: Crown of the Magister, I knew very little about it. I was aware it had been on Kickstarter, and it was an RPG based on D&D. Even though those two things are relatively minor bits of information to know about a game, I decided to check it out anyway. What I found is the most detail-oriented video game implementation of D&D I have ever played. Typically there are many compromises made when bringing D&D into a video game, but Solasta seems to have ignored those and instead focused on making every aspect as true to the core rules of D&D 5E as possible. 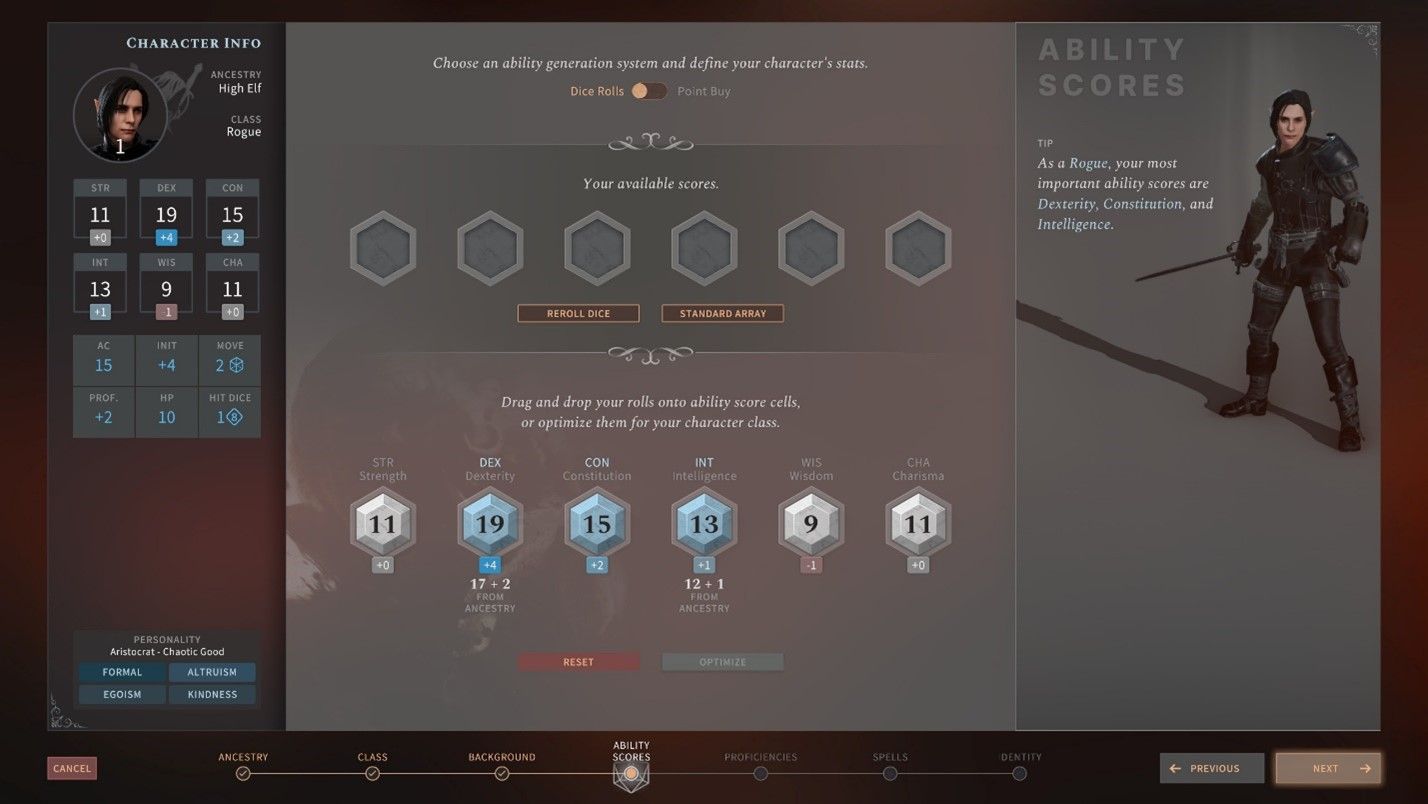 Starting up Solasta isn't a matter of creating one character and jumping right in. You need a party of four characters to play, so you'll need to either create four characters or pick four of the premade characters. Alternatively, you can mix and match both options. For example, for my first playthrough, I made a Ranger from scratch and then used the premade Rogue, Cleric, and Wizard. I tried to do a party of only three players, but I couldn't continue like that.

When it comes to creating a character, there are five options. Dwarf, Elf, and Halfling each have two variants to choose between. There are also six classes to chose from Cleric, Fighter, Paladin, Ranger, Rogue, and Wizard. You also can change the starting gear a character has and see what abilities a character can get at higher levels. This helps a lot if you don't know the classes very well and need help planning how the character will progress throughout the game. If I had a question about how a weapon worked what was in a priest's pack, all I had to do was mouse over the thing I was unsure of and a box would pop-up explaining it all to me. 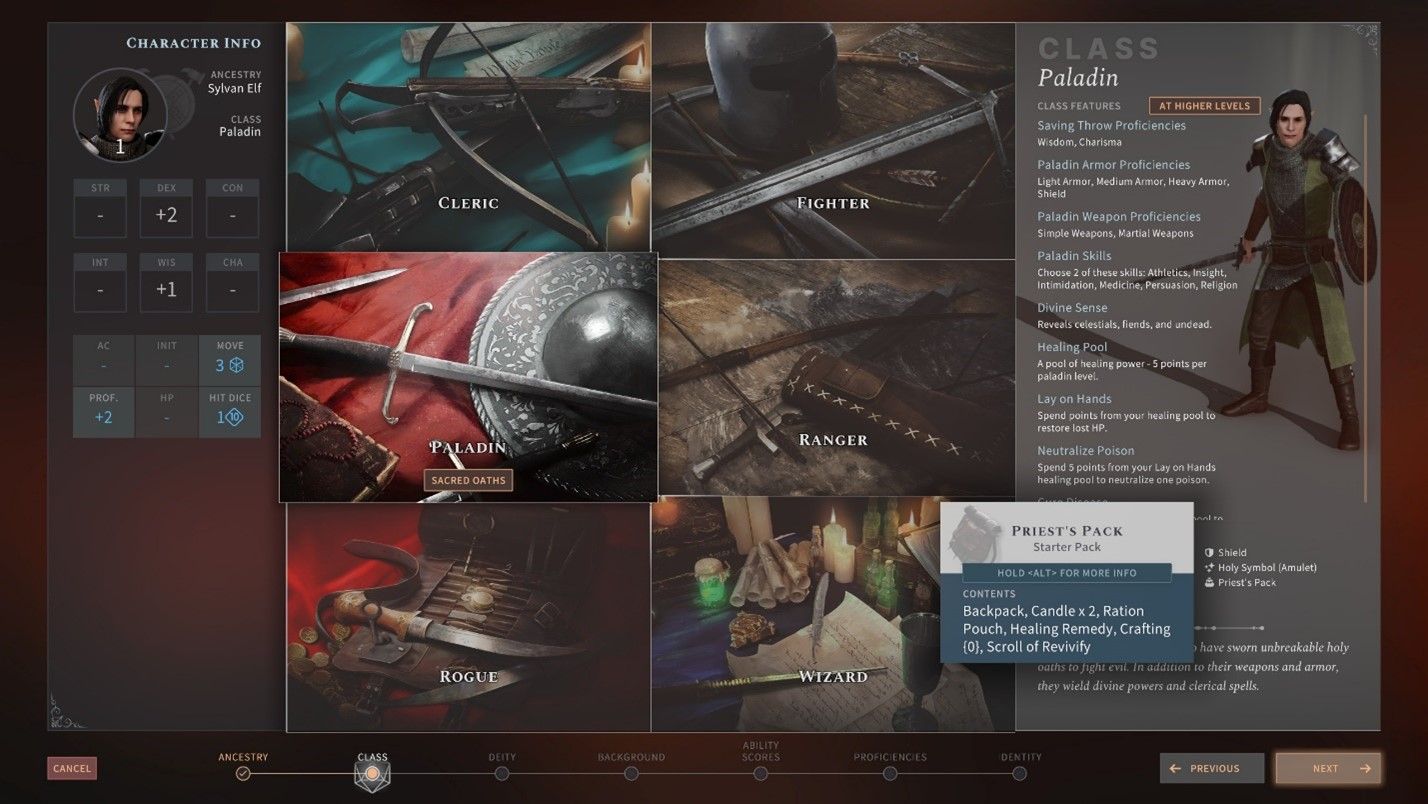 Backgrounds are where things start to get interesting. There are eight backgrounds available currently, and each background offers four personality flags, from which you choose two. For example, the Spy background provides the options of caution, cynicism, pragmatism, and greed. In most games, these choices would be for flavor, but in Solasta, these choices change how the character interacts with the world and how they react to everything around them. Additionally, there's an alignment wheel on the right side of the backgrounds menu, which will offer two more personality flags to choose from. I did have to pick two from the background and two from alignment, though. There's no mixing and matching between the two.

One of the fantastic things about Solasta is, as someone who has played D&D for decades, most of the character creation options were familiar to me. For anyone unfamiliar with D&D, this whole process might feel a bit overwhelming. Some concepts carry over if you've played other RPG video games, but some things might be a bit odd. For example, if you hover over a rapier, the infobox contains a "Effects on hit." Under that, there's a line that says 1 diamond with an 8 on it arrow damage. That bit of information can be incomprehensible to someone unfamiliar with D&D, whereas the rest of us would know it means the rapier deals 1 d8 (eight-sided die) piercing damage. There is also a properties description section on the upside that does mention specifically that it is piercing damage, so it isn't completely incomprehensible. You have to look into the details a bit more, though. 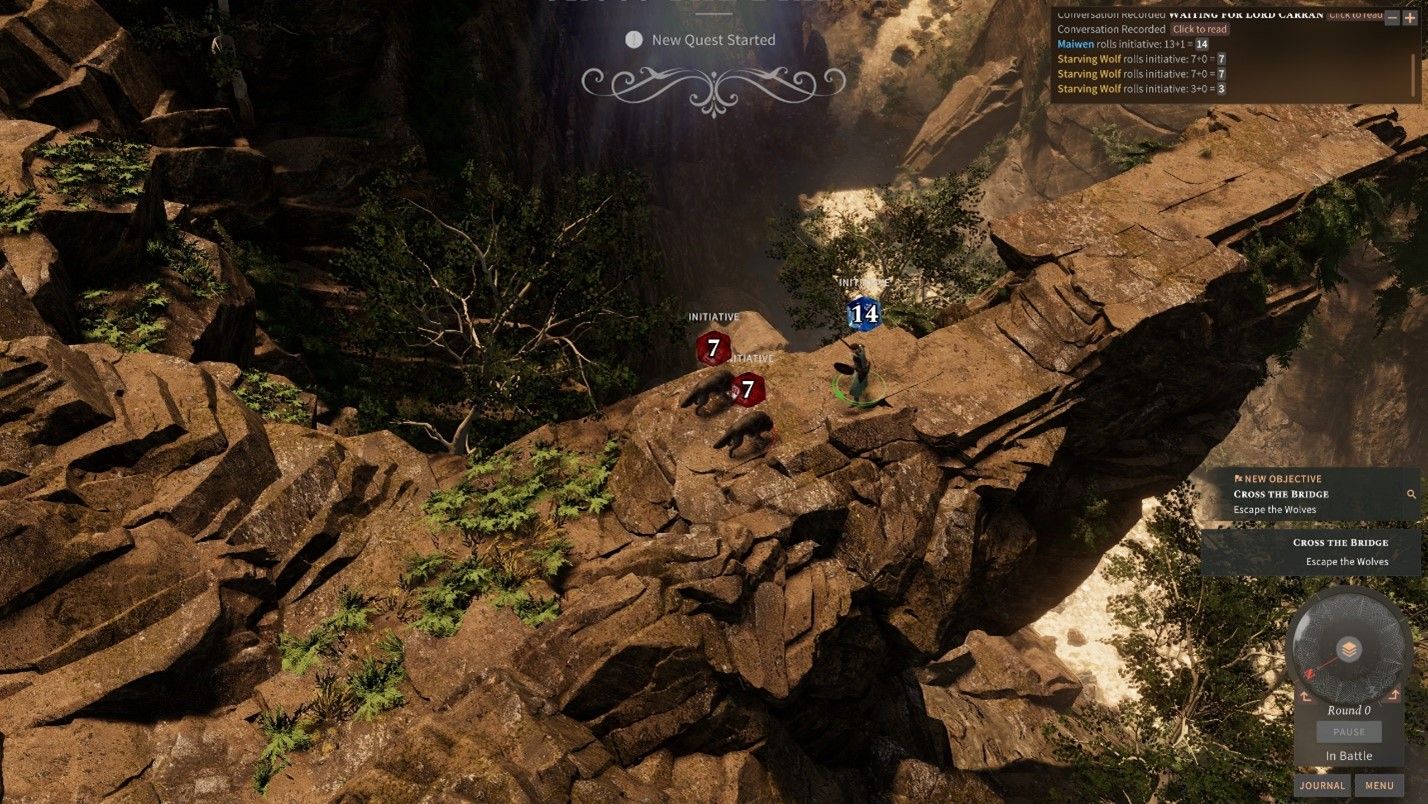 The first time I went through the tutorial, I was impressed by how well it was done. Each of the four characters tells a story about what happened to them as they traveled to the council meeting. Playing through each quick story was exciting and helped to teach the basics of how characters do everything in Solasta. Each story was perfectly suited to each character I had at the party (Cleric, Wizard, Rogue, and Ranger). At first, I assumed the intro stories would tailor themselves to the party I had. However, when I tried with a second group (Cleric, Fighter, Wizard, Paladin), the intro bits were the same. However, the Fighter ended up with the intro previously done by the Rogue, and the mission still required stealth to complete. Since Fighters aren't stealthy and aren't good with thieves' tools, this did not work well.

While I was disappointed that the intro missions weren't tailored to what characters I had in my party, I was happy to see that each character's different personalities did shine through. From the way they phrased what they said to how they thought things should be handled, there was a lot of variation. I most enjoyed my characters with "informal" speech patterns because now and then, they'd say something crude, and I'd have forgotten they talk like that which was always hilarious. 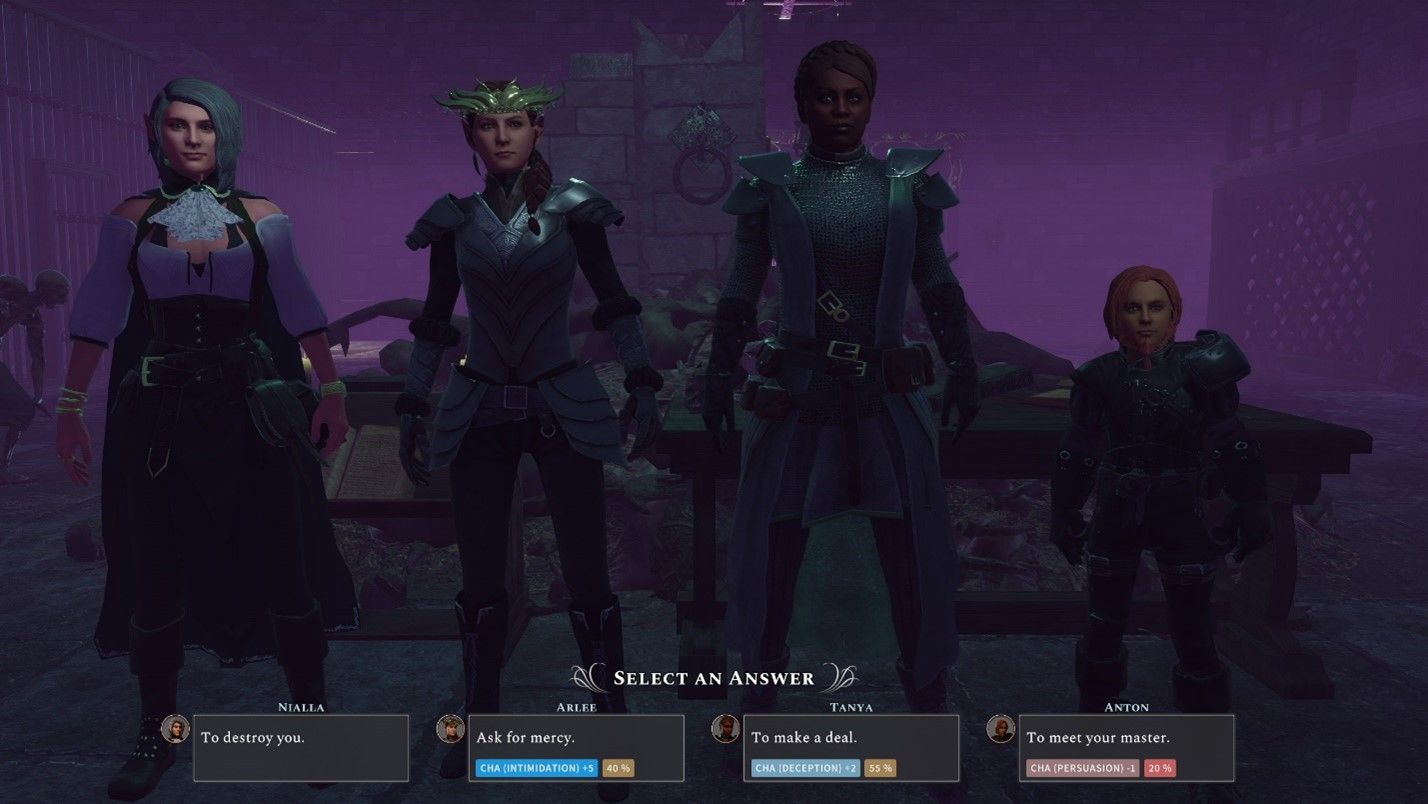 Conversations were always fun because every character always had a bit of a different idea about how to approach things. Most of the time, these differences were mostly adding a bit of flavor to the conversation. However, some conversations do have a real chance of changing how everything plays out. At the beginning of these conversations, my Cleric would always make an insight check. If she was successful, each of my character's responses would have a percent chance of success shown with them. This was hugely helpful in helping to figure out what course of action would likely work. However, sometimes she'd fail, and then it was all blind.

Travel time is a real thing that has to be taken into account while playing Solasta. Along with that is the importance of bringing enough rations with you. While traveling, sometimes your party can find enough food for everyone, but you can't count on it, and some areas seem like there isn't the possibility of finding food. Additionally, I was exploring an area, and I needed to take a long rest to heal and level my characters. However, I only had three rations (instead of four), so I couldn't take a long rest at all. The downside to this is rations weigh a fair amount, so it's a balancing act. 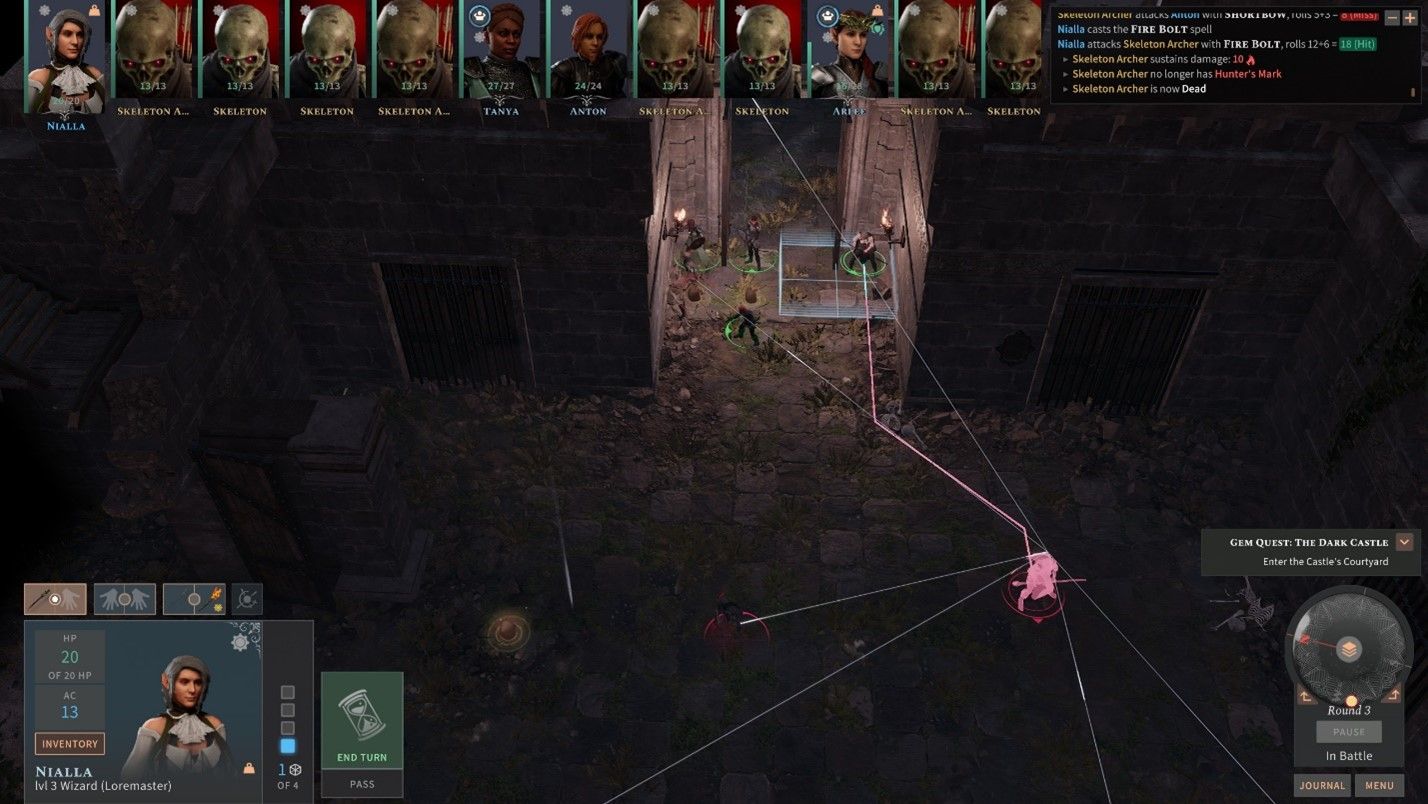 Combat takes place on a standard grid, and it's marked how far a character could move and what options for action they had. I also really liked mousing over a character on the battlefield or in the turn list, would pop up line of sight lines. This was extremely helpful for planning attacks and moving characters so they wouldn't be an easy target. I also like they've included actions like disengage, shove, dash, and dodge as options as well. Those are often overlooked combat options, but they can be a huge help when trying to be tactical. Disengage, in particular, is even spotlighted in the tutorial.

One area D&D based RPGs often flounder a bit is handling opportunity attacks and reactions during combat. Sometimes these things happen automatically; sometimes, it's just outright ignored. In Solasta, there's a box that pops-up and gives you the option of reacting or not. It might not seem like a huge deal, but you have a limited number of reactions and opportunity attacks in a round. So, say an enemy is moving through your area, and you choose to attack it. But it hadn't been attacked yet, so your one attack doesn't do much. Later, an enemy close to death moves through, and you could end them, but you already used your opportunity attack. It's always a balancing game and risk vs. reward in these choices, but I love that they leave it in the player's hands. There's also a setting that will give you a limited amount of time to make that choice if you want some added pressure.

Solasta is an early access game, but it doesn't feel like one for the most part. There is some wonkiness with some animations, but I never saw any glitches that were all that bad visually. Certainly, nothing on the level of visual glitches Baulder's Gate 3 had when it was first released into early access. I also love how they've done the maps in Solasta, but there are some significant glitches when changing layers. But in the entire storyline, those are the only issues I ran into. The story was exciting, and I had a lot of fun playing through it. They have a rock-solid foundation of a game here, and I can't wait to see what new campaigns they add and how they polish everything up. Don't pass this game up if you are a fan of D&D, RPGs, and turn-based games.