I've had Animal Crossing: New Horizons installed on my Switch for over a year now. I bought it initially for my daughter to play on her Switch at the time, but I dabbled a bit as well when I got the urge. I missed the high mark of Animal Crossing when it first released, when it seemed everyone from hardcore gamers to the most casual, allowing players to live out their island dreams, all the while being indebted to Tom Nook.

Admittedly, I play sandbox games in a way that really doesn't make sense for a sandbox game. I need structure. I need a clearly defined focus. When I played The Witcher 3: The Wild Hunt, I had a hard time taking a step or two off the main story path, as I never really felt that becoming a Gwent master or diving deeper into Geralt's relationship with Yennefer made much sense when so much was on the line finding Ciri and warding off the Wild Hunt. Games like The Elder Scrolls V: Skyrim don't hold my attention longer than the main story and maybe one or two major quest lines. I just don't sandbox much in my sandboxes.

What's weird is this doesn't extend to sandbox MMORPGs, but that's another story I guess.

Where I'm going with this though is Animal Crossing is, at its core, a sandbox game. While you have stuff you can and should do each day, it is largely how you create your fun that draws you in, or in my case puts you off.

When I first tried playing a year ago I didn't get very far. I didn't have a house, nor did my island really belong to me since I was playing on my daughter's Switch (Also, her island is called Anime Bae and she wins the internet for all time). I would get frustrated due to a general lack of direction when trying to upgrade my island, even though Tom Nook would tell me what I should do. The lack of direction or any real clear objectives early on made me leave Anime Bae for good a few days later. I really didn't give it a chance because it seemed like a game I just couldn't get into. And while that's okay, it did make me feel like I was missing something that the rest of my peers and colleagues were enamored with.

However, I started playing it again recently with my partner, who loves Animal Crossing. In fact, it's really the only game they play, and their island is one to behold. Long paths lead from houses to pumpkin gardens, and the further you get into the island's center you start to find a bustling town square. Able Sisters and the Nook Cranny flank the Residential services building, which in turn is surrounded by colorful, carefully manicured gardens. A piano sits in the center of town for anyone who wants to get their rag-time on and entertain the locals, and the paths, ramps and bridges lead to other gardens, houses and special event centers they have created to celebrate the seasons.

It's a goal I have to make my island look as good and fun as I can - something though that has taken a bit to open myself up to doing. The lack of direction really got to me and I put down Animal Crossing: New Horizons for quite some time again, only picking it back up in the last few days. 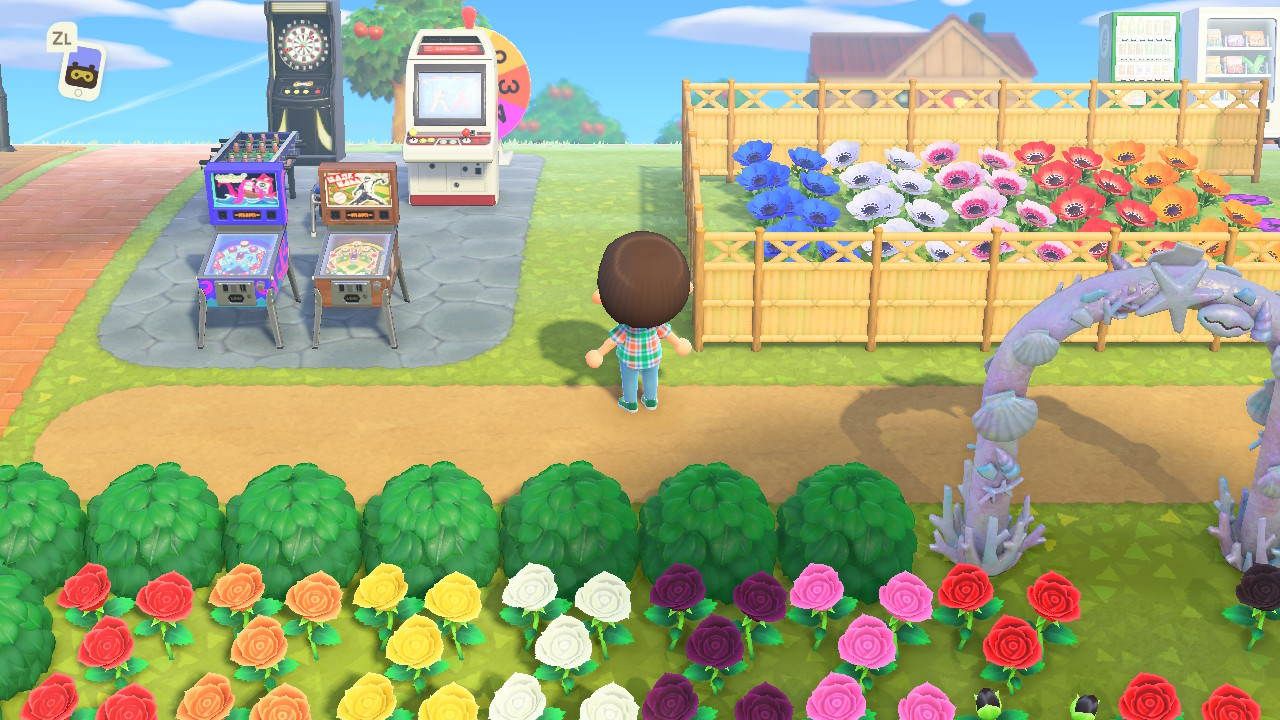 However, it's because of these last few days and the progress I've made that I feel motivated to play every day now. I'm not a fan of dailies in MMOs myself as they can create a FOMO like attitude that preys on addictive qualities I feel, but I do find myself logging into Animal Crossing to craft things the island needs. Just today I started my second bridge, connecting another portion of my island with the mainland. It felt like an accomplishment when I could pay off (almost) the whole cost the bridge with a single donation (though to be fair, my girlfriend did foot the bill for the remaining 2000 bells needed).

I also was feeling pretty accomplished when I logged in late last week and found I needed to help complete three building plots for new residents. This feeling like I have a clearly defined goal kept me hooked. Instead of wandering around wondering what I should do next, I knew exactly what we needed to progress. This is a marked difference versus those early days when I was still toughing it out in a tent while my original residents had already built their houses.

While I knew it would take time - Animal Crossing: New Horizons is a game that operates on real time - I couldn't help but feel dismayed by the general lack of progress I felt. This was even more keenly felt when I would visit other islands, including my partners.

I knew intrinsically that they had at least a year's headstart on me here, but I couldn't help but feel a bit sad and, if I'm honest, a little bit of hindsight FOMO I guess? If I had just played this when everyone else did, I wouldn't feel so behind now, I would think to myself when picking weeds and stowing away tree branches. 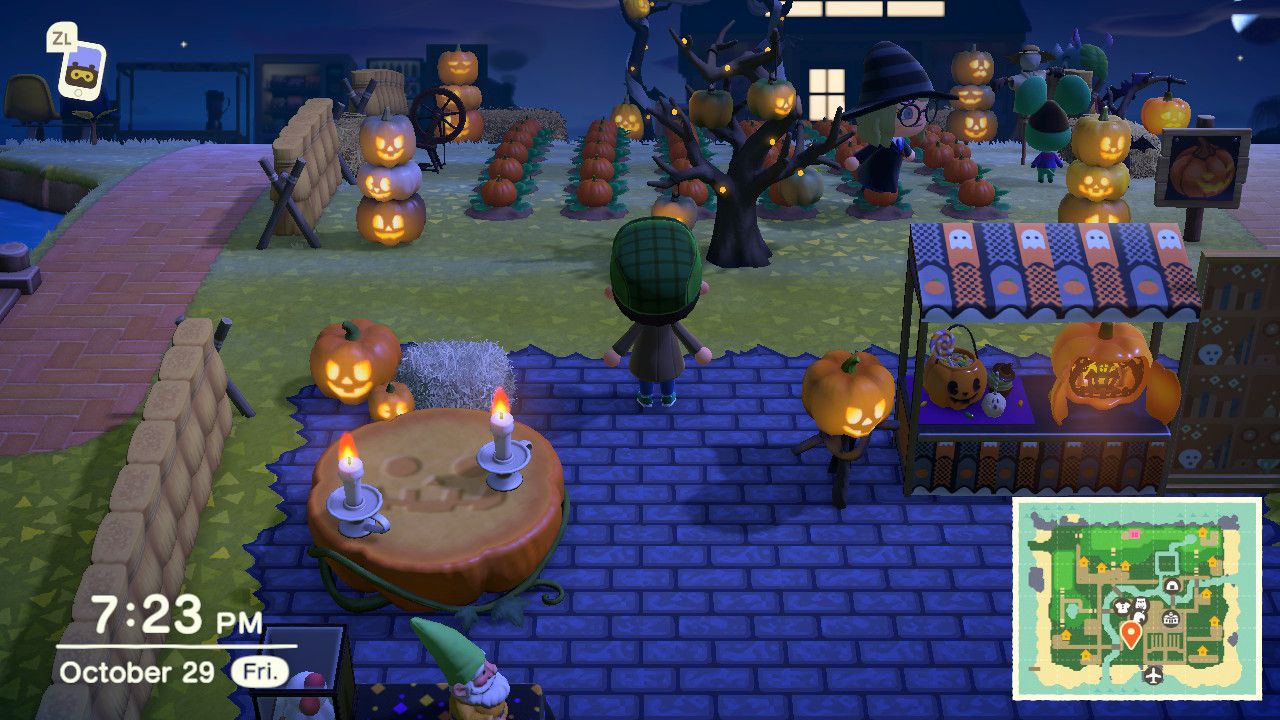 My partner gets into the Halloween spirit big time - and it makes the island all the more interesting.

My partner noticed this as well, especialy when I decided to just not log in anymore. They would take my Switch and do some daily chores for me on my island because they knew that if I just got a little further, I might start enjoying myself. And they were completely right.

I love town building games, sims and games with deep crafting mechanics. But most of all I love it when those games take these elements and make them social. There is a reason to visit a friend's island, help them water flowers, maybe poach a pear or peach from a tree to take back with you. There is a reason to work together to make your island a place your friends want to hang out on with you. As I started to noticed progress on my island just after a single play session from my partner, though, I wanted to jump back in and give this one more chance.

This was last week - and I've played pretty much daily since.

Finding fossils to turn into the museum, collecting fruit to sell to earn bells early, and starting to plan out the layout I eventually want for my Island has helped spur my interest. It's given me goals I can set for myself and give myself direction, especially if I'm waiting on a construction work to be finished by Tom Nook.

Just today the Residential Services building was finished on my island, dominating the plaza and making me feel like real progress is being made finally. I watered my pumpkins and was rewarded with more plump squash I could sell to recoup some of the bells needed to build more infrastructure on my island. I was greeted by new residents, including one who made me smile as he talked about the wonders of the stars and nature itself. 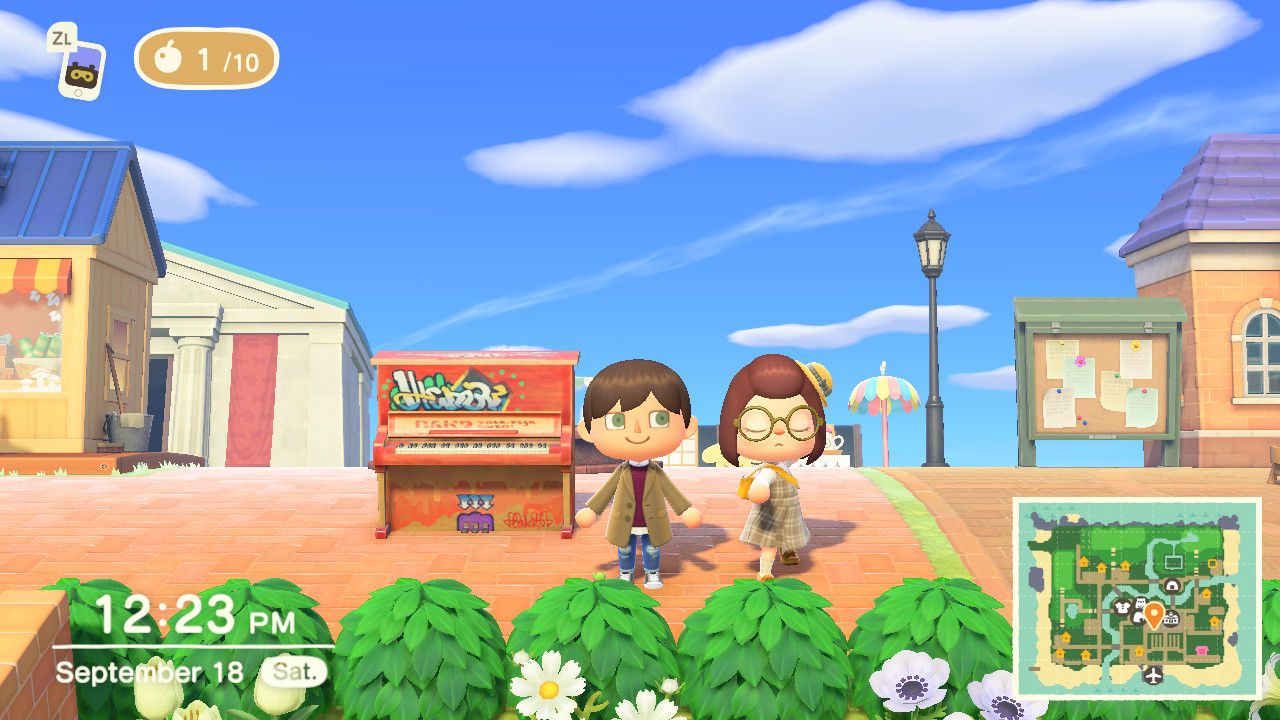 Meanwhile I've planted my first garden, invested in some shrubbery (with a two level effect and a little path running down the middle). I built a tiny Jack O'Lantern decoration outside my house to get into the festive mood  late last week. I've visited my partner's island a few times to help water their plants and crossbreed to try to get the  missing colors they need. I've spent an evening in my girlfriend's music room having a silly impromptu jam session, all the while not feeling the pull that I wasn't "progressing."

I was having fun.

And I think it's because I was actually starting to finally see some progress around me that let me relax and take in what Animal Crossing: New Horizons does great: bring people together. The progression I was feeling was the result of the "core" experience of Animal Crossing: socialization. My "village" came together to help get me started and on track. My partner saw that I really wanted to get into Animal Crossing but just couldn't get past that mental barrier I put up for myself that they did what they could to help get me over the hump.

As I progress and built more, I'm interested to start flexing some of my design muscles. Can I make a pattern for a shirt or coat that might be spotting in a shared screenshot at some point? Can I decorate my house to win prizes in the Happy Home Designer? Also, with cooking and farming coming to New Horizons this week, with the Rice Cooker that had sat on my counter become more than just an elaborate prop?

I feel like I'm coming into my own here in Animal Crossing: New Horizons. I'm eager to pull weeds, mine the money rock or just watch for shooting stars with my girlfriend at night while we're talking about our days. I finally feel like I understand why Animal Crossing was so popular, especially during the pandemic: bringing people together for a common goal in a world where we felt cotinually isolated and divided. I can't wait to see what part of Animal Crossing will hook me next.

I still refuse to fish in a video game, though.