I’ll never forget sitting in the audience at Sony’s E3 2015 Press Conference, the roar of the crowd when the biggest reveal of the show was on screen. Final Fantasy VII REMAKE. It was real. This game means so much to so many people in my generation and was being remade it for a modern console.

It was something I had wanted for years, and I found myself brimming with excitement. However, seated in the media section with my laptop open to write up the news, I experienced an inner struggle– going crazy for something the fan in me desperately wanted, versus maintaining the expected decorum of a member of the press.

It was something I feel many of my colleagues struggled with that night. I remember looking over at a friend of mine who was there, but who was not covering the event itself. Standing up, he had his hands on his head, a look of pure excitement mixed with uncertainty clearly etched on his face.

This decorum, the need to ensure us as media don’t get sucked in by what is now being called “hype,” is key to ensuring we do our first and foremost job. That job is to provide actionable information based on factual reporting to help our readers make informed purchasing decisions.

Before we go further, it’s important to clearly define “excitement,” and, “hype.” Contrary to popular belief in this industry, they are not interchangeable. Hype is generally more seen as promotional. Merriam-Webster defines it as “to promote or publicize extravagantly.”

Excitement, on the other hand, is simply being in a state of heightened energy, enthusiastic about something. For me, personally, there is a clear difference between the two. While excitement can be conveyed with enthusiasm, talking excitedly about something, I still think it leaves room for critical thought and recognizing flaws. I can be excited about the prospect of Final Fantasy VII REMAKE while still being concerned with some of the overall changes the developers at the time (and we know now) were making.

Hype, meanwhile, doesn’t really leave room for this. Hype typically is found in just promoting a product without really questioning what’s in front of you. At least how I read into it everytime I’m confronted by  that feeling.

Games media and hype seemingly go hand in hand at times. But oftentimes excitement about a product gets looped into the hype train.

Games journalists should be excited to cover the games we cover.

I think excitement and passion for the industry should be fundamental to every member of the games press. There is nothing wrong with finding yourself excited to try out that new game, install a new graphics card, or discuss the next great game mechanic that just arrived on the scene. There is some value in these types of articles. A perfect example of that has been my Valheim coverage this week. An Early Access game that has made me fall in love with survival games again, it has me excited and brimming with article ideas. 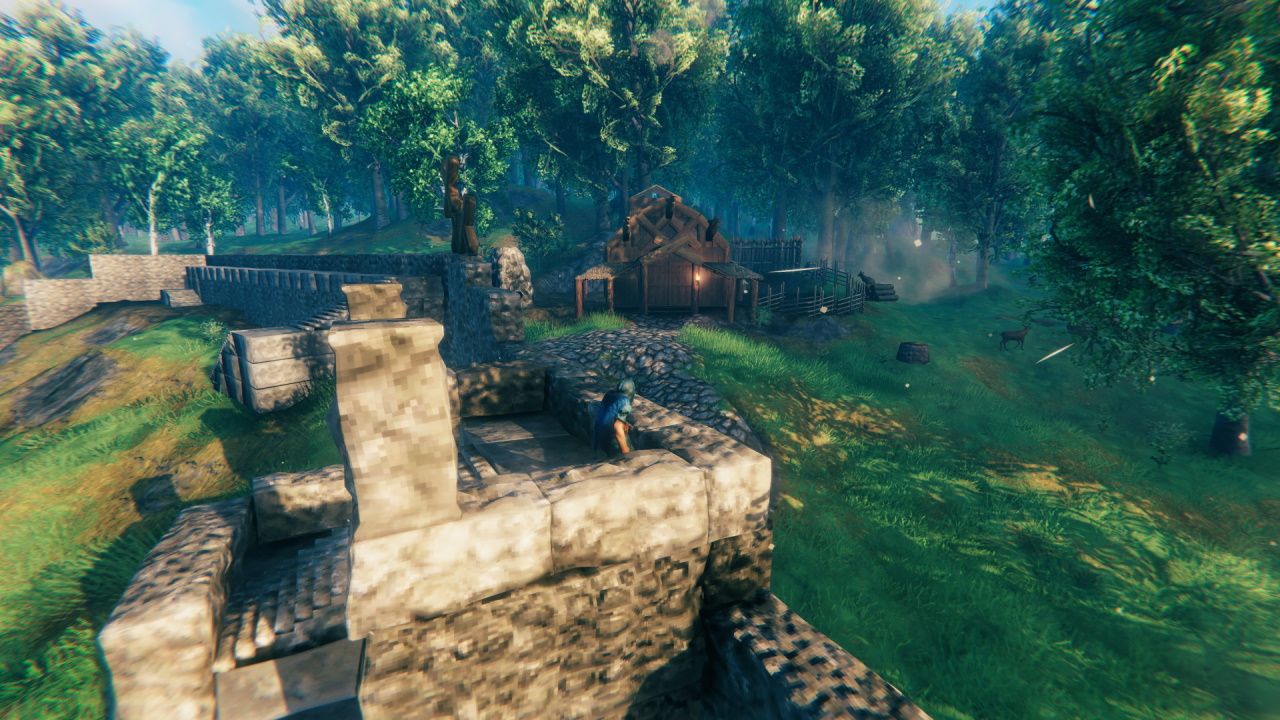 That excitement – and the coverage Valheim has been receiving from nearly every press outlet – is well earned. The team at Iron Gate Studio have put out a game in Early Access that is more polished than some fully released triple-A titles. It’s definitely not perfect, but we have first-hand data fueling that excitement instead of simple speculation based on a press release.

And that’s where much of the trouble comes from. The speculations in previews have us excited, but lack the critical analysis that we as games critics should be bringing to the table. Preview coverage whether it be a hands-off demo, interview, or simply a speculative editorial, can sometimes lean a bit heavy on the marketing around a game instead of presenting critical analysis.

The MMO sphere feels ripe for this as well, especially given the sheer dearth of major studios creating full-fledged MMOs. We’re instead seeing games that are more MMO-adjacent - espousing MMO features such as multiplayer, questing, etc.- but are more sheer cookie-cutter live services than an actual MMO.

It’s understandable then when the “next major MMO” gets discussed, whether it be from a major studio or a crowdfunded project, people get excited – media included. For a genre that has been seemingly “dead” for a while, there is still a ton of passion in the players interested in a return to form for the genre proper.

Games like Star Citizen and Chronicles of Elyria promise the world and don’t deliver, and the ones left hurting are those who have dumped real money into the product. Missed deadlines, continual delays, and abusive monetization modelscan go unchallenged at times by games critics – myself included. All the while, articles are written which feed into a hype train that can derail as easily as it can gain steam.

Take No Man’s Sky, for example. It’s an easy one to point to, and is arguably one of the highest profile games to experience hype and inevitable disappointment. A lot of the blame is placed at Sean Murray’s feet – and rightfully so. Murray talked up features for the game that were simply absent when it was released. The product and vision Sean Murray sold gamers years ago might be closer to that vision today,, but it was nowhere near that upon release.

The games media should definitely take some blame here. We didn’t do a good enough job to convey concerns and analyze claims critically to our audience.As TotalBiscuit eloquently put in 2014, we have a “duty of care to protect.”

Part of this was purely the PR campaign, or perhaps lack of a real PR team handling Sean Murray. Part of the issue was that all of us  took everything Murray said at face value, especially since we really didn’t have a reason to think otherwise. No one had really played much of No Man’s Sky before it released, and there really wasn’t a review cycle allowing the press to present their findings before consumers could go hands-on themselves.

I remember booting up the title the night it released, having gone to GameStop to buy a copy since my physical review copy wouldn’t arrive until the day after release. By then, players would discover that what Murray had promised in the months and years leading up to release was that No Man’s Sky was not the game that many fans had been expecting. It was my own personal excitement deflated as NMS installed slowly on my PS4 harddrive, a victim of a cycle that the industry of which I’m a part helped fuel.

And those unrealistic expectations could have been tempered had more outlets done a better job of analyzing and really breaking down everything that was being said to the media at the time. Digging into the claims a bit more, asking Murray to clarify and explain exactly what will be in the game at launch, and more could have been done on a much wider scale.

It’s difficult, especially without the access many other publishers provide, to truly analyze something critically that doesn’t yet exist. However, the flipside should also apply. We don’t need to overanalyze what we’re looking forward to, driving a hype train forward that does nothing but fuel expectations that might not be met.

That’s not to say articles shouldn’t be written talking about games we’re excited about, or talk about features we’re looking forward to seeing firsthand ourselves – quite the opposite. We should still write those articles. But, the approach should change to ensure that we don’t write them in a way that sensationalizes and fuels hype, ultimately damaging those we write for - you.

It also stands to reason what we need to analyze more thoughtfully some of the things going on in the industry. We see this happening with multiple outlets analyzing and critiquing the state of game studios with Jason Schreier’s wonderful investigative reporting, for example. We also see outlets that focus on the social aspects of games and their place in culture, as well as those fantastic journalists who dive deep into the very real social issues facing game devs and media personalities alike. There is some outrageously fantastic work being produced by the games media as a whole, and it should be praised.

We at MMORPG specifically need to do a better job of analyzing this part of the industry and the actors within – especially crowdfunded hype. It seems the “next big MMO” is always around the corner with crowdfunded games, with each successive game getting more and more complex and promising more and more before failing to deliver on the deadlines and promises.

Some studios fail to deliver altogether, shutting down development only to revive in what feels like an attempt to side-step legal action from their own backers to some.

Some studios never seem like they’ll release the game they are working on, feeling a bit like GRR Martin in the South Park Game of Thrones parody episodes. Like Scott Malkinson’s much needed pizza, it’s always coming, but never arrives.

The onus isn’t just on those who sent money to these studios for the project they believe in. This onus is on all of us  to hold these devs  accountable.

In the end, some of this rests in the hands of those of us who write these articles to write for people, and not just for a search engine algorithm. SEO is important since clicks and views keep sites alive, especially ones like MMORPG which don’t charge a subscription fee or receive direct community funding. But we should always strive to write for people first, SEO second. This point can get lost in the listicles and sensational headlines that come across all our feeds over time. Clicks equal revenue, and revenue means we get to keep doing this job we all love. But the two can be, and should be balanced.

Overall, I think the games media does a good job of mitigating hype, but we definitely are not perfect. Games media is not some singular entity either – I can only speak to my experience with nine years in this industry with the last year and a half at the helm of MMORPG.com. One thing I hope we’ve done since we took over in 2019 is mitigated this hype problem as much as possible.

There is nothing wrong with a marketing campaign trying to generate conversation and excitement around a product. That’s the job of PR and marketing teams. However, it’s our job as media to dig past the hype and pandering and get to the core of the news, report it factually, and do any editorializing on it after the fact. We aren’t perfect. We make and have made mistakes. Hopefully, it’s something we can mindfully improve so we don’t see another No Man’s Sky or Cyberpunk 2077. Or Fallout 76.

Ensuring excitement doesn’t bleed into hype-fuel is a delicate balance, one that needs to be treated with the critical thought we all should bring to the table. The media isn’t the only one to blame for pre-release hype, but we definitely have our share of responsibility..