A new year brings a new year-long story from ZeniMax and Bethesda, this time we are heading to some of the areas that players will remember from The Elder Scrolls IV: Oblivion only set 800 years earlier. Are the new chapter features enough to bring a veteran player like me back to The Elder Scrolls Online and will it attract new players to the game? It looks great on the surface but let’s take a closer look.

To provide a bit of a background, I started playing ESO shortly before the official release, and over the years I have taken a few breaks. All my characters for each class are currently at max level and my Champion Point total is at 942. Last year I decided to stop playing regularly shortly before the 2020 Harrowstorm DLC was released. While the 2020 reveal of the Greymoor chapter was right up my alley, I love gothic adventure and vampires. The announced Antiquities System just wasn’t enough of a character progression system to hold my interest.

My initial feelings about this year’s global reveal were mixed. In The Gates of Oblivion chapter, the Daedric Prince Mahrunes Dagon is causing problems for Tamriel. To spoil his plan our adventures will take us into the new Blackwood zone and small pockets of the Deadlands when the chapter releases in Q2. It will not be until the Q4 story DLC that we will be able to explore the Deadlands fully, which, while a bit disappointing, is understandable.

Returning for this chapter as well are a couple of fan-favorite characters. Eveli Sharp-Arrow a Wood Elf from the Orsinium DLC and the Dremora Lyranth, who appeared in the original main storyline. I was happy to see both characters making an appearance as it works well to help tie our previous adventures into the current story. 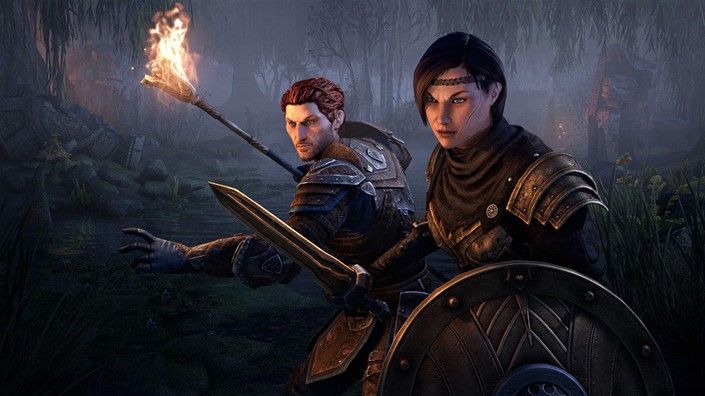 For mechanics, the Blackwood zone will come with a new 12 player trial, a new anchor style of gameplay that will randomly appear throughout the zone, and a new tutorial system where you will be able to choose which chapter to explore once it ends. Though the most interesting announcement for me during the global reveal was the new Companion system that can be used everywhere in the game except when it comes to PvP. Unfortunately, this was merely announced, with very few specifics provided. It was also nice to hear that the server hardware was being upgraded this year to support the game for the long term.

There were a few negatives for me which almost turned me off of the new chapter. Early in the presentation a bit of a teaser was tossed out mentioning big "future" plans for ESO and the studio. I like that the team is looking ahead but with various announcements/promises over the past couple of years from different companies… without providing a few solid details to go along with a statement like this, it just rubbed me the wrong way. Also missing was any announcement of a new class, new skill line(s), and, initially, nothing about the Champion Point system or character progression.

It was the follow-up community Livestream that brought me back on board with ESO and the new chapter. The team provided a few more details about the new Companion system: You will level the companions up, equip them with gear, complete story quests, and that there will be two characters available at the chapter release. There was also a hint of more companions to be added later. All of which sounded great and made me more curious about the system. 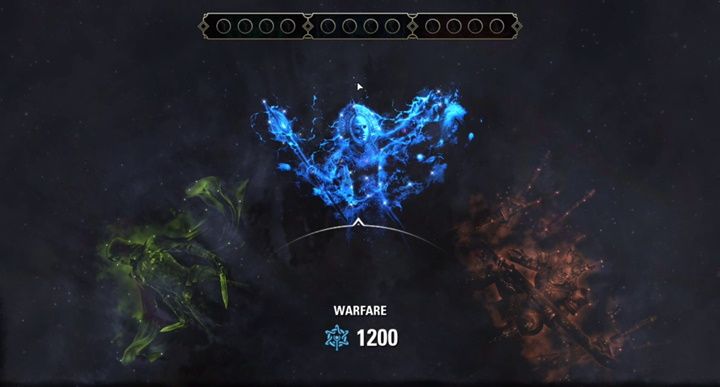 For me though, and I expect for many other ESO veterans, it was the announcement from Lead Combat & PvP Designer Brian Wheeler that was the most interesting. Update 29, which will be the first DLC of the new chapter story Flames of Ambition will not only contain the traditional two new dungeons. It will also include the new Champion Point 2.0 System that the team has been working on for two years. The new system will reduce the number of “main” constellations from 9 to 3, but rather than only having a few “stars” in each where CPs can be allocated to, every star now can be upgraded, providing a passive bonus, ability, or power. The three new constellations will be craft, warfare, and fitness. Also, within each constellation, the system can be expanded further by adding sub-constellations with more stars. Though at the release of CP 2.0, only warfare will have sub-constellations. 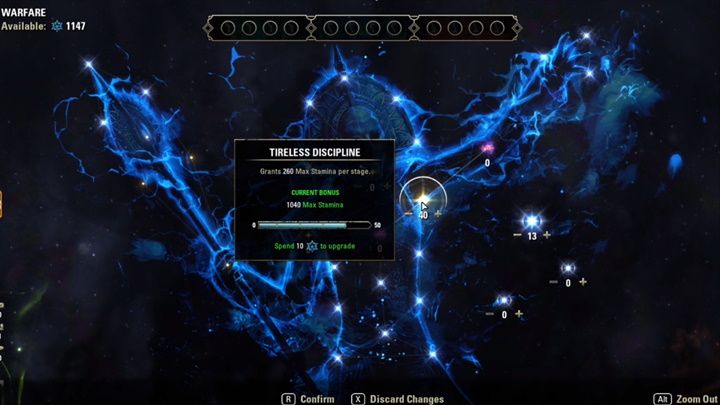 The new system will also contain a new UI element called the Champion Bar. To make certain stars active they will need to be slotted into the bar and there will be 4 slots per constellation. This will allow players to change up what stars are active depending on their role/needs. What stars are active can be changed outside of combat at any time. Also, the original passive stats players received from spending their first so many champion points will now be automatically baked into your character. To top it all off the CP cap of 810 will be increasing to… 3600. There will be a soft cap where instead of giving your character vertical benefits it will provide more horizontal choices. I am interested to see exactly how that works, but no further details were given on the soft cap during the Livestream.

To go along with the new Champion Point System 2.0 our character sheet will also break out more of the character stats such as spell penetration and physical penetration instead of players needing to rely on addons. There will also be an armor rework affecting all the passives so that each armor type will “feel” more like the actual armor they are meant to represent.

Regarding PvP, unfortunately, there was little in the way of news concerning performance improvements. The developers are still working on the system and in the next test, later this year, they will disable item set procs in Cyrodiil on the PC to see how it impacts server performance.

For veterans who had capped their CPs, the future is looking pretty good, it is a good time to jump back in and get ready for Update 29 if you have anything outstanding/unfinished. For players looking to try out the new update, it is already up now on the PTS. Otherwise, I would hold off until it goes live in the next couple of months.

I think new players will find that the perfect time to jump into ESO will be in Q2 when The Gates of Oblivion chapter drops. The new tutorial is meant to be streamlined, making getting into the game and choosing where to start your journey easier. If you do decide to try out ESO before the new chapter releases, there is always the free trial. The Elder Scrolls Online is a great game with a lot of PvE content though you may need some addons to help tailor the UI for your tastes, I can’t live without a minimap and a few other common UI features found in other MMOs and I found the default UI to minimalist to the point where it turned me off of playing the game at one point.

Last year I told myself that if ZeniMax improved the Champion Point System and/or expanded character progress in a meaningful way I would resub to ESO Plus. With the new system arriving by the end of Q1, it looks like I will be resubbing in the new future. The new system looks promising, I am looking forward to seeing how they expand on it further and how the Companion System shapes up. I hope the companion quests that were mentioned are extensive and interesting to help give depth to the NPCs, that way players can develop a connection to them over time.