Wow, what a year. I am still trying to wrap my head around everything that happened, not only in gaming but also in life. One of the games I played the most this past year has been The Elder Scrolls Online. From the Flames of Ambition new Champion Point system to the Blackwood Chapter introduction of Companions and Seals of Endeavor. ESO has kept things interesting. But what worked and what didn’t? Lets’ take a quick look at where things stand now and how well the Deadlands DLC did at wrapping up the year-long storyline.

The Flames of Ambition DLC and Update 29 introduced the Champion Point 2.0 system. A needed update for those veteran players who had already capped out their CPs. While the new system cut down the constellations to three, the total number of nodes where points could be spent had increased. The CP cap was also increased to 3600.

I have liked the new system so far and am interested to see how it evolves further over time. I already have specific nodes that I pick up for every build. It was nice to see the developers make further adjustments when the Blackwood Chapter was released. 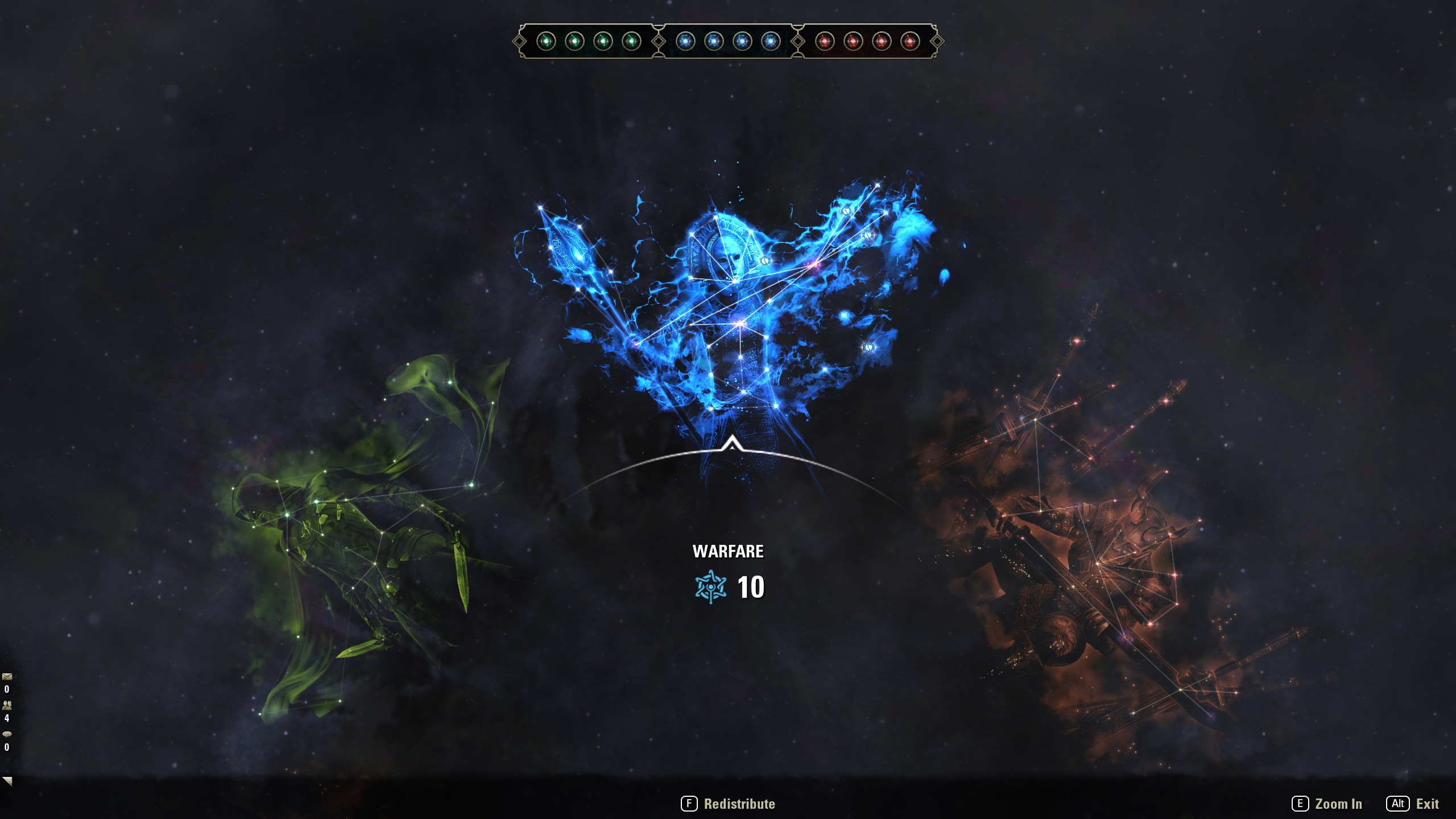 Unfortunately, CP 2.0 didn’t accomplish what I was hoping for personally. While playing an MMORPG, I always like feeling that my character is progressing in a meaningful way. While the CP 2.0 certainly adds a lot of power to your character, in the long run, the incremental increase of one point at a time doesn’t scratch that progression itch. I hope the new system will continue to evolve in 2022 as it has a lot of potential.

When Companions were released with the Blackwood Chapter this year, I was surprised to find that it did scratch that progression itch for me at first. I enjoyed doing the short introduction quests and having them level up beside me while questing felt great. Unfortunately, Companions are not quite what I was expecting. But do have the potential to become something more.

Mirri Elendis and Bastian Hallix just didn’t mesh well with me as a player. While their initial introductions were interesting, they didn’t have any other link to the story or an existing rapport with my character. It felt like they were more of a tag-along/sidekick than actual friends. If I thought about it too much from a narrative perspective, I felt a touch guilty dragging one of these two along to fight Daedric Princes. Mirri even makes continual comments about things turning into a fight all the time.

Eventually, having a companion out just became extra damage or healing that I had access to while questing and who I accidentally clicked on when they got in the way. Companions gear drops were also mostly uninteresting. More than half of the companion gear traits could currently be taken out of the game and, in my opinion, would not be missed. Quickened gear drops are about the only ones I tend to hoard. 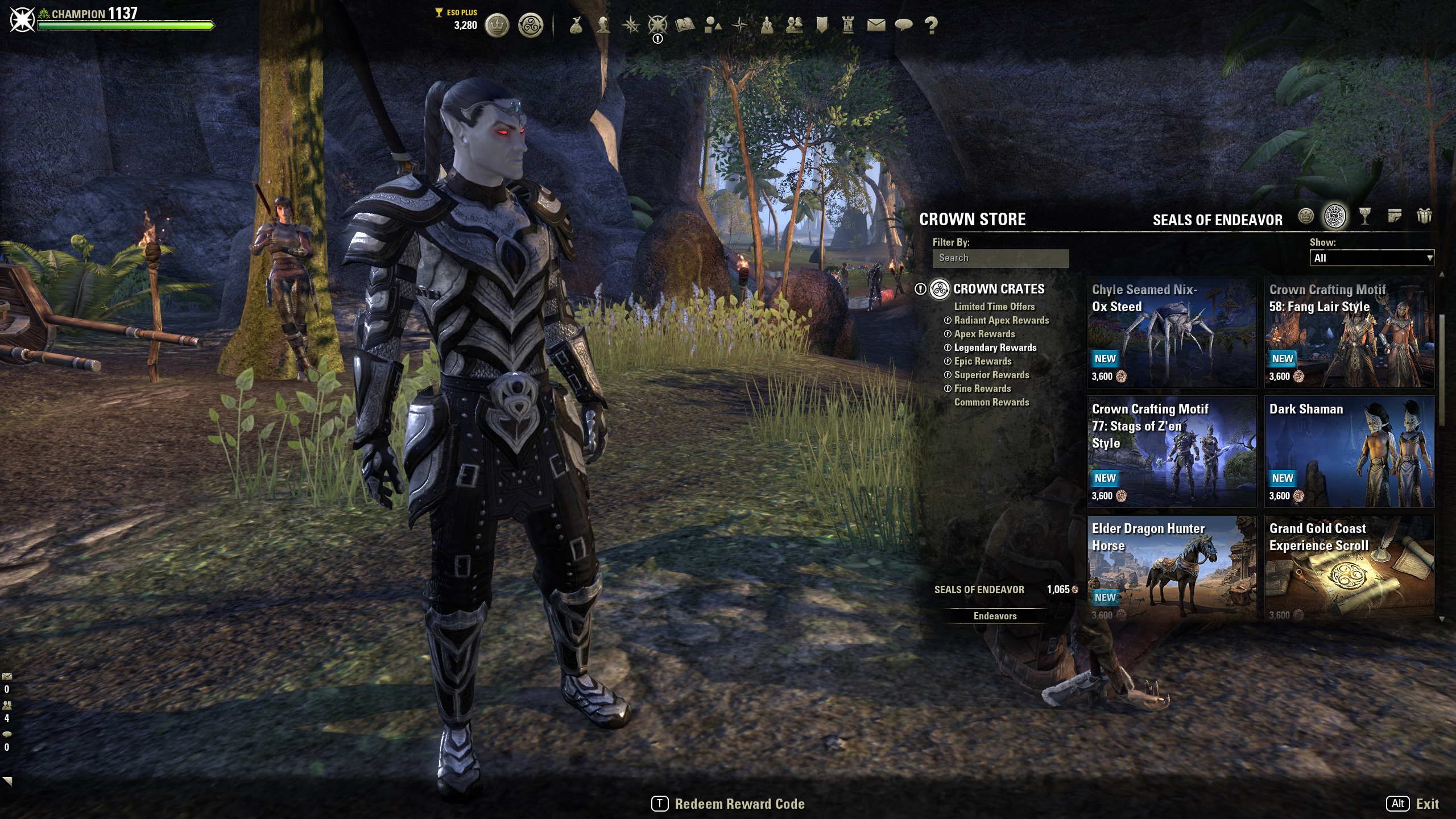 Seals of Endeavor were a surprise for me with the release of Blackwood. It was nice to see the system implemented, but my initial minor concern proved somewhat valid. While it is fun to see the daily and weekly completion messages, the number of seals needed to purchase anything interesting is substantial. I tend to forget the Seals exist most of the time, and someday I will be pleasantly surprised when I can buy something interesting. It is not a system I go out of my way to actively engage with unless I have nothing else to do.

The story, environment, and voice acting have all been on point. Zenimax has maintained the quality of the content over this year, even with all the challenges in the world today. The return of Lyranth and Eveli Sharp-Arrow from previous storylines was welcome and well implemented. While I didn’t find the narrative quite as compelling this year, it was enjoyable.

In November, the final DLC of the year, Deadlands, was released. I found that it wrapped up the story efficiently but was somewhat unsatisfying. There was several great quality of life features introduced in Update 32 though. Curated Item Set Drops, players can get the drops they are missing from dungeons for gear sets more easily. The Armory System, allows players to quickly swap between sets of gear they have in their inventory. Gear sets and monster sets can now crit again. The various other mechanical changes typical to every Update also feel good and hybrid stats for gear are now the norm. I am having a lot of fun with hybrid builds while questing in the open world, but I am not sure how valid such builds will be in trial content. Some of the new gear sets were also interesting to use in new builds, I have been using specifically Hexos’ Ward quite a bit on three different characters for the extra damage shield proc. 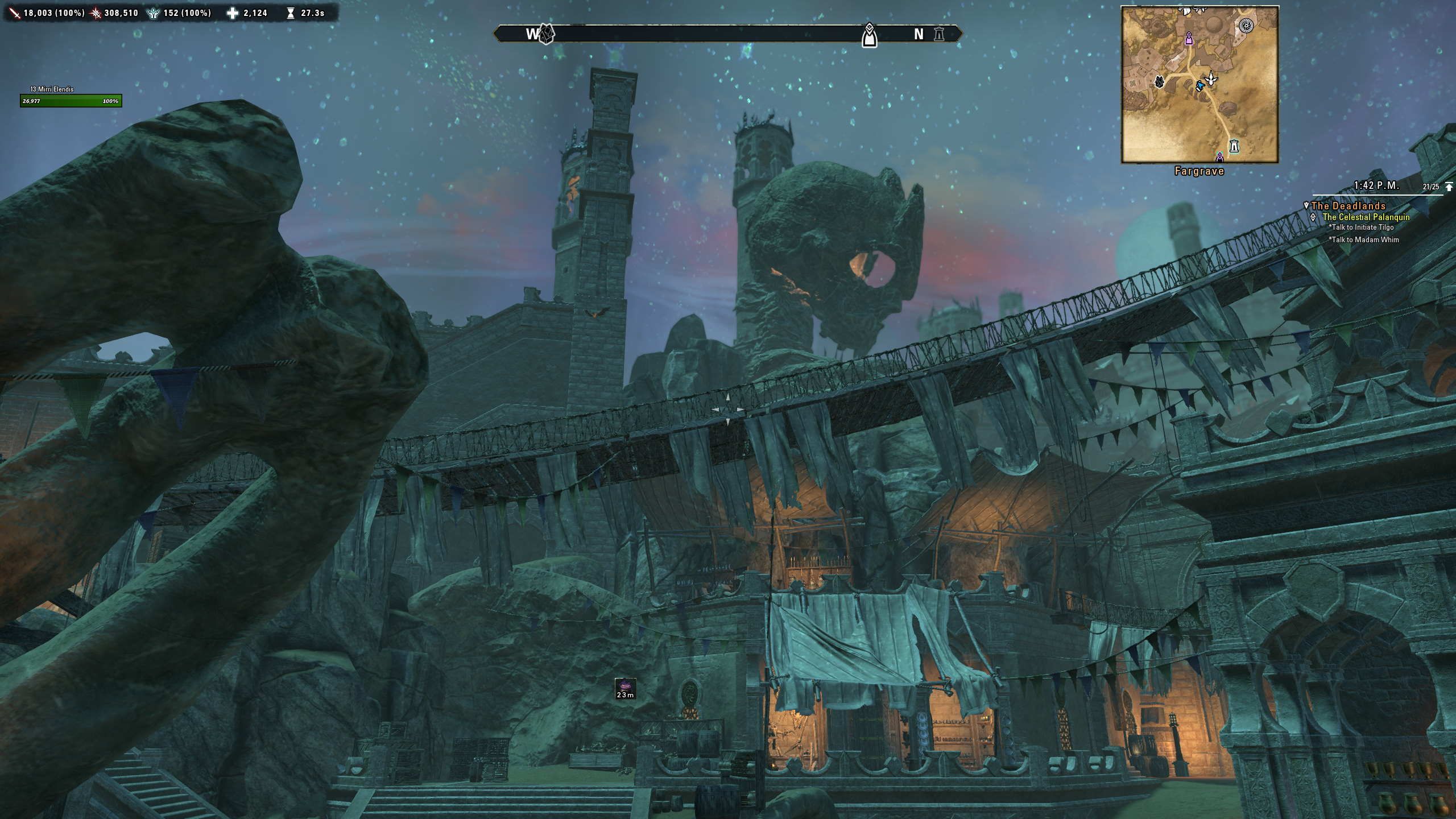 I do have mixed feelings about the Deadlands DLC. It includes two main play areas, the City of Fargrave and the Deadlands. Fargrave’s layout is interesting with a plaza area, market, and shambles. Once I was able to navigate my way around the narrow streets, it felt somewhat unfinished and spars. I am not sure if the size of the city was reduced for various reasons during development, but I am hoping Zenimax expands on it in the future content since there is mention during the storyline that the city can be shaped by those that live in it. 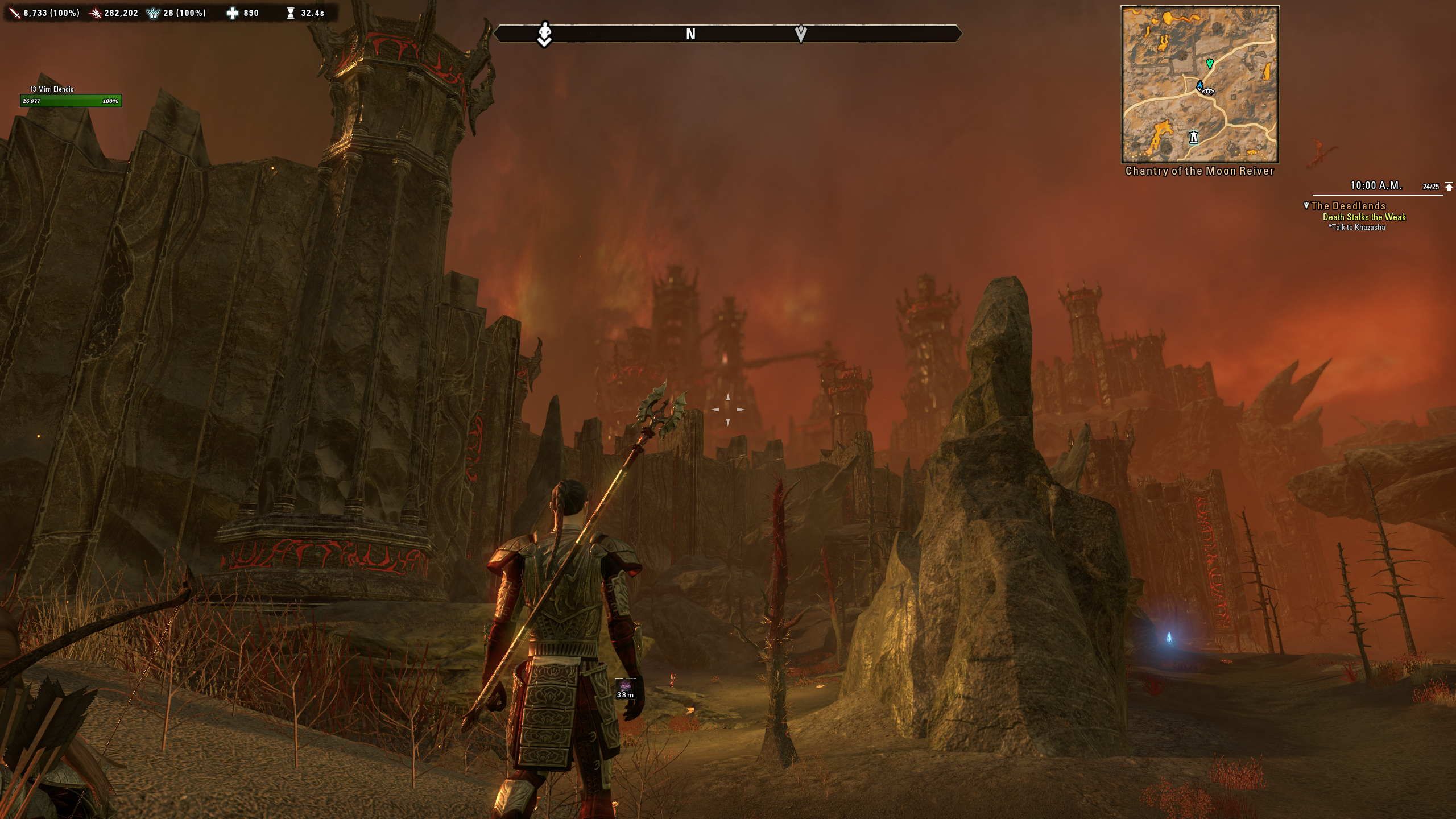 The Deadlands itself was fine and served its purpose as a zone. I was honestly more impressed with the various dungeon environments this year. I found the environmental hazards, such as the random lightning and powerful wandering enemies to be a nonissue. They looked dangerous though and that added to the atmosphere along with a very nice backdrop.

For gameplay mechanics, one system I was looking forward to was the Oblivion portals this year that could appear randomly in the new zones and the first time through one was interesting. After that, they could have been removed from the game, and I would not have missed them. I was expecting the portals to be dynamic content, but you were always running through the same map to reach the end boss. The task of charging Lucent crystals at certain parts in the story was also more tedious than a puzzle/challenge to be solved. Finally, the DLC climax fight felt lackluster. Players have done this kind of encounter/story beat multiple times already and this felt like a somewhat watered-down version. 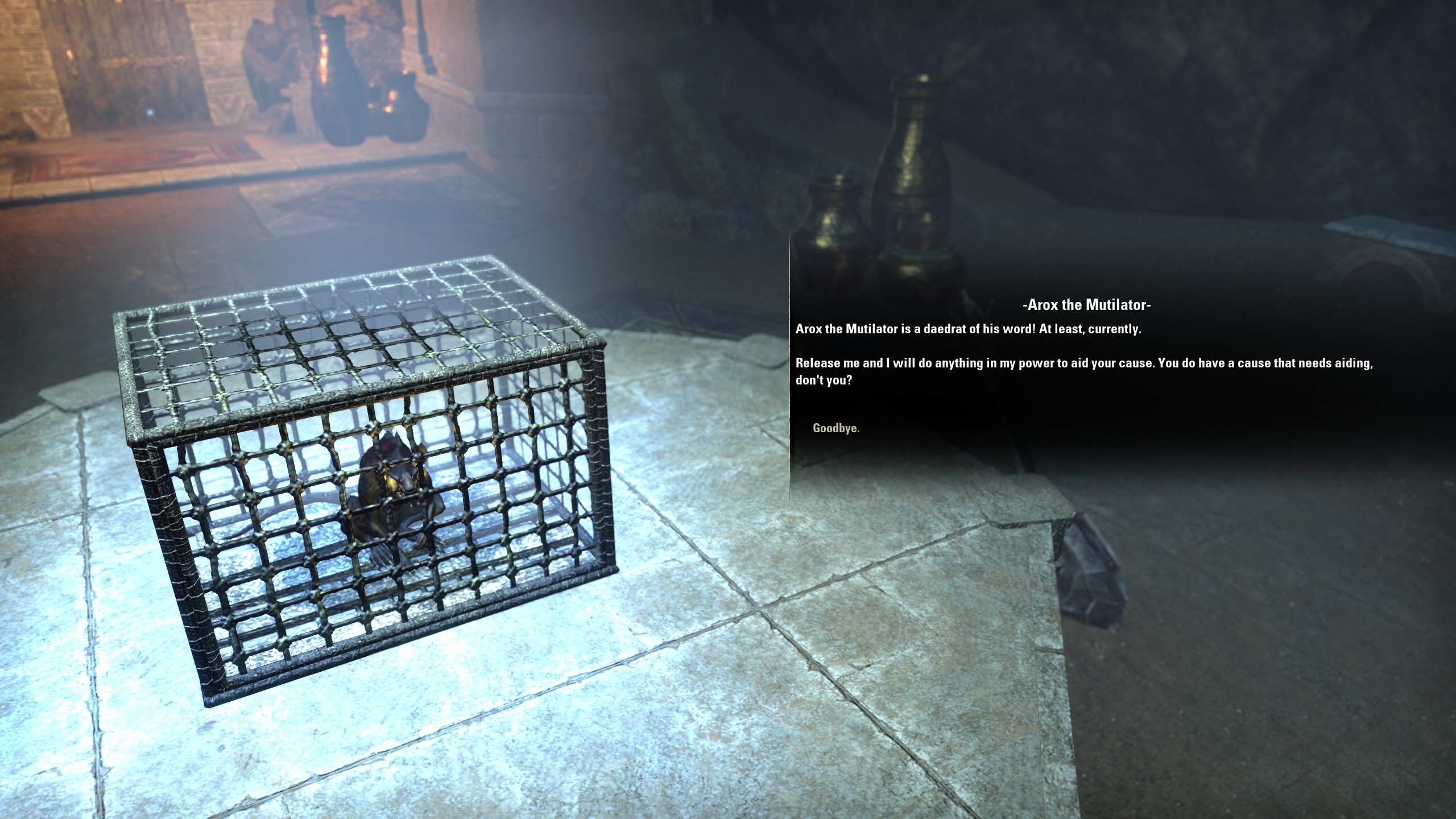 ESO is an MMORPG, and the story is on rails. Even if you make certain choices along the way, your character will ultimately end up in the same spot. For me with the Deadlands DLC, you really felt those rails. What saved it is the characters. The return of Divayth Fyr from the Clockwork City DLC, The Anchorite, Sister Celdina, Madam Whim, and of course Arox the Mutilator. Introductions and interactions with these characters improve the story experience so much. The developers always do such a good job with some characters that I want to learn more about each of them, and I am a little sad when a story/questline finishes that they are involved with.

Zenimax overall this year had a solid outing with ESO, but it is mainly for their implementation of new systems, quality of life improvements, and holding steady with the quality of content. This year’s DLC and Chapter just added more to the ton of content to explore. For the Deadlands DLC specifically, I felt developers stumbled a bit. But the memorable characters saved it, and they wrapped up the storyline efficiently, even if it was a little unsatisfying.

If you are a player looking for an overhaul to the combat system or fixes/improvements to PvP there is nothing yet. If you don’t like the underlying combat system of ESO I don’t expect there to be any major changes in that area since many other players do seem to enjoy it. On the PvP front, I am a bit more hopeful that we will see some improvements in 2022.

In the Studio Director’s Letter: 2021 Retrospective Matt Firor indicates that they will be looking to tell a more traditional “Elder Scrolls” story in 2022 rather than an “end of the world invasion”. I think taking a break from the world ended storylines will be a nice change of pace, and maybe we can get more DLC content like Orsinium that tells a great story with some world-building elements focused on Tamriel.

I think in 2022 Zenimax has a great base to start with from the new systems implemented in 2021. While my wishlist for ESO includes several things: the continued evolution of CP 2.0, a new race… Maormer (Sea Elves), new class, and spell crafting. Realistically, I would be happy with minor improvements to the current systems, a great story, and a few new companions.

I would love to see old characters we have formed connections with from previous adventures implemented as companions. Maybe the developers can have a flag in the system so when on certain questlines a specific companion cannot be summoned due to their involvement in the story. After all, who doesn’t want to adventure with Eveli or Arox.

What would you like to see in ESO for 2022? Let me know in the comments.