Over the last week and a half, there’s been a battle brewing in the New World Closed Beta. Well, there have been plenty of battles, but I’m talking about one battle in particular - the Battle For New World. Out of all the servers Amazon Games set up for the Closed Beta Test of its upcoming MMORPG, New World, one North American and one European server were chosen to hold this special event. 66 Twitch streamers - 33 per server - descended upon Aeternum.

Split evenly among the three factions, each group of streamers set out to conquer the regions of Aeternum and earn points by completing a list of tasks along the way. Running the entire length of the Beta, the faction with the most points at the end of the contest would not only walk away with bragging rights but would also be rewarded with a chest of booty to share with their communities. Each winner is to receive 100 copies of New World to give away to their community along with a special Twitch Drop to run on their channels during the first week of release, which is August 31 if you’re wondering.

My first thought was to praise Amazon Games for going beyond the normal sponsored streams you see with most big releases these days. It would have been such a waste if Amazon didn’t capitalize on their own platform, so a special event that would pull so many streamers into the same game space was a great idea. Twitch communities are always chomping at the bit to jump into a game alongside their favorite streamer, and New World would be the perfect way to get hundreds - thousands even - to pre-order for a beta key so they could push their leader to the top of the leaderboard. 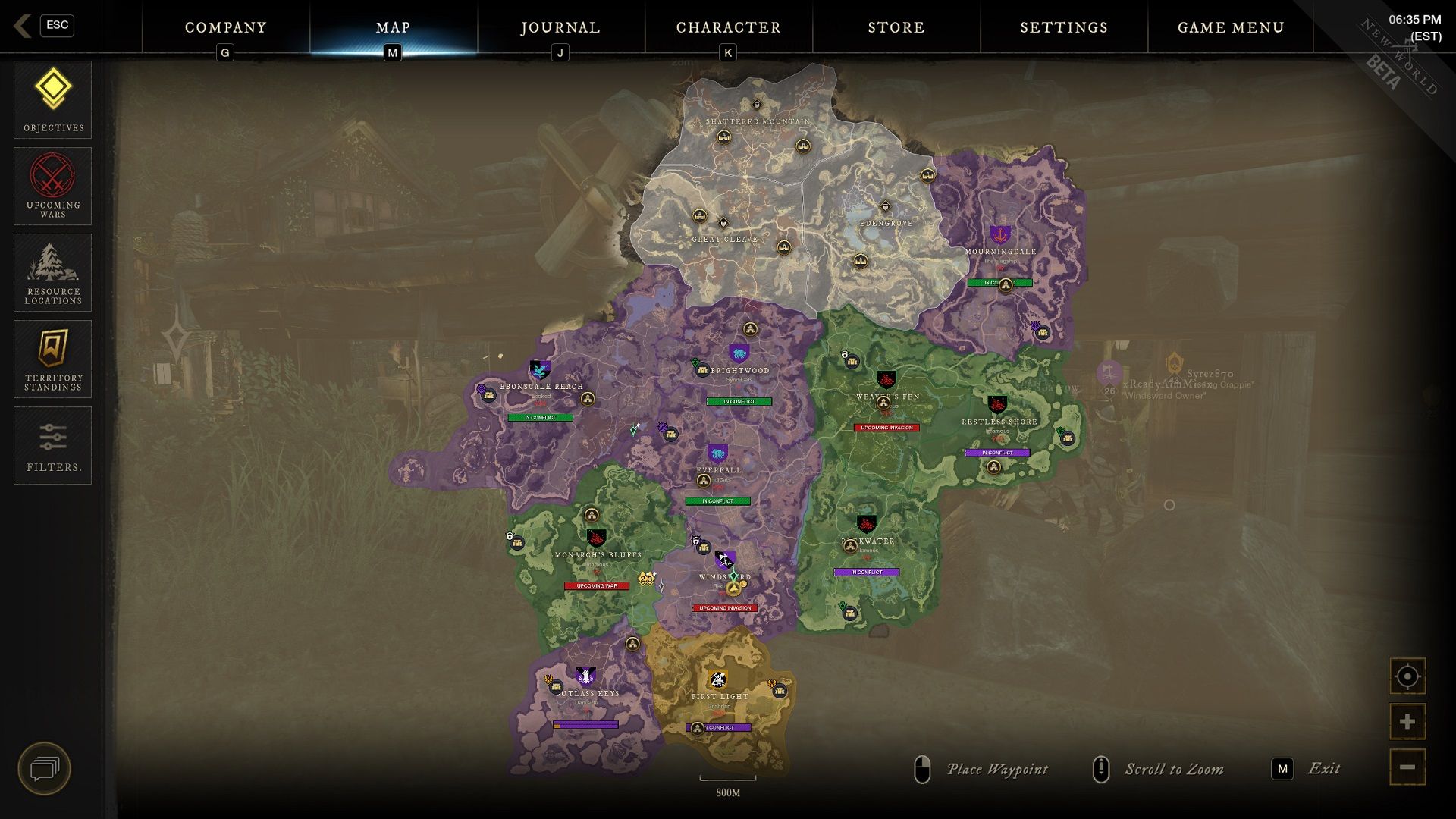 The Battle For New World starts to heat up mid way through the Closed Beta.

On the first day of closed beta, when all of the servers had queues and reports of 200,000 concurrent players started coming out, I realized that any pre-sales due to BFNW were just a drop in the bucket. I’m not suggesting that BFNW isn’t a successful way to market the closed beta, it’s just that I now realize the event is more about long-term exposure than a quick boost of presales by the streamer’s communities. Besides, there are plenty of other streamers scattered across other servers that are bringing their community into the game with them, some of them with a much higher viewer count than the streamers in the contest.

After watching the North American Battle For New World since the closed beta started, I’ve come to the conclusion the event is worth more to the developers as an analytical and testing tool than it ever was as a marketing tool. The closed beta ended on August 2,  a scant 29 days before New World releases. That doesn’t give a lot of time for the Amazon developers to sift through the two weeks’ worth of data. Focusing on the data from the streamers and their followers could allow the developers to not only narrow down the amount of data to sift through, but it could also give a much more thorough picture.

Many of the players checking out the beta will play through the whole time, but many casuals like myself will only play here and there. It’s players like the streamers and their community that will spend hours every day grinding through crafting and leveling that will actually notice the bugs and report them. The odds of someone like me coming across a major bug or issue with game mechanics will be fairly low, and actually realizing what I’ve found and reporting it is even lower. 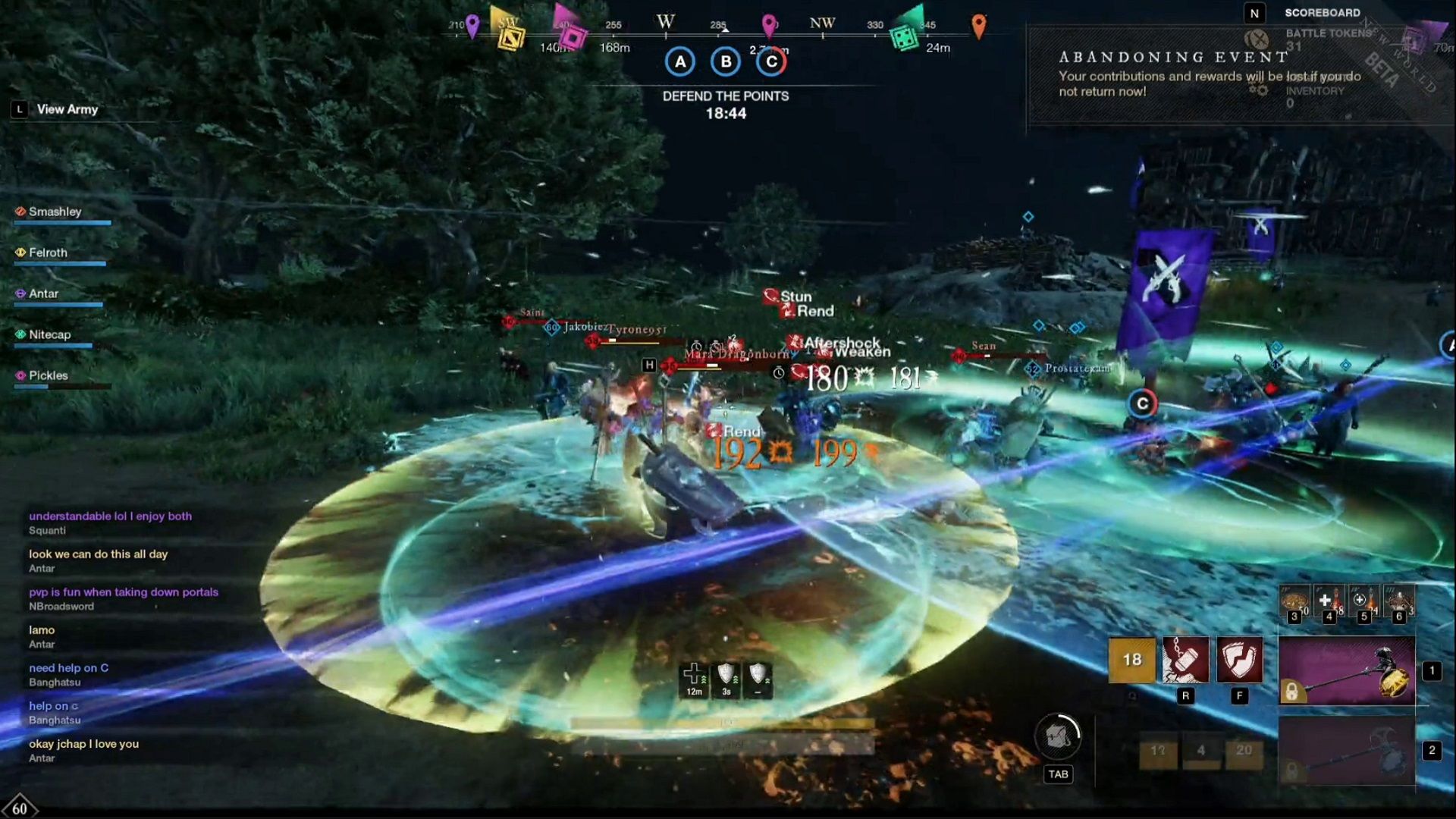 On the flip side, the contest streamers have had followers diligently gathering, crafting, and fighting throughout the entire beta. That means instead of thousands of people smashing a few rocks or cutting down a few trees, they have individuals who have gathered thousands of resources. Not only does this help in catching bugs and exploits, but it also gives a consistent flow of data that could help identify any drop rate issues.

The last area where the streamer data could help is overall balance. For example, as factions from all servers started declaring war, there appeared to be an overwhelming advantage for the defending group. Cries came in from far and wide that the defensive cannons were overpowered and attackers would never win a single battle.

The streamer server was no different at first. After just a couple of battles, many of the contest streamers were remarking about the balance issues between attack and defense, but by the end of the first week, the Yama server was seeing multiple wars in a single day. As players became more comfortable with their roles, strategy started to overcome even the power of the cannons, and multiple attacks have now resulted in victory. 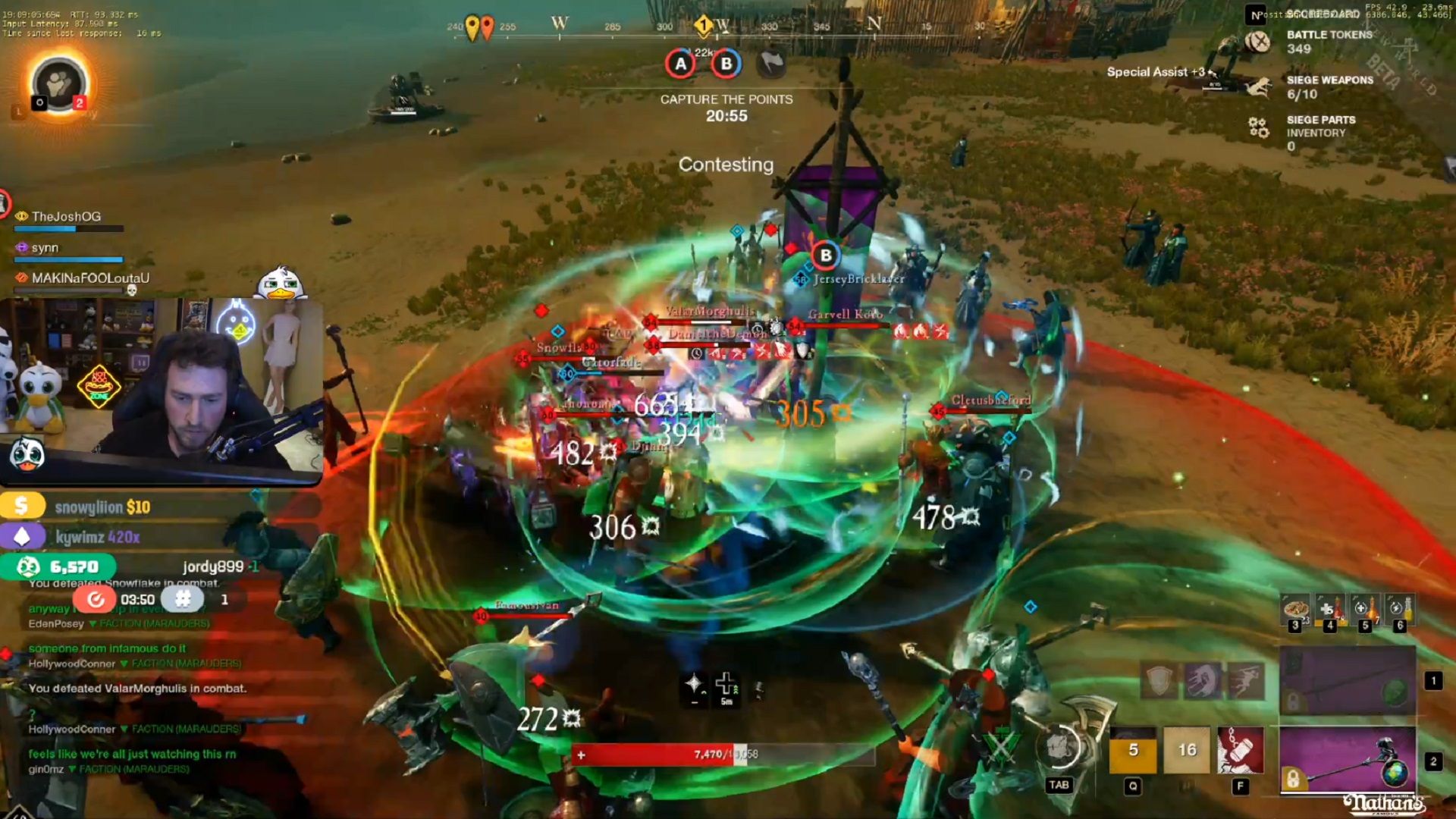 Marauder leader JoshOG fights to control the point on the way to a Marauder victory.

That overwhelming force of dedicated people also meant that they were also able to claim victory in some of the hardest PvE content New World has to offer - Invasions. Without the sheer number of hours the BFNW streamers and their crews put in, we may not have seen this shift from automatic failure to possible victory. Without that extra data, Amazon Games may have overcompensated and pushed the balance pendulum too far in the other direction. It’s happened uncalculable time with other games, so why not here?

The Battle For New World didn’t just help Amazon Games, though. It also helped every consumer who is still sitting on the fence about buying New World when it releases. Not everyone can spend 10-12 hours a day playing during a beta. With the Battle For New World raging on, I was able to see facets of the gameplay that I still had questions about. For a game that started with a PvP focus, is there still something for PvE players to do? Yes, there are dungeons and invasions, and because of the BFNW, I was able to see them before making a purchase decision. Will someone focused on gathering, fishing, and/or crafting have a place in Aeternum? Absolutely.

Most of all, though, the Battle For New World was just plain fun. I didn’t have the time to sit in long queues, so I wasn’t able to participate on the Yama server. But there were streamers in both the Syndicate and Covenant factions that I watch regularly (and a few more now since seeing them in the contest), and I spent way more time than usual on Twitch watching them fight it out in the BFNW. 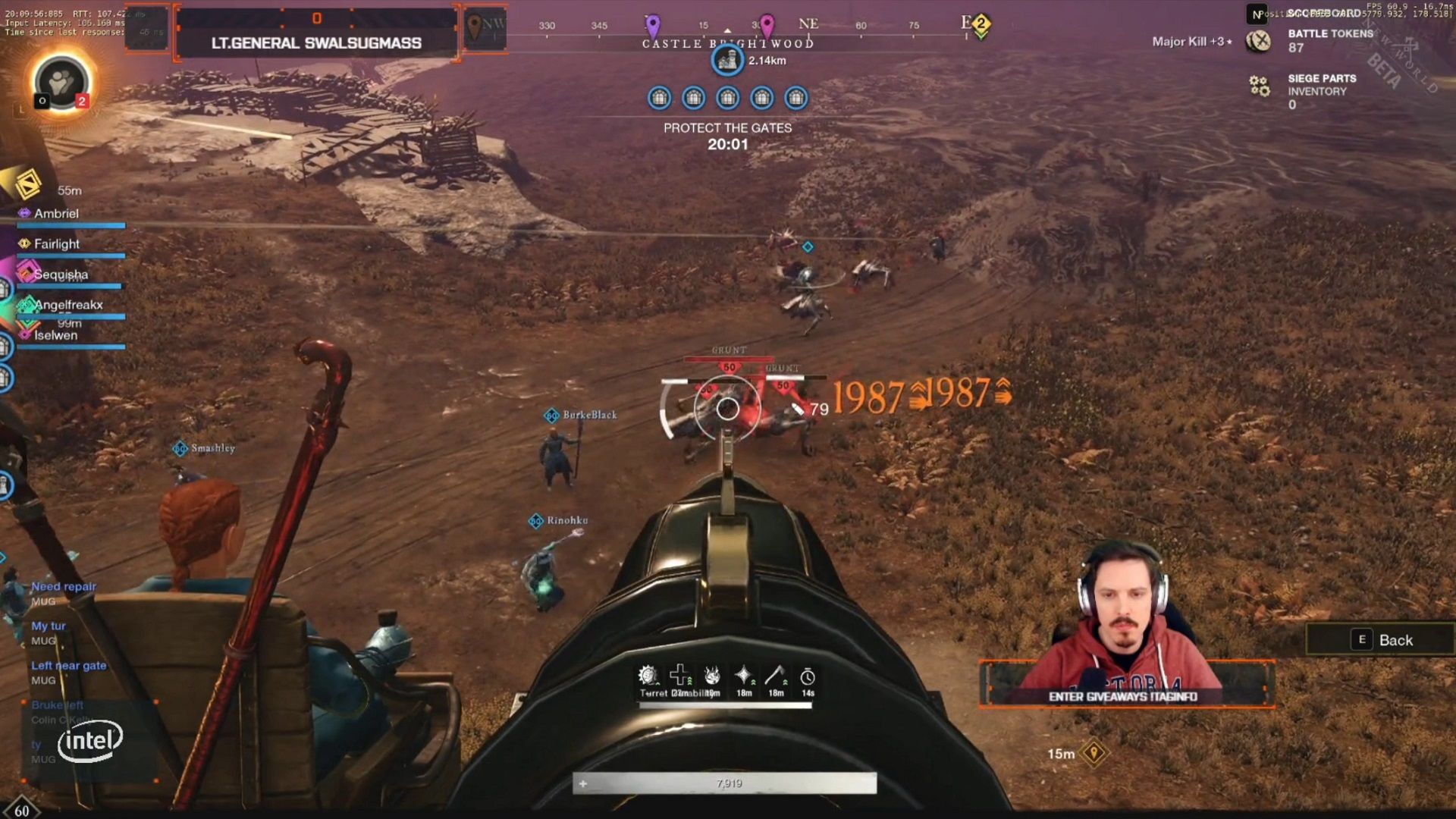 Covenant leader Sacriel jumps onto a repeater to help successfully fend off an Invasion.

Even as I was playing New World on a different server to avoid the queues, I had Twitch on in the background. When the Syndicate held off the Marauder attack in their first war, I was there. I was there when the Syndicate had their first successful attack. I was also there for their first defeat at the hands of the Marauders. And when my favorite streamers from the Syndicate and Covenant banded together to complete an Invasion, it was awesome to see content that I may never get to play. The highs were just as high and the lows just as low as they would be for any sports team I root for.