It’s probably a safe bet that any gamer reading this article has some exposure to Nintendo’s Pokémon games. Whether it’s an endearing tale from a childhood memory, playing along with one’s own children or minimally at least hearing about the creature collecting games.

In my case it was watching my own children grow-up with the franchise and partaking in some loose dabbling. My relationship with Temtem started way back in June of 2018 as I took part in the Kickstarter campaign by a company called Crema Games who was toting “a massively multiplayer creature-collection adventure inspired by Pokémon”. That game was Temtem, which just last week, moved into full release with version 1.0. Join me in this review in-progress as I re-take my first steps onto the Archipelago islands in what promises to be a full review of Temtem!

A Full Release, A Fresh Start

Back in February of this year I took an early look at Temtem in early access. While I wasn’t forced to, I decided to wipe my character from the server and start anew to get that “new player experience”. This is an intimidating approach as you’re only allowed one character and once you wipe it there’s of course no “undo”. After twenty hours in I can say I didn’t notice any “discernable” changes seven months later. But Crema has said they’ve revisited every area in the game and reduced the number of mandatory fights by 20% and adjusted the experience curve to compensate for this reduction, so they do listen to users. They’ve said these changes effectively mean that a player who battles every single NPC will have an easier path. Being a completionism, this is how I’ve been playing through the main quest.

Even though I started from scratch I retained a similar look on my avatar and the same name. The game starts out in typical Pokémon fashion. Your quest begins inside your house where your mother sends you on your way, with backpack in tow, off to tamer (a.k.a. trainer) school to become the best tamer you can be. You’re equipped with a “Tempedia”, akin to a Pokédex, and venture out where you first meet up with Professor Konstantinos who bestows upon you your first Temtem. You get to choose from one of three different Temtem types. In my first go around I chose the Mental type, Houchic. This time around I chose the Melee type, Smazee! My only reasoning was it sounded more “tank-like” and who doesn’t love seeing a chimpanzee-like creature smashing things?

You then battle with your rival, who’s also on the same trek as you, and you begin your journey. As my colleague Joseph Bradford mentioned in his editorial feature, it’s remarkable that the Pokémon company never stepped in on this narrative that sounds so familiar even in modern-day Pokémon games.

It's worth noting here that during the introduction you’re also given a second Temtem. That’s one of several unique things about the Temtem experience. You go into battles with two Temtem which adds another layer of strategy. Especially when you consider as your Temtem grows in experience, and yes, “evolves” they sometimes gain techniques that benefit from being paired up with a certain ally type. These mechanics have to be taken into account with the fact that each Temtem can only go into battle with four active techniques. Also worth noting, using a Temtem’s techniques uses up stamina which you must manage, or you will overexert your Temtem which means they skip a turn. 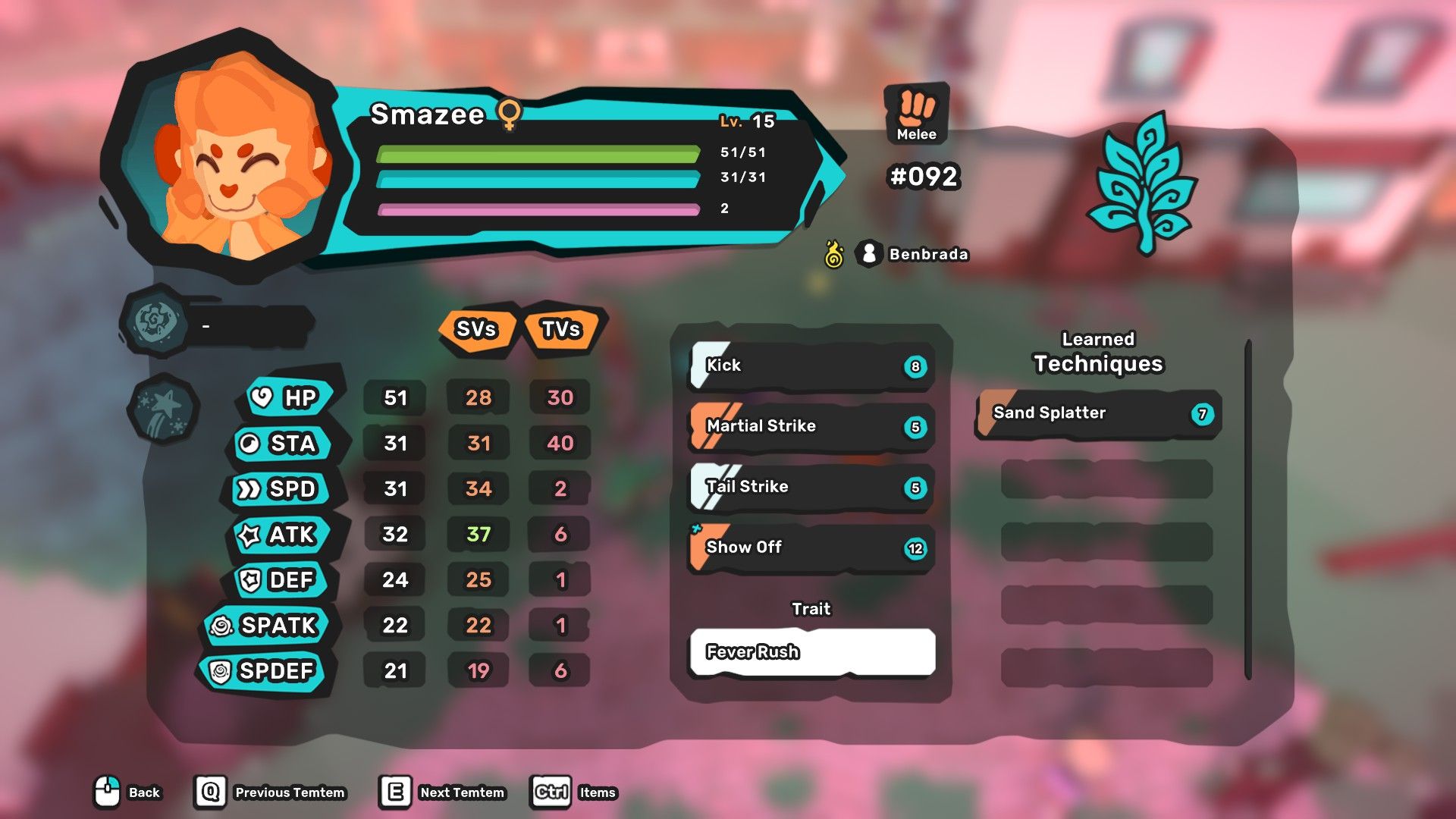 Another nice touch is that crops along the way is you’ll be able to equip items on your Temtem. These come in the form of things like an umbrella that gives your Temtem a 20% reduction water buff.

You’re guided along a main story quest path with several optional side quests along the way. In true Pokémon fashion the early stages of the game are quite repetitive. You travel from town to town, pick up optional side quests, trek through tall wild grass and encounter random wild Temtem to battle and catch. You’ll also have the mandatory tamer encounters, meaning other NPC tamers you must battle with to proceed. This is how you earn pansuns which is Temtem’s currency. This currency is used to buy healing and stamina potions and the like. Exploration is key as well as you might encounter a chest that contains some of these beneficial items.

The main story itself is a familiar and typical one, so much so, I sometimes just wanted to fly through the dialog. Some of the dialog seems to degrade to an adolescent level. Conversations like “We just lost.” followed by “Yes, I was there!”. I’ve not encountered any dialog yet that would be too offensive for older children, I’m thinking 10+ but we all parent differently. The worst I’ve encountered in that category would be words like “damn”.

Early on the maps are relatively large and it became a challenge to decide how long to spend on wild encounters in one area before moving up on the map towards the main quest’s current target. I’ve seen the game also throw out NPC encounters that have a varied range of levels of Temtem in one area. Sometimes, I’ve seen, as an example, level 8s used and then level 12s used. But these types of games have always been about keeping a balanced squad active so pulling out my higher leveled Temtem, albeit with reduced experience points, could get me out of a terrible tussle. 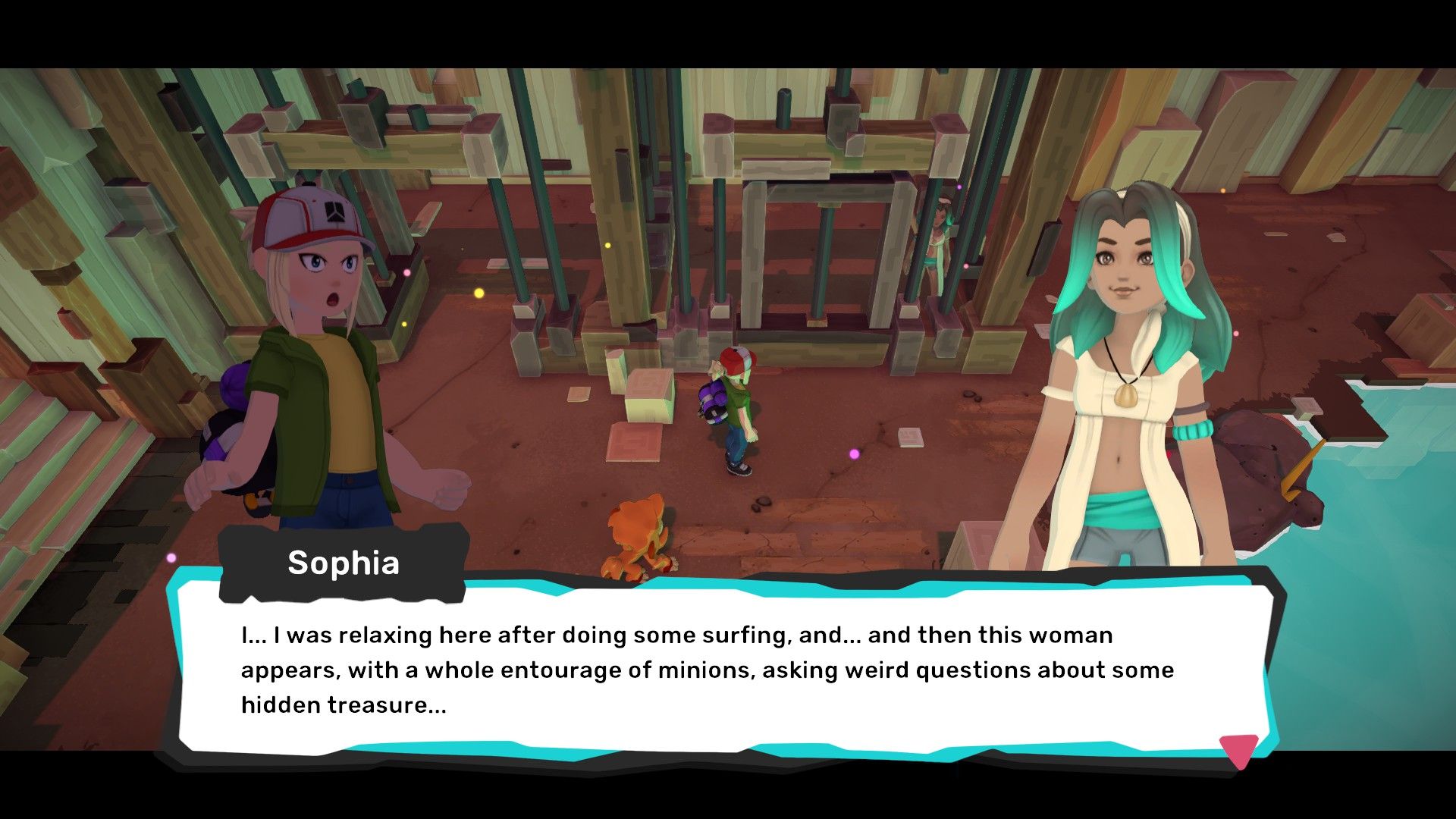 If you lose the health of all six of your Temtem in a battle you’re essentially defeated and respawn at the nearest “Temporium”. Temporiums are locations throughout the game’s towns where you can heal your Temtem at a HealTem and move available Temtem in and out of your active squad of six, free of charge.

The developers also considered the tedium of running back and forth across the map and having to run back to a HealTem all the time to replenish your squad. They’ve approached this in several ways. The first being your initial running speed seems much faster than other MMOs offer up in the early game without a mount. And yes, this game does have mounts, including surfboarding for water travel!

Also, later in the game you’ll earn a “Temessence Phial”. This is a vial that holds enough “essence” to heal your whole squad in the field outside of combat. This gets replenished at HealTem stations and by certain characters. The downside of this vial is it only contains a single dose but it’s still a welcome addition!

The initial experience has been fulfilling from an MMO perspective. It’s nice to see other tamers running around with their “main” Temtem trailing behind them. I also need to thank my colleague Joseph B. for pointing out that you can run up to a fellow tamer, see an eye icon, press the interact key and their Temtem’s info is stored in your Tempedia. 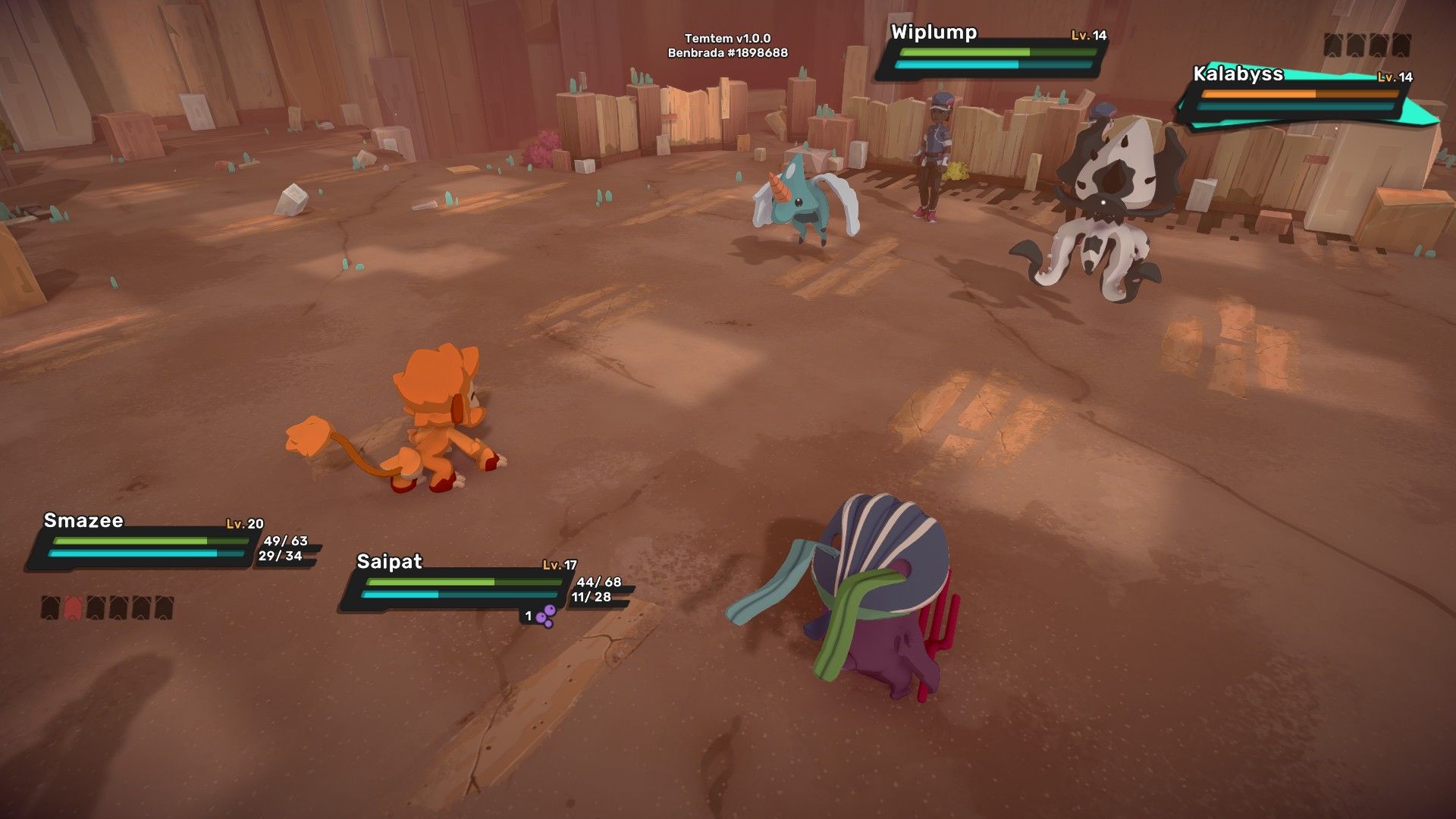 A Temtem NPC encounter, one of many

Other features you’d expect from an MMO are, e.g., “Clubs” which are akin to guilds in other games. You get access to a club chat where you can interact with other members, trade Temtems or battle other club members. The game also has seasonal competitions, tournaments, achievements, in the form of “Kudos”, different type of purchasable emotes, a friends’ list, and a cosmetic shop.

The developers have also put a lot of thought into the end game with “Tamer’s Island”. You’ll be able to get to this area via a quest after the credits roll. It includes six new repeatable activities that will be available to you.

Temtem also has premium cosmetic currency you can earn or buy with real money as well as a “Tamer Pass” (a.k.a. Battle Pass) with a free and premium track. The Tamer Pass also offers “Weekly Quests”, which includes four free quests and an additional four more quests to users who purchase the Premium track. Unfortunately, these don’t open up until the main quest scenario is completed.

Also worth mentioning, the game plays incredibly well on Steam Deck, which when I originally Kickstarted I had gone for the Nintendo Switch version for the portability. I’ve since then changed my pledge to Steam to play on the Steam Deck. Version 1.0 is fully “Steam Deck Verified”.

In the forthcoming wrap-up of this full review, I hope to have opened the end game features like Tamer’s Island and weekly quests. In the meantime, if you’re even a moderate fan of Pokémon games then I can highly recommend you check out the current Temtem release which is out on several platforms!