Swords of Legends Online is a weird MMO for me. On one hand it is a beautiful world full of interesting locations to explore, as well as some incredibly awe-inspiring landscapes. However, the lack of a West coast server, as well as a general absence of polish throughout the MMO sours the experience thus far, making SOLO feel more like a slog than a joy for long stretches.

Don’t get me wrong: I do like the MMO overall. While I’m completely lost in spots from the story, which is based on a Chinese franchise that spans multiple media across games, television and movies, I have enjoyed the overall points. The world around you is under siege from entities seeking the Swords of Legends, injecting the world with Negative Qi. It’s a story about heroes, gods, and legendary weapons and while I’m intrigued in seeing how it progresses, I can’t help but feel lost at points.

That said, Swords of Legends Online does provide plenty to do in addition to the story quests. From its incredibly robust housing system to the PvP modes that define the later game, there is always something to strive for.

I’ve got about 20 hours into the MMO thus far for this review on my Spellsword, a class that focuses mainly on DPS, both ranged and melee, and I’ve had spurts where I felt as though I couldn’t put the MMO down. However, there are moments where I find myself dreading picking it back up purely because of the myriad issues with ping, performance and even the general lack of polish on the game.

We asked the developers about the server issues that the MMO saw at launch, and while the instability issues seem fixed, the ping on the North American server can sometimes make the MMO feel unplayable. Some days I’m seeing a ping of 95 – not great, but not earth shattering. However, more often than not I’m playing SOLO combating a ping of over 130, sometimes even approaching 200. Physically I’m on the other side of the country from the physical server (it’s in Virginia, I’m in Nevada), so there is always going to be a ping problem, but I can’t help but feel for our Oceania friends who are dealing with pings even higher.

At times the ping makes the otherwise excellent combat feel unresponsive, and while my framerate might stay above 60 in most spots, the ping introduces a stutter that has, on more than one occasion given me a headache while playing.

Additionally, while the voice overs are in English now, not everything has been swapped over from the original Chinese. Oftentimes voice lines from NPCs while running around the various towns and hubs in SOLO I’ll hear conversations in Chinese, or even when enemies are responding to something I did to them. Major characters also don’t have every VO line replaced, which does break a little bit of the immersion when everything up till that point in the conversation had been in English.

On the subject of the VO, it’s not bad, but it’s nothing to call home about either. From a localization standpoint it feels like the original Chinese was translated literally with no tweaking to make the dialogue sound like natural English as well, which can be a bit off putting as well. When Final Fantasy XIV sounds archaic, it does so by design and it fits perfectly in the world – when SOLO does it, the dialogue feels out of place and the result of a poor translation.

Cutscenes lack the polish you’d expect from a major release as well. During the beta I noted that it felt like whole audio tracks were missing from some cutscenes, as sound effects you’d expect to be present just weren’t there. Unfortunately this has carried over, with some cutscenes full of action sounding muffled or silent when you’d expect to hear footfalls and swords clashing. Additionally, some of the cutscenes cut dialogue off early, as if the pacing of the English VO doesn’t match that of the original Chinese and the MMO is smash cutting where it would have in the original language. As a result, there are spots where if you didn’t read the subtitles, you might miss whole story points if the cutscene moves on in the middle of a character’s line. 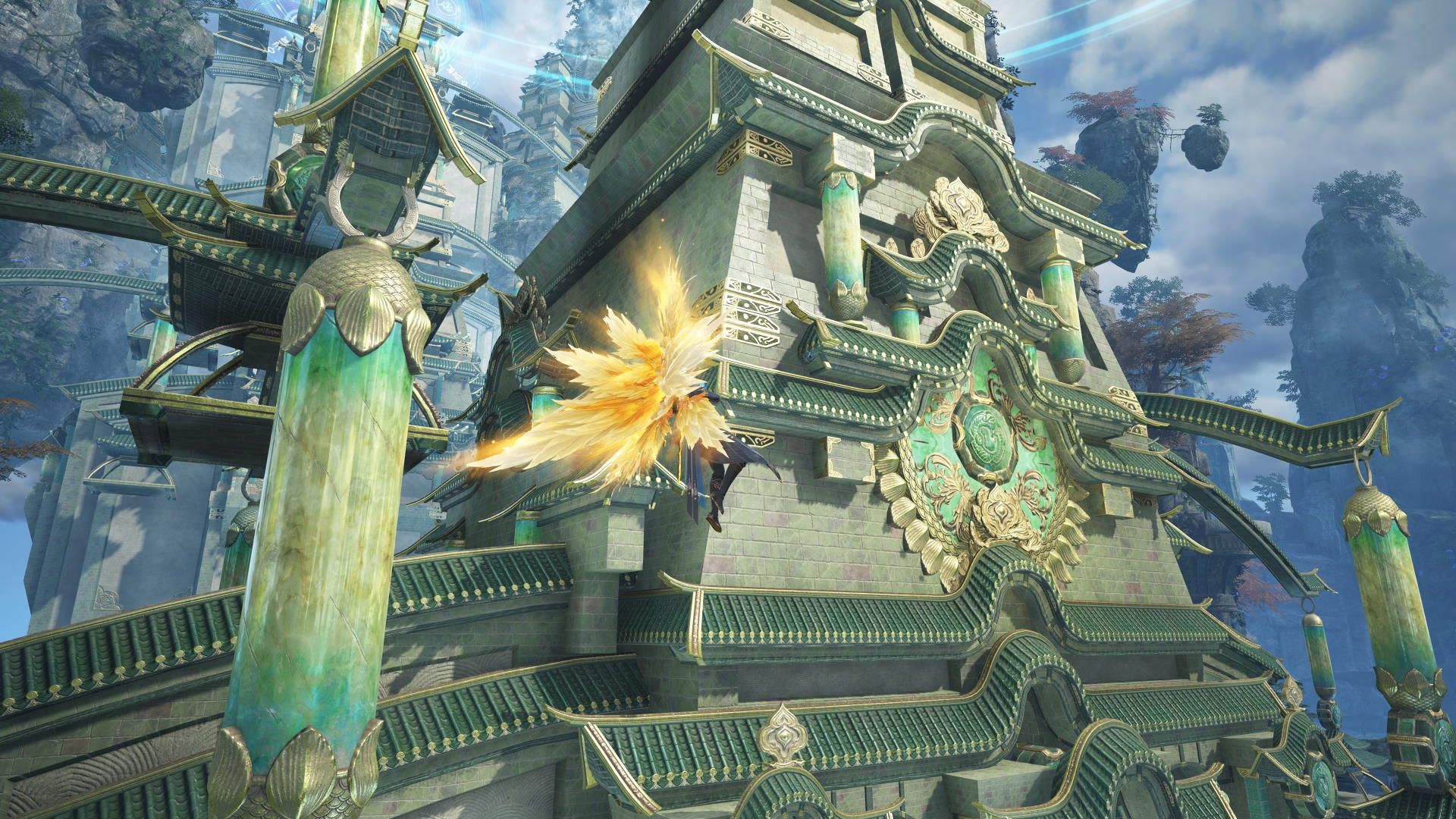 This isn’t to say that, again, Swords of Legends Online is a bad MMO. It’s really not. Combat is fluid, and when the ping plays nice it feels responsive. I still absolutely adore the movement and feeling of momentum I feel is missing in many other MMOs.

The progression does feel a little faster than it did in the beta as well. There are still spots where Swords of Legends Online doesn’t clearly tell you what you need to do to finish a quest, such as an early quest that has you jump into the first instance. Upon completion of the first dungeon you’d expect the quest to update, but you have to actually claim a reward from a separate screen altogether in order to progress – something the quest doesn’t say at all. It’s only thanks to players in the chat that some are able to move on and progress. Again, a general polish issue that affects the gameplay here.

Visually, while SOLO isn’t among the cutting edge of graphics in the MMO space, it’s still an incredibly attractive game. I think the look and feel of Sunken Jade Lake, the Spellsword’s class area, is one of my new favorite spots in games, as it’s absolutely picturesque. The frozen lake with the giant sword sticking up from the ground towards the sky creates a domineering, yet beautiful picture. Cloudrise, one of the major hubs in SOLO is absolutely majestic, and I’ve found myself flying around with my sprouted wings just enjoying the views and vistas of the area.

All in all, I am enjoying my time in Swords of Legends Online. It has issues most definitely. Hopefully though as this review progresses the polish can be stepped up and the issues with connection and performance ironed out so that the MMO feels as beautiful to play as it is to behold. For now, I’ll continue my quest to rid the world of the Negative Qi while diving into the PvP, pet system and getting my head around the incredible robust housing system for our full review.