In this column’s last instalment I talked about MMORPG fatigue, hoping that I would at least get a few ‘yeah mate, I’ve been there’ nods. You know, to feel less like a whiny xennial complaining about his precious first-world problems. For THIS column, I’ve decided to portray the ‘overly excited about silly game details’ kind of xennial. I think that role fits me much better. So… what do you all think about MMORPG map sizes? I for one think that they are quite important – paramount even – to immerse the player in the MMO world that you’ve created for them. To bring meaning to the first ‘M’ of the moniker, the ‘massive’ part. To create atmosphere. To have enough space to fill your world with actually interesting things like points of interest, fluff and settlements. Star Wars: The Old Republic does an excellent job at all of that, if I may say so.

A game that does the opposite of an excellent job at juggling its map size and the content therein is Final Fantasy XIV. I don’t mean to disparage the game, and I’m aware criticising it almost amounts to a declaration of war against its fanbase, it’s just that FFXIV was the MMO that I played right before jumping back into SW:TOR. I really wanted to like it, as so many acquaintances of mine told me that it’s the best game of its kind on the market in 2020, but… it just really wasn’t for me. A huge part of my disappointment wasn’t necessarily the map sizes per se, but rather how they were all glorified corridors, or tubes, or tunnels. It’s a neat illusion of size, but once you realise it’s an illusion, the illusion can not be unseen. 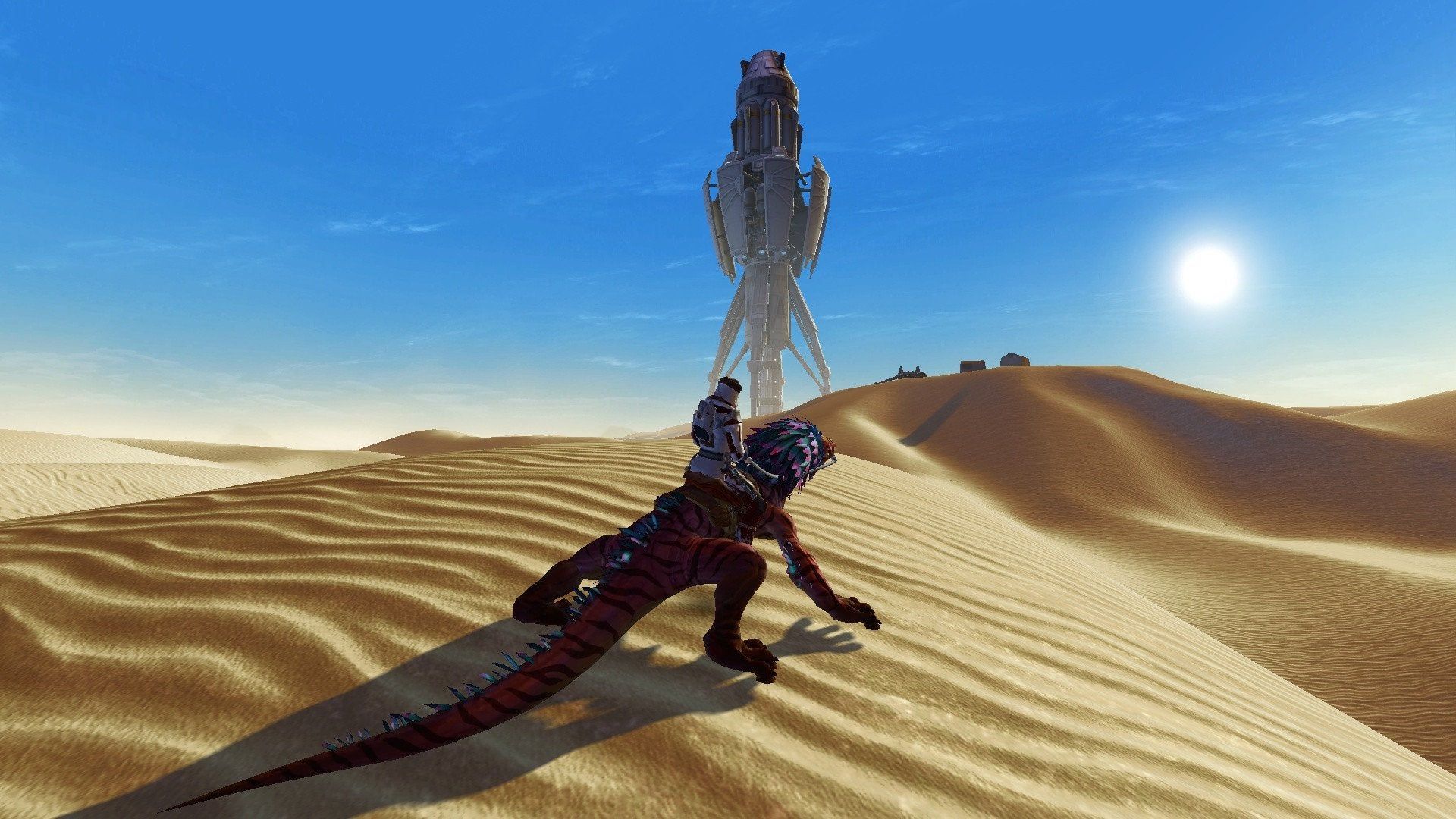 Not so in SW:TOR. I fondly remember the first time cruising on Tatooine when SW:TOR came out, back in 2011. There was desert to the left of me, desert to right of me, desert in the back, desert in the front. All that desert sand may be coarse and rough and irritating and get everywhere, yet at the same time, you could indeed get everywhere! It was refreshing to be able to swerve off-road without bouncing into artificial barriers after only a short excursion. Going off the beaten track is a big pastime of many MMORPG players, and I’m no exception. Finding a hidden cave, one or two easter eggs that the developers left for explorer-archetype players to discover; little additions like those two help breathe life into even the worst MMORPG.

To be frank and to be fair, Star Wars: The Old Republic  is not without its own sins. Its urban maps are often as tunnely (that’s a word now) as those in FFXIV, and the only way for me to reconcile this is to convince myself that cities are often divided into blocks, players are navigating the streets of these blocks, the houses of these blocks are natural barriers, and the logical result of all of that is that those maps HAVE to give off a tunnel-like vibe. It may be a shaky excuse, but it’s an excuse nonetheless. When you’re NOT on one of those urban maps though, the map immersion my favourite sci-fi MMORPG after Wildstar is offering is truly beautiful.

The map of Alderaan is another good example of said beauty. If you haven’t experienced it yourself, one of its more impressive features are the long roads leading you from the zone’s star port and relatively urban surroundings into boreal valleys, from those valleys into the hills, and from the hills into the famed Alderaan mountains (you know, where they produce Perri-Air). That whole journey, if on foot, will probably take you about 20-30 minutes. I know that some aren’t very found of long treks and would rather jump straight to the action. For nerds like me, this is the kind of scope that makes me feel like I’m actually traversing a planet and not a fake Hollywood set meant to delude me into thinking that the world I am supposed to be drawn in to is as vast as the ocean, when in reality it consists of little more than smoke and mirrors.

There is only one other MMORPG that I’ve played recently that can compete with the feeling of immersion that SW:TOR maps give me, and that game is Elder Scrolls Online. But that’s a different story, meant for a different column. That’s a spoiler, by the way.

Look at me, pretending my articles are famous enough for people to become excited about such reveals. Anyway. Hope to see you in one of those sexy SW:TOR maps very soon, ladies and gentlemen. In the meantime, what’s some of your favourite maps in MMOs? I’d be eager to explore them if you know of some that would blow away my mind.