I play several MMOs at once. Not only do I love superheroes, comic books and DC Universe Online but I also have a soft spot for Star Wars “things”. It should come as no surprise that another favorite MMO of mine is Star Wars: The Old Republic (SWToR). SWToR’s latest recurring event, “Pirate Incursion”, ended. As I played through it “again” I was asking myself, are recurring events in MMOs “fun” or just another “chore”? 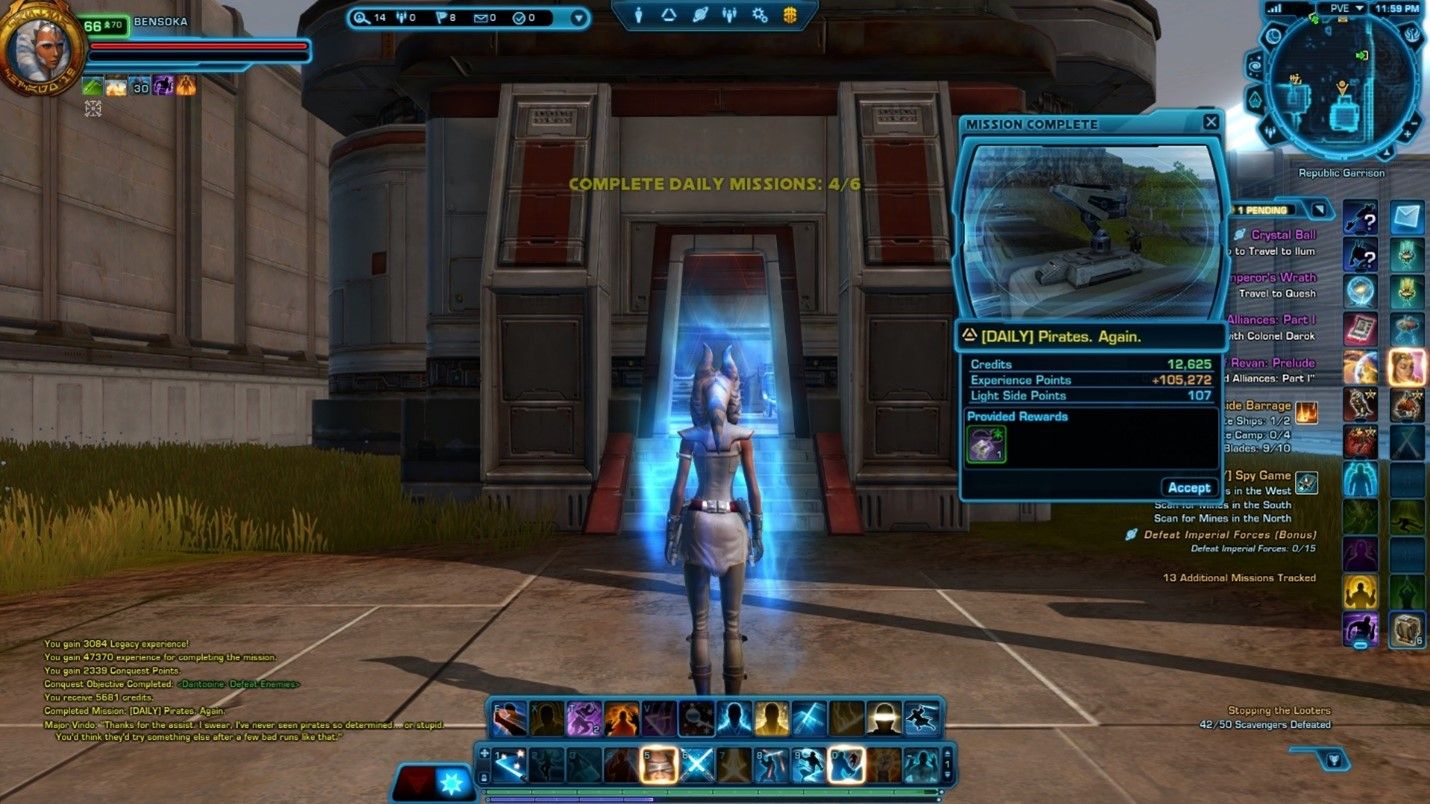 “Pirate Incursion” is intended for player characters that are level 20 or higher. The story setup revolves around playing on the remote planet Dantooine. Dantooine is caught in the escalating hostilities between the Galactic Republic and the Sith Empire. A secret group called the Nova Blades have been “stoking the fires” and have perpetuated all guns blazing attacks on this Republic world. As the Republic attempts to defend this key territory, the Empire plans to take advantage of the chaos and deal major damage to the planet in hopes of swaying control in their favor. This is where you’re called in to quell the Nova Blades. 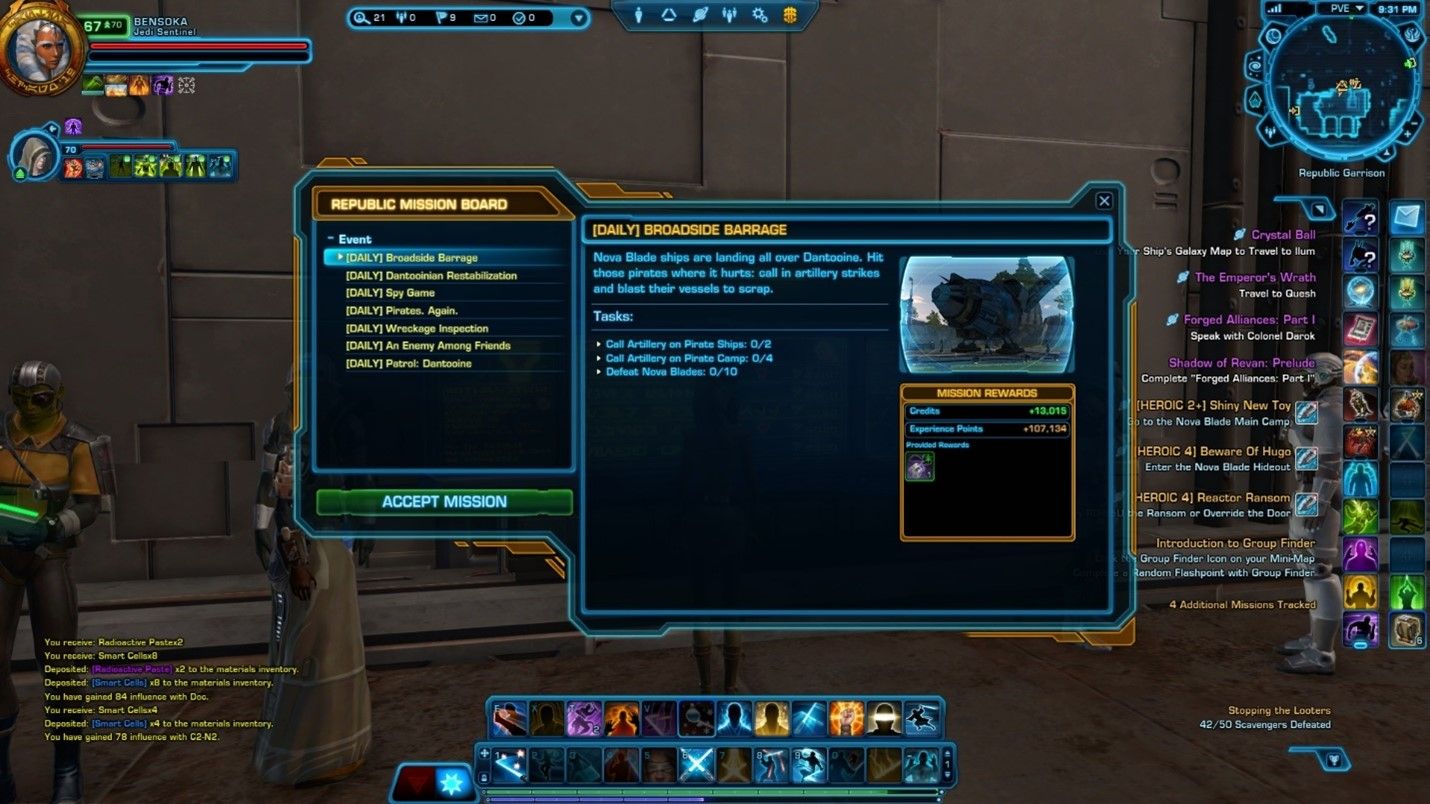 This recurring event centers around performing a set of daily quests, group quests, a daily combined quest and then there is a weekly compound quest.

There are 6 normal daily quests which are different for the Republic side and the Imperial side. These quests can be easily soloed with your favorite companion. My favorite of these is “Pirates. Again.” Where you get to take manual control of a turret and shoot down waves of Nova Blades. It’s short, fun, and the mechanics are different outside of the games’ typica story driven missions. This is the first daily quest I do everyday during this event. 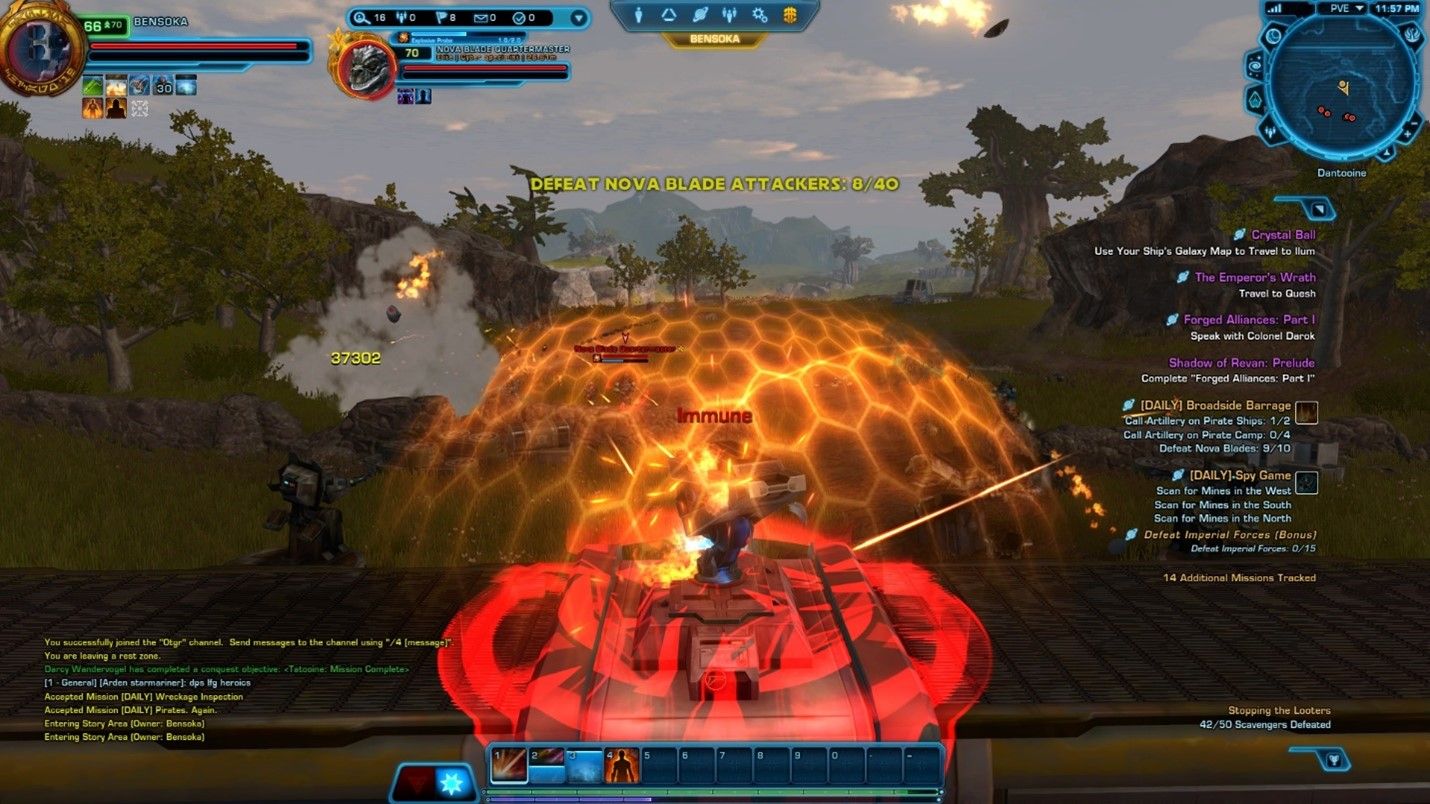 Turret on full! Gun down those pirates!

There are also three “heroic” quests which are meant for a group of 2-4 real life players. These are group instances with mobs that are typically harder than normal. This event’s heroic quests seem harder than SWToR’s standard heroic quests, which can sometimes be soloed with your companion. The heroics are fun and are a necessity if you want to complete the weekly event mission that yields large “favor” (more on that below).

SWToR’s grouping tools are lacking so most groups for these heroics are formed old-school via chat. In the Dantooine zone there’s usually always someone looking to group up, at least during peak hours.

The weekly event mission requires that you complete any 10 daily missions and any 5 heroic missions. It’ll take minimally two days’ worth of quests to accomplish this. There is also a daily “wrap-up” quest that requires you to complete 6 daily missions. Ironically, this is exactly the number of solo-able daily missions there are in a single day.

What Spoils Ye Be Plundering? 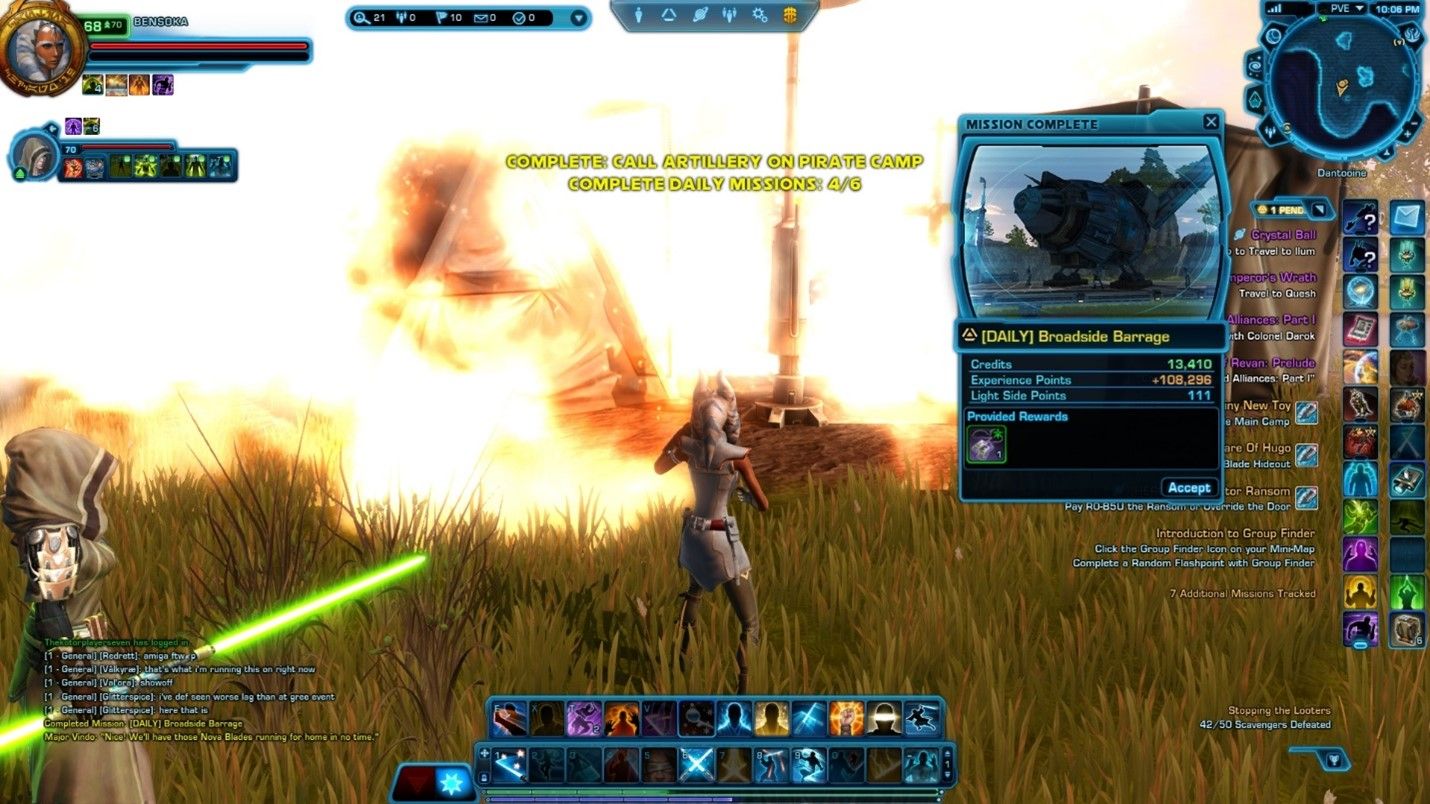 So, what does all this work yield? Typically, event tokens and major amounts of “reputation” which is favor with a certain faction. Those reputation points can lead to achievements by raising your standing which leads to being able to purchase event items from a reputation vendor. There are also several other in-game event achievements not tied to reputation.

Reputation is legacy wide, to mean, account level. This means you can run several alts through the content in the same day until you hit a weekly reputation cap, typically about 17,500.

Typically, every time a recurring event comes around the development team adds new gear and achievements you can acquire. Typical items you can buy with reputation tokens and the proper standing are things like; Nova Blade and Dantooine Homesteader Armor Sets, an Ugnaught Companion, a Walker Mount, Kath Hound Mount, Kath Hound Mini-pet, Dantooine-inspired Stronghold Decorations.

When Does “Fun” Become A Chore? 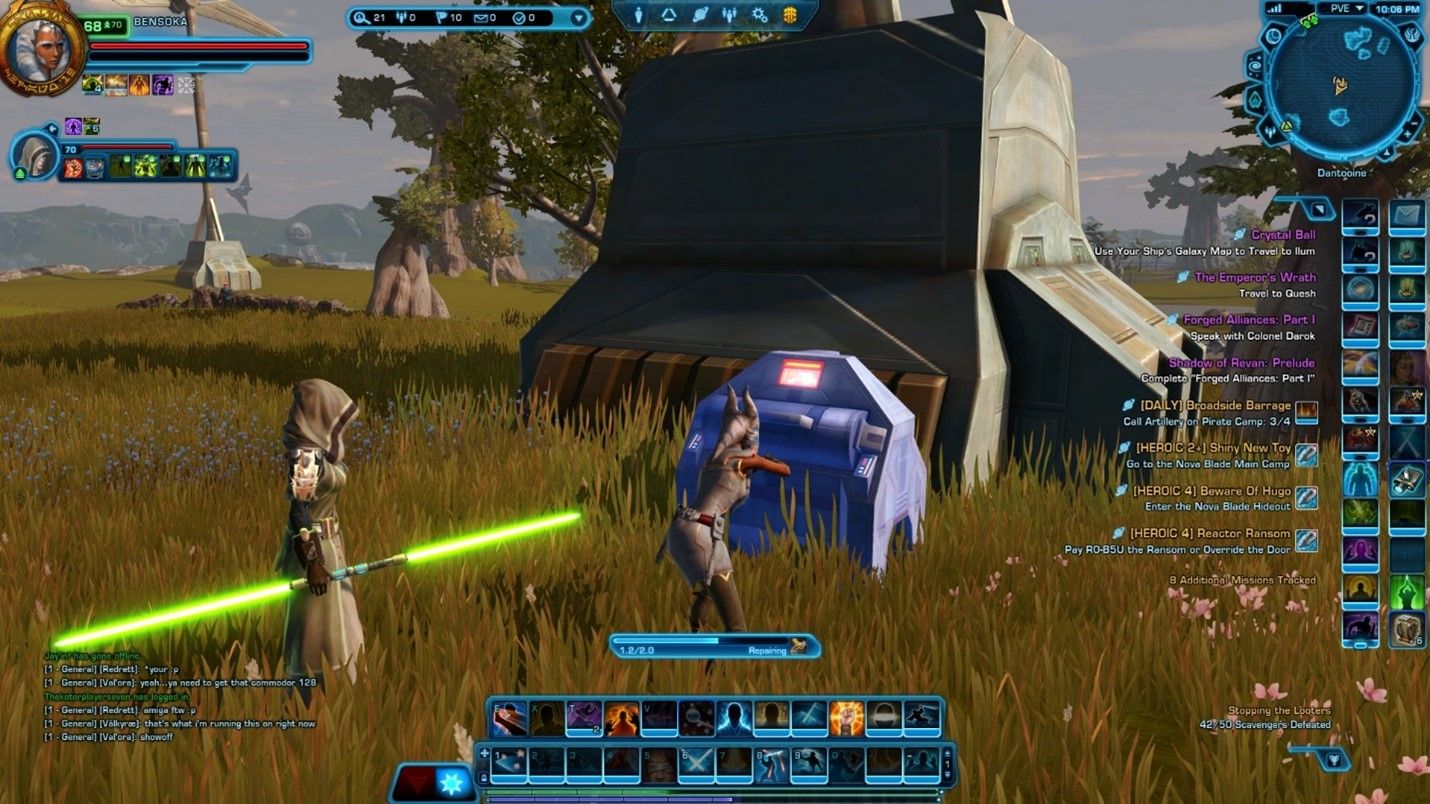 These types of recurring events tempt you with reputation items that make your mouth drool, especially if you’re a completionist. The unfortunate part is that all the highly desirable items require a higher standing and a lot of reputation. If you’re just coming into a recurring event like this then you’ll need to participate in the event several times. So depending on the occurrence of the event that could be once a year, or a few times a year like “Pirate Incursion”.

There’s also the possibility of continuing to build faction with this group outside the recurring event parameters. Typically doing normal quest and daily missions for that faction, but then again there’s that word “daily”. 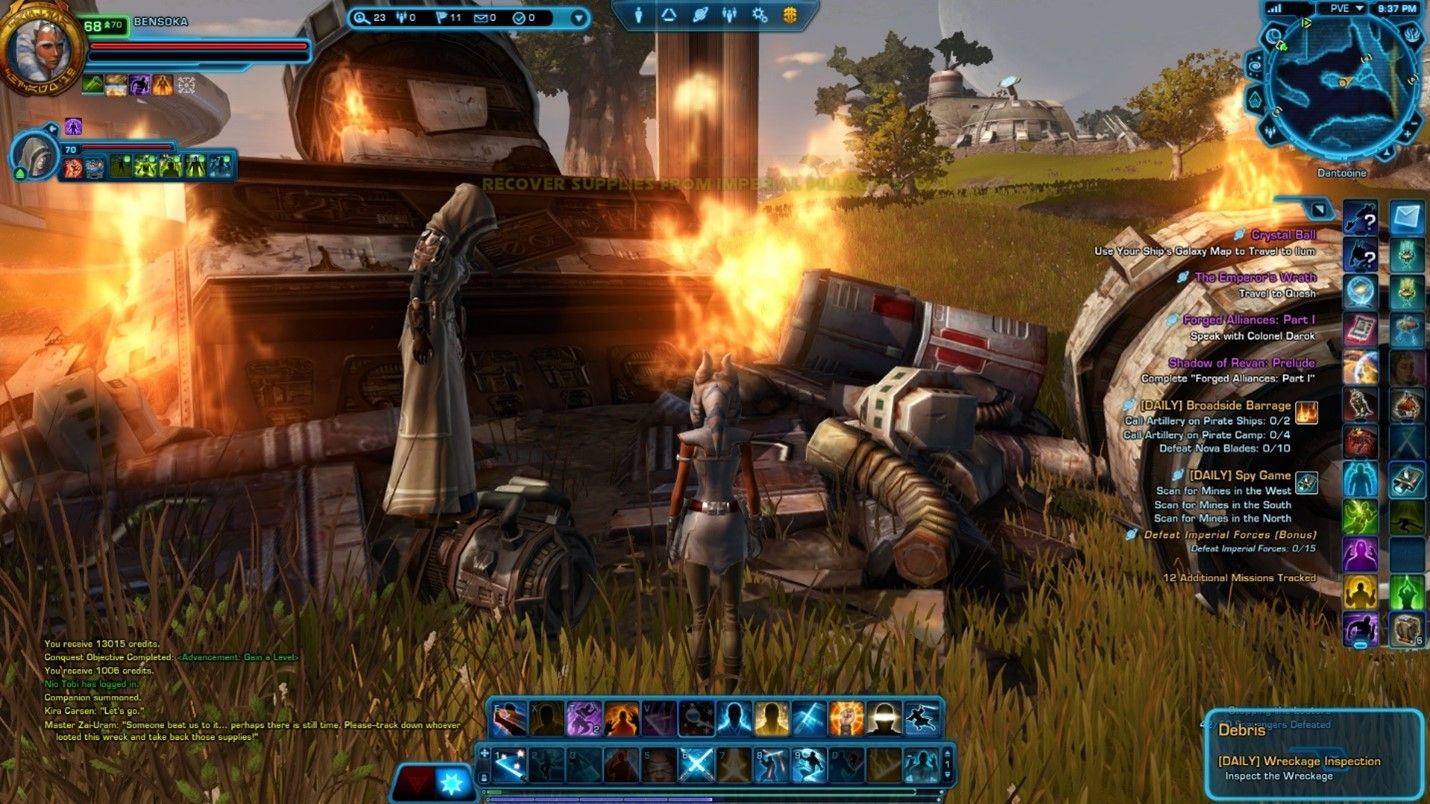 To be honest by the end of the event doing dailies becomes more mechanical than “fun”. I usually know where I need to travel to, where certain mobs will be, etc. Of course, everyone else knows that same information so sometimes we tend to fight over certain mobs.

Another complaint of mine is that the weekly quest that yields a large portion of favor is bound to doing 5 heroic missions. To me this means “forced grouping”. Before you pounce on me about games catering to solo players, blah, blah, blah and remind me that “MMO” means “multi-player” just know I’m not advocating never to group.

I feel like I get more bang for my game time when grouping is a choice, and I can choose the “when”. Grouping to me isn’t always easy to do based on time, etc. On top of that SWToR doesn’t have the best grouping tools. It usually boils down to grouping up old-school through chat which can take a while to organize. Also being in a like-minded guild can help. I’m in a large guild but it didn’t seem like a lot guildmates were partaking in this event or maybe didn’t know about it.

I know SWToR is a ten-year old game but I’m just questioning game design in general. Why not have two weekly missions and you can do one or the other? One focuses more on doing heroic missions while the other is attainable via other mission means. Or why not have these weeklies attached to some world event mission?

Sure, I’m not forced to participate in these recurring events, but it seems like a lot of people do. And to be honest there are some rewards from these that I truly desire. I take the approach that I’ll partake in them moderately so I can still do other things in game those same event days. Based on that choice I feel I retain more of the “fun factor” versus creating a chore. How do you feel about “recurring events”?