RimWorld is easily one of the best games of the decade in my book.  It excellently captures so many of the key elements I look for in a great long-lasting game.  The graphics are simple and straightforward, as are the mechanics of the game.  It’s an easy game to learn to play, but the depth comes from the dynamically generated content and the myriad of ways the various game systems interact.

I don’t want to minimize Tynan’s brilliance or game design chops in anyway when I say that each system in the game is straightforward enough that I think most decent coders could implement something similar in their language of choice.  That’s actually the genius of the design and where RimWorld really shows its true elegance.

Designing with intent to execute a specific desired element is far more difficult than writing mountains of random code and making a simple concept as complex as possible.  Sometimes it’s necessary, but quality shows in clean intentional lines in RimWorld.  I love it, and I find that it’s something I increasingly appreciate every time I decide to pick the game back up.

Even more, Tynan Sylvester shows his masterful grasp of his profession in patches like the one this May.  This article will explore some of the new features introduced in the patch.  In part, it’s informative for those who haven’t heard about the patch yet and might be inspired to pick the game back up.  Though, I won’t conceal that in part it’s an homage to intelligent game design, project management, and a generally incredible game.

The first subject is just an appreciation for Tynan’s project management and intelligent design choices.  It’ll make more sense as we get into the specifics of the patch, but I wanted to call reader’s attention to this specific point first.  It’s an important component for understanding why I’m so supportive of this game.

In his video introducing the patch, Tynan notes his current design goals are to expand player choices and increase the number of play paths for players.  This is key, because it means every new mechanic introduced, will probably be later expanded to allow players multiple paths of access.

This key element increases they variability of the already wildly dynamic game, pushing replay value of RimWorld to an even higher level.  I’ve noted before that I place value games by requiring that they provide me with at least one hour of entertainment for each $1 spent in the purchase.  That means I buy copies of RimWorld for any of the nieces or nephews who might want it whether the game is on sale at the time or not.  I’ve spent enough time on my copy to buy for dozens of kids and friends without blinking.

The game is that good, and Tynan’s remarkable design choices that specifically and constantly increasing the playstyle options for the player is precisely why I’ve spent so many hundreds of hours in the game between multiple accounts.  More incredible is that all but a very few of those hours are sans any mods.

The Royalty expansion opened up incredibly cool mechanics, and I gushed about those inappropriately in a previous article, but the one issue was that some of those mechanics were locked by a requirement that the player maintain a relationship with the global empire.  You could slot psychic enhancers outside imperial requirements, but the resulting reputation hit meant you were getting on the bad side of the only global superpower.

May’s patch changes that.  No longer are players forced to kneel before the imperial throne to legally advance their psychic abilities.  The new system includes a natural path for advancing, and that additional source of power frees the player from forced relations with the empire. 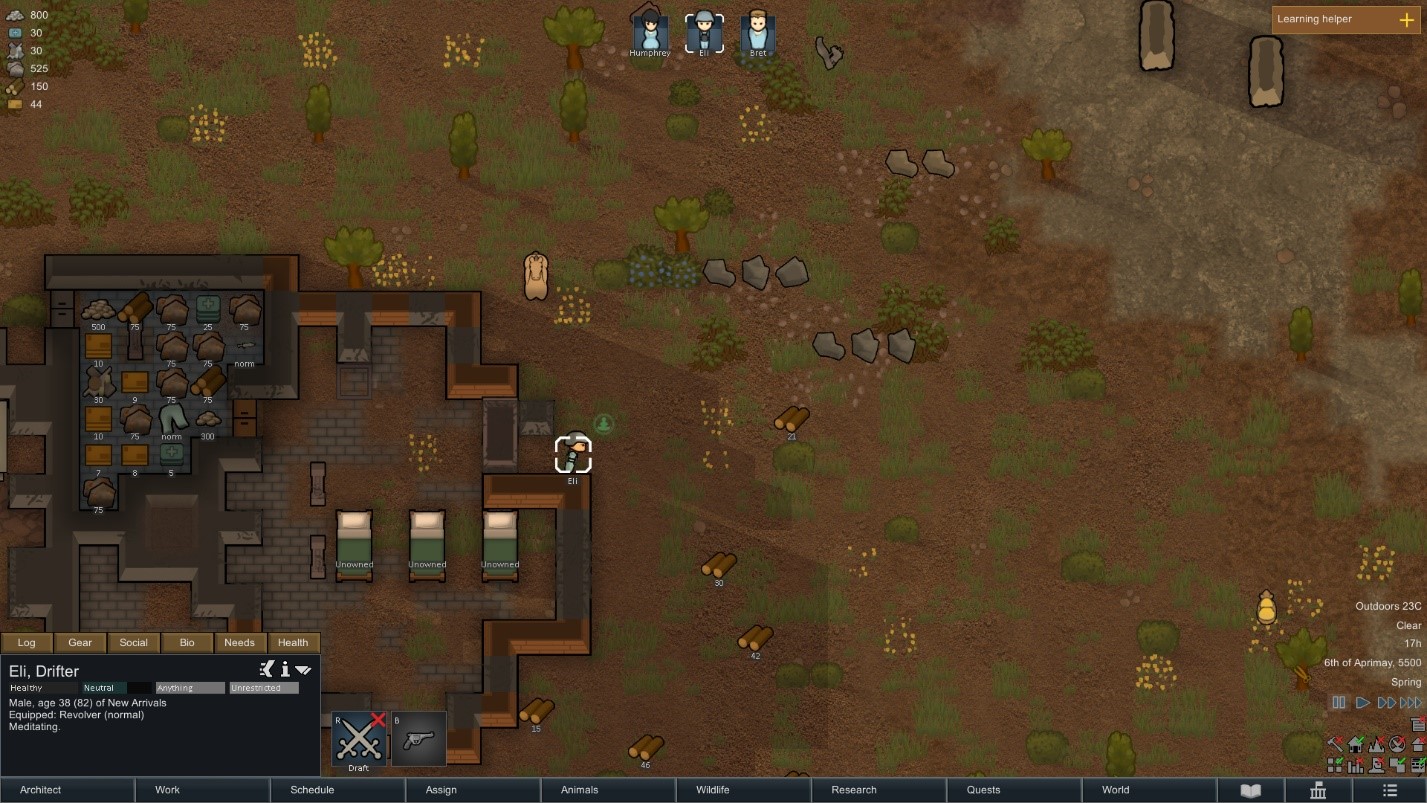 Meditation can be done nearly anywhere, but specific character traits will hint at what more individually effective locations might be.

More critically, it enables the psycaster option for characters who wouldn’t have made great candidates before.  This creates more flexibility in what different characters can be used for, opening new doors for choices in how the player wants to build and run their communities in RimWorld.

Part of the new system is that psychic power is constrained by two components.  Psyfocus, a measure of current available psychic power, or how many times you can use currently known psychic abilities.  The other component, heat, replaces Psychic Entropy as the limit on how quickly a character can use psychic abilities, preventing back-to-back spamming of abilities.

Psyfocus is an usable, but renewable, resource that’s expended with each cast.  To build up more psyfocus, the character needs to meditate, which is also a system expanded beyond just that basic functionality, too.  Psychic heat won’t kill a character or hurt them in the way that entropy would.  A character simply passes out and remains unconscious for about a day.  Tynan notes in his May video that some players have even used this as way to save characters being chased by enraged creatures, which will ignore any downed characters.

Characters can meditate using the system established by the Royalty DLC, which is to sit on their throne in a throne room.  For characters with imperial rank, that system is now more a meditative than a “ruling” mechanic, but it’s one way to increase Psyfocus for some characters.

Characters with tribal traits can meditate in nature, using any space with no crafted or disturbed features.  That’s not all, though.  Characters who are psychotic have their own form of meditation, and so do characters who are artistic.  New meditation options are opening up for different character traits, which also creates some cool gameplay options.  For instance, I might start a new colony of ascetic psychic monks or maybe an art academy for the psychically advanced.

New abilities have been added to the game, which expand the psychic system quite a lot.  One replaces the ability to share entropy between characters in order to simply dump heat into another character.  I like this one a lot because it reminds me of fantasy settings where the head wizard is pulling power from his disciples and they collapse under the strain one by one.  It feels like a good way to build an additional sense of story into your play-throughs, not to mention being a great new mechanic in general.

Other abilities include combat options, such as creating a localized flash storm.  It’s a great way to soften up raiders as they prepare to attack the settlement or deal with other aggressive mobs when you can pin them into a confined area.  There’s also a new bullet shield ability, which could be a lot of fun to play with. These aren’t what I’m most excited about, though. 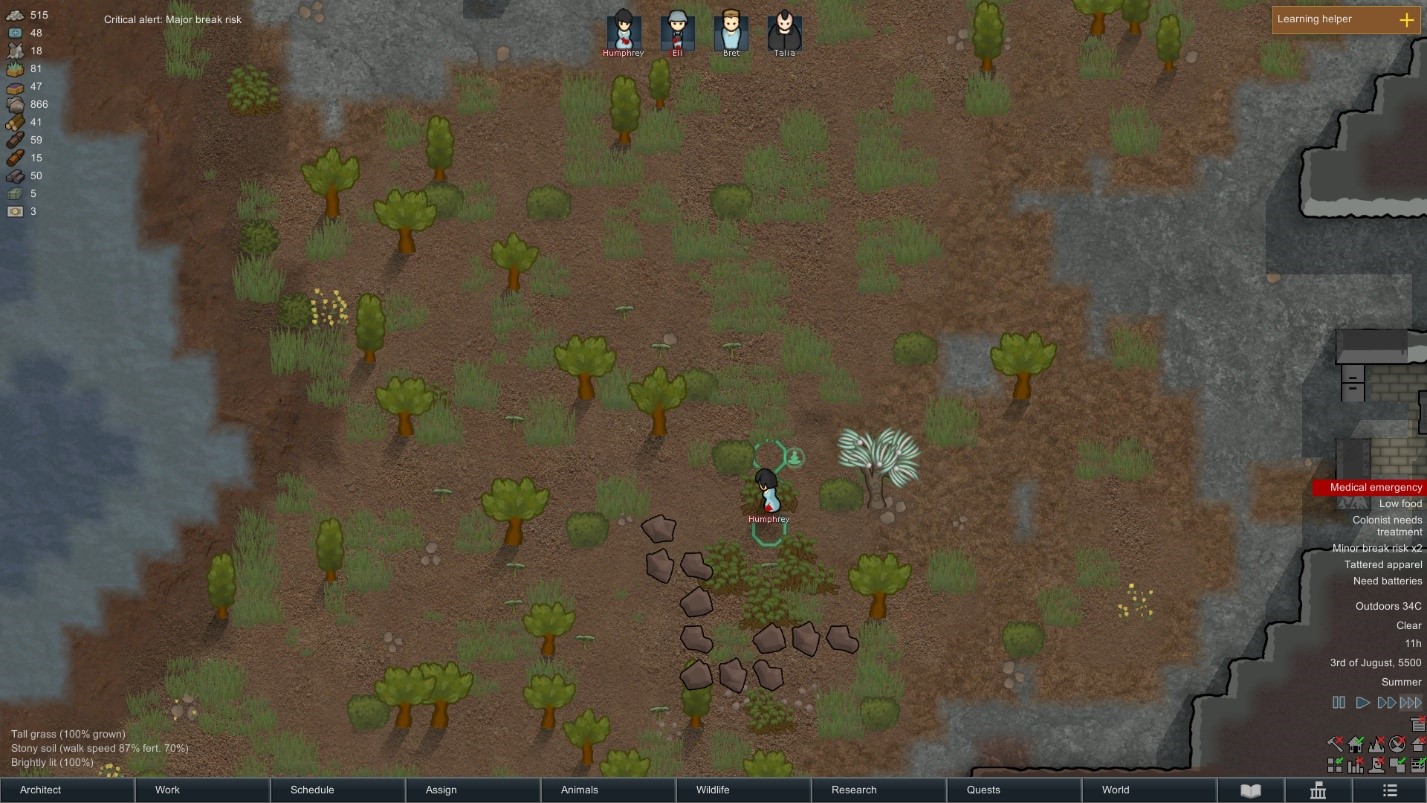 The more exciting abilities are those like new psychic skill that allows you to pull water from one source and teleport it to another location, and it will be really helpful for putting out fires.  There’s also an ability that teleports the character and not just water.  Then, there’s the existing abilities like pain block.

Abilities that have a combat function, but that also be used to support the colony in some way are very cool.  The abilities that only exist to support the colony are even more interesting, I think.  It shows that Tynan is looking to expand the system so that psycasters can have a utility side that has nothing to do with combat and that makes me so excited.  It creates the opportunity for communities of mutually supportive hedge wizards all puttering around their village and helping out with their various utilitarian spells.

A new system even exists to both advance psycasters and grant them access to more abilities, and to convert normal characters into psycasters.  Anima grass grows around the new natural anima tree that exists on each map.  The grass is then used in a ritual at the tree to advance a character in their psychic abilities, or to gain access to them in the first place with non-psychically active characters. 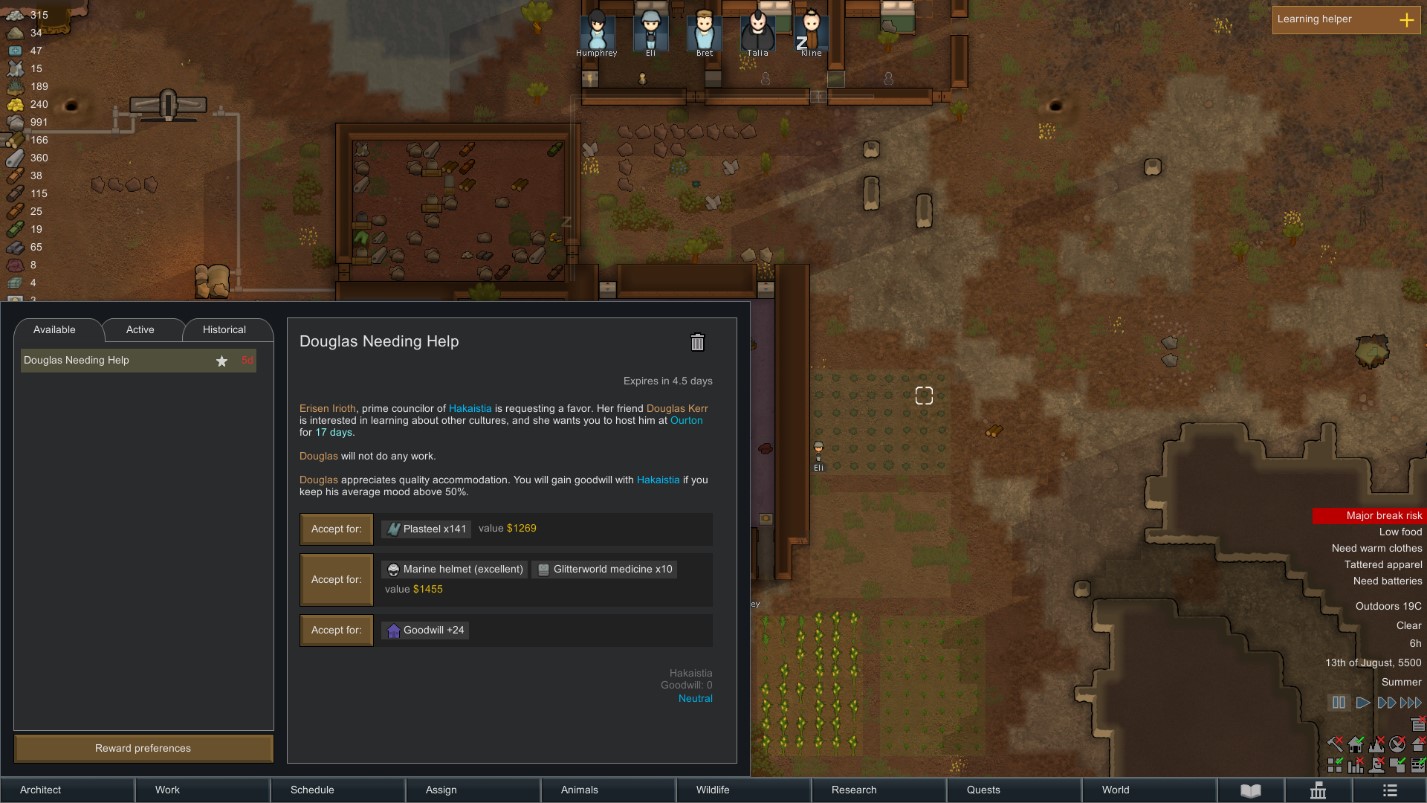 An updated quest system with selectable awards is just one of several changes in May’s patch.

I’ve barely even touched on the updates in this patch.  The modified psychic system was a large part of the patch and composed some of the changes I found most exciting, but there are a lot more that I just don’t have time to mention.  So many aspects of the game have been improved that I can’t cover them all.

If you’re a fan of the game and haven’t picked it up on a while, go for it.  You’ll love this patch and you’re going to really have a lot of fun.  If you don’t own the game and aren’t sure whether or not to pick it up, there are always the caveats that have to be considered.

First, the art in this game is good and fits the theme, but this isn’t a triple-A title with millions of dollars in the art budget.  The game can also be unforgiving, and you will accidentally starve your colony by accidentally converting your food storage into a jail, making all food off limits to colonists.  Not that such a thing has ever happened to me, but I’ve had friends who’ve done it.  Absolutely, nothing to look at here.

If you can get past the fact that you will likely start multiple colonies only to have them fail before you ever build your first moderately sustainable community, then there are a lot of things you will like about RimWorld.

It’s a game that runs easily on nearly any hardware, and it’s one that I keep it on my travel laptop for when I go out of town on business.  RimWorld is also a very dynamic game similar to others like Minecraft, Starbound, and Civilizations in that the basic list of rules combine with dynamically generated worlds to create endless playthrough potential.

The best part about RimWorld isn’t even what I can tell you about it right now, though.  What I like best about this game is the developer.  Persistent updates from one of the smallest development teams in the industry that constantly move the game forward, making it more complex, more interesting, and more enjoyable without negatively impacting the work they’d done before.

I appreciate an exceptional game, but I even more appreciate a team that consistently performs above any and all standards to quietly and without fanfare build one of the best games of the last decade, if not longer.  In all fairness, not everyone will like it.  Those that do will love it, though.  If there was any doubt, you can rest assured that I’m in the latter category.