It is official Riders Republic has launched, and Riders Ridge is full of racers, tricksters, and even a few dragons and unicorns. Even though I enjoyed my time during the beta, and wrote up a comprehensive preview, I was looking forward to jumping back in to further my career, see what’s changed, and of course, explore the vast iconic landscapes. With a full review barreling down the mountain, this prelude will detail what I’ve liked so far, and what has been a nuisance.

The thought of an Extreme Sports MMO is tantalizing to say the least. The world of extreme sports is vast, and exciting, especially when you throw in the jaw-dropping landscapes that many of these activities require in order to shred appropriately. Currently, I have dozens of hours under my belt with Riders Republic, and while I could probably pen a final review score based on what I’ve done, it still feels like I’ve barely scratched the surface of what’s available. 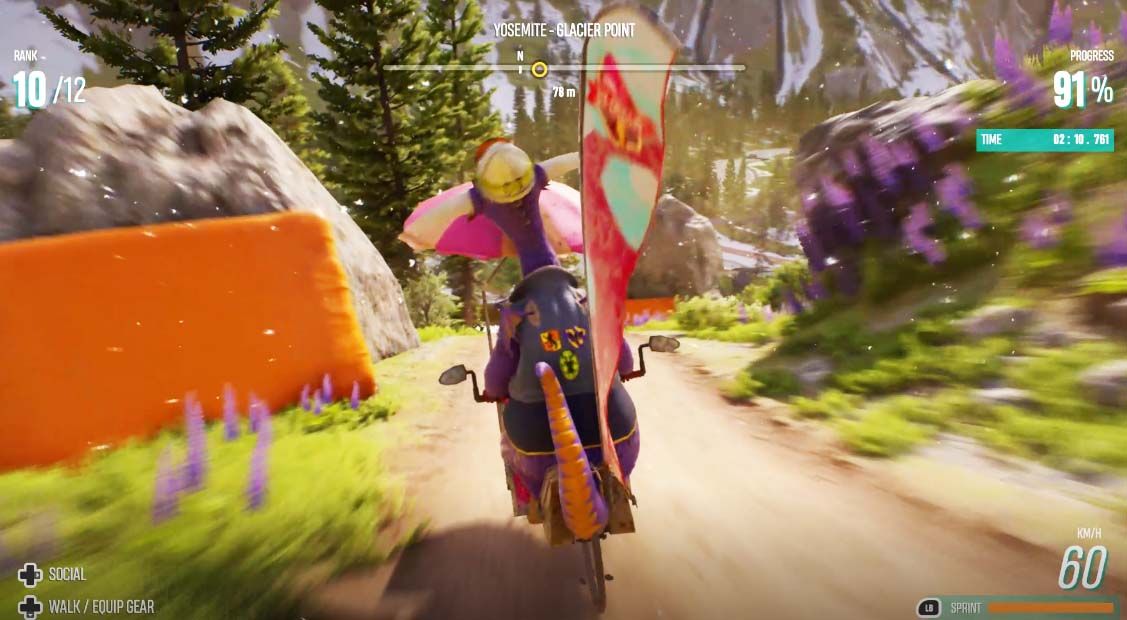 I’ve predominantly spent my time with the biking aspects of the game, which should be no surprise if you read my preview from the Beta in August. So far, I’ve managed to stay pretty evenly in my career progression between racing and trick battles. I’ve mixed in other forms of extreme sports, and in some cases, you really have no choice but to swap sports, all within the same race. Here is a break down of the good and bad of what I’ve encountered so far.

The World: During Beta, I played Riders Republic on my Xbox Series X, which looked fantastic, and played as good as it looked. This time, I decided to take may chances with the PC version, and with all maxed out settings, the game has never looked better. It’s more than just the majesty of the breathtaking landscapes the game emulates. Weather effects and man-made obstacles add an appealing ambience to the terrain. These environmental factors don’t just make the game look extraordinary, but they change your play experience even if the track itself is largely the same.

Trick Handling: In the beta I wasn’t the biggest fan of trick battles. Pulling off a cohesive string of tricks to rack up huge numbers requires practice, but the trick assist presets will get you most of the way there. Trick assist comes in 3 modes, Auto-Assist, Manual and Steep Mode. For trick masters who want the most control with the ability to earn the most points, you’ll want to play on Manual Mode. For the rest of us, looking for some easy enjoyment and even easier solo competitions, Auto Mode or Steep Mode closes the gap and lets you do tricks without perfect positioning every time. Steep Mode is similar to Auto, except that if you release your trick at any point, the game will attempt to auto-correct and help you land, giving you the best of Auto Mode with the insane trick potential of Manual. In both modes it’s still possible to faceplant regularly, but far less than if you were a “super pro” Manual Mode user. 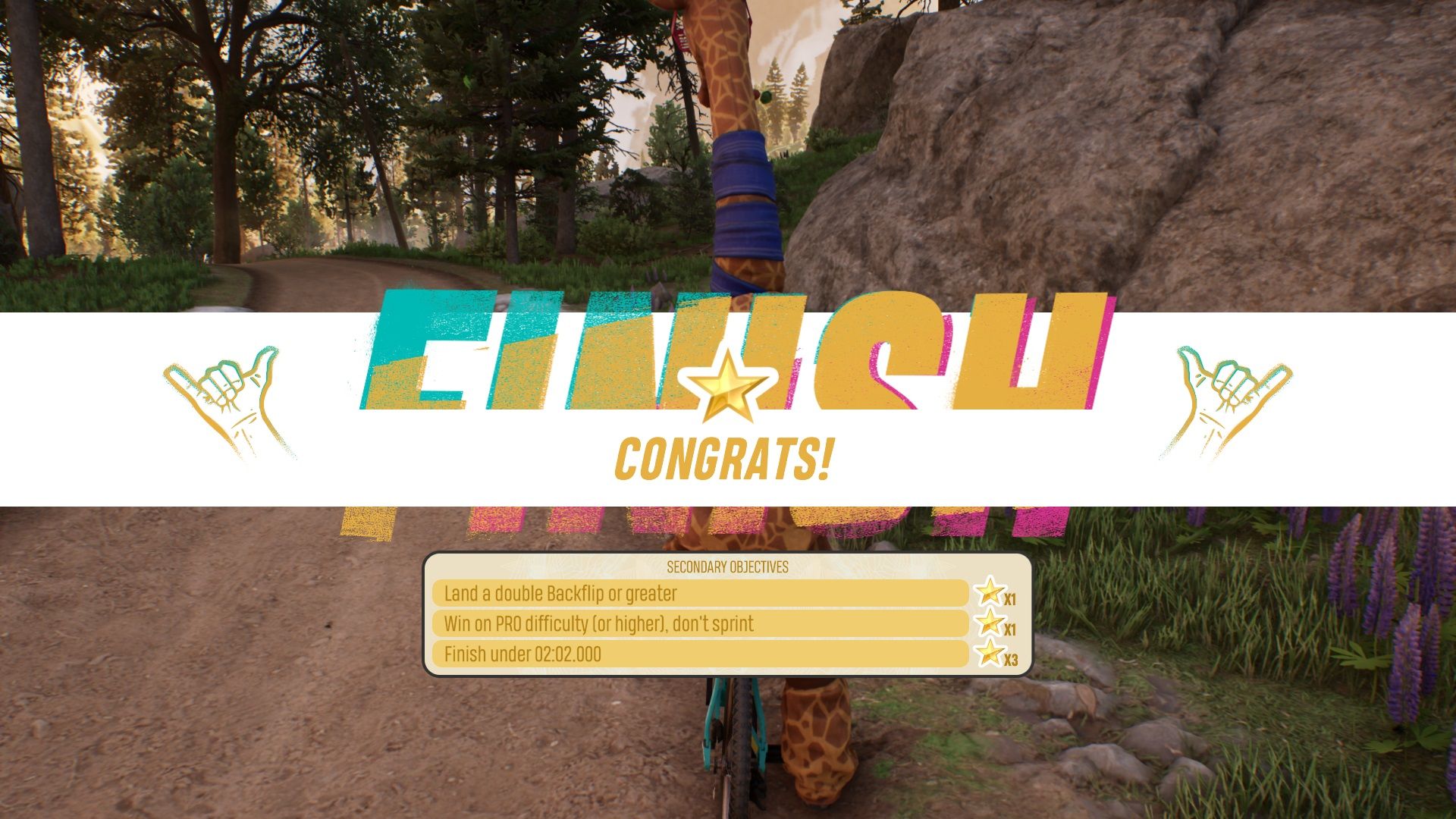 Star Power: Races, trick battles, and mass events provide challenges that can earn you stars. Your star rank will unlock new races and battles as well as some cosmetics. Pretty much, most of what you’ll do in game, is compete for stars, or earn them by finding collectibles in the open world and through various open world trials. The easiest way to pick up stars is to compete in the various races, while completing challenging objectives. Some of these objectives might be “Land a trick of 5000 or more without rewinding”, or “Win this race without using the brake”. What is great about these challenges are you don’t have to complete them all at one time. You can focus on each of the challenges separately, and run the event multiple times. That also means, if you can’t earn a star because your equipment isn’t up to snuff, you can always come back later when you’ve earned better equipment.

Watch Out for Bugs: Of course, just about every game in existence has bugs, and Riders Republic is no exception. I’ve run into quite a few annoying ones throughout my biking career. Some of them are minor annoyances, like the time I quit out of a race and it launched me a good mile or so into the air in the middle of nowhere on my mountain bike. Others, are far more annoying. In one case, I couldn’t press start or select to get to the menus on my controller or keyboard, which meant I had to quit out of the game through task manager. On more than one occasion I’ve been stuck in the race completion menu, which also required I quit out of the game to progress. These issues seem to happen rarely, but when they do happen, it can be frustrating.

Can’t Win’em All: Most of the races have an option to play solo, despite player-bots joining you during the event. Sometimes it’s helpful having these bots that mimic what other racers have done previously. If you follow the leader of the pack, you can learn each race, and maybe even a trick or two along the way. Other times, these player-bots can knock you off course and send you flying out of the way of your objective.

Some races are very difficult, and you could be in for a surprise when you find that the challenges designed for the event are for racers far better equipped than yourself. In some cases, it’s difficult to determine whether you’re losing a race because you’re just bad at the race, or because the AI players have better equipment. I’ve learned that the latter happens far more than I’d like to admit, which means I’m probably running races on difficulty levels far above where I should. More information should be provided on the experience and equipment levels of the races on particular difficulties so that players don’t feel disheartened when they get blown away on a straightaway by nearly half of their AI opponents. 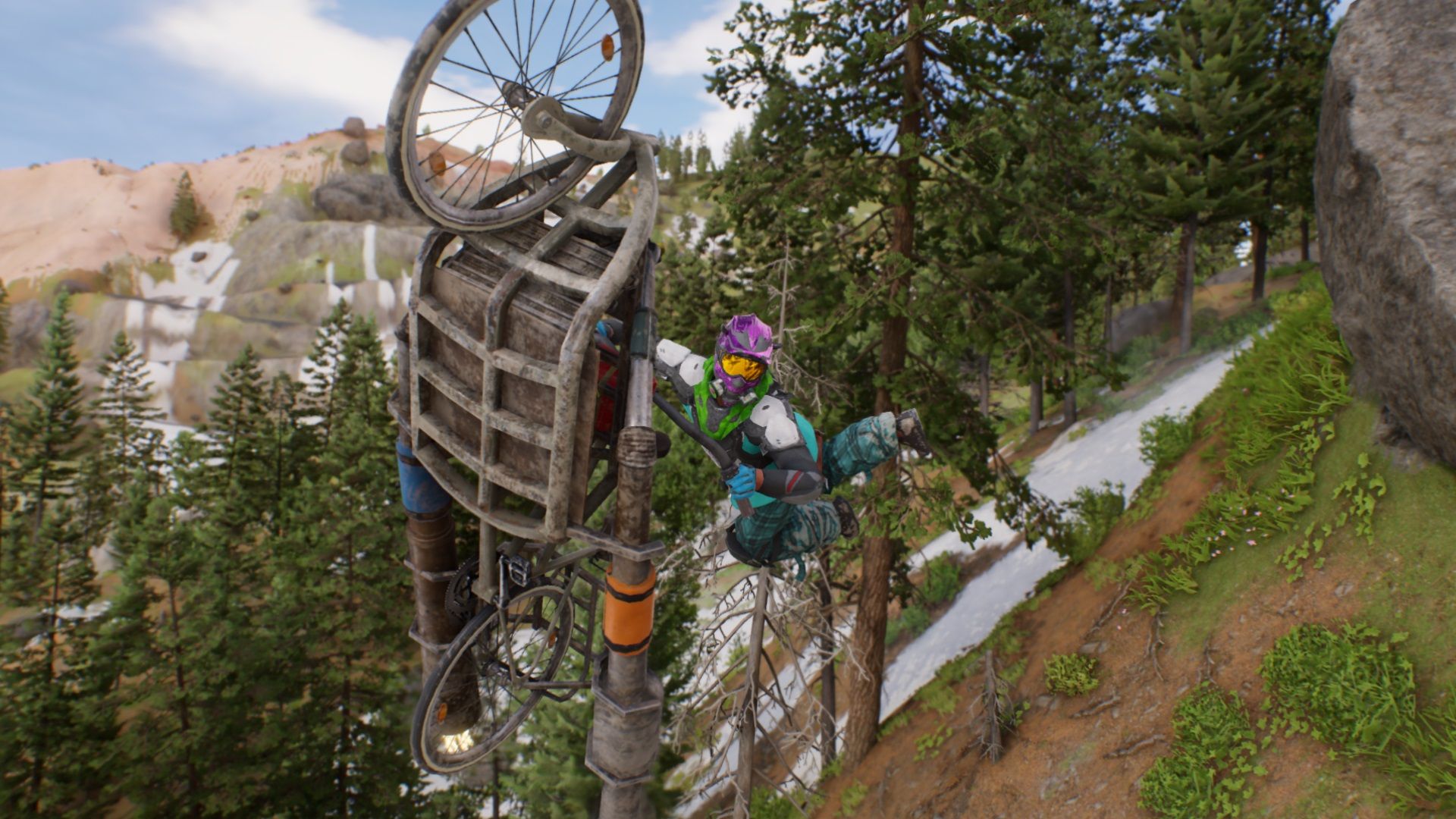 Fast Travel Isn’t That Fast: It’s great that you can jump into the map and select a race you want to go to, and in an instant you’ve teleported there. Well, not there exactly. In some cases, the teleporter still takes you about a thousand meters off from where you need to be. Several times I’d teleport to the top of a mountain, only to find that I have to navigate several hundred meters still, through difficult terrain that, more times than not, leads to me somersaulting headfirst in the opposite direction of where I should go. The added travel time and forced exploration in these instances is not particularly enjoyable, especially if all I want to do is bounce from event to event, without as much as a cutscene impeding my path. Sure, they do provide rocket ski’s and a rocket bike to help speed things along, but sometimes those travel resources are more trouble than they are worth.

As I gear up for the final review next week, I’m still finding that I’m having a lot of fun in Riders Republic. The races are challenging and the open world has a lot to do for the collector. There’s a completionist in me that can’t wait to max out my stars throughout the biking career path, but I know there are other facets of the game I’ll need to work on, most notably, my least favorite - the Wingsuit gameplay. Until then, I’ll see you in Riders Ridge.