Black Desert is somewhat of an acquired taste among MMOs. There’s so much going on, but one of the first and only true open world adventures that requires interaction with it. I’ve enjoyed my time each time I’ve played, and very much love the feeling of just grinding to my heart’s content, and putting said grind towards something. I also love interactive life skilling, and being able to progress my character, even when I’m not playing

This time around, I returned right at the beginning of the Drakania Awakening Season. With Drakania now having both of her specs, along with my roster needing a nice little touch-up in terms of gear, I dove right in and got what I needed in a couple of days in the season.

Right off the bat, I noticed the quality of life improvements across the board. The revised descriptions that better entail what even the most obscure items are used for is such a good improvement. Seeing a more detailed layout of your stats on a single window is also a very helpful touch, and saves me a ton of time between Garmoth.com and the in game window.

Another great addition is the Tool Bag! 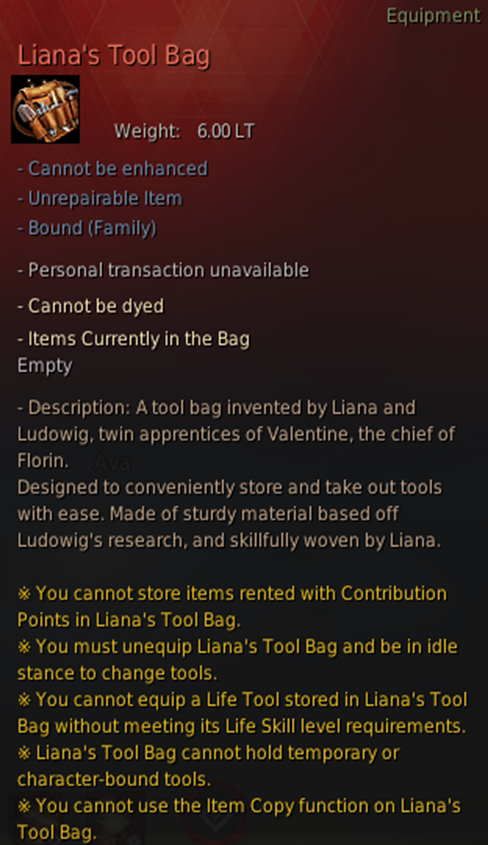 This may not seem like a big deal, but it’s such a great quality of life improvement when it comes to actually having your tools in 1 spot. No longer will I have to scramble to find the right pickaxe or hunting rifle for the life skill I want to do. It’s all right here in this neat little bag for my entire family to use.

The good changes don’t stop there. The grind spots overall have gotten such a big buff all over the world. I last played when Sulfur Mines was all the rage. Now, pretty much anywhere reasonable will get you so much silver per hour, that you really can’t go wrong with whatever you’re comfortable with. Yes, there are certainly spots that I wish got just a tad more love, like Biraghi Den, but overall, you’re pretty spoiled with grind spots. Pollys are still great for skill exp, while Gyfins is the new hotness when it comes to exp. Calpheon Elvia is looking very good for the super high end, with both Hexe Sanctuary and Quint Hill looking incredibly good for silver per hour. There’s a spot for all gear levels coming right out of season, and it’s really nice to be able to just switch it up, instead of just staying in a single spot for longer than I’d like, especially with how smooth gear progression is now.

Speaking of gear progression, the addition of Godr-Ayed weapons is a massive godsend.

For those unfamiliar, Godr-Ayed weapons are the interim between TET and PEN Blackstar, with incremental increases between 0 and PEN within itself, and a PEN Godr-Ayed being the equivelant of a PEN Blackstar. For those who already have a PEN Blackstar, this doesn’t mean much for them, as they already have a Best in Slot. For those working towards that, however, this is absolutely huge. You no longer have to suffer forever as you progress, and can now get minor, but meaningful upgrades as you go. When you’re at the point where you’re working on a PEN Blackstar, every upgrade matters so much, but is so expensive. The fact that you can still make gains at a reasonable pace in between is yet another sign that Pearl Abyss understands how they want gear progression to look. I’m very much looking forward to hopefully getting my own in the near future.

I’ll just get straight to the point here. The end of Season reward is another 100 stack…

When there are so many events and giveaways of failstacks, including 100 stacks, and even one of the season token rewards being a 140 stack, having a second 100 stack in a row feels very…blah. I know that all the accessories are there, and combined with the guaranteed PEN accessory via Jetina, it’s hard to do much better than that on the accessory side. That said, I don’t see a reason why life skill gear can’t be a part of the rewards. I know that I would love to be able to put a really nice Manos set together, and going through a season for a TRI Manos piece would really help me jump start that venture. If not life skill gear, then why not a means to boost your path to a guaranteed PEN armor? If I’m not exactly new to Black Desert, but I can’t quite use the accessories, a nice bump in getting my reform level to 4 would make me want to progress even more.

While a lot of the grind spots received some incredible buffs, life skills, on the other hand, could use a lot of love. Grinding always had the edge when it came to silver gains, but life skills weren’t terrible. There was little investment to get going, and there was tangible progress when you hit milestones, like Professional and Master. Nowadays, there doesn’t feel like there’s that much going on once you are at those ranks. Alchemy got a very nice bump with the ability to identify Lightstones without needing to spend 20 or so mil silver for each one, but that takes a lot of investment to get to Guru rank. Even so, I think if there were more going on at the higher ranks, it would give more incentive to do them, aside from grinding always being the better use of your time.

The biggest ugly spot in this update series is Drakania’s Awakening as a whole. When I jammed it through the season, I was stunned by how visually pleasing it was. Moving with it felt good, and there was a lot of depth in its kit, while also retaining its fun factor. The problem with her Awakening spec is her damage, and her squishiness.

Generally, when I look to play a character in Black Desert PVE, it needs to be at least two out of four things: fun, have damage, have sustain (e.g. life drain, tankiness, or otherwise some form of durability), and feel worth it. Drakania is only one of those things, and that’s fun, but for me, eventually the fun wears off when you simply aren’t pulling your weight.

I don’t mind complexity at all, in fact, complexity, when properly designed (which it is), adds to the fun. When I feel like I’m working significantly harder than other classes for noticeably less gain, however, is when the fun factor starts tapering off. I don’t need whatever I play to be the best, not in the least bit. What I do need is a tangible payoff, and Awakening Drakania is not that right now. Her ~20% damage nerf before release didn’t make very much sense to me, and the impending 10% damage buff she’s getting in Global Labs is not enough for me. I hope she gets some more love in the future, as she’s one of the classes I’d be more than happy to tag in the future.

If you want to just turn your brain off and grind the night away, Black Desert is one of the best MMOs out there. It’s getting easier and easier to get to the end game, especially with how many ways there are to get guaranteed PEN gear. It’s feeling less and less like it has to be my main game, and more and more like I can just get on and play while there are dry spells in other games. Even if I do main Black Desert, there’s a lot to do outside of grinding that can help towards progress as well. I’ll be playing this far more than I was before!