A certain trademarked cartoon became popular when I was a young adult in college, and even though a lot of my friends were avid fans, I just never had the opportunity to develop a taste for what would eventually become one of the highest grossing intellectual properties owned by Nintendo.  Now, Nintendo is also known to be more than a little litigious, so we’ll just avoid dropping that particular copyrighted nuclear device on my favorite website.   If I do slip and say anything that remotely sounds like “poke,” let’s just assume I’m talking about the delicious treat commonly found in Hawaii.

My adventure with the cute creatures of Temtem actually started with Roblox.  My niece had been playing and apparently there was a community-developed game mode that was derived from the unmentionable IP.  From what my niece says, it’s been around before and was shut down due to copyright issues.  The old code was repurposed into this newest iteration, which as of a week ago was also suddenly shut down after a flurry of cease and desist letters were dispatched.

Looking for a new game for her to play, and preferably one that came without legal entanglements, I remembered Temtem.  Now, I’d seen this game before and had watched a couple streamers playing it a few months ago, but I never really felt drawn to it.  After all, the concept hadn’t captured my interest in college, and I didn’t really pay it much attention now.  With my niece in need of new entertainment, I bit the bullet and decided to give the game a try.

If you’re like me and have never been a fan of, as the kids say, “catching ‘em all,” then you may be on the fence about this game too.   It’s gotten very good reviews and seems to have a strong fanbase, so there is clearly something here to consider.  Today, I’m going to take you through some of my own experiences with the game and talk about some of what I did and didn’t like about Temtem.  Whether or not what you find makes you interested in playing will be up to you to decide, though. 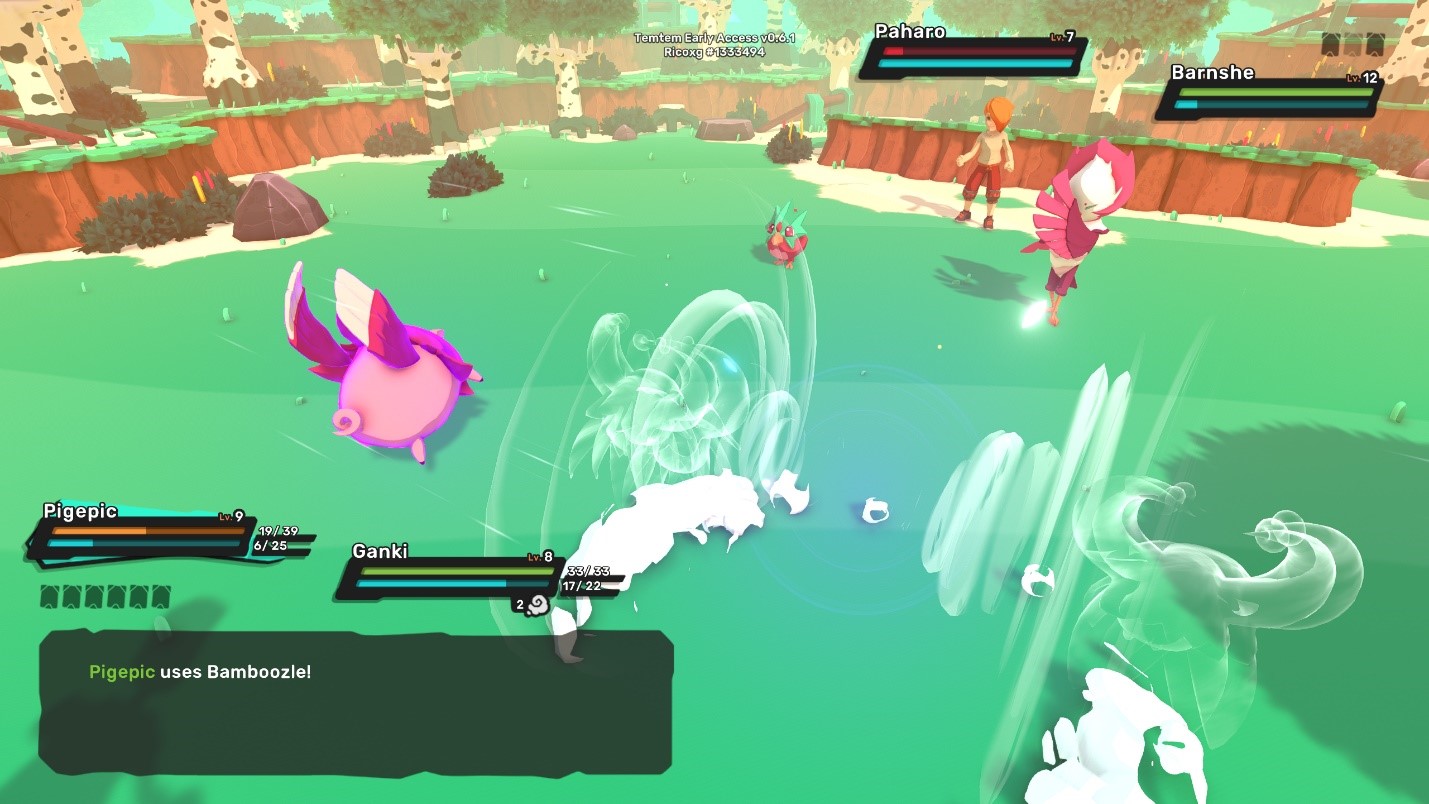 One thing I can say off the bat about the game is that it’s cute and relatively simplistic in general art design.  The graphics are straight forward and no frills, but the color palette is vibrant and thematic in each region.  Aesthetically, I don’t know that it’s precisely my cup of tea, though.

On one hand, I have seen this general art style used in a lot of games and I do have a huge appreciation for the value of simplicity.  I’ve even liked this sort of minimalist cell-shaded style in other games.  The problem with Temtem, and some of the other games in similar vein, is that the style in this game is pretty clearly geared for a much younger audience.  If I were in my teens or pre-teens, I think I’d really like the game’s design a lot.  As an adult, it comes off feeling to my eye, a bit more childish than nostalgic.  Though it’s certainly a style that many would see as “cute,” and I’m sure there are more than enough folks who’d really appreciate it a great deal.

One thing I did really appreciate graphically about the game was the UI design.  This is another great example of minimalism done very well.  I found the menus very easy to navigate and never had trouble finding the information I needed.  All the contextual information was perfectly formatted for optimal digestion and comprehension.  Just a fantastic example of interface design done exceptionally well.

Upon actually getting into the game, I was faced with more of what I really didn’t want, though.  The whole setup is a bunch of kids going to school to be Temtem trainers and that whole setting just didn’t appeal to me.  Maybe it’s because I was a nerd back before being a nerd was fashionable, but I just don’t really have any desire to experience another day in the life of kids in school.  It’s probably an emotional reaction, but I just really hated a lot of the storyline because I was so disinterested in that particular element of the narrative. 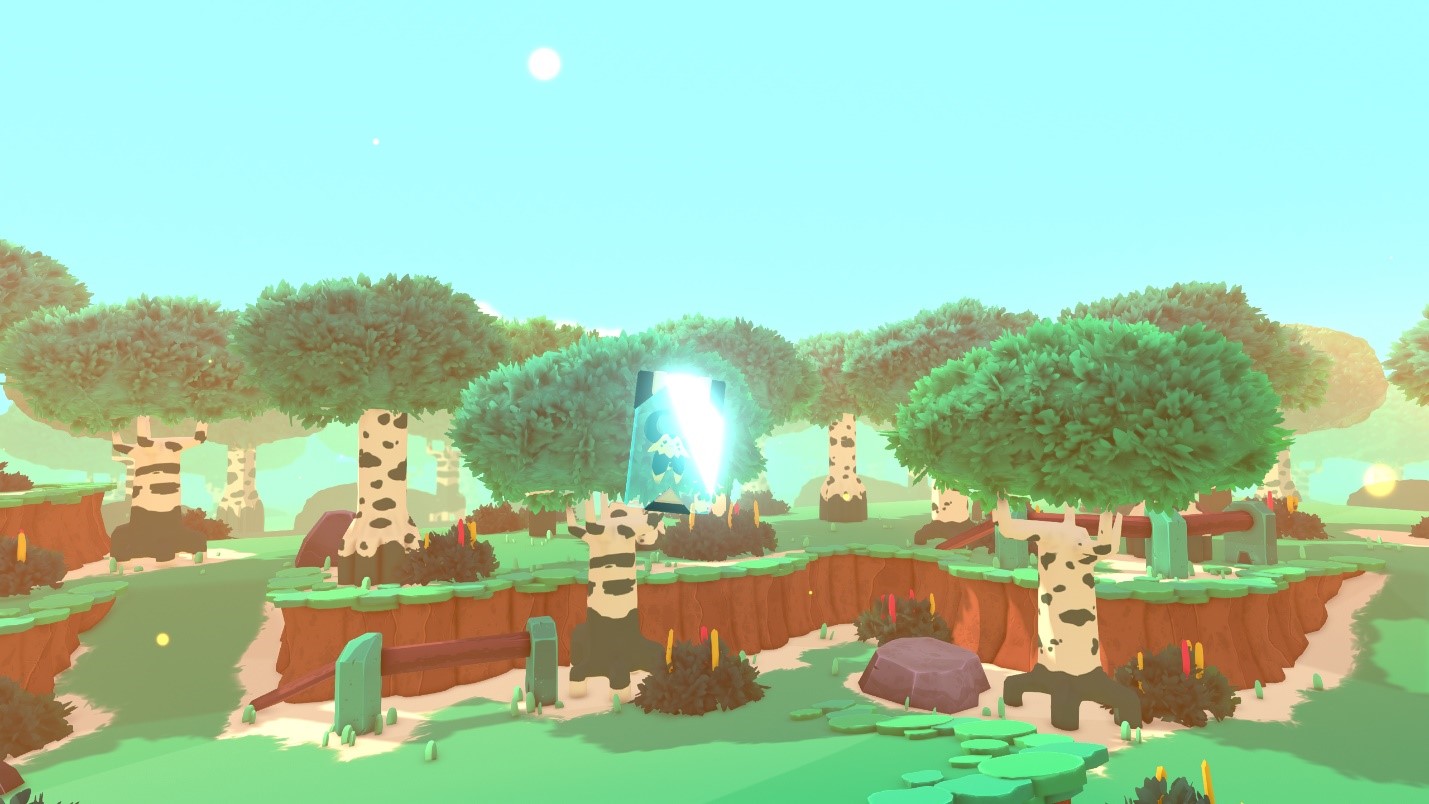 Throwing cards rather than multi-colored balls is the delivery medium of choice, but if we’re honest, the concept is still pretty much the same.

That really did make it a little harder to appreciate the game for what it is.  Between the child-like design (which really does capture the whimsical sense of childlike joy that comes from existing in a world that has yet to grow beyond that early simplistic view of life) and the story putting you into the shoes of a kid, it was just too immersion breaking for me to really steep myself in the essence of Temtem training.

That said, I really think that a lot of kids will absolutely love it.  While this was not something that appealed to me personally, I could easily young adults and older kids being immediately sucked into a narrative that speaks directly to them.  Because it’s also a good clean story with no inappropriate material that I’ve noted so far, I think it’s also an easy one for parents to give a thumbs up on purchasing.

The game is also easy to play, which I think also lends itself well to younger gamers.  For many of us, this could very easily be the game that created a new gamer in the family.  That’s definitely something I’m always glad to invest in.

Beyond my early frustrations with the narrative and setting of the game, there was still a lot here that I did find far more interesting.  I think adults may also find a lot of redeeming value in Temtem, and not just the kiddos.  With twelve different temtem types and several dual-type Temtem in the game, there’s a level of complexity around Temtem that goes well beyond the younger crowd. 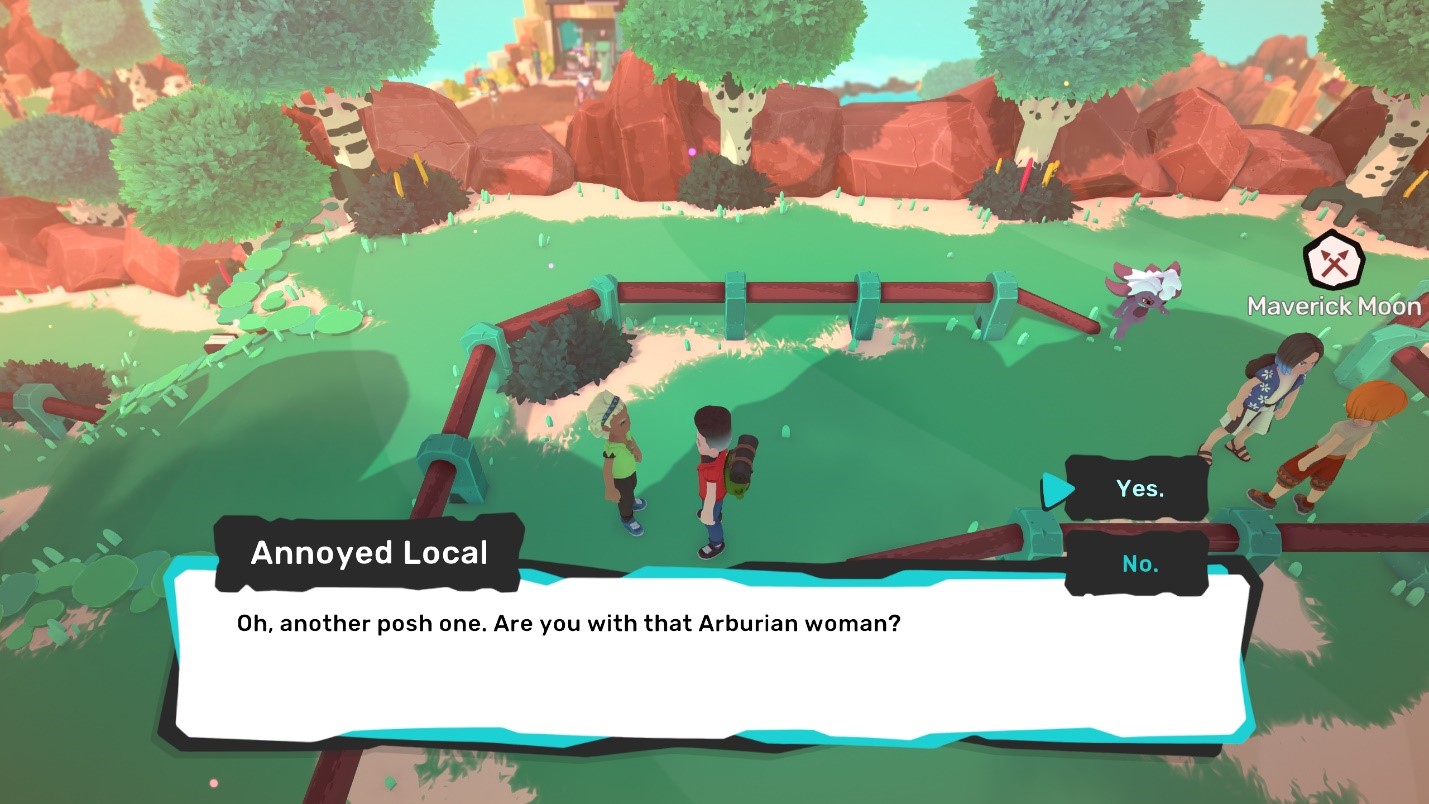 As deep as the combat system and collecting game actually is, I had a lot of trouble being interested in a character that’s just a kid.

This creates a fantastic scenario of perfect imbalance where there is no ideal play in any given scenario.  Types are further complicated by imbalances between individual Temtems having different stats and even different skills.  From there, what Temtem are paired with each other starts impacting other abilities, and the complexity just increases the deeper you go.

I found myself fascinated by the deliciously diverse ecology and all the complex interactions between sets of data.  There is a myriad of opinions on the best way to play and best types, but the fact that they all have to include that “it depends” caveat is a clear clue that no answer is absolute.  That leaves room for innovation and innovation is where I have fun.

If I had to say that where most adults would find satisfaction in the game, it’ll most definitely be in the details.   Whether it’s running their own character or in min/maxing their kid’s character after bed time, there is a lot of room in Temtem for more serious gameplay.  With new ranked matches in the game, the opportunity to be competitive will be a much more effective draw for adults.

I’m not saying I’m interested in ranked for the opportunity to woop up on some little kids, but I do think losing and doing it well is a valuable lesson to learn when you’re young.   It’s my responsibility as an adult to nurture children through their emotional and intellectual growth, right? 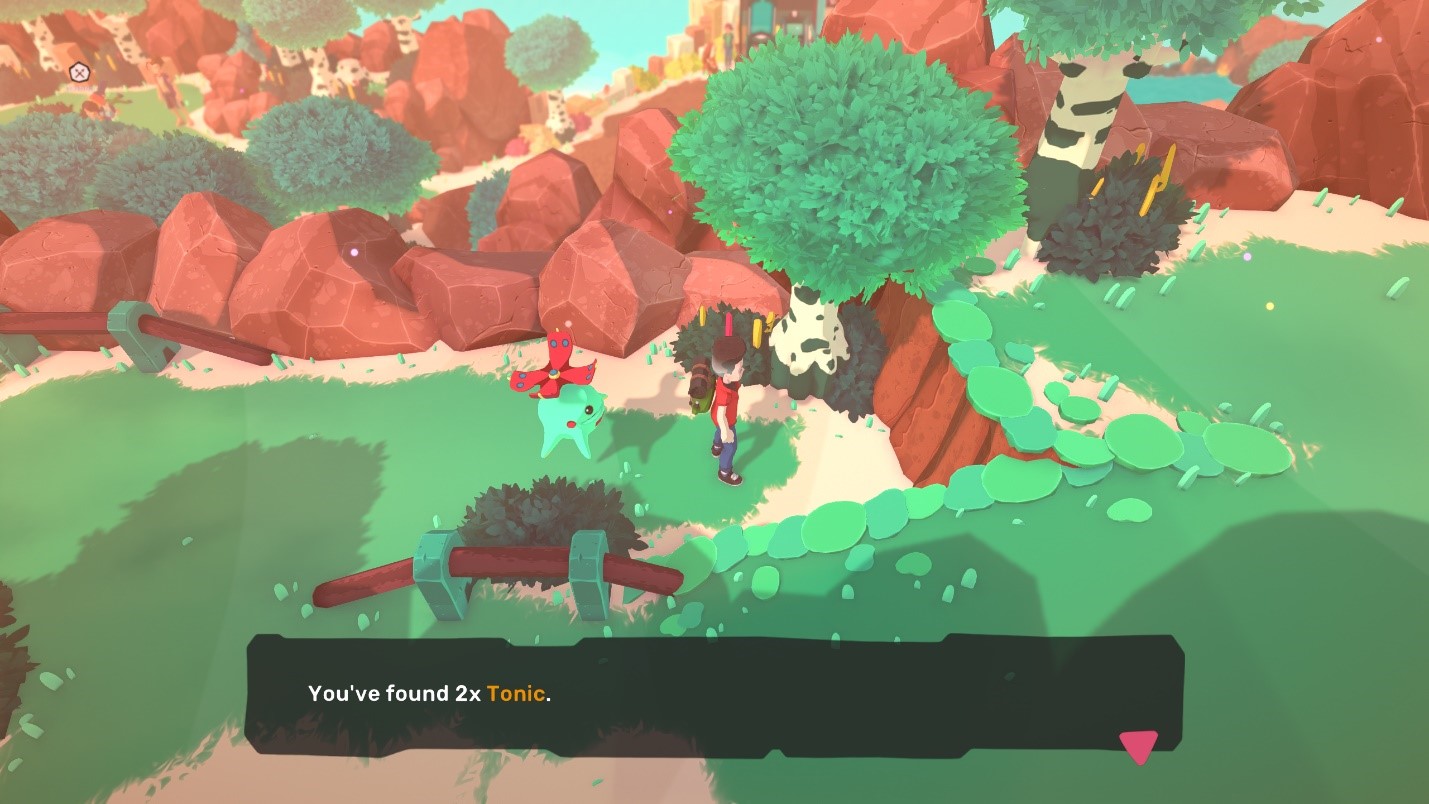 Aesthetically pleasing, each region boats a moderately distinctive ecology.  Different temtem in each geographically distinct region makes for a relatively open world once you get past the initial story.

In the end, Temtem is a bit more of a mixed bag than normal.  If we had any other option than to play a kid, I think that I’d be more interested in the game, but that’s such a sore spot for me that it’s hard to get past.   It really shouldn’t be and it probably won’t be for many folks, but for me it was an issue.  I just really didn’t like running around with a prepubescent avatar.

I think this is easily a game that I’d pick up for younger kids, especially if they happen to like Pokémon, er I mean little monster things…  Clearly there’s been some sort of legal delineation created here and they won’t run the same risk playing Temtem that they would playing other less appropriately named critter catching games that encroach too heavily on a certain IP.  I think the game is easy enough to play and visually interesting enough that kids in a wide range of ages are likely to really enjoy playing, too.  I have no qualms at all about recommending Temtem for younger gamers, and I can see it being a really great game for introducing kids to online gaming.

For adults, it’s a bit more questionable.  There are definitely some fantastic points in favor of the game.  It’s a little grindy, so it’s a great game to play in the background while you work on other stuff.  Temtem also boasts an incredible amount of complexity and a sizable zoological catalog.  I could also see adults my age that were more into the other IP finding a lot of joy experiencing a similar concept but with names, abilities, and types they haven’t memorized yet.  It’s an opportunity to experience that same sense of discovery again, and I think that’s something a lot of people will really enjoy.

The best audience is probably a combination of the two.   I see Temtem being a game that kids and parents can experience together, each making meaningful contributions, and each finding their own reasons to enjoy the game.  That opportunity makes me want to like the game so much, and yet I just don’t.

This is one of those rare times where I can appreciate so much about a game, but it’s just not really hitting for me.  Temtem does so much right, and even if they were to allow me to create an adult character, so much of the game is geared towards that childlike experience of the world, that I just don’t know that I would be able to enjoy the game.

I’ll probably still play the game with the kids, because I have a nephew and a couple nieces that I think will completely dig this game.  Obviously, Uncle Red has to share in that experience, and I’m always glad to do so.  I even enjoy it when it’s a game I otherwise wouldn’t spend much time playing.

I’m interested in the readers, though.  Have you all played this game or have your kids?  I’d be fascinated in your own thoughts about the experience and whether or not you’re still playing.  Let me know down below, and also let me know what Temtem combinations you’ve found to be most effective.

Until next time, “Temtem up!”