Last week, Mount & Blade II: Bannerlord was officially released for Steam and Console. Technically, Mount & Blade II has been available on early access through Steam since 2020, but this is the first time it can be played on PlayStation 4, PlayStation 5, Xbox One, and Xbox Series X/S.

Initially, Bannerlord was not developed with full controller support in mind, but in order to meet the needs of the console this had to be remedied. While not perfect, TaleWorlds Entertainment managed to find a couple of interesting way to circumvent the keyboard. However, just because everything from menus to combat can be managed with just a controller doesn’t necessarily mean it’s the best way to play the game.

During the last week, I spent quite a bit of time with Mount & Blade II on the PlayStation 5. As someone who put hundreds of hours into Mount & Blade on PC, I did not enjoy the controller configuration nearly as much as the mouse & keyboard. That being said, Bannerlord is still a fantastic war simulator, and if console is the only way you can get your fix then it can be worth the hassle for fans of the series.

My personal struggles with the PlayStation 5 version happened immediately upon starting a campaign. The first thing it had me do was adjust my lighting in multiple different ways. I couldn’t easily figure out how to confirm my lighting selection and tried to back out with the circle button (usually designated for ‘cancel’). This seemed to confirm my selection and advanced me to another menu, but after I thought I selected my faction the game sent me back to the lighting menu again.

Eventually, I figured out what was going on and realized the ingenuity of what TaleWorlds Entertainment did to make this game work on console. On PlayStation, the circle button actually turns your cursor into a mouse. Before hitting circle, you can move around selections with the d-pad, but if you tap circle then you can move your cursor unlocked across the entire screen just like a mouse.

This was likely the easiest solution to the controller problem and allowed the developers to release a console version without having to rebuild the user interface from the ground up. Although this is somewhat of a unique solution for Mount & Blade II, it’s definitely not a perfect one and creates a few issues along the way.

For the macro elements of Mount & Blade II, it’s mostly fine. Moving to towns, interacting with lords, shopping, accepting and turning in quests all works perfectly fine. Things like upgrading skills and units, equipping items, and recruiting prisoners can be a little bit annoying, especially if you forget to hit ‘confirm’ and have to do it all multiple times. 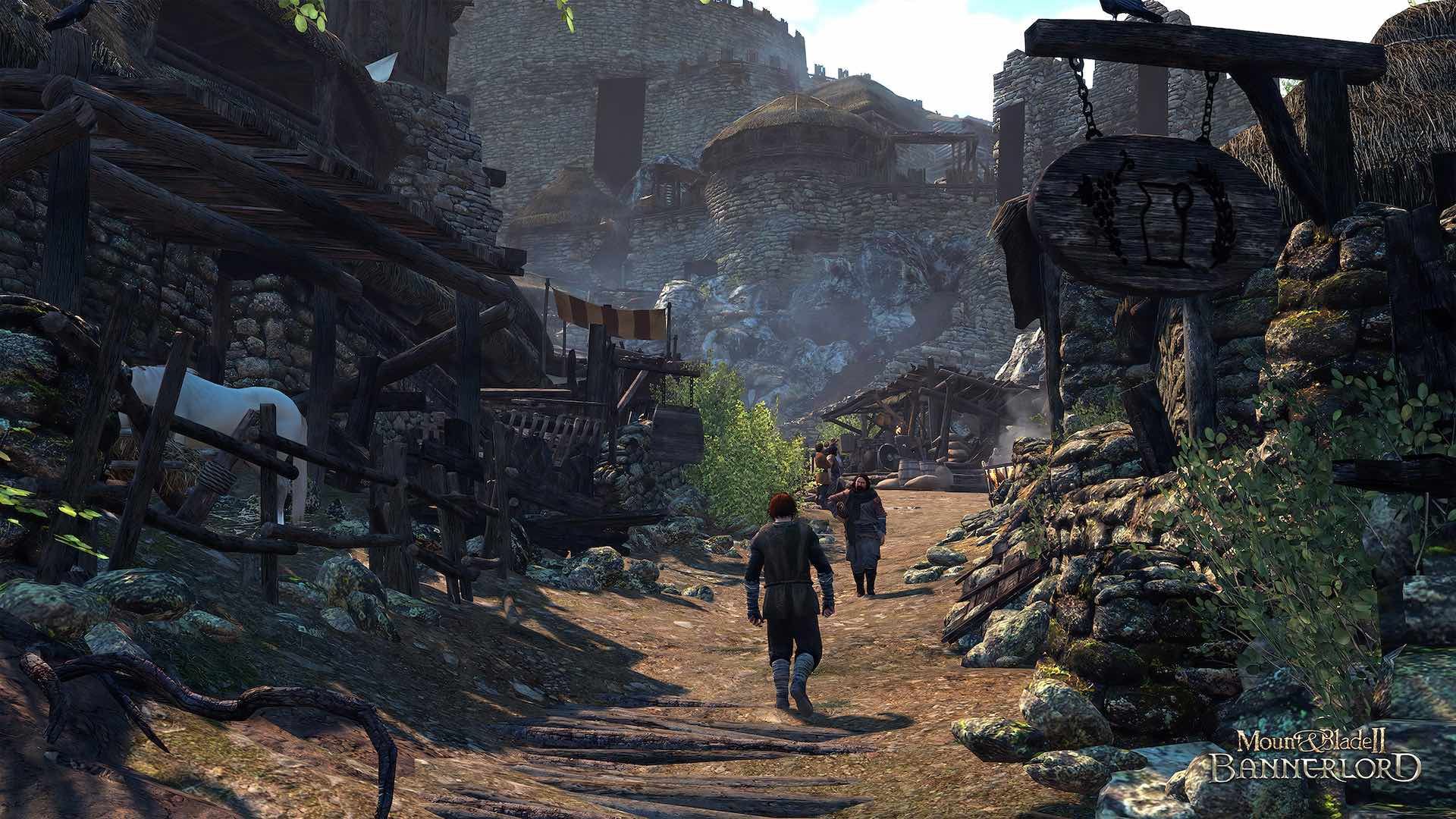 The only time this is exceptionally annoying in the overworld is when chasing down enemy units or moving over a long distance. If you change to the mouse cursor in the overworld it unlocks the view from your character, so it’s usually best to use the fixed cursor when trying to attacks raiders or an enemy army. However, in order to use fast-forward, which you’ll almost always want to do, you need to switch to the mouse cursor, scroll to the bottom of your screen and click the fast-forward button.

By the time you do this, your view is off your character and you’ll need to go find them. Most of the time this is mildly annoying, but sometimes you’ll end up fighting way more enemies than expected because they grouped up off screen and you’ll die or have to bribe your way out. In the grand scheme, there could be worse problems and I should have been doing more productive things than chasing raiders through 3 territories.

The bigger problem I found with using a controller for Mount & Blade II was during combat. On the PC version, you move your mouse in the direction you want to attack or block. Back in 2008, this was an incredibly intuitive way to handle combat and much more dynamic than other third-person fighting games. It definitely takes some getting used to but once mastered can turn you into a force to be reckoned with and makes taking down tough enemies that much more rewarding.

On the PlayStation 5, in order to direct your weapon or shield, you need to use R-stick. The R-stick also handles the camera and the direction your character faces. So, if you want to attack from the left side, your character also shifts to the left and exposes their right flank. 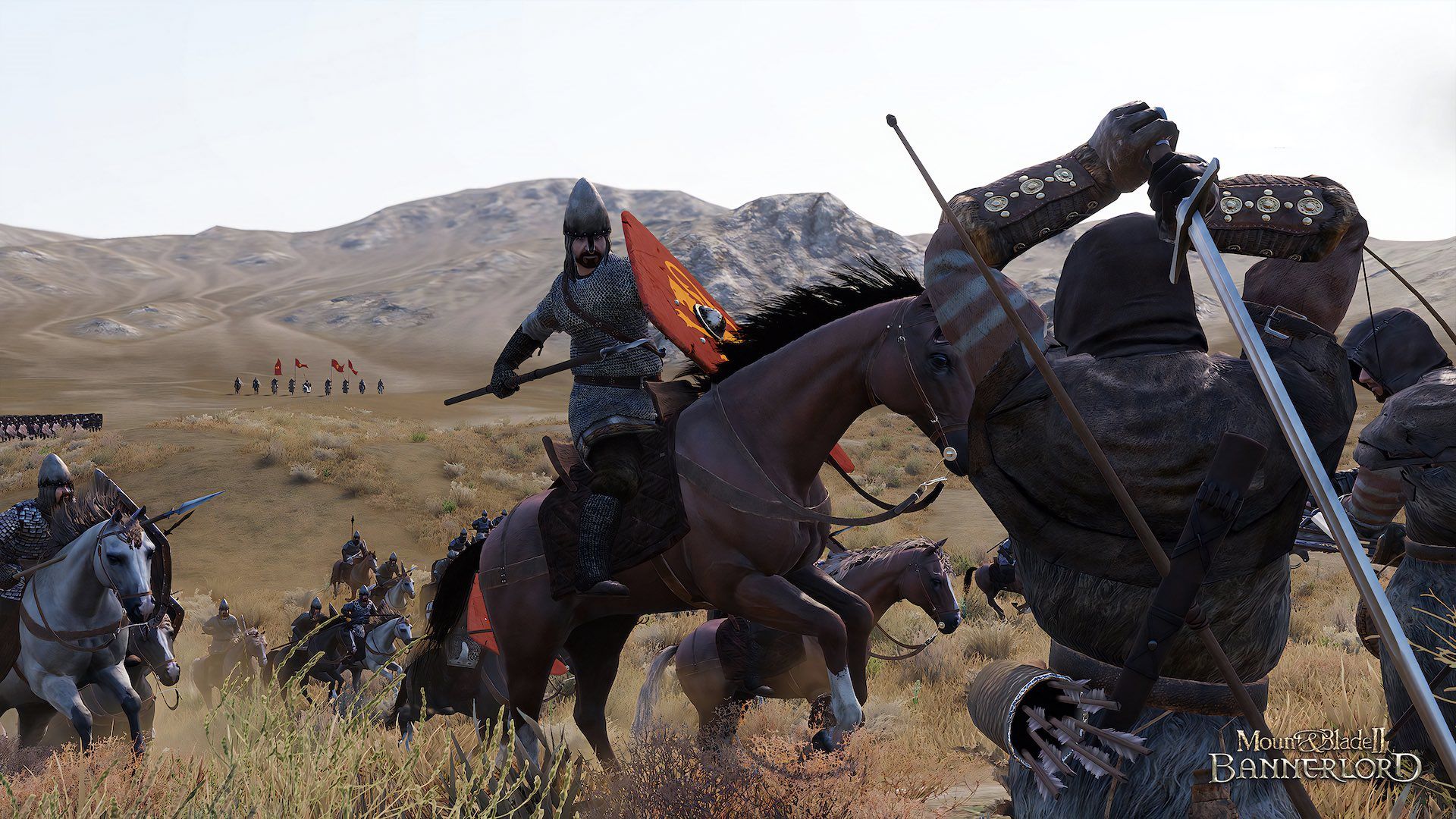 As much as I tried, I couldn’t quite get combat down on foot. I would attack the enemy’s weak side, but my movement was too slow and clunky that it left me exposed. If I tried to use the directional block and then counter, the enemy could usually attack twice before I properly counter-attacked.

Eventually, I gave up and did most of my fighting on horseback. This was a little better, but having the camera shift whenever I drew my weapon still made it difficult to land blows. Using a longer weapon, like a spear, should have made this easier but it didn’t. I tried the spear on the training course, and despite hitting many of the targets none of them broke. I assumed this was some sort of bug, but after taking a spear into real combat and only doing 1 damage, I clearly wasn’t using it correctly.

After my folly with the spear, I gave the 2-handed scythe a try. It definitely served me better, as you can prepare the swing before getting anywhere near your target. This landed me a few kills per battle but created our final problem with the controller setup.

Horses in Mount & Blade II do not turn very sharply, which is fine and more realistic than games where your mount turns on a dime. However, this means you’ll either need to take long strides between each attack or constantly press on the L-stick to circle your enemies.

The problem is actually caused by the controller keybinds, which cannot be changed at all. L3 (pressing in on the L-stick) causes your view to switch between 3rd and 1st person. So, while you’re trying to weave in-and-out of your enemy the view constantly changes between the two viewing modes. Not only does this make it nearly impossible to land attacks while mounted, but it also gave me a headache. Simply allowing key rebinds would alleviate this problem altogether.

As I mentioned previously, Mount & Blade II: Bannerlord is a fantastic medieval military simulator where you can be a merchant, mercenary, king or dozens of things in-between, despite the frustrations that come along with the console port. TaleWorlds Entertainment did what it could to provide full controller support, but it’s definitely not perfect and these are things that should be considered before buying the game on console.