It has been nearly 9 months since our review of Phantasy Star Online 2: New Genesis, and during that time, we’ve seen new classes grace the game, some quality-of-life features, and now a new region. In the latest update to PSO2:NGS, Sandstorm Requiem, the story from the Aelio region picks back up, as you head over to Retem, and request support against the growing DOLLS threat. Is Phantasy Star Online 2: New Genesis finally playing the right tune?

The desert land of Retem is a stark departure from the lush green fields and wetlands of the Aelio region. From the moment you cross the bridge into Retem, you’re met with rigid craggy rocks, Camel and Hippopotamus-like wildlife, and some dangerous new enemies. The region of Retem is pretty big, and with it comes a new story to follow, and a host of new features to help players progress. I began my journey by heading to Retem City, which felt like a smaller version of Aelio’s Central City. 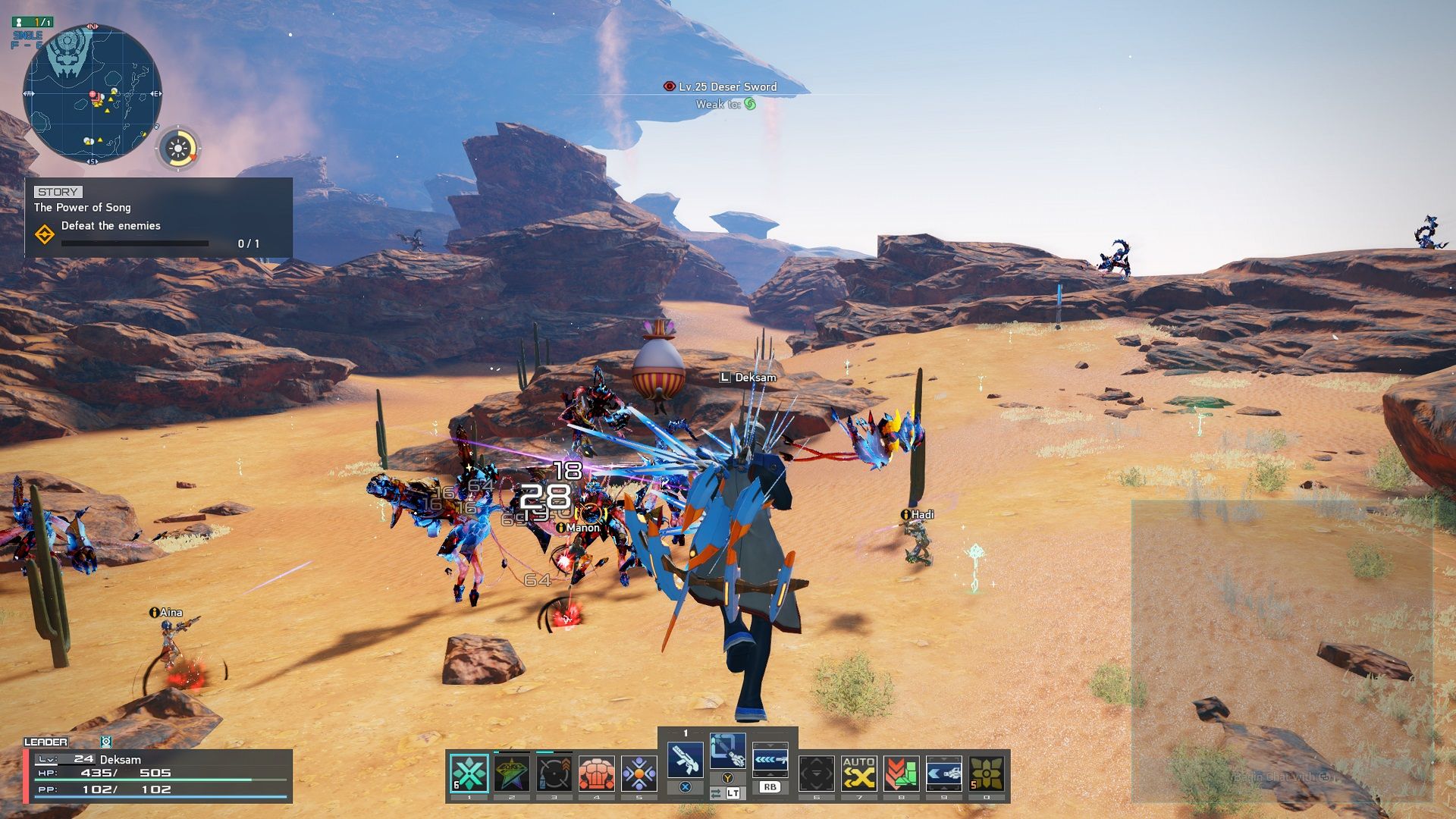 After speaking with the leader of Retem’s resistance against the DOLLS, Nadereh, you learn that Retem can’t spare any soldiers to assist Aelio. Unless, of course, Renus Retem, a giant worm-like dragon has ben dealt with. This marks the beginning of a story that weaves haughty heroics and anime style poses, with the literal power of song. Music plays a big part, not just in the story, but SEGA has added a few audible easter eggs throughout Retem for those who are interested in some classic melodies. Fortunately for you when it comes to the story, your friends Aina and Manon will join you on your journey, lest it be a mostly lonesome one as story missions are still primarily a solo affair.

For those that haven’t dropped into New Genesis in a while, two new classes have been added. The Braver was added back in August with the Bouncer joining the game in October. If neither of the new classes brought you back, the new region of Retem doesn’t drastically throw you into the deep end. SEGA takes the time to reintroduce you to each facet of the game, even going so far as to build in a series of quest chains that will remind you how to upgrade your weapons, apply augments and more. In a small way, this is a subtle acknowledgment that the team at SEGA realizes that players may have taken a break from Phantasy Star Online 2: New Genesis as they await more content. 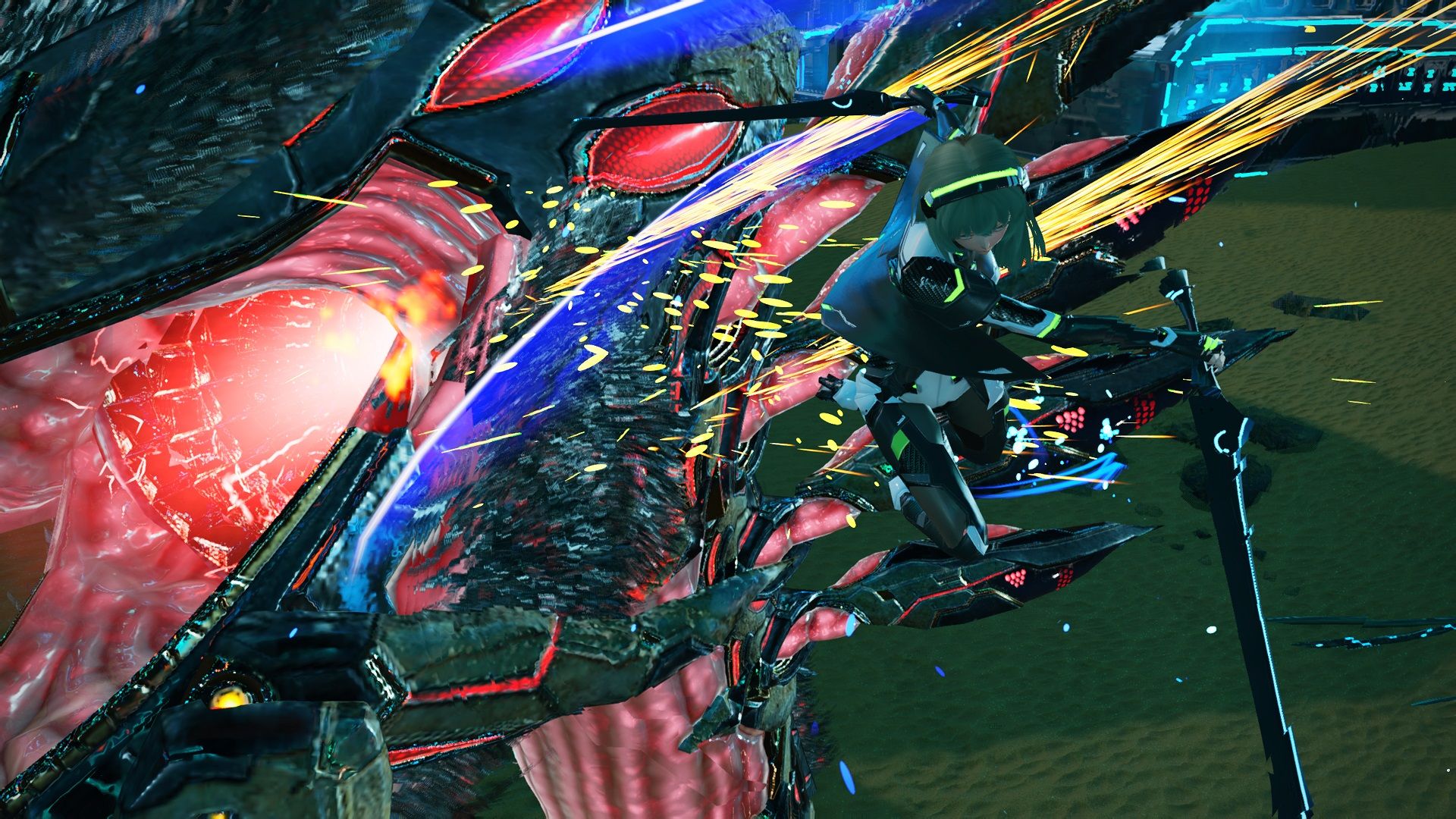 What hasn’t changed is the way in which you progress your character. Battle Power is still your primary focus. Essentially, battle power is an aggregate score that takes level, skill points, gear, and augments into consideration. One of my main gripes with PSO2:NGS was the presence of battle power-gated content. Every few story missions, suddenly you were forced to grind more levels and upgrade more gear. The pacing of the game in that regard was disappointing, and at first, I believed that SEGA hadn’t learned from what I perceived as their mistake.

In Retem, however, pacing has been quite a bit better. A slew of new side quests are available, and more unlock as you progress through the story. The experience rewards have greatly increased, which provides a solid path to gain levels, even if you haven’t quite gotten your battle power to where it needs to be. While most of the missions you’ll experience are about as inspired as any general MMORPG quest – kill some enemies here, gather some items there, SEGA managed to at least make the region of Retem interesting enough that you can complete a majority of the quests as secondary objectives while you do Trials, which are world missions that pop up every so often, and are usually done with a large group of people. 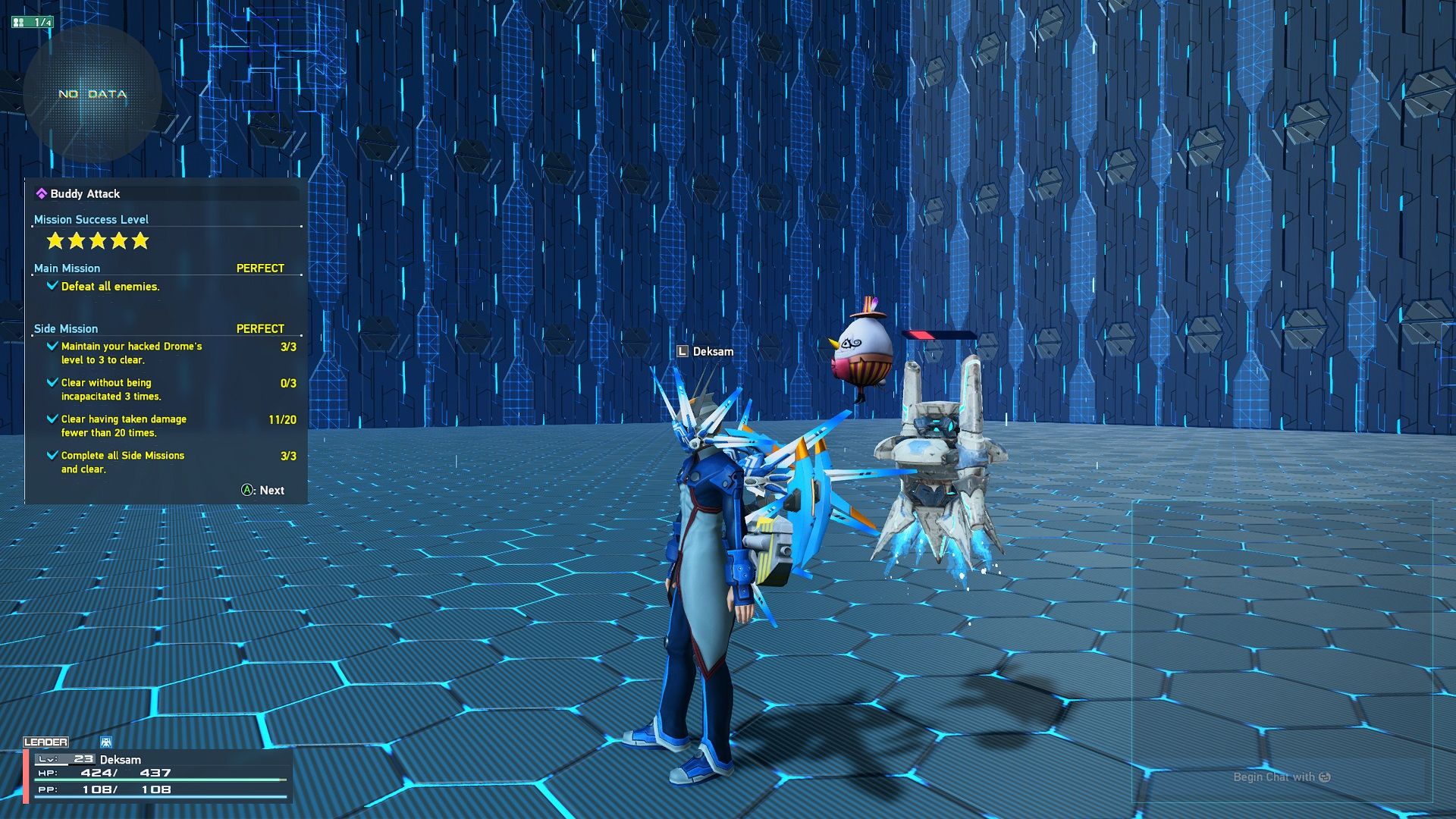 Similar to Aelio, Retem has 6 Cocoons that will grant you 1 new skill point for completing them and a tower that will grant you 5. Despite the battle power recommendation, Cocoons can be done even if you don’t quite meet those specs. There are also Battledia, which are special training areas that can be activated with special keys. World bosses known as Gigantix will also spawn throughout the world, and for appropriately leveled ARKS operatives, you’ll need to fight alongside dozens of others if you wish to succeed in defeating them. Finally, players that have reached the required battle power requirements will also be able to join in on the region’s Urgent Quests, a familiar staple of Phantasy Star Online 2 in both the original version and New Genesis.

Operatives will also be tasked with increasing their level to 35, and outfitting themselves with new 5-star gear. That means you’ll be upgrading and creating new multi-weapons, obtaining and leveling new armor, and augmenting each new piece you get, as you reach the next tier of power. Leveling your character and the battle power grind has gotten a little better, along with the inclusion of a new Mag ability that lets you set your Mag to detect specific materials that you’re looking for. This way, if you’re stumped on trying to find specific materials, your handy Mag can ping you when you’re near them. It may not be the pet-like Mag from PSO2, but it’s useful and a likely precursor to more features in the future. 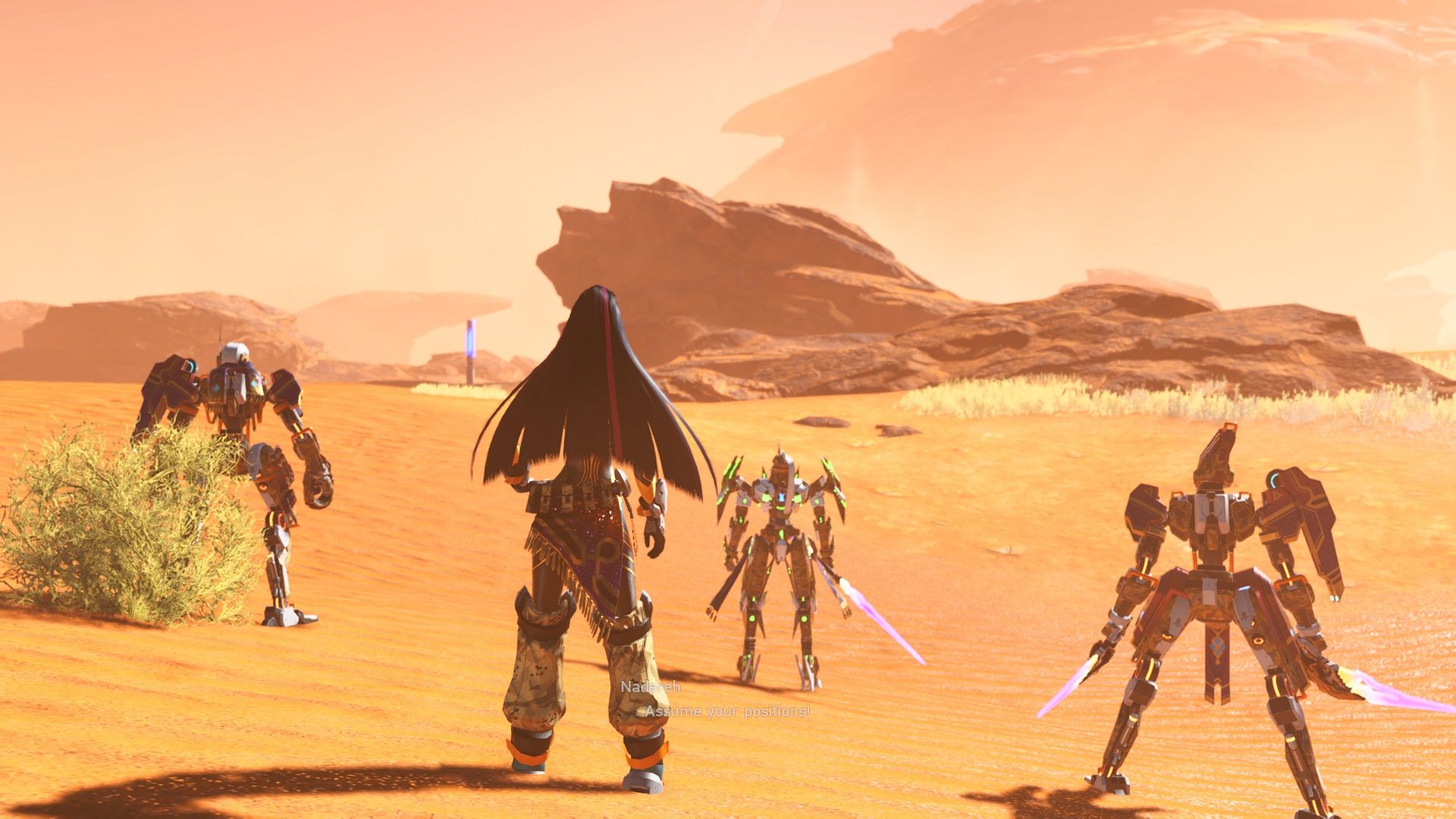 All of these activities are a step forward in New Genesis, even if they ultimately won’t go so far as to provide the extensive depth of content that will keep players from heading back to Phantasy Star Online 2’s former version after a while. Retem is phenomenal region. The verticality of the space makes it a joy to traverse, and a pleasure to explore. The surprise of finding the Maqead Lower Level on my own, and discovering the man red-boxes housed within was just one of many high points in my journey. Throughout my time playing Phantasy Star Online 2: New Genesis’ engaging new region, I’m left wanting more. If you haven't hopped into the game yet, or you're wondering if you should return, there are new classes to try, a story that doesn't take itself too seriously, and plenty of exploration that is well worth your time. Between Aelio and Retem, SEGA has provided just enough to hook players into the core of the PSO2:NGS world, and I can’t wait to see what surprises will come as the game matures.