When it was first announced, Phantasy Star Online 2: New Genesis had somewhat of a confusing pitch. NGS planned to have updated graphics, a whole new style of play, a new story, new enemies, but you could carry your character back and forth between PSO2 versions, and many of the classes and abilities were the same. Despite so many similarities between the nearly 10-year-old PSO2 and the updated New Genesis versions, the game plays, and feels, much more like a sequel than a continuation or expansion.

PSO2: NGS completed its first global closed beta test May 16th 2021, ahead of its launch in June. Fortunately for me, this wasn’t my first time testing the game, but the English translations of all of the menus and quests aided my understanding of what I easily missed in the previous test when trudging through the UI. If you haven’t played any Phantasy Star Online version before, New Genesis would definitely be the place to start. If you are a veteran of PSO2, there are a lot of features that will feel distinctly Phantasy Star, and some departures in design that you may come to love, or hate.

Phantasy Star Online has always been more action-oriented, and NGS is no different. You can choose to lock on to enemies to fire off abilities, or try the action-camera, which provides a third-person-shooter perspective. Many of the abilities have been updated with advanced visuals and effects, like charging your automatic rifle with Razing Shot as a Ranger to pierce through multiple enemies in a single powerful blast. There are many enemies that provide difficult challenges, similar to the legacy Phantasy Star Online 2, where attacking weak points is the preferred method to battle efficiently. 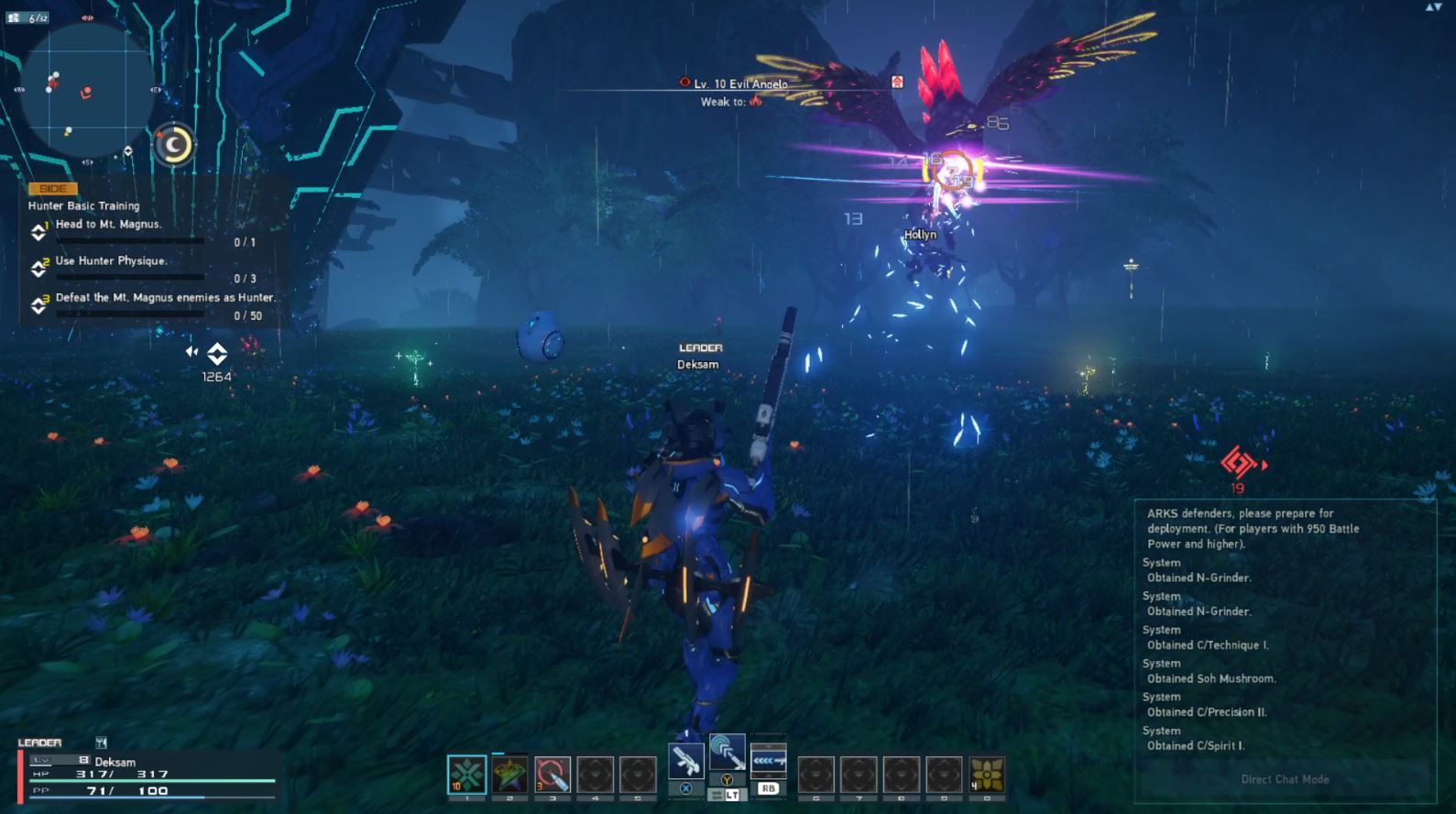 The biggest change that players new and old may find exciting while battling, has less to do with combat, and more to do with traversal. Running, using the quick dodge, gliding, and wall jumping, amps up your skirmishes, providing an overall faster pace to combat. You’ll find yourself closing distances between enemies quickly, while evading and avoiding many different attacks at once either by dodging or through strategic aerial positioning. In PSO2, players would usually find a “travel skill” to make their way between fights. “Travel Skills” are essentially combat abilities that cost energy to execute, but their high mobility makes it far easier to get around the world. These skills aren’t meant to be utilized for travel and are really meant to function as gap-closers, but their use in regular traversal has been widely accepted.

Now, traversal both in combat and out are all inherent with the movement skills in New Genesis. Sure, you could still close a few gaps with some abilities that are more transit focused, but the waste of Photon Points isn’t necessary. Other than some enjoyable new benefits to abilities and movement, fans of the series won’t find anything truly groundbreaking, but there is enough new here to keep the series fresh. This way, it's still wildly accessible to veterans who have been playing the series for a long time, while doing a few new things to make the combat far more fun.

Bad: Targeting and UI Could Still Use Work

As great as the target lock option is, it seems as though targeting properly is still somewhat difficult in certain situations. I have always played PSO2 with a controller, and NGS is no different. The issue with target lock, is that, once locked, you can flip the right thumbstick to target another enemy or a different part of a creature’s body. This is integral if you’re trying to get a clear lock on a weak point, but many times, you may find your character locked onto a target you didn’t intend, or the lock won’t even register the part of the enemy you mean to target at all. Then you have another issue entirely, if you attempt to rotate the camera with the right thumbstick while locked-on, you also change your target! You can turn off this option in the settings, but it doesn’t always seem to work. 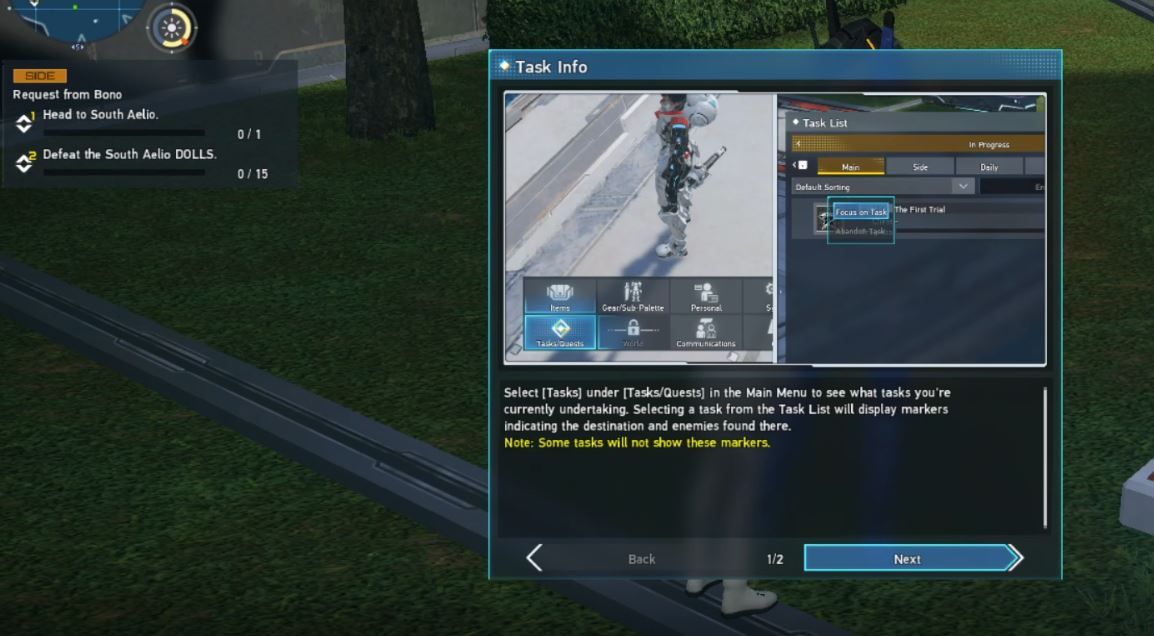 Which brings us to the UI. Phantasy Star Online 2 has a pretty rough UI, and NGS has streamlined it a little, but it’s still horrendous. There’s just too much there to flip through, and that gets compounded when you’re attempting to use a controller. Equipping weapons and building out your skill deck for veterans will still feel the same, but the menus always felt overwhelming, and in some ways, they kind of have to be. Objectively, there really isn’t a fantastic way to disseminate so much information in a compact space, but PSO2 has never made it particularly simple to really understand all of the menus you’re flipping through in an organic way. As a veteran, tossing out emotes and Symbol Art, while sorting through active quests is second nature, but it’s still a far cry from being “new player friendly”.

Good: What a Wonderful World

When I played the Japanese Closed Beta, there wasn’t much that I could understand from reading, but there was one thing that really carried me through while playing – the world! If you’ve never played a Phantasy Star Online game before, then traversing this new open world in NGS may not mean all that much to you, but it’s a stark departure from all of the previous games. Not only does New Genesis look amazing, with some very unique landscapes and immersive weather effects, but functionally, the world has far surpassed all former PSO titles. 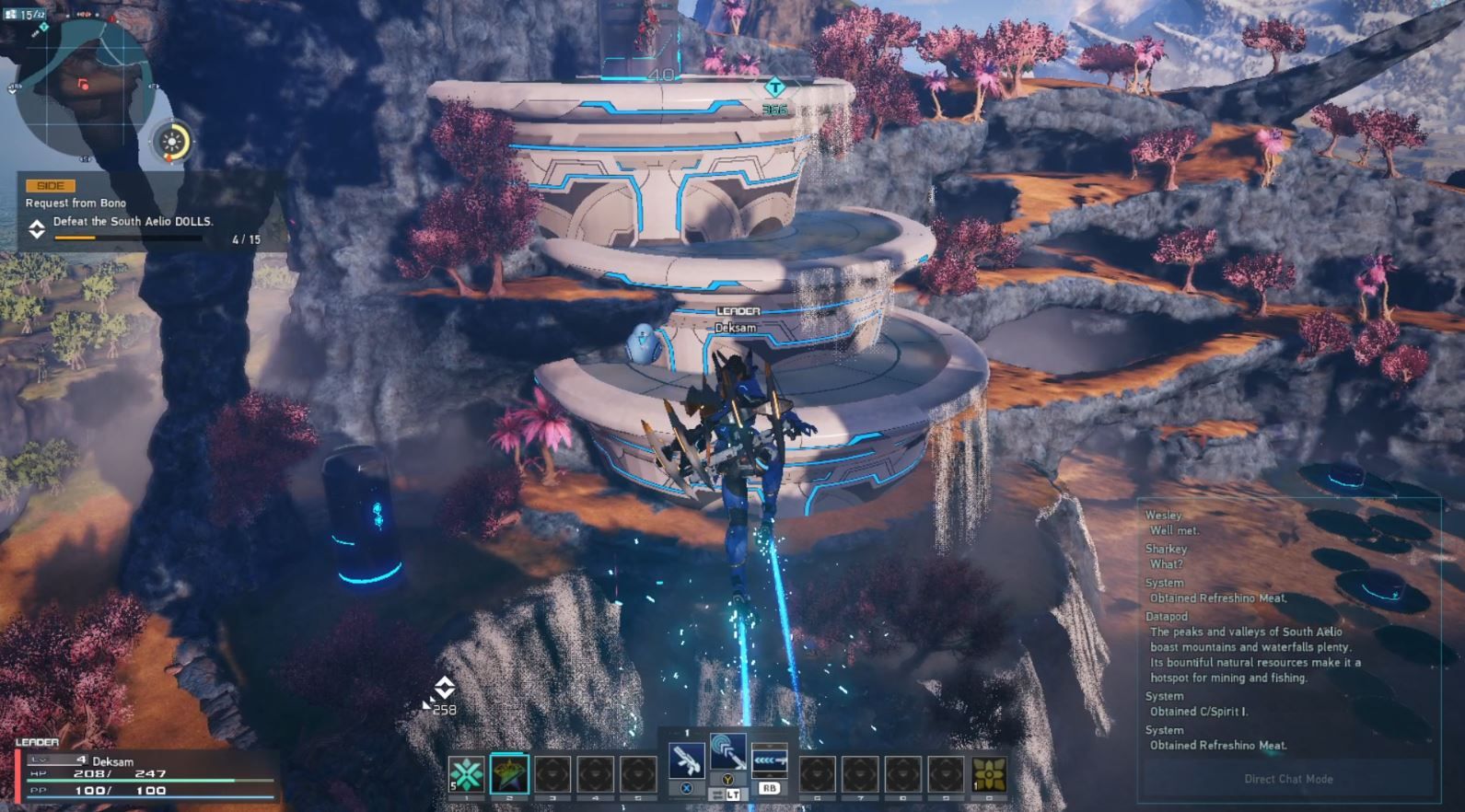 One of the main events of PSO2 and their compartmentalized worlds, is the “Emergency” system where players will have to respond to world events. This is not unlike the way games like Guild Wars 2 create open events where anyone can join in to complete a specified task. In New Genesis they also go one further than the old PSO2, as now, the entire world is open, so there are areas where specific trials and quests occur, and ARKS operatives will have to respond. In addition to regular trials and cocoon quests, which are new types of trials built around platforming and movement, Urgent Quests have also been relegated to certain parts of the world. Players will have to battle their way to the affected region to take part in these instanced events, which should be pretty simple to get to (once you reach the minimum Battle Power) but may be difficult to complete.

In PSO2 players could also travel the world, break open boxes and obtain a series of healing consumables. New Genesis changes this dynamic a little bit, allowing players to pick up Restasigne and Reversasigne consumables that are spread throughout the open world. This definitely streamlines the way players pick up important, live saving consumables without cluttering up your inventory. Players will still run into boxes filled with important items and money as they travel, and even encounter some special shielded boxes, not unlike some of the puzzle boxes that PSO2 has had in the past.

The Bad: How Much More is There? Because We Need More

The closed beta was short, and was quite restricted, and likely because of those two major factors, there just wasn’t a whole lot of variety in what we ended up playing. During the Japanese Closed Beta, it was hard for me to really get around and test everything I wanted to, mainly because I was locked into translating everything as I went, which was inconvenient at the best of times and downright confusing at the worst. In the Global Beta, I was able to get at least half the classes to 8 or higher through leveling and slotting subclasses. I upgraded my weapons and gear, and traveled as far as I could go before hitting a holographic red wall. 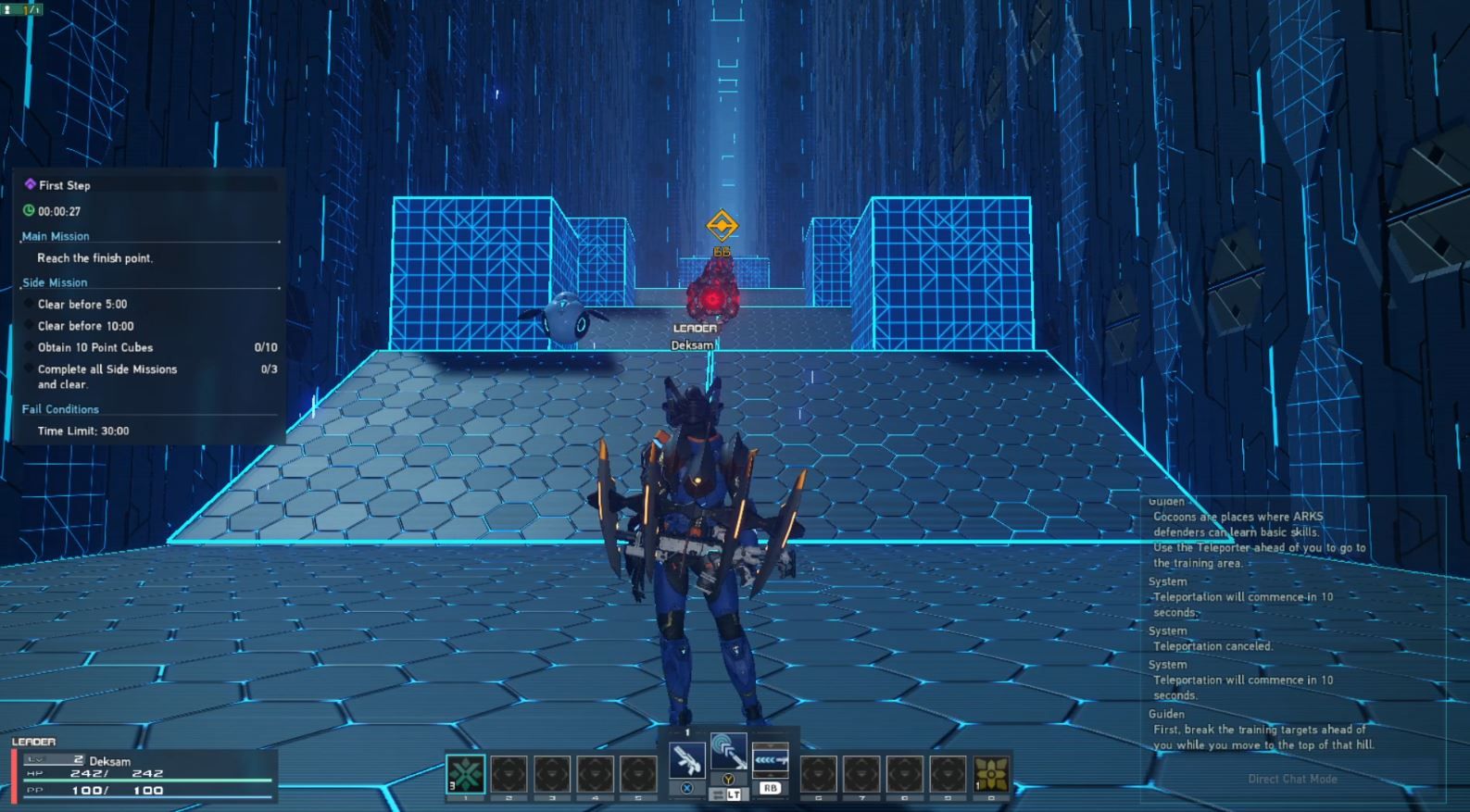 I chained trials back-to-back, suppressing enemies and protecting ships. For the short amount of time in the game, I got quite a bit done, and the one issue I had was that, after getting the gist of the new design and world, I started to run out of things to do. After looking over the map it was clear that there were some areas that I had yet to explore, but how much more is there? PSO2 had an interesting, but largely repetitive leveling structure.

Now, New Genesis is transitioning into a whole new phase of the Phantasy Star Online series, in new and exciting ways, but they will need to deliver far more than a dozen new enemy types and the small area surrounding Central City to keep players invested. SEGA isn’t new at this, and the Global Closed Beta certainly isn’t the place to showcase the end game loop, I just hope they’ve taken Phantasy Star Online 2 1000 years into the future with them and have a solid plan to keep us invested. Especially after creating such an amazing and exciting world.