As a Phantasy Star Online fan, forged on the Dreamcast and battle tested in Phantasy Star Universe and Blue Burst, I can unequivocally say that Phantasy Star Online 2: New Genesis is by far the best in the series. There is, however, one major factor that could determine how the game resonates with you even more than the core game loop itself. The community.

Phantasy Star Online 2: New Genesis (PSO2:NGS) in its current state, has quite a few technical bugs to iron out. Fortunately, SEGA isn’t exactly new to the online gaming world, and many of these detrimental server issues will get hammered out within a few short weeks. I do plan on going into the technical troubles and gameplay aspects at length in my review, and truthfully, some of these seemingly catastrophic bugs that many players have encountered this launch week, don’t seem to bother me. It’s not that I don’t experience frustrating lag and mysterious disappearing menus from time to time, but I know from experience with Phantasy Star Online 2, that these problems will eventually stabilize.

Same as It Ever Was

Instead, another problem has cropped up that impedes my enjoyment of PSO2: NGS, and coincidentally it’s the same problem that has existed in PSO2 for years. Unbridled ass-hattery from a small fraction of the, otherwise stellar, community. Please don’t misunderstand me here. The Phantasy Star Online 2 community is generally an enjoyable, helpful bunch. One of my favorite aspects of NGS is the deeply rooted mechanics that inherently allow you to fight alongside your ARKS defender brethren, working to defeat the DOLLS and emerge victorious during Urgent Quests. Even if you aren’t grouped with them, players will resurrect and buff you, pull difficult enemies away from you, and are trusting enough that they expect the same from you in return when they are in need. The help is always reciprocated. 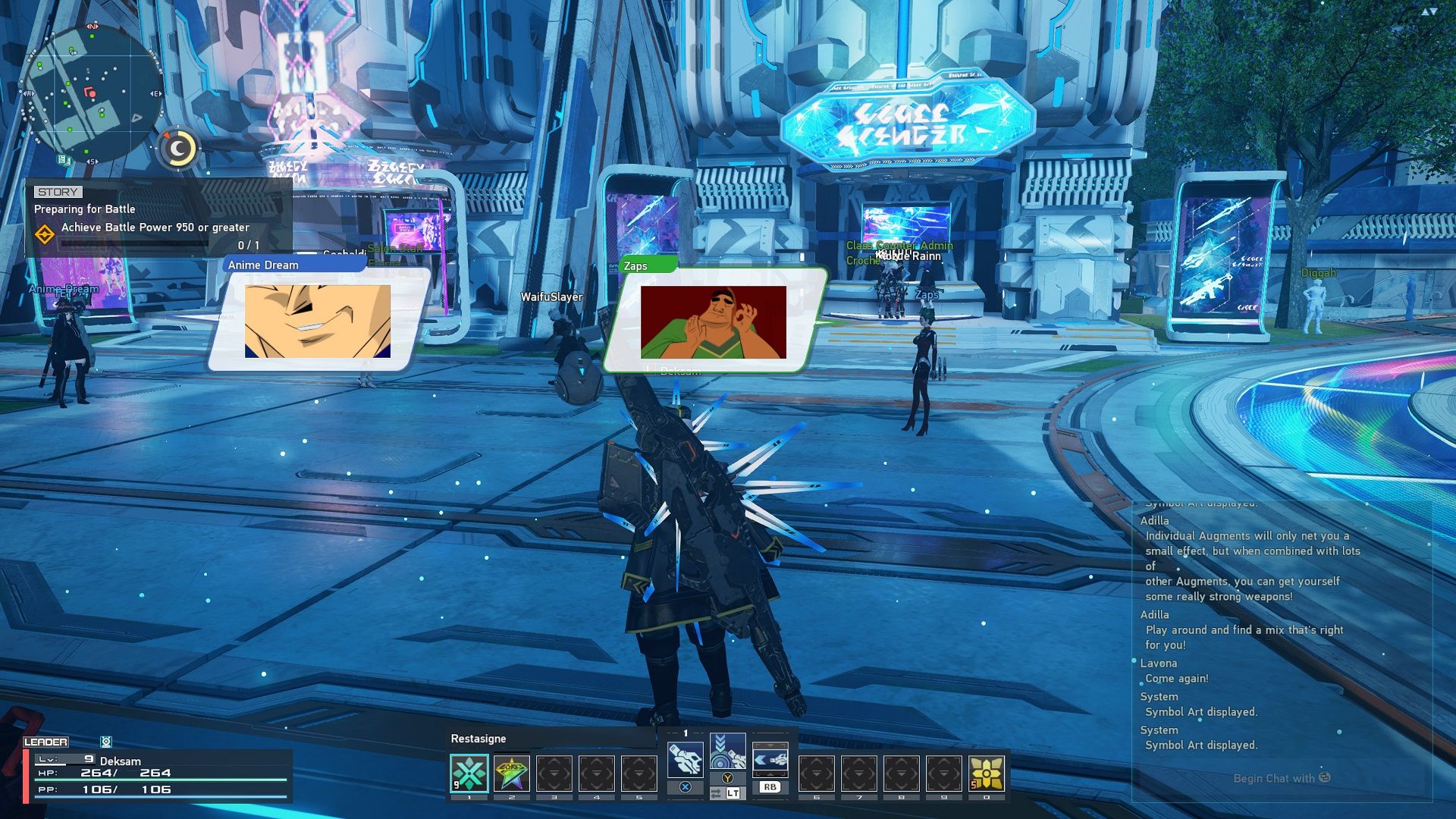 Every so often players will even use the Symbol Art system in the game to communicate with you or attempt to get a smile out of those around them. Symbol Art, in some ways, was almost revolutionary when it debuted in Phantasy Star Online despite how limited it was. For those unfamiliar with Symbol Art, it’s a system that allows you to create your own, for lack of a better term, emojis, some of which can be quite elaborate and silly. These chat symbols, when executed, show up on screen in a text bubble above the character that posts it. In some ways, when used, they remind me of old-school pop-up ads from the early internet age. Once someone starts to show off their Symbol Art, others quickly chime in, until your screen is inundated with all manner of images, from the informative, to the silly, to the inappropriate, and even the downright offensive.

Why Does It Matter?

I know what you’re thinking. “If it has always been a problem, why does it matter now?” Long gone are the days where silhouetting a phallus in Phantasy Star Online would be considered “clever”, if an argument could be made that it was ever clever to begin with. These days, some players show far more detail than a simple silhouette. In no way is PSO2:NGS a game for kids. With its M rating, a ton of racy clothing options, and a pole dancing emote, it’s abundantly clear that some form of sexualization was intended. Symbol Art, on the other hand, surpasses simply, “partial nudity” and “suggestive behavior”, and goes straight for the jugular, with explicit hentai and in some cases, blatantly racist images.

I’m not here to knock what someone likes in their personal pleasure palace, or to detract from their secret fetishes, be it animated, live action, or Japanese body pillow, but let’s be honest here, inundating players with these images during play sessions is not really the place to get a rise out of the general gaming population in Central City. The real shame is, Symbol Art is a fantastic form of communication. PSO2 has emotes, but they don’t pop up and inform you the same way Symbol Art does. Many of the players I play with execute their own unique Symbol Art to get their point across, just like an emoji or a Gif does. You have the option to turn off Symbol Art, but it’s a system that is uniquely Phantasy Star, and the problem isn’t in the feature, it’s with the bad actors that ruin it for others, and limit the games’ reach. 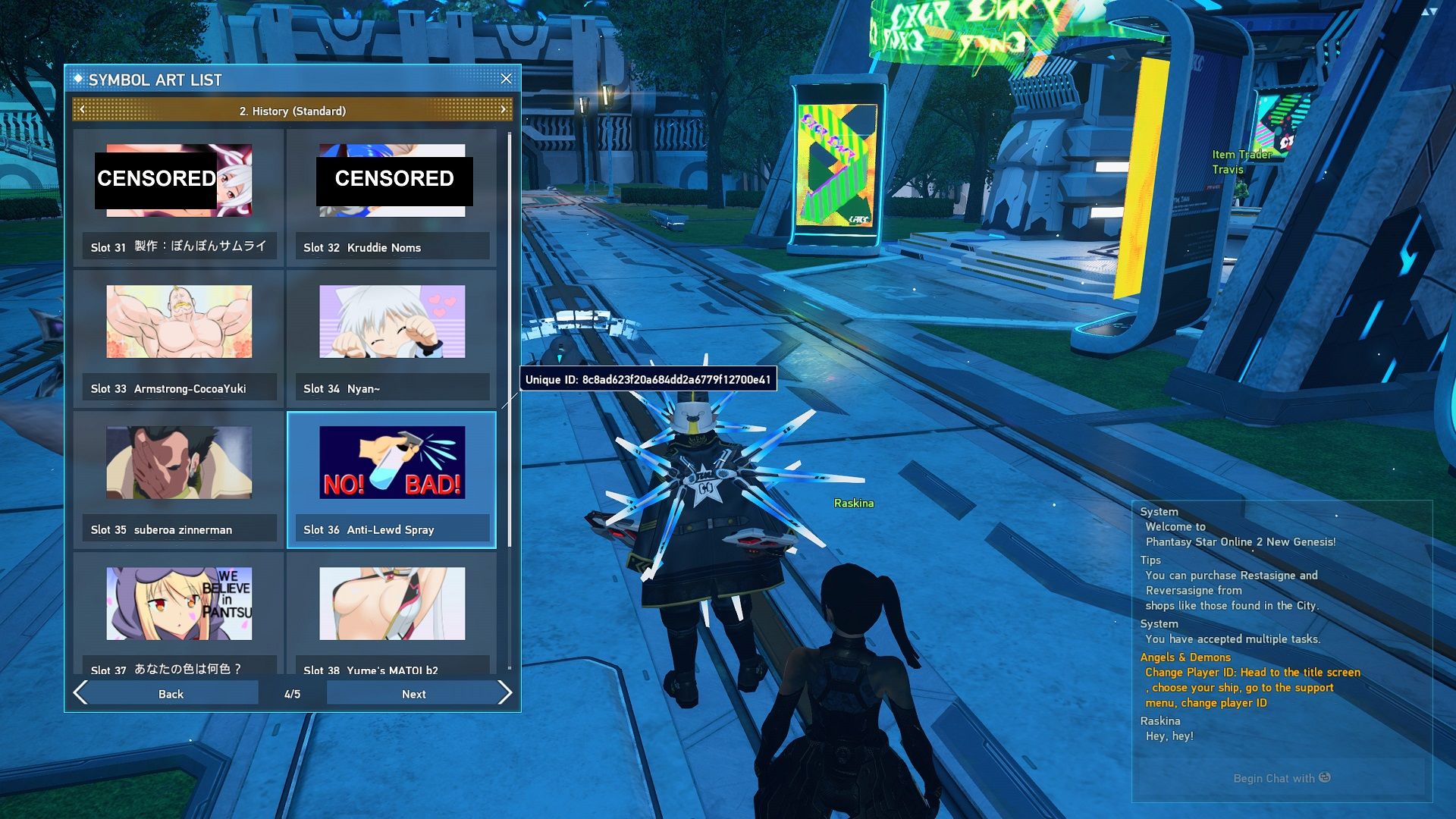 For example, I’m wary of streaming Phantasy Star Online 2: NGS on Twitch and YouTube, simply because at any moment, my screen could be filled with dozens of X rated pictures. It has also made me rethink recommending the game to my friends who have children. It’s bad enough that, during my recent play session, as I was returning to Central City, my wife noticed several of these chat bubbles and asked if I was reviewing “these kinds” of games now. The issue gets compounded by some difficult to navigate menus to report players. The menus in New Genesis are still somewhat confusing, and many players may not even know that they can turn Symbol Art off, or where to go to even do that. (For those looking to turn it off, it’s in the menu under Settings – Sound/Chat – Display Symbol Art of Other Players = Hide)

What Else Can We Do?

There are a few other options that players can employ if they want to keep Symbol Art on, but remove the pornographic or discriminatory pictures. In the Symbol Art menu, you can see a history of the most recent bubbles that were displayed. You can choose to save any of the images you just saw, easily spreading the inappropriate images, or block the Symbol Art you no longer want to see – but something is absent from this menu. A report option! Simply reporting a player is quite convoluted, and it would be far easier to quickly report the offending Symbols directly from the history menu, especially due to the fact that you may be too busy to stop and search through the nearby players menu to find the player responsible. 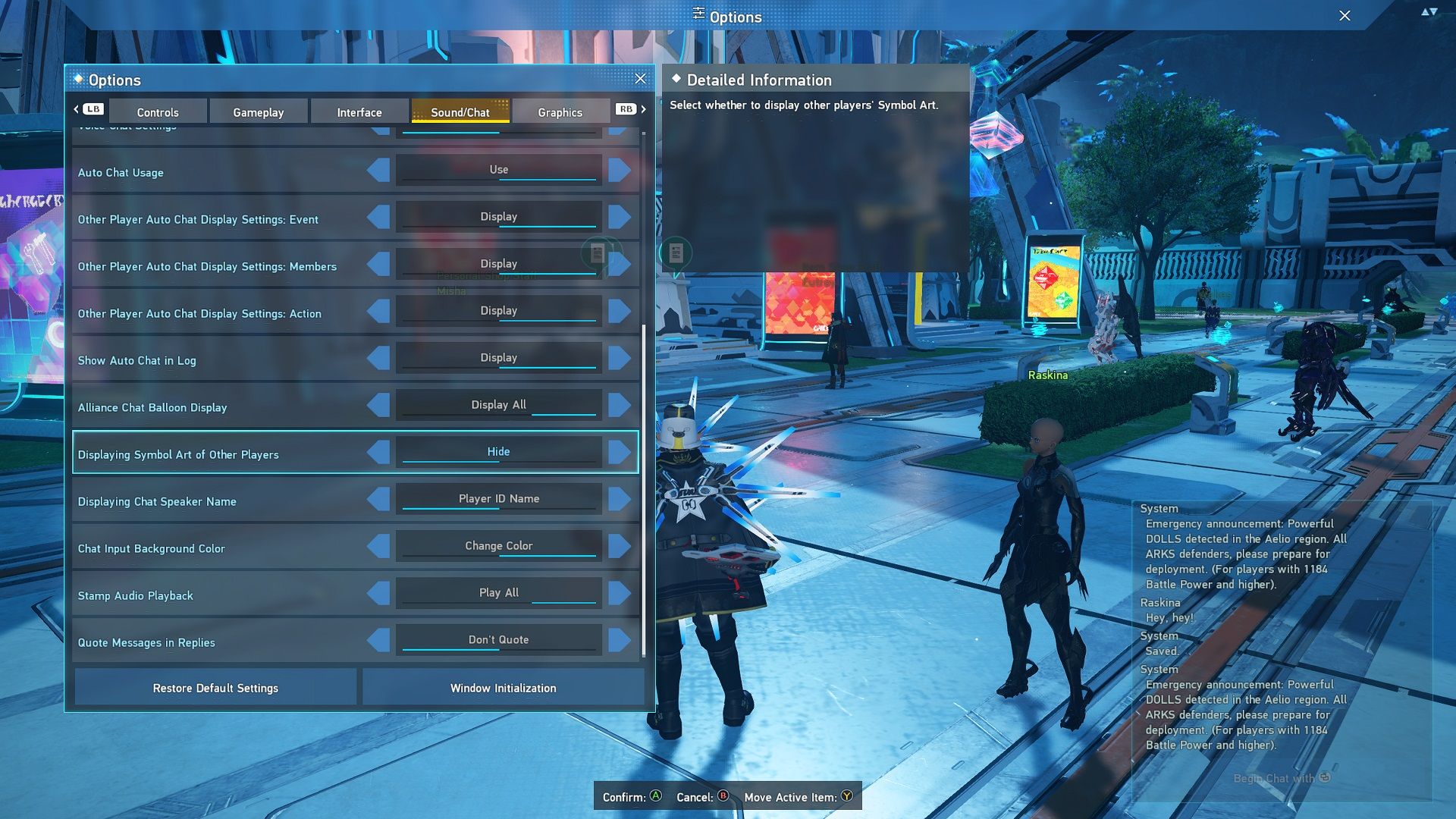 I reached out to SEGA for comment regarding this feature and its ongoing prevalence in PSO2: NGS.  At the time of this article, I had not received a response, which is understandable as they are likely all-hands-on-deck getting the game in a more consistent state of play. Some have accused SEGA of looking the other way when it comes to Symbol Art discrepancies, as the Japanese version has been rife with them for nigh a decade. Then again, perhaps they believe there is no way to stop these bad actors, and instead can only point players to deactivating one of the coolest features in the game, if we wish it to stop. Either way, let this be a warning to those out there that are looking forward to checking this game out. You never know what you might end up seeing. Phantasy Star Online 2: New Genesis is a ton of fun, enjoy yourself, just – don’t enjoy yourself too much while observing lewd Symbol Art.