Are you thinking about heading to Halpha to defeat the DOLLS and save the world? Whether you’re new to the Phantasy Star Online series, or you’ve been away for a while and you’re ready to see what all the commotion is about in New Genesis, here are 8 tips that I wish I knew when I first hopped into PSO2: NGS.

If you’ve spent some time in Phantasy Star Online 2, you’ll know that class selection can be pretty daunting. Sure, you can swap classes at any time, but with 13 classes to choose from, and skill trees that can be overwhelming, grinding out 100 levels to feel out the class at the top can be a commitment to say the least. New Genesis changes all that with a few features that make it far easier to swap classes and find the one that is right for you. 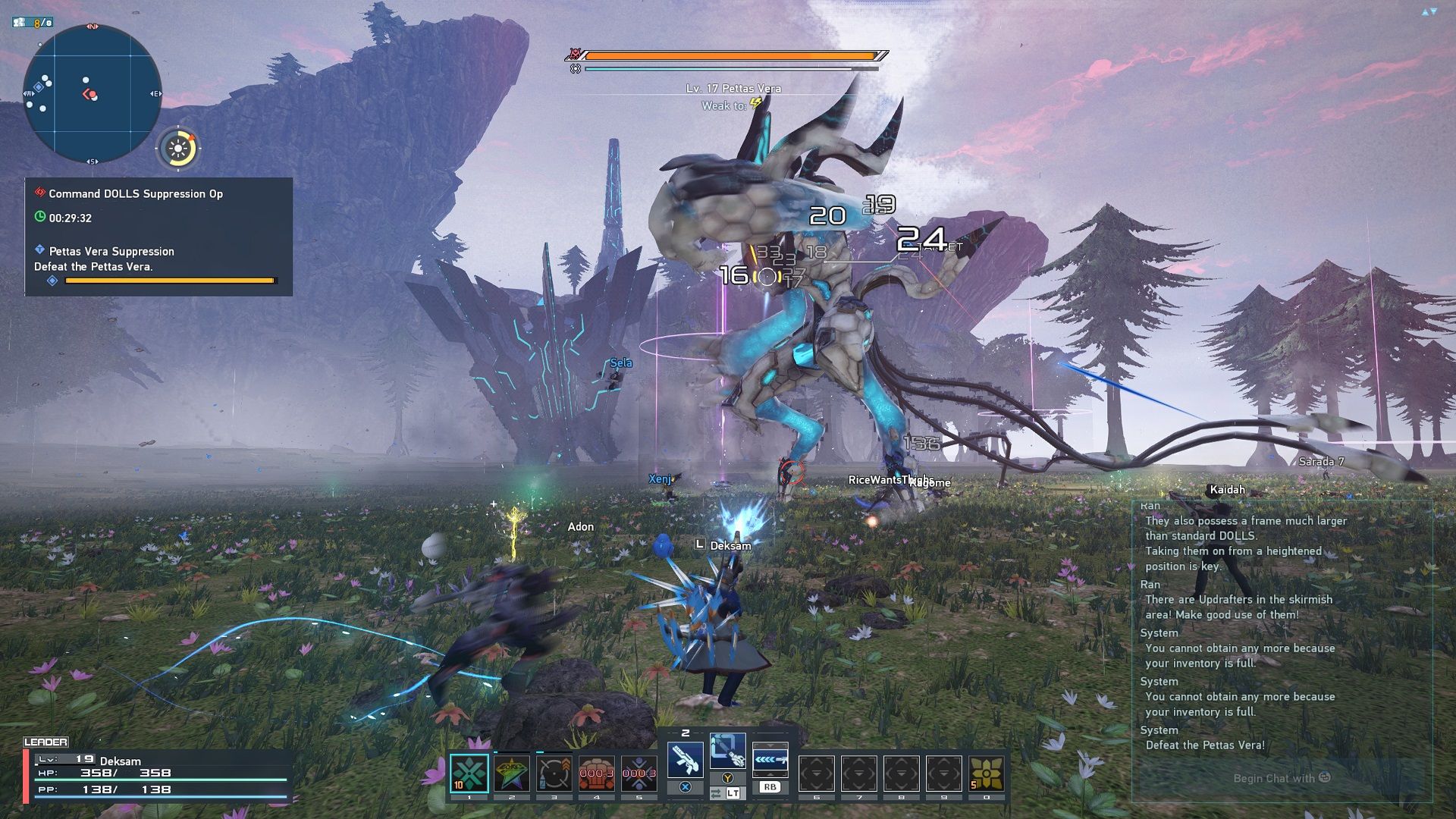 For example, once you’ve earned your skill points from Cocoons and Tower quests, you’re free to use them on any of the classes you swap to later on, even if you haven’t leveled those classes at all. Locking in your skill points on new classes will increase your Battle Power, and immediately grant you access to class abilities that used to be locked away by the level grind. With only 6 classes to choose from at launch, NGS limits the number of class options players can choose from, which is great for new players. It’s also important to note that currently, max level in PSO2: NGS is only 20, and even though the last 5 levels can be kind of a slog, it’s still far better than the 75 levels that originally launched with PSO2 Global. Once you’ve leveled one class to 20, don’t forget, you can slot it as a subclass and still benefit from the Battle Power boost, weapons, and gear you’ve upgraded along the way, while gaining experience on completely separate classes.

Use the Personal Shop

My goodness, that rare drop rate on PSO2: NGS can be brutal. In my experience, half the rare drops I end up receiving are armor pieces that are far worse than the free ones you can obtain from some modest exploration, and I never seem to get the weapon drops I want. Luckily, PSO2: NGS has an answer to that, and it’s one that Phantasy Star Online 2 players will be well acquainted with – the Personal Shop! 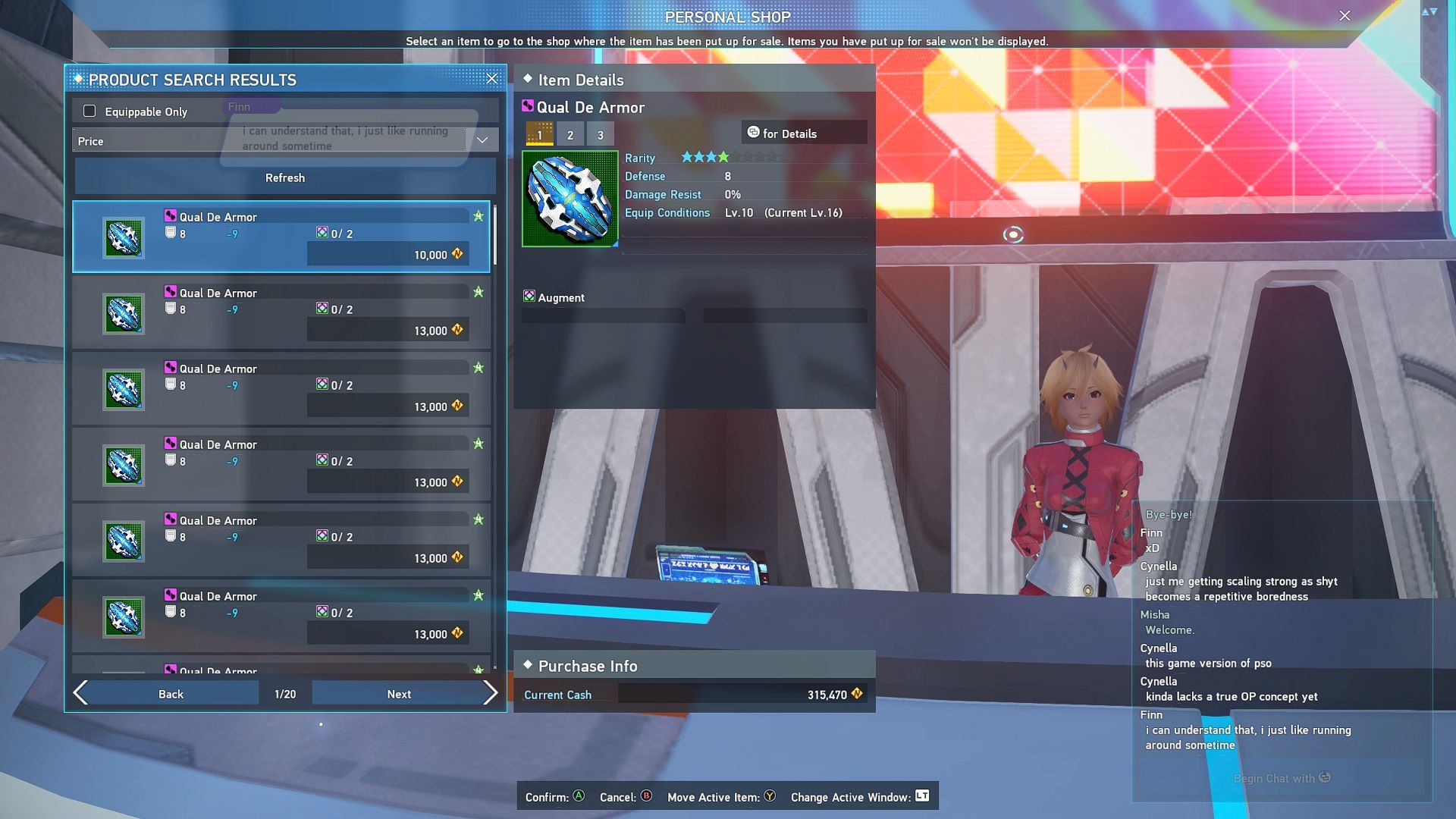 Right now, rare weapons and armor are relegated to 4 stars, which means, in the grand scheme of things, they aren’t anywhere near the end-game 15-star rarity weapons that Phantasy Star Online 2 has. That being said, you can generally find adequate, or best in slot pieces in the personal shop for just a few thousand meseta. The first week, some prices were a little out there for base level 4-star gear, but they’ve come down substantially, as more people receive rare drops they’ve grown out of or don’t want to use. Once adequately leveled, the one-stop personal shop will get you geared up far faster than waiting for that special gear piece to finally drop from a rare mob. On the flipside, if you’ve subscribed to the premium package for PSO2: NGS you can run your very own shop, which will earn you thousands of meseta, even if you don’t end up selling 4-star or better gear. Weapons and armor of 2 and 3-star rarity along with augment capsules sell very well and can earn you hundreds of thousands of meseta far faster than if you were to grind it out on mobs and selling to the NPC shop alone.

Exploration has always kind of felt like an after thought in Phantasy Star Online. This was mostly due to the instanced nature of the game loop. You’d zone in to a level, run around battling mobs to complete an objective, and maybe you’d find some boxes with items along the way. New Genesis now has a fully open world, complete with dedicated zones with special rewards for exploration. These exploration rewards come in the form of Red Boxes. 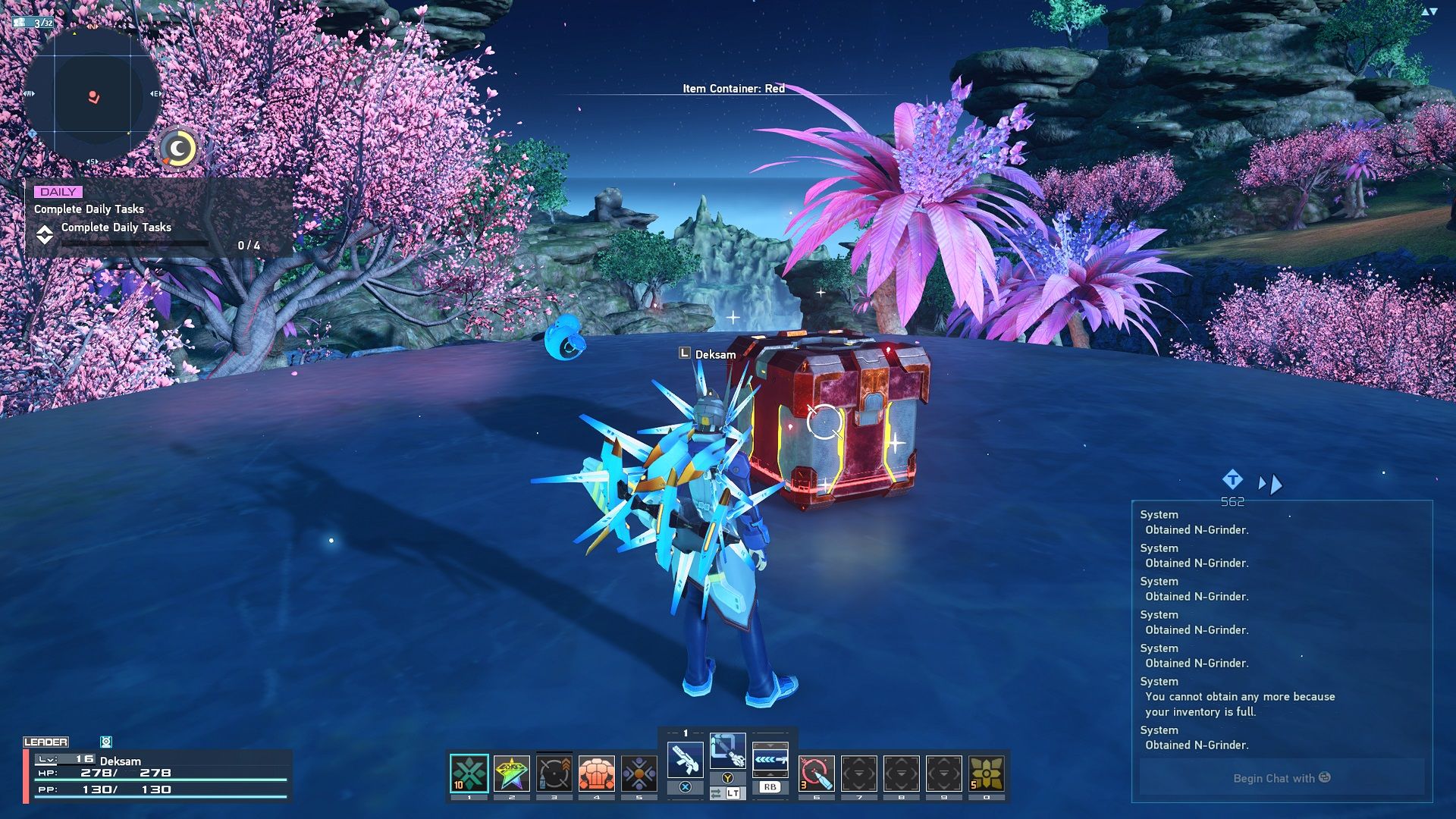 Red Boxes are particularly special because you are only able to acquire them once per account. Inside these boxes you might find a large amount of meseta, some Star Gems (SG – a premium currency), or 4-star gear. Early on, you may want to focus your attention on picking up three of the four-star armor boxes, even if you can’t use all of them right away. Slotting these when you are finally the appropriate level will give you a nice boost to your Battle Power, and it can save you some meseta from having to buy 4-star armor pieces from the shop later on. The meseta and SG currency will also come in handy, especially if you want to level faster, as SG can be used to purchase modest XP boosts that last 24-hours, and will help you get to 20 more quickly.

Earlier in this article I spoke briefly about the benefits of obtaining skill points. Skill points in Phantasy Star Online 2: NGS are dished out differently than in most other games. Most games will give you skill points every time you level up, but in NGS you’ll need to complete Cocoon and Tower missions to obtain the 20 skill points available in the current version. Luckily, obtaining skill points is quite easy in most cases, and very early on you can obtain several on just your skills alone. 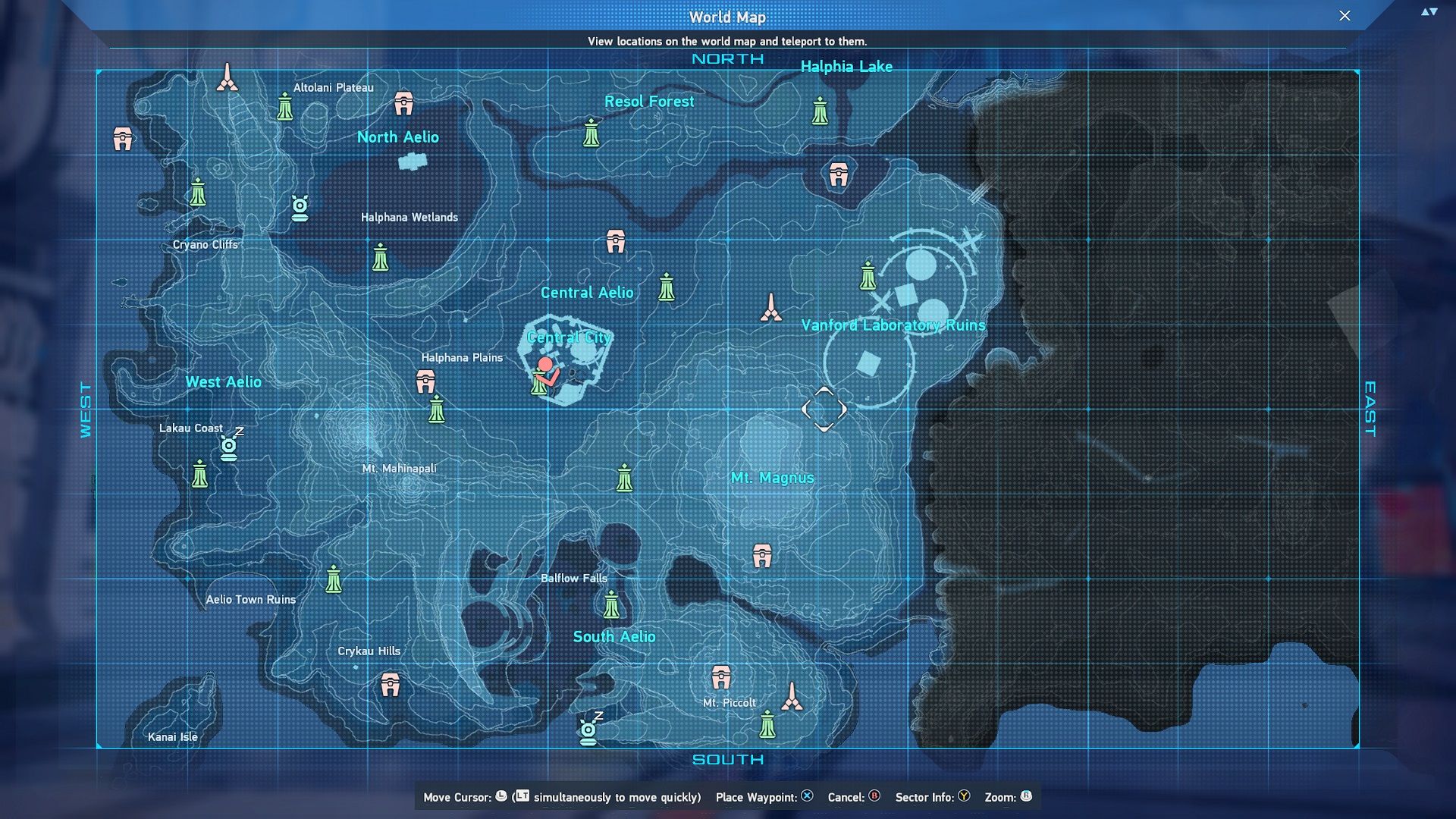 Each Cocoon or Tower will have a recommended Battle Power level. These levels are more of an indicator as to what level you should be and what Battle Power you might want to be at to complete the task. For me, I completed most of them when I was far under leveled, simply because my Hunter/Ranger combination is notoriously difficult to kill, and you aren’t required to complete the missions perfectly to obtain the skill points. Really you just need to complete them within the time frame, and you’ll receive your skill points, you can come back later and worry about your star rating if you so choose. Here are 6 of the easiest Cocoons and Towers that you can likely complete with a little determination prior to level 10:

Raise Battle Power as You Go

Something new in Phantasy Star Online 2: New Genesis is the inclusion of Battle Power, which essentially equates to a gear score. As you play, you’ll find that some quests will be gated by your Battle Power, and this can severely limit your progression, if all you’re looking to do is hit that 1184 Battle Power mark so you can play some Urgent Quests. Every so often I still see questions in chat about raising Battle Power, and while the game tries to inform players on how to increase their Battle Power, it can still seem confusing for some, who just want a quick remedy so they can continue their questing. 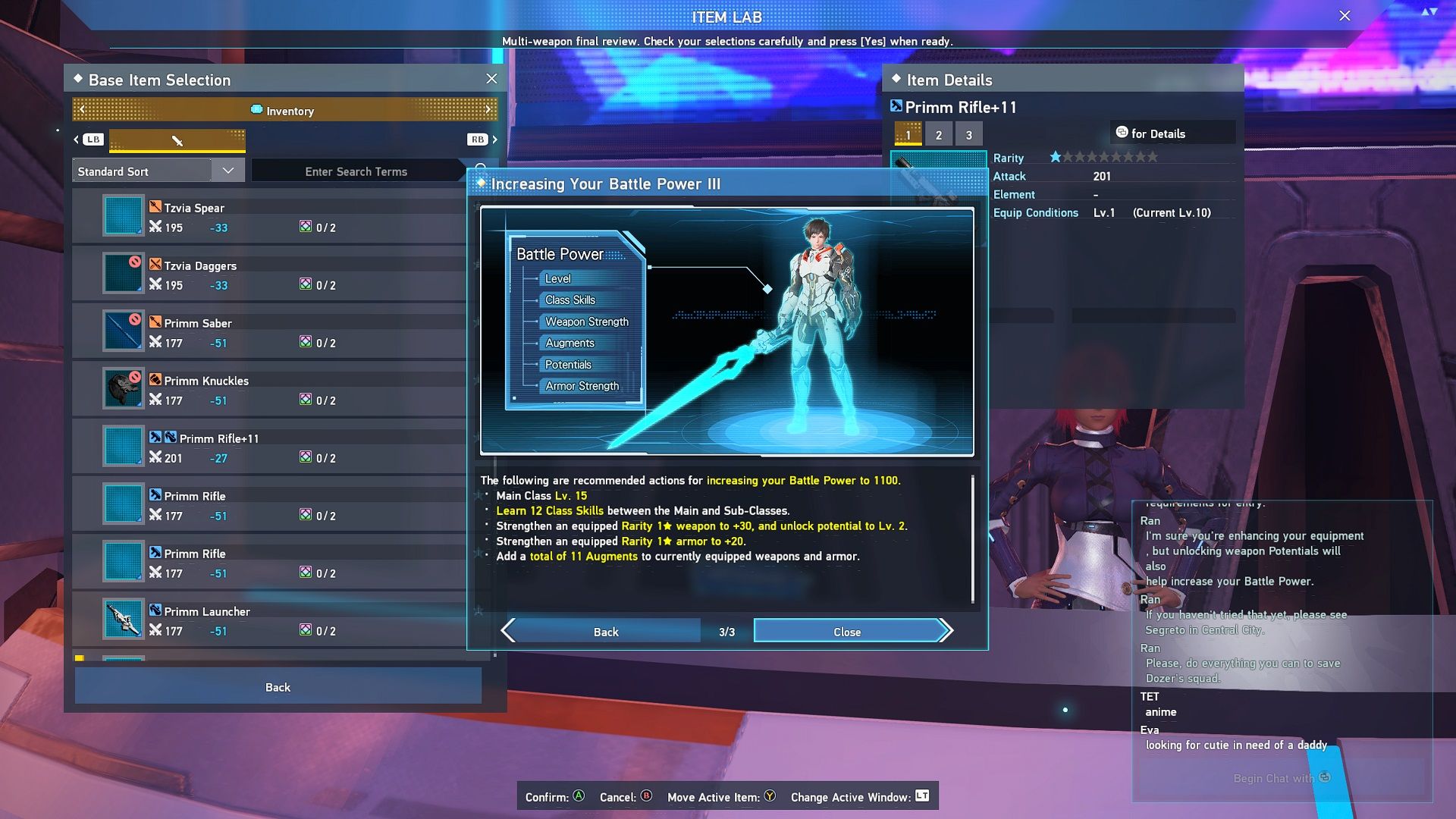 Luckily, Battle Power increases in a number of ways, and you’ll find that if you aren’t completely mindful about Battle Power early on, you may find it difficult to progress if you can’t pinpoint exactly where you’re lacking. To that end, here are some quick tips that will help you raise your Battle Power organically as you go.

Doing these few things as you level will ensure that you stay on top of Battle Power, so that you aren’t stuck in a monotonous, confusing grind-fest once you’ve completed your story and side missions.

Use Multi-Weapons for More Abilities

Phantasy Star Online 2 not only has over a dozen classes, but each class has quite a few skills that players can choose from for each weapon type, which seemingly gives players ample choices to build out their skill deck. In New Genesis players may notice that many classes don’t have as many options for their skills, which can certainly be disappointing if you were hoping to have skill sets that differ wildly from other players. 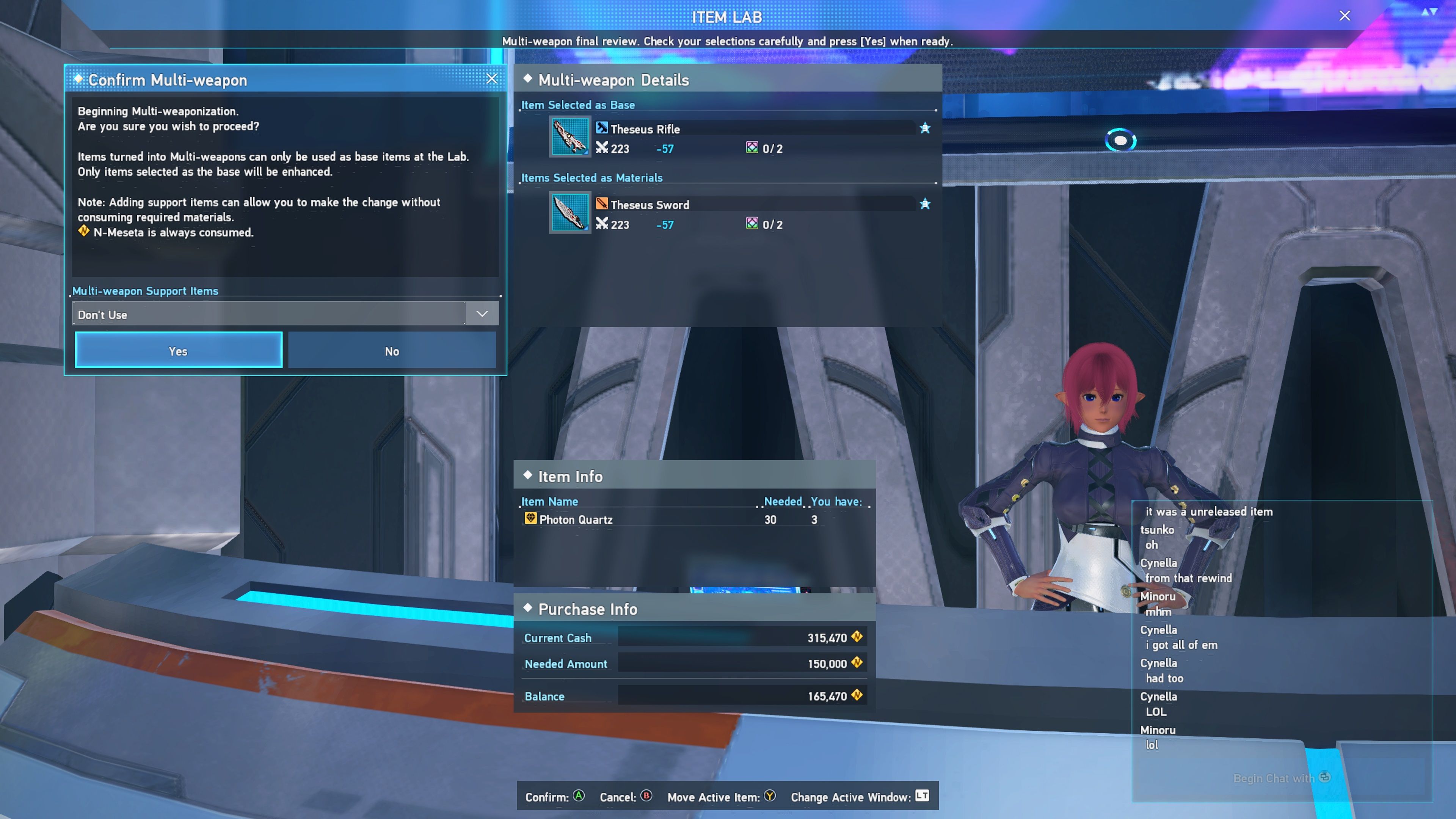 There is a way to circumvent this limitation without having to swap through several weapons at a time. New Genesis allows players to create Multi-Weapons! By taking two weapons of the same series, like a Primm Rifle and Primm Saber, you can create a new weapon that can use the skills of both weapons, without having to swap anything in combat. Granted, creating a Multi-Weapon can be expensive, running you upwards of 150K meseta at times, but it is definitely worth it so that you can utilize the best skills from your favorite weapons whenever you need them, and at the touch of a button. Multi-Weapons also give you the ability to use class skills that require a class or subclass weapon equipped to execute the skill, giving you even more options on your Sub-Palette. Keep in mind, to create a Multi-weapon you’ll also need an ample supply of Photon Quartz which you can find adventuring throughout the world.

Now that you’ve leveled up your character, you’ve created a Multi-Weapon, and you’ve slotted your skill points, you’re probably also modestly familiar with the Sub-Palette. Early on, you’re taught to setup a Sub-Palette with your Photon Blast, which you’ll need to do to pass the First Steps Cocoon. You’ll also notice that Restasigne (Healing) and Reversasigne (Resurrection) consumables are on your Sub-Palette as well. These are just the tip of the iceberg when it comes to the abilities you should have on your Sub-Palette bar. 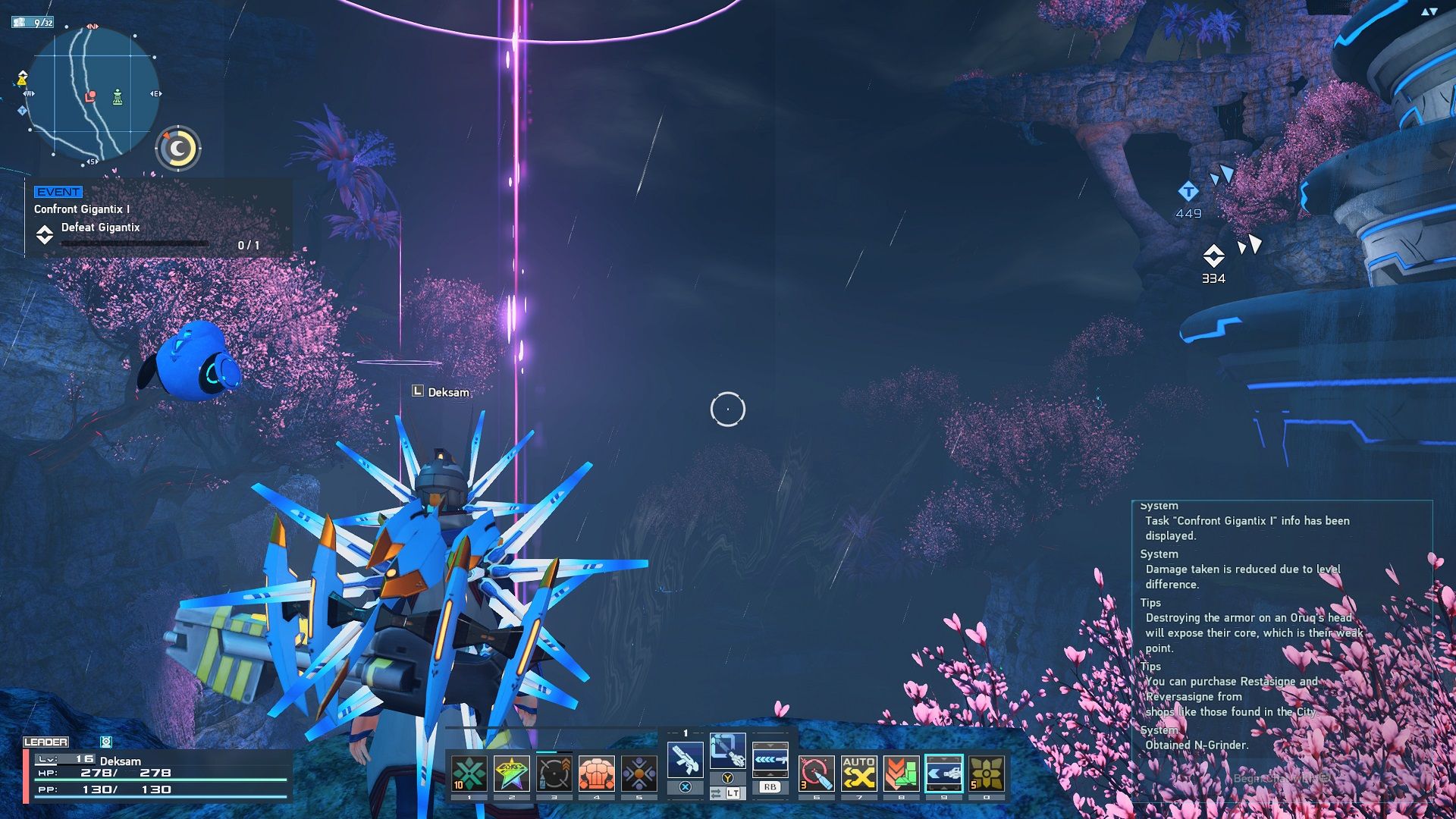 As you earn skill points, you’ll start slotting them into areas of your class tree that might unlock abilities for use later. You’ll want to slot these abilities on your Sub-Palette for use later on. Depending on these abilities you may find that some will require you have a certain weapon equipped, or a particular class selected as your main class. Quite a few of these abilities can boost your damage or defense, and shouldn’t be neglected. You can also slot weapon abilities on the Sub-Palette as well, which you might find beneficial, if you run out of space to house all of your favorite abilities on your weapon deck. Make the Sub-Palette work for you and enhance your play style, it can do much more than just house your healing and Photon Blast functions.

Complete Your Daily and Weekly Quests

Leveling quickly in PSO2: NGS can take some time if you really want to rush to the current endgame level of 20. If you’re not careful, you can quickly run out of meseta, as you level up your weapons, and stamina, as you grind for hours on end to get to that next level. Don’t work too hard, when you can work a little smarter. Take a few moments to complete your Daily and Weekly Quests, which will earn you some easy XP, and 200K meseta – more than enough to aid you in buying, and building up your weapons and gear. 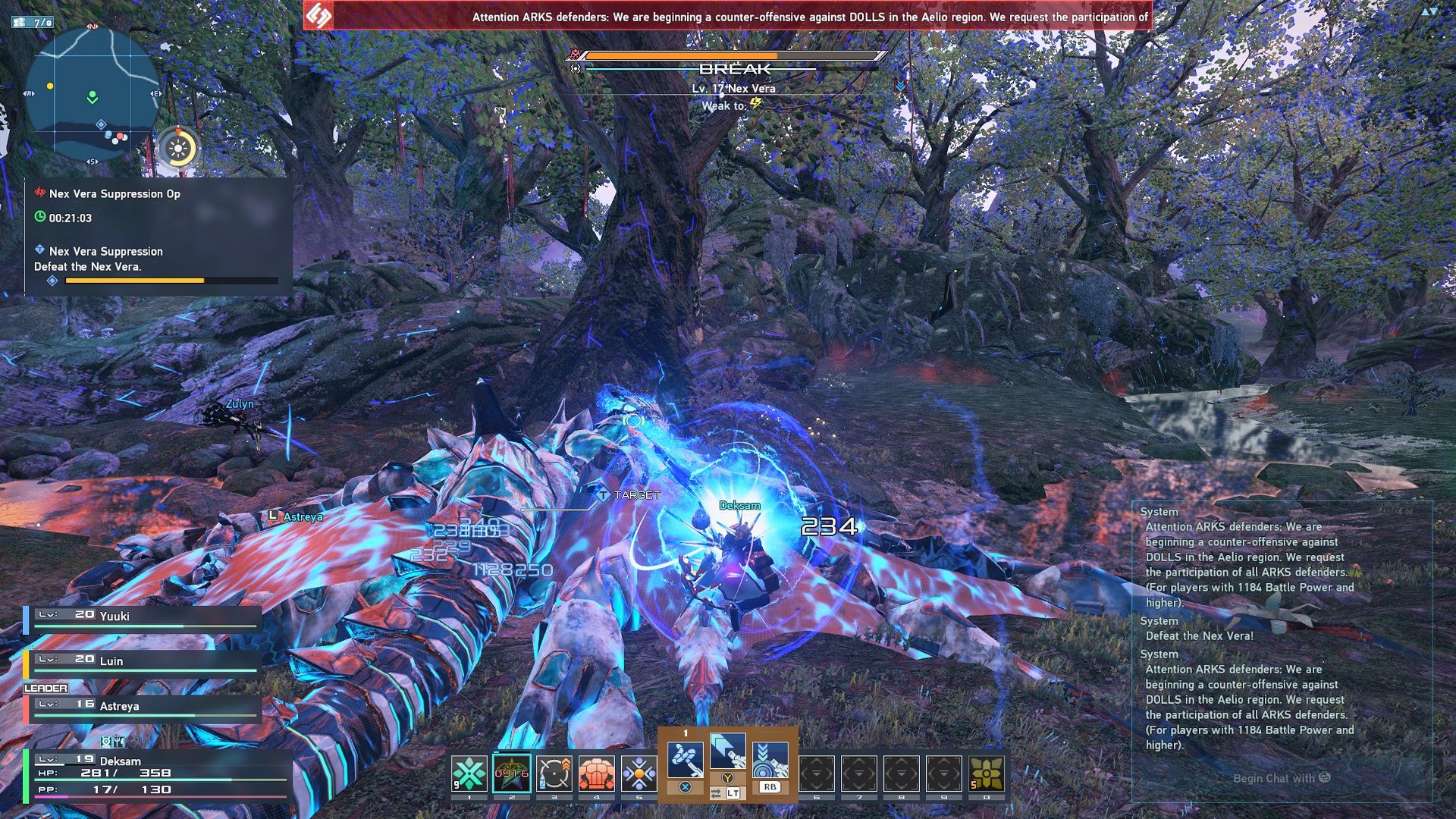 SEGA has been working hard at stabilizing Phantasy Star Online 2: New Genesis while bringing more quests and content to the forefront, but once you’ve completed your main and side missions, there isn’t much else to do aside from mindless grinding. There is ample time to slowly work your way towards maxing out multiple classes without burning yourself out by grinding your mind into pudding. Spend 20 minutes with your daily quests, and don’t feel obligated to do too much. SEGA will seed the game with more to do in time, just like they did with Phantasy Star Online 2. The rewards for the bare-minimum daily and weekly quests are definitely worth the modest time investment if you start to feel burn-out setting in.