Now that Phantasy Star Online 2 has officially released on XBOX One, with a PC release on the way, more players are entering the game and quickly getting overwhelmed by 8 years of content, hitting them all at once. After weeks of testing and trial and error, there were parts of the game that I wish I knew before I started. These tips will certainly aid new players, and maybe even a few old players, in getting the most enjoyment out of Phantasy Star Online 2.

Whether you are a new player, or just returning from a long hiatus on the Japanese servers, there is no question that Phantasy Star Online 2 can be pretty daunting if you haven’t spent a lot of time with it. Even as a Phantasy Star Online veteran, I had foregone playing PSO2 on the Japanese servers in a silent protest (well, more like in anguished hopefulness it would come to the west), only to realize that I wasn’t playing as efficiently as I could be in PSO2.  No matter if you decide to wait for the PC release at the end of May, or you want to dive in right now, here are 5 tips that will help you on your journey. 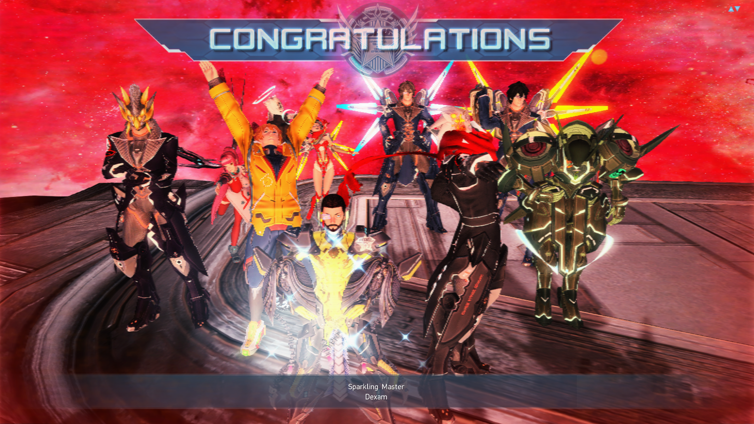 Missions Can Be Grouped and Stacked

When I first got into PSO2, my plan was to run through every single expedition mission, and complete them all at every difficulty level.  While that plan is solid, if you want to take the long way around when leveling, there are ways to not only speed up leveling, but to also make your challenges more… well… challenging.

Once loaded into PSO2, with your class picked, and initial missions completed, you may want to pick up a few missions to begin the long grind to level 75. When you head to the mission’s counter, you will see a list of recommended quests. These quests change every day.  If you select one, it will then load a listing of client orders that you can pick up, each of which is a separate quest, by another NPC somewhere else in the hub.  You can select all of these missions at once, so that you can complete all of them while you’re out and about on the mission. 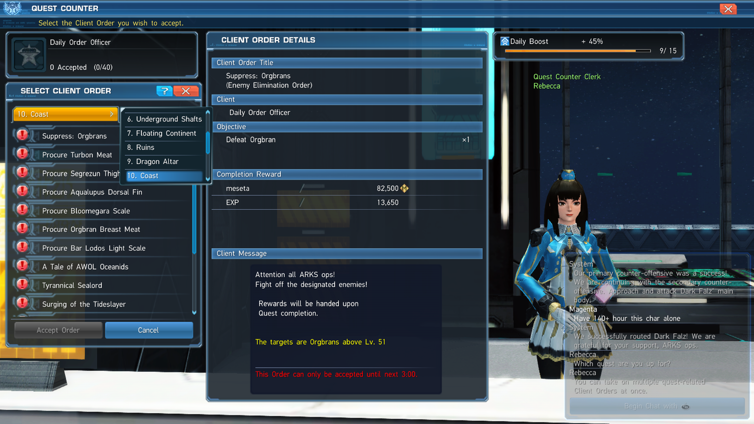 Most players figure this out pretty early on in their game play, but mission stacking goes far beyond that. Let’s say you want to run a forest exploration, or you have a daily mission pop up that requires you kill an enemy that only resides in the forest. You can then travel to each NPC quest giver, and check change the quest filter from “All Quests” to the particular area you will be heading to.  This will pull up every quest available for that area.  Many of these quests won’t even appear on the recommended quests list! This is one way to stack a ton of quests at one time, so that you get the most out of every expedition that you do.

Send Out Your Auxiliary!

Early on in your mission log, you will be tasked with creating an Auxiliary, which is kind of a mixture between an NPC partner, and a pet. Auxiliaries generally stay in your house, but they can join you on your missions and fight alongside you. After you obtain an Auxiliary and use the salon shop to outfit them however you choose, you then have to place an Auxiliary Console in your personal quarters, and place them on the console. From there, you can send them out on their own missions. 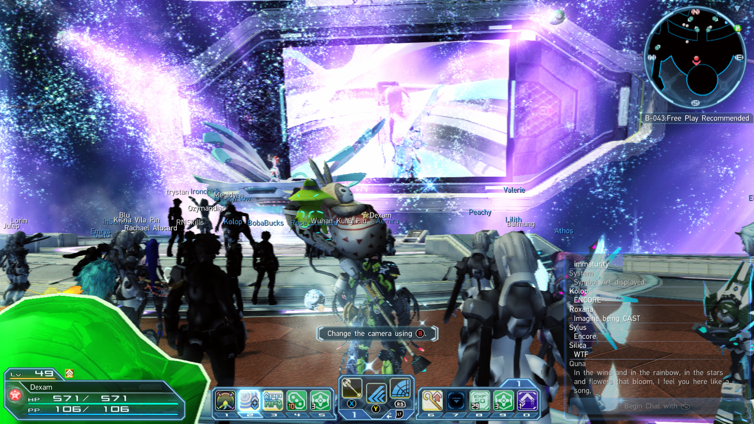 For much of my time, I neglected my Auxiliary, until one day, I realized that, no matter how many times I brought my Auxiliary with me on missions, she was not leveling up at all. It turns out, that in order for your Auxiliary to level up, you have to send them on their own missions from the Auxiliary Console. These missions take roughly an hour, and upon returning, your Auxiliary will not only gain levels for successfully completed missions, but they will also return quest items to you, so that you can turn in quests and gain experience as well.

Meseta makes the world go ‘round. At least in PSO2, meseta is the in-game currency that you will need if you wish to upgrade your gear, buy player goods, or utilize some of the powerful consumables that are sold at the Medical Center shop. Sometimes, earning meseta can go too slowly for your liking, especially when some player shops might be selling something you want for tens of millions of meseta. Don’t fret too much, as there are some easy ways to earn more meseta, faster. 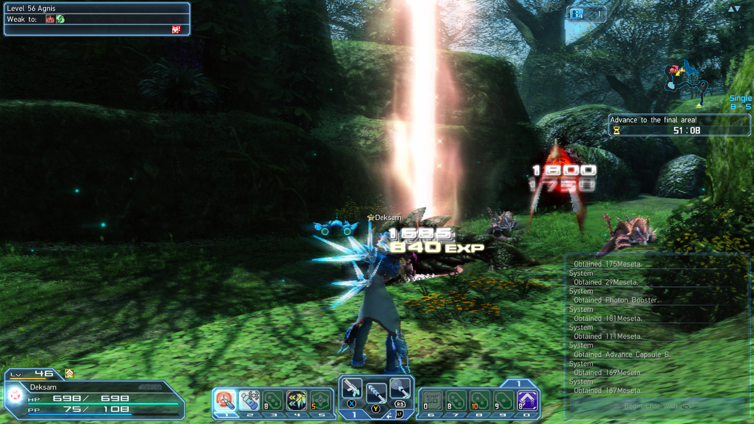 Daily and Weekly Missions will net players millions of meseta, as long as you’ve made it past level 50. The great thing about these daily and weekly missions, is that they can be completed on multiple characters. Even free players can have more than one character, which will give them plenty of opportunities to earn the millions they will need for those highly coveted weapons they are looking for.

While meseta isn’t everything, it will surely help you along when you’re ready to outfit your characters with the best gear available to you. You will still have several other currencies that you will have to find along your journey, but at least meseta isn’t one that you should be too desperate for as long as you have multiple characters seeding your bank account.

The Story is Better Told Elsewhere

I love playing PSO2. What I don’t like doing is logging into the game and watching hours of story content. In Phantasy Star Online 2, there is a very long, in depth story, that will take a good portion of your time. One of the main issues, is that it is broken up into so many different pieces, that it can take a long time to go through it all, and most of the story pieces aren’t even interactive. Very few of them result in a boss fight, or even a romp through an expedition mission. 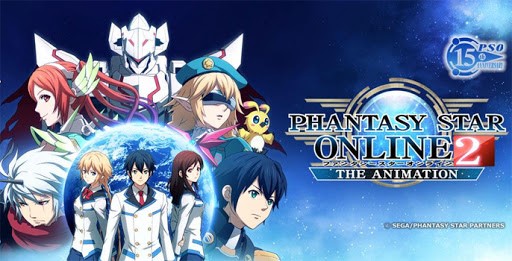 What surprised me even more, is how closely PSO2’s in-game story follows the PSO2 Anime, or perhaps, I should say the Anime follows the in-game story. While you do have a lot of missions that require you to walk through pieces of the story, if you find it uninteresting, or bothersome to watch every piece of the story in bits and pieces, feel free to skip the majority of it, and fire up the Anime, which does a great job with the narrative, even if it does get a little dark at times.  After spending several hours skipping through story portions in-game, I can say the Anime does a better job at keeping the storyline interesting too.

This was touched on briefly before, but I’m going to touch it again. In PSO2 player shops are by and large the best way to get geared up quickly, but they are also great tools for research.  By heading over to the Visiphone and getting into the player shop, you can see which items are the most popular, what affixes are highly sought after, and even what those affixes do. If you do this early enough, you may even be able to pick up some of the most desirable weapons way earlier than you thought!

For example, many weapons have a minimum stat requirement in order for you to equip it. That’s important to note, because it doesn’t necessarily mean there is a level requirement, if you are putting your skill points in the correct talent trees. If you stay informed on where you want to end up gear-wise, you can potentially get there much faster as long as you plan ahead.  Thinking ahead doesn’t have to stop at weapons either. Buying skill units, to get the highest tier skill you can find is quick, easy, and inexpensive when using the player shop. 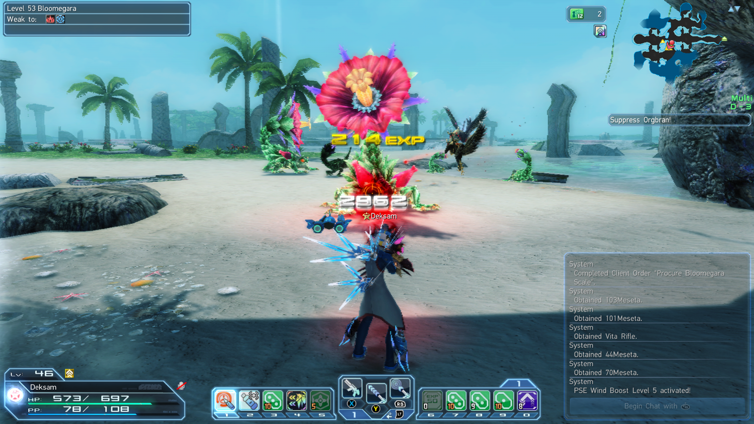 When I start a new character, and have a few thousand meseta to burn, I’ll head into the player shops to see what abilities they have for my class, and I’ll buy several of them at their highest level, so when I’m able to use them, I won’t have to hope for a drop. It’s also important to note that many of the abilities are the same price, no matter if they are level 1 or level 10! This means that for the vast majority of abilities you are looking for, you won’t spend very much, and you’ll have everything set for when you’ve grown in power enough to use them.

Another good use of player shops is for cosmetics. While you won’t find every cosmetic item available in a player shop, you can certainly find some very rare items available, even at low prices. A good example of this is, the Sonic cosmetics are currently flooding the player market, which means, a lot of players seem to be snapping them up for several hundred thousand meseta, which isn’t a lot at all. You may not always find exactly what you’re looking for, but there are always plenty of interesting options out there for the thrifty shopper.