The MMORPG genre has been stagnating for years, but it’s not for a lack of trying. To no avail, big-name studios have attempted to spin new iterations on the old formula and millions of dollars have been pumped into Kickstarter dreams. Even so, the most popular game in the genre is nearing two decades old while the second most popular, which has followed nearly the same formula, is closing in on its 10-year anniversary. With that in mind, I don’t think it’s the formula that’s the problem but instead that the medium itself hasn’t evolved. The future of the true ‘next generation’ MMORPGs needs to be in the VR space or things will likely not change.

With the flash in the pan success of New World and Lost Ark, it’s clear that audiences are desperate for a new flavor of MMORPG. They’re willing to try anything that comes along, and companies with enough marketing power behind them have proven it.

New World didn’t change much between its last few closed beta tests and official release, but that didn’t stop nearly a million people from buying it despite all of the red flags. Since its launch, only 3 percent of its initial population has stuck around.

Even though it hasn’t had as much time to settle, Lost Ark does seem to be holding a bit steadier, likely due to its prior launch and success in South Korea. Regardless, these are unprecedented active player counts for an MMORPG on release day, proving that a massive, untapped [or at least disenfranchised] market still exists.

While some players are constantly searching for the next best thing, other have turned their sights on the past: A simpler time where online games encouraged [forced] players to group up and interact with each other to overcome a common obstacle. I’ve personally fallen into this sentiment, “if only we had a visually updated version of Ultima Online or Old School RuneScape everything would be right with the world.” As much as I would like to think that’s true, it’s probably not the case. The archaic systems most of these games were built around vanished not because of an evil megacorp conspiracy, but instead because they either weren’t fun in the first place or people simply don’t have the time or patience now that more convenient systems have been created.

Unfortunately, millions of dollars and gallons of hope have been dumped into crowdfunded projects like Crowfall, Camelot Unchained, Chronicles of Elyria, and Shroud of the Avatar only to be let down, or even completely burned, time and time again. The only real success story so far is Albion Online, which has managed to cater to a very specific type of hardcore, sandbox MMORPG player base. Who knows, maybe the next Kickstarter MMORPG will actually get everything right, but they’re still not getting my $30. 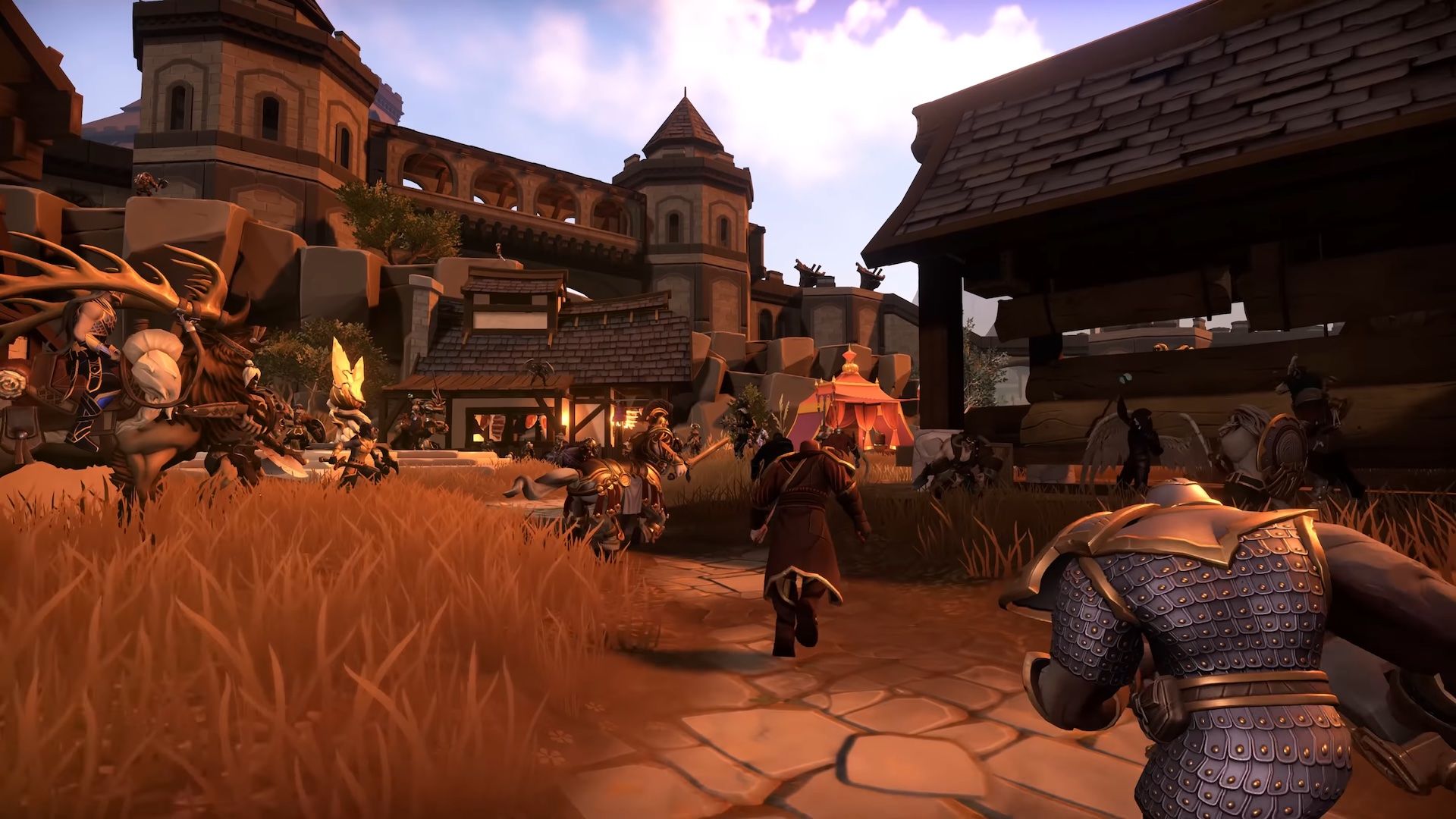 Eyes to the Future

Now that I’ve hopefully convinced you [did you really need convincing?] that the MMORPG genre needs a change and there’s a very real audience looking for something new, let’s get to the point of this article. The next generation of prominent MMORPGs need to at least be designed with VR in mind. Until that happens, World of Warcraft and Final Fantasy XIV will continue to reign supreme while the next three or four most popular games fight over the scraps.

After spending thousands of hours over the last 20 years, logging into nearly every MMORPG to spring to life, I simply don’t have the faith in any development studio that’s still around to change the formula enough to make an impact. If anything, World of Warcraft and Final Fantasy XIV have proven that formula is fine. At a high-level view, they're nearly the same game with a shifting popularity based on the preference of a given patch or expansion. The others [ESO, Guild Wars 2, Black Desert, RuneScape, Eve Online, The Old Republic etc.] have managed to shake things up to some degree but either cater to niche audiences, rely on strong IPs, or utilize gimmicks that don’t hold audiences’ attention for too long.

Therefore, it’s not the formula that’s the problem. If it was, people would have stopped playing MMORPGs 20 years ago. However, it’s the medium itself that has stagnated. PCs, and consoles to some degree, can only become so immersive. We aren’t any more a part of our characters as we were in EverQuest. Technology has improved, graphical fidelity is near lifelike, raids are more dynamic, but we’re still just a bunch of nerds sitting in front of a computer screen with a keyboard or controller in our hand.

My first interaction with a VR MMORPG was OrbusVR back in 2017. I had just finished watching Sword Art Online for the first time, purchased the original Oculus Rift, and was ready to jump into a VR world!

I may have set my expectations a bit too high. The game’s systems and movement was incredibly clunky, I could count the polygons on my enemies, and I got motion sickness after 30 minutes of playing. I kept pressing through, and while I came to realize OrbusVR was more of an experiment than anything, I did see the future potential and hoped that soon we would get a title truly worth investing in.

A little more than four years later and we’re finally at the next step. Earlier this year, a new VR MMORPG called Zenith: The Last City released on Steam, Oculus, and Quest 2. Despite its relatively small team, the developer [RamenVR] has put together a fully-functional VR MMORPG that is actually fun to play and explore.

Currently, the game is still a little barebones compared to existing PC MMORPGs, but it delivers a truly unique experience. The core game consists of grabbing a few quests, killing monsters, joining public dungeons, and then moving onto the next area. There are limited cooking and crafting systems, and world events regularly pop up, but the core formula is nothing we haven’t seen a dozen times before.

What is exciting, however, is being able to traverse the world in first-person while having complete control of your character. The satisfaction of moving your arms to swing your swords and fell your enemies is something that previously hasn’t existed. Instead of pressing a ton of hotkeys, skills and spells are used based on the movement of your actions. Instead of memorizing rotations, it’s about reacting to the situation and learning muscle memory to attack efficiently.

In addition to combat becoming more involved, exploration becomes rewarding again. Zenith itself might not be the prettiest game on the market, but there are still some cool areas to uncover, and seeing them in first-person VR is nothing like staring a static screen. Finally, Zenith has also implemented hovering, which requires control using both arms simultaneously similar to an Iron Man suit. It’s a little clunky at first but beats the heck out of using a flying mount.

Finally, there’s the social aspect that I think so many of us have been missing. Without having to type, it’s so much easier to interact with fellow players. Simply walk up to them and start talking and/or gesturing. This makes it much easier to communicate during dungeons and public events, or simply asking for help with difficult quest mobs. If you don’t want to talk to strangers, you can still mute them or turn on ‘Guild Only’ chat.

Where we can go

As much as I’ve enjoyed Zenith lately, I hope that it’s just a speed bump in the progress of much more complex VR MMORPGs. The technology is improving, costs are coming down, and headsets are finally becoming portable. Both software and hardware is being designed to reduce motion sickness while headset prices are no longer astronomical and don’t have to be tethered to a PC.

The next step needs to be done by an AAA studio. I can only imagine what it would be like to physically walk down the streets of Ul'dah, haggling with merchants or drinking a pint of ale at The Quicksand. The proof of concept is out there; it can become a reality. It’s just a waiting game for a studio with the development talent and bankroll to realize it.