We finally got a glimpse of Bethesda Game Studios’ Starfield during the Xbox Bethesda showcase last Sunday. However, despite Todd Howard’s song and dance, the upcoming space RPG looks decidedly last-gen. And that’s simply not good enough.

To Bethesda’s credit, what the studio showed us was indeed gameplay and not some CGI trailerfication as has been custom for virtually all previous Xbox showcases. Furthermore, I appreciated how Todd Howard’s narration provided context to the footage. Too often, we’re presented with gameplay with no story to take us through what we’re seeing. And that makes it difficult for the viewer to care. Overall, Starfield’s actual presentation was great. It was concise information presented with Bethesda’s statement of intent for their RPG.

But that’s pretty much where my positive affirmations end. With the usual, almost worthless “early game build” caveat out of the way, I was not impressed by the visuals and tech on display.

Despite Bethesda’s previous claims, Starfield harnesses, “the power of next-gen technology,” and is, “built on the all-new Creation Engine 2,” what we saw was anything but next-gen nor all-new.

To understand what I mean, it’s perhaps best to look at the work of other studios. Despite CD Projekt Red’s Cyberpunk 2077’s broken launch state, what cannot be questioned is the extent to which the studio continues to push the bleeding edge. With each game, CDPR gives us an entirely new technical presentation. The graphical leaps from Witcher 1 to Witcher 2 alone were outstanding. Witcher 2 was so ahead of its time that it still holds up incredibly well today. Dat depth of field, my god… 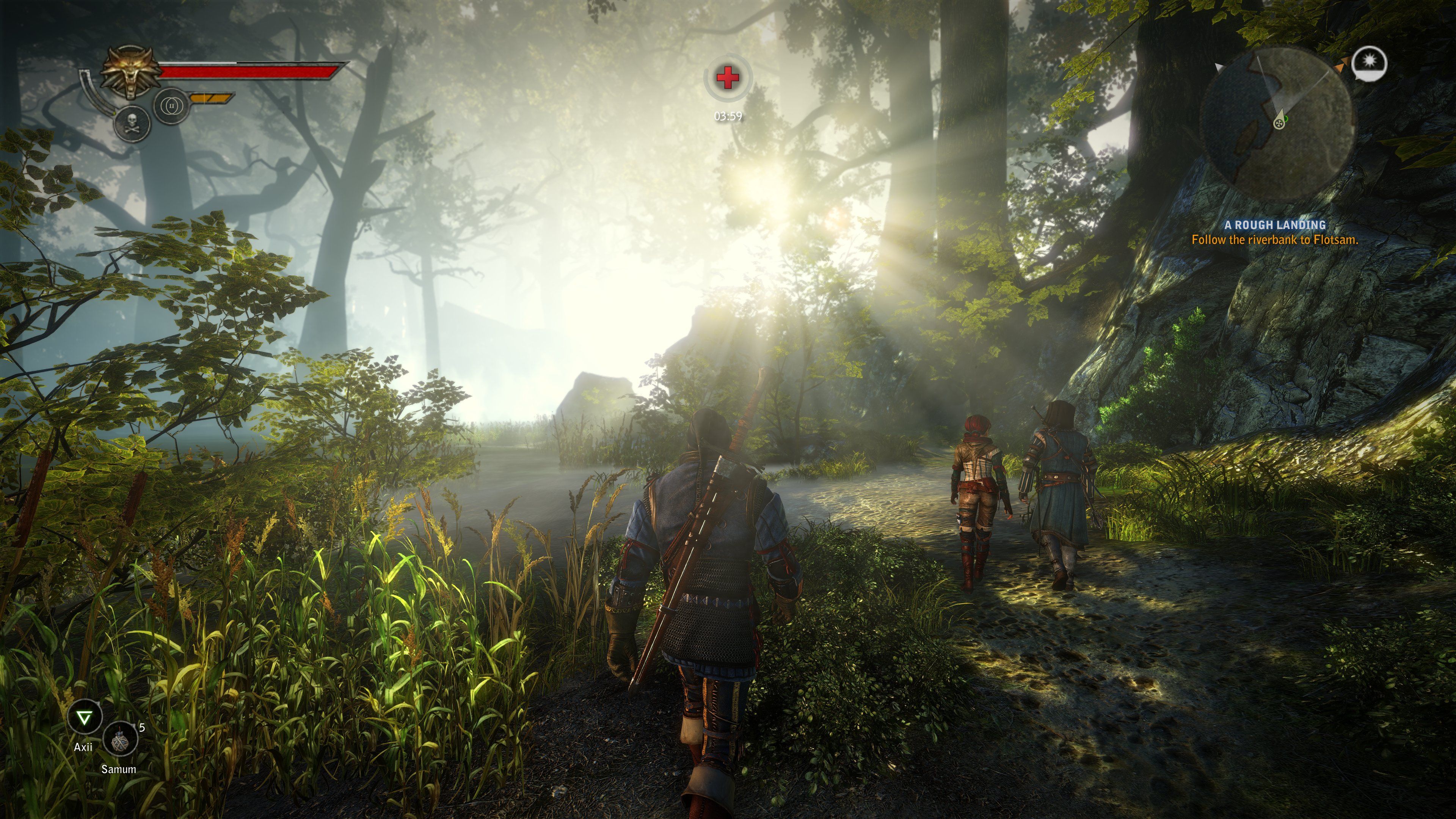 Those leaps were seen again from Witcher 3 to Cyberpunk 2077. While CDPR had a simple implementation of physically-based materials in Witcher 3, this was taken to new heights five years later with Cyberpunk 2077. Furthermore, CDPR fully embraced then-next generation technology with the most robust implementation of ray tracing to exist in games. To this day, two and half years after launch, there is no better example of real-time ray tracing in games.

CDPR makes a conscious effort to effectively overhaul their engine and approach each new game holistically with the deliberate aim of creating a different experience, one which builds upon the previous game and embraces the bleeding edge technology of the day.

This is not what Bethesda does. When developing Fallout 76, the team still found code from the Morrowind days. For example, that translated directly into visuals in the stiff animation and character models. When looking at Starfield, this same throughline was blatantly apparent to me.

Let’s start with performance. It was clear the demo ran at an unstable 30fps, often dipping below. With other games, you can expect such performance issues to be cleared up by launch. But this is Bethesda. They have a proven history of releasing broken games on both console and PC. Remember Skyrim on PS3? Or Fallout 4 on console? Or…literally all of Fallout 76? I’m under no illusions these performance issues will be cleared up by release.

Particles, like the dust kicked up by your ship, were very low resolution. We’ve seen good particles before in wide open dynamic games. Hell, 2011’s Battlefield 3 on PC has far superior particles than 2023’s Starfield. 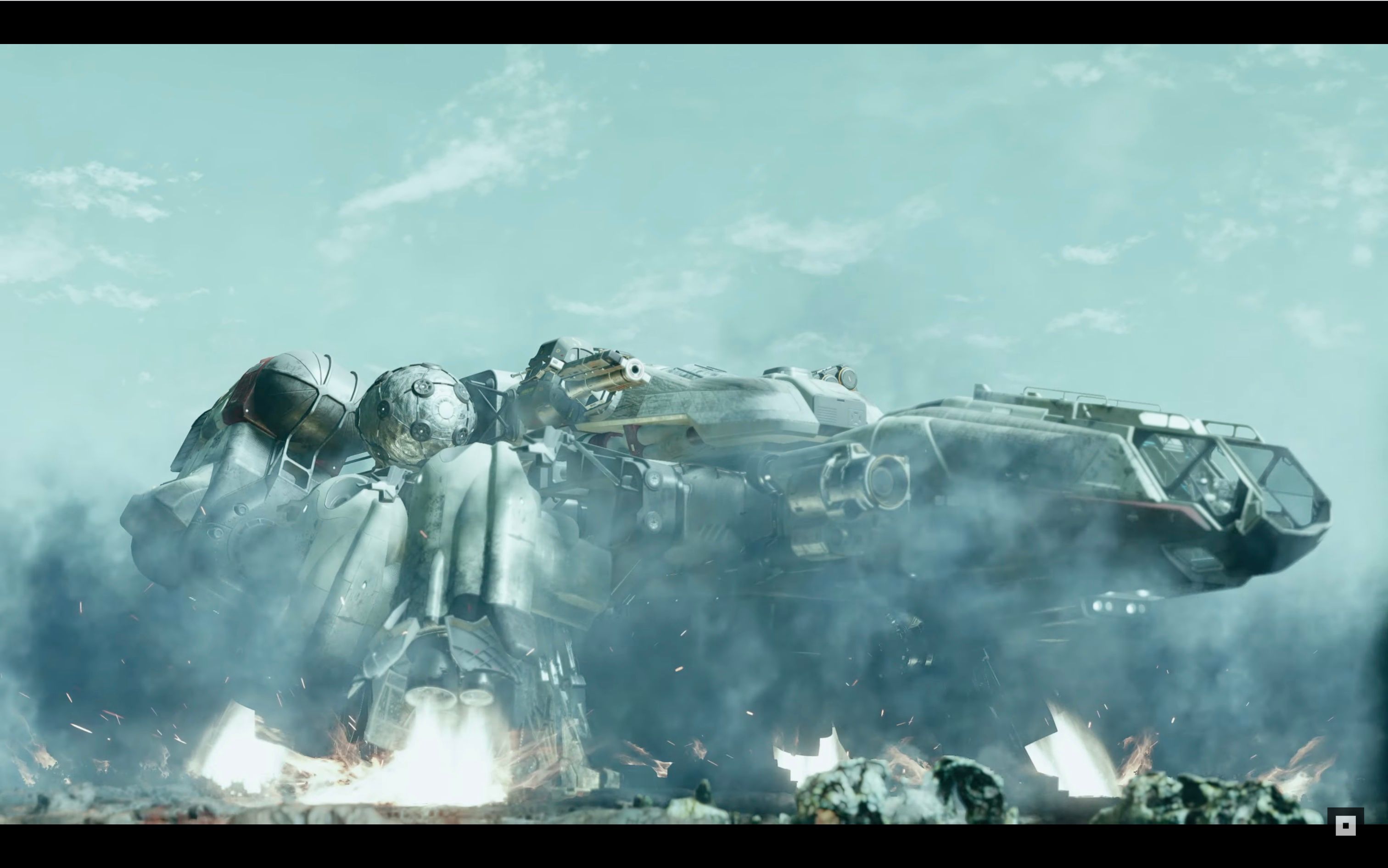 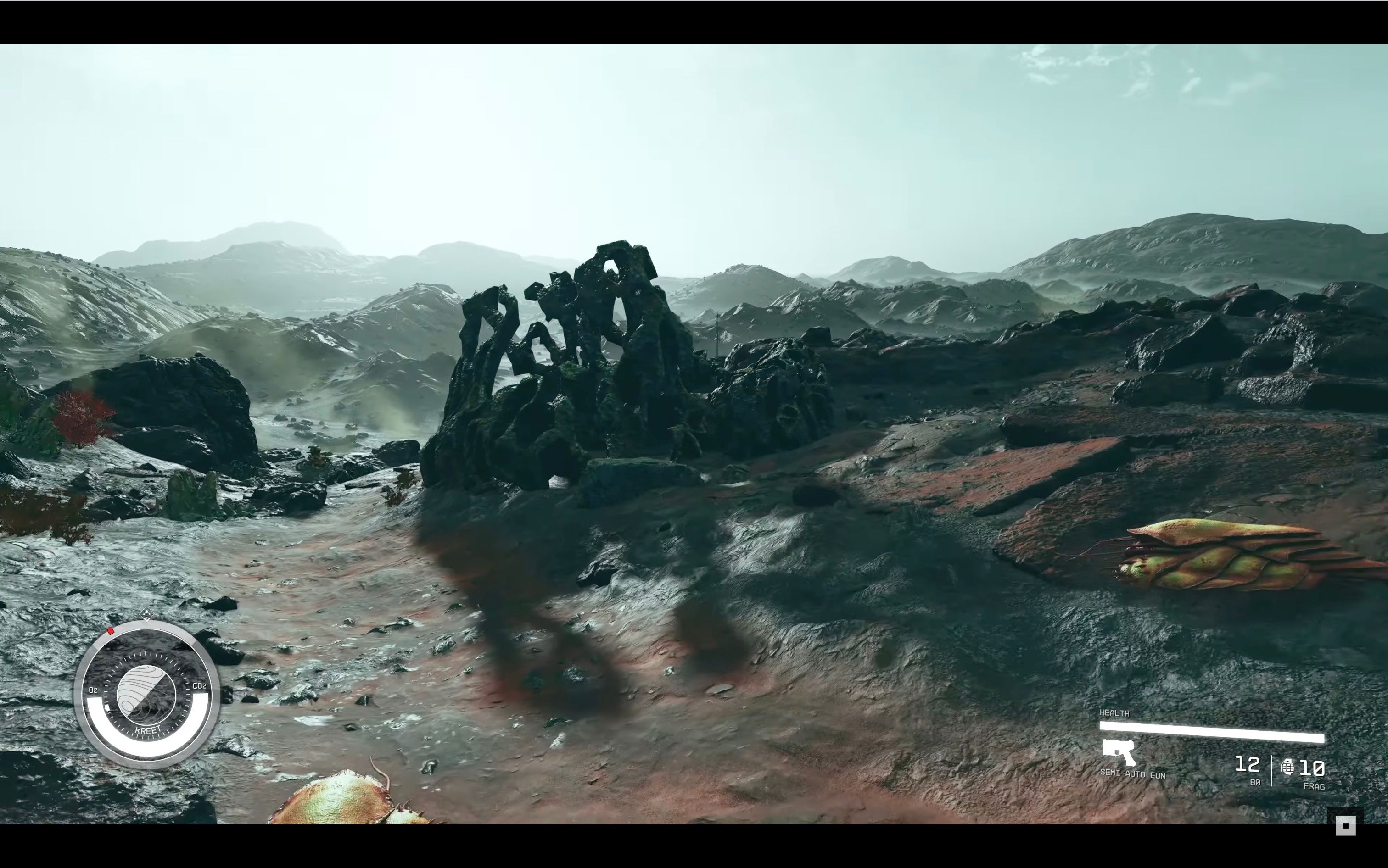 Moving to the interior, we then saw a sub-30fps action sequence. As a quick aside, internal spaces are generally less taxing to render than exterior spaces simply because interiors are more contained. Usually, there’s less “stuff” going on. But even here, indoors, Bethesda’s so-called “all-new Creation Engine 2” struggled to maintain 30fps. Again, insert “early build” caveat here. But I’ll point you to my examples of persistent performance issues just a few paragraphs prior.

During this action sequence, I noticed a distinct lack of any real reflections. This was puzzling because there were plenty of reflective surfaces in the scene. But not even SSR (screen-space reflections), a last-generation technique used in the Xbox One/PS4 era, appeared to have been used. 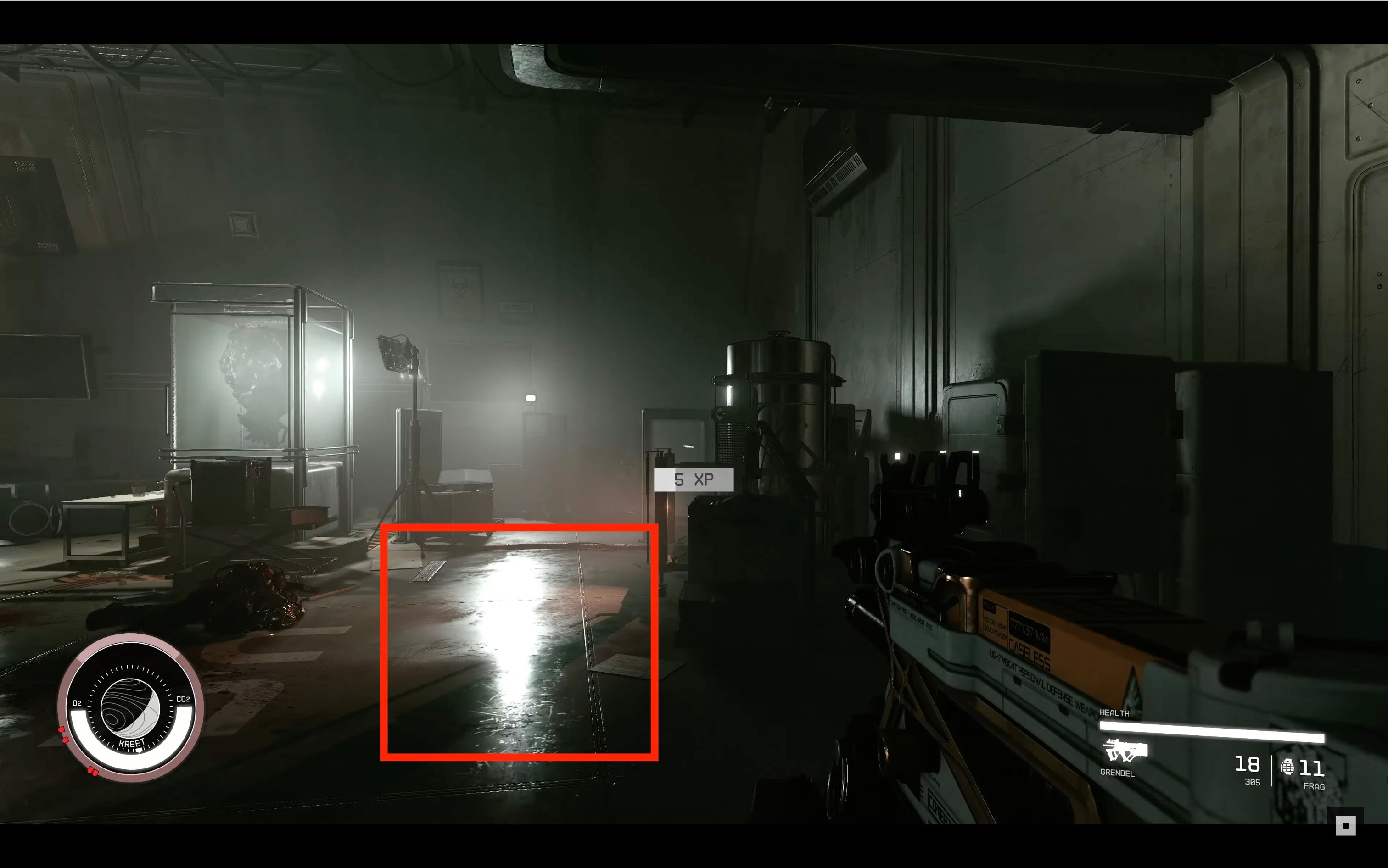 The frustrating part here is we, as an industry, have moved so far beyond low-resolution shadows and cubemap reflections. In just the last four years, real-time rendering has leapt ahead to embrace ray tracing for global illumination, ambient occlusion, shadows, and reflections.

Furthermore, the current Xbox consoles, the Series X and Series S, have the hardware to support such techniques. But Bethesda’s Creation Engine 2 doesn’t appear to leverage that hardware. So despite Bethesda’s claim Starfield harnesses “the power of next-gen technology” and is, “built on the all-new Creation Engine 2,” the game on display proves the opposite.

In fact, it’s worse. It doesn’t even harness techniques pioneered in the last generation (Xbox One/PS4) like SSR, instead relying on cubemaps -- something we saw during the PS360 days.

The nail in the coffin for me, however, was the character models. I cannot believe these same dead-eyed NPCs will persist in a game releasing in 2023. It is genuinely staggering. We have made tremendous leaps in character rendering in the years since Bethesda’s last game, Fallout 76.

Just look at this side-by-side comparison featuring a character in another open-world game, Guerilla’s Horizon Forbidden West. Immediately, several differences stand out. The skin shading alone on Aloy is much richer than the character on the right. Additionally, Starfield’s NPC appears to lack any subsurface scattering (SSS). SSS is vital in providing that depth to skin. Without it, the NPCs’ skin appears clay-like. SSS is not new, by the way. This is yet another last-generation technique Bethesda hasn’t implemented. 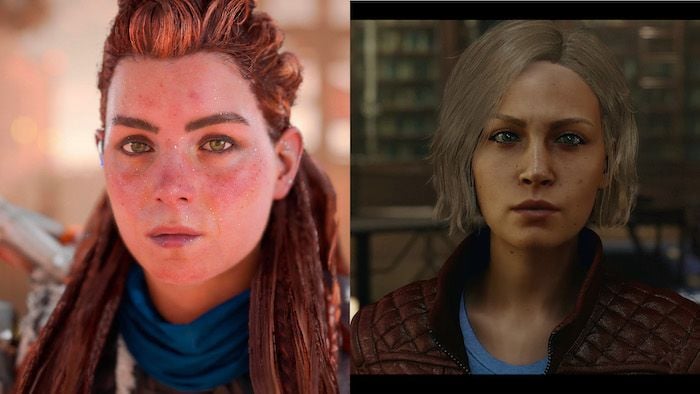 Finally, Aloy’s eyes are richly detailed with subtle iris parallax giving them that three-dimensional appearance. Note how the subtlest squint of her bottom eyelid adds distinct intensity in her stare. Her eyes are alive. Her face is a single interconnected entity. You can tell she’s looking at you. Starfield’s NPC, meanwhile, lacks any obvious shading and detail. There’s no life there, no obvious connection between her eyelids and her actual eyeball. They’re separate objects. She’s looking through you.

All this is to say nothing about the fact Starfield will not feature seamless transitions between planetary and space gameplay. This was deemed, “really just not that important to the player.” I don’t know about you, but in a game marketed on discovery and immersion, the omission of such a seamless transition shatters that illusion. This is especially damning when No Man’s Sky solved this engineering problem in 2016 with a much (much) smaller team.

What, then, is so “next gen” about Starfield? The answer appears to be “nothing.” Bethesda’s Creation Engine 2 is aging. Scratch that. It was already aged seven years ago when Fallout 4 released the same year as Witcher 3. From what we’ve seen, Starfield leverages zero modern rendering techniques embraced by other (and smaller) game studios.

For a game positioned by Xbox leadership as their platform's obvious flagship game and system seller, it simply doesn’t look the part. And that is a problem. Your flagship game should astound with next-generation visuals. Look at virtually every Sony first-party title. They’re almost all technical showstoppers, true showcases of the PS5 hardware.

While many people will no doubt point to gameplay as the be-all-end-all, that’s simply irrelevant to my point. Gameplay will be gameplay. Starfield was always going to play like a Bethesda game. I never once doubted this.

But technology matters. Graphics matter. While Starfield was always going to play like a Bethesda game, for one glorious moment, there was a chance it wouldn’t look like a Bethesda game. Despite releasing on the “world’s most powerful console,” Starfield appears to be yet another technically handicapped title from Bethesda. And for a game themed around pushing humanity’s limits, what an irony indeed that it’s too timid and incapable of even trying.