Now that Bezos has pulled the old bait-and-switch on Blizzard to force a rushed release of 9.1 before New World dropped, it’s probably a good time to talk about the game’s extra time in the oven now that its loaf has well and truly begun to bake.

For all its flaws (and boy are there plenty), my Mum would say “it’s got good bones”. To anyone that’s not my Mum, they’d just say it’s shaping up nicely.While there’s plenty of obvious stuff to talk about, from its fairly snazzy combat to its gorgeous engine, or the fact that gathering isn’t actually a ballache, it does a few niche things well that I’m not seeing much chatter on.If there’s one thing in MMOs that drives me to distraction, it’s a lack of default options and a need to plug gaps left by poor design. I shouldn’t have to mod my client up to its eyeballs to make it functional or accessible: I want it working out of the box.New World starts off on the right foot here. Not perfect, but a good step forward in becoming a genre benchmark. Clear telegraphs, solid scrolling combat text, recognisable buffs and debuffs, default bag filing and a “drop all” option, chat channel settings that are flexible and a minimal UI that’s unobtrusive.

I think it’s the first MMO I’ve played in years where I haven’t jumped to Google within seconds, searching for modding intervention on what the game has burdened me with. Not feeling the need to mod an MMO to World of Warcraft levels is such a relief, that I spent my opening minutes actually playing the game, rather than wondering how the hell you split a stack of radishes or how to send money to that one guild member who’s always skint. 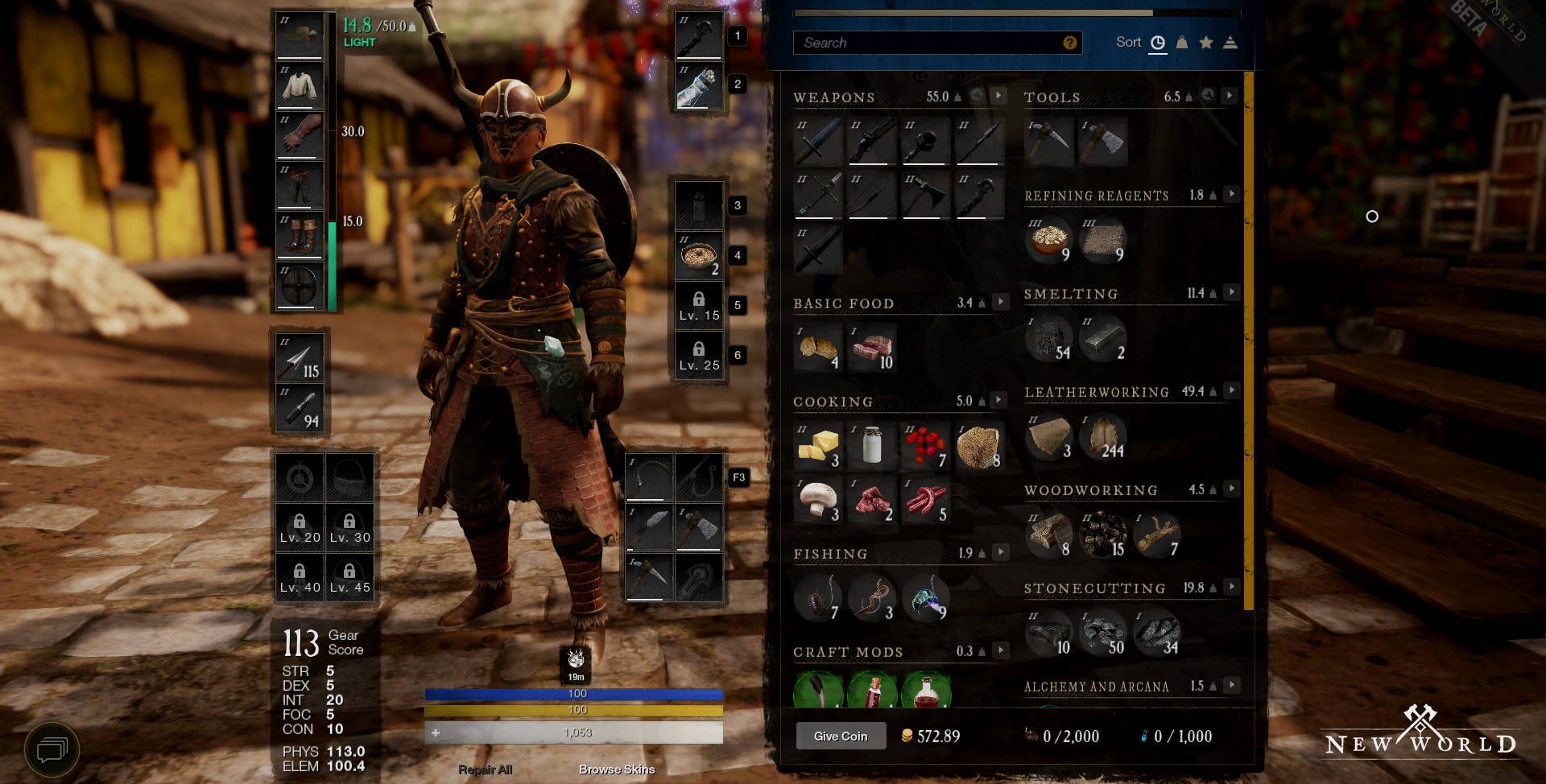 Perhaps I’m too easily pleased, or the genre over the last 25 years has brow-beaten me into being grateful for even the slightest sight of sensible design, but it just feels good, you know? The UI in New World makes you think it’s been made by those who actually play MMOs, with MMO players in mind.

I’ve no doubt there will be those who wish the game had a more traditional layout, or the option to customise everything within an inch of its life, but as it stands I’d be happy to invest significant time into the game without feeling aggrieved that such customisation isn’t possible. Maybe it’ll come in the future, but I’m oddly content to finally go default, without the horror of constantly keeping my UI updated.  That brings me nicely onto character customisation and its inclusivity. It might be irrelevant to some (a big thing to many, I suspect), but removing restrictions between sexes is long overdue in the genre. Call me woke, tell me you don’t give a shit about it–that’s fine. But surely we’re reaching the point where there’s no need to segregate such choices any longer. It's so refreshing to have diverse human beings to choose from, with a shared pool of options across broad-stroke forms. Christ, it took WoW long enough just to implement a diverse array of hairstyles and skin colours.

New World could have taken this much further, and I think there’s still too few options when it comes to body shapes and character customisation, but it’s a step in the right direction. It makes me wonder why it's taken this long to shed such arbitrary limitations (even FFXIV eventually saw the light on its bunny boys).

Such an approach to inclusivity even extends to New World’s accessibility. From its colourblind options (which still isn’t an industry standard), text-to-speech, speech-to-text and its proximity chat, it’s all designed to just make life easier for those who need it. It doesn’t matter if you won’t use the options–you might not have even looked at the tab–but to someone out there it will make an enormous difference to their online experience.

If New World is going to attract as broad an audience as possible, it not only needs to grab the attention of those deeply ingrained in their MMO of choice, but also welcome those put off at the prospect of needing to mod their clients, while handling confusing menus and a bloated UI. If you can also create a character that truly reflects who you are, even better. I’ve plenty of friends in all of these camps, and New World is the first MMO to come along in a long time that has caught their eye precisely because it dismantles barriers that have been in place for far too long.

Amazon Game Studios have clearly done the leg work to open its doors to a whole new generation of players. And let’s be honest: there are millions out there who’ve never dived into an MMO. What better place to start than one that clearly places accessibility and inclusivity at its core?