I’ve been a fan of The Lord of the Rings Online for over a decade. It was the first MMO I was willing to pay a subscription to access because the world of Middle-earth is rich, beautiful and one of the most precious (Gollum fully activated here) sub-creations to me.

LotRO players can be some of the most forgiving players in any fandom. However, since July, The Lord of the Rings Online has seen some of the worst instability in server performance than I can remember. From being completely offline for some servers at one point for days (Arkenstone players like myself are still a little bitter), to general instability tied to issues outside of SSG’s control at their data center, LotRO isn’t exactly in a great spot right now.

Couple that with the fact that the team still hasn’t been as transparent as some fans would want as to what caused the issues and how the LotRO team is taking steps to ensure minimal service interruption in the future. As a result,  the announcement of a mini-expansion just feels ill-timed.

However, the cost of the mini-expansion is sticking with me the most.

Normally, VIP and Lifetime players get content updates (other than expansion packs) as part of their sub. It’s one of the perks for continuing to pay a sub in a free-to-play game. Quest packs are included with your sub, while F2P players have always needed to purchase the quest pack on the in-game store. This time, though, that isn’t the case.

This time around, The Lord of the Rings Online team is releasing this quest pack as a “mini-expansion” and charging a minimum of $20 to access it. Notice how I said “minimum.” This mini-expansion, as we reported last Friday, will also have a $59 version and a $99 version. 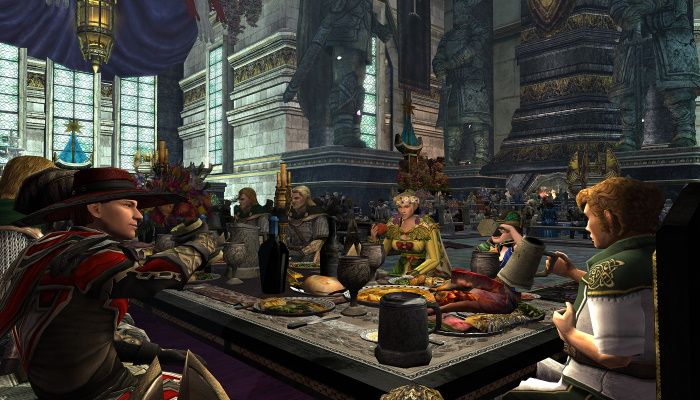 The exact details of the expansion are still a bit scant. We do know it won’t be replacing the Gundabad-themed expansion in 2021, nor will there be a level cap increase. There will be new boar mounts, as well as a new raid with raid gear. But that’s about it. We don’t really know what the $60 Collector’s Edition or $99 Ultimate Edition provides.

I feel like the LotRO team really made a misstep here. The timing of this - the fact that it feels like a normal quest pack will be charged to even the VIP players who have supported this game through the years - coupled with the fact that it won’t even be available in LotRO Points at first for those Premium players who hoard points just for this very purpose feels as though SSG is not really reading the room here.

After weeks upon weeks of instability and poor server performance, a $99 version of a “mini-expansion” just feels tone deaf. The Lord of the Rings Online gave a lot of goodwill to the community during the pandemic by providing a large majority of its content free to claim for players until the end of August. The cost of the Ultimate Edition of the mini-expansion would be high even for a normal expansion. LotRO has a history of charging over $100 for these normal expansions when the only differences are cosmetics and, in recent years, a new race to differentiate it from the cheaper editions.

Years later, it’s fantastic that my favorite MMO is still seeing continually added content. After 13 years, many MMOs are either in maintenance mode or have completely sunset. LotRO is still around and trucking along. Recent content additions, like the Great Wedding, make coming back to the game a treat. But at some point, there is a line where that goodwill starts to wear. That wearing of goodwill  started with the weeklong period this summer where many players could just not log on. The pricing of this mini-expansion seems to also be another spot where that goodwill is thinning out.

In the Lord of the Rings Online subreddit, some players are upset that it looks like quest packs that would normally be part of the VIP sub are being portioned out to the mini-expansion format just to get an extra $20 from current paying customers. Other players are noting the timing, expressing their disappointment that this comes right after all the server problems plaguing SSG right now.

Standing Stone Games is sort of in a no-win situation as well. There might be pressure from Daybreak causing the need to monetize further the quest pack and raid other than the format that’s worked for years. But a mini-expansion priced at $99 just feels like the team is nickel and diming their loyal fanbase. Hopefully, once more details are released about exactly what War of the Three Peaks truly contains it might soften the blow. For example, is it just a quest pack and a new raid? Is there more to it or new features that would make players excited to pay in order to experience the story content?

Personally, $20 doesn’t seem like a bad price for DLC, though I really wished they would make it available to purchase with LotRO Points from the get-go. It remains to be seen how the two higher priced versions differentiate themselves from the base mini-expansion. I also hope that LotRO’s team hears the complaints from the community and learns from this. Were people really clamoring for a $99 version of a quest pack?

With a full expansion, a Collector’s and Ultimate Edition makes sense – it’s the way of the games industry in 2020. But with a mini-expansion, which in some players’ minds is nothing more than another name for their normal quest pack release, it just feels greedy. Standing Stone Games needs to do a better job of explaining what makes this pack different than their normal updates and why someone should feel they need to spend $20 on the DLC - let alone $99.

The Lord of the Rings Online has done a ton this year to help players access their game without worrying about cost. The pandemic quest pack giveaway was genuinely one of the best bits of news in the MMO world this year. However, that goodwill only goes so far and, right now, it seems to have stopped short with this news. Hopefully SSG and the team behind LotRO are listening.