Game Freak’s record-breaking monster collecting RPGs offers a simple enough premise; you set out from a small town with a big dream, befriend people and Pokémon along the way, and hone your skills enough to thwart evil organizations and climb the ranks to stardom. Almost 25 years later, it’s proven impossible to beat. Clones and copycats have come and gone, and like Mickey Mouse or Hello Kitty, Pikachu and pals have become iconic, recognizable faces across the world. Yet as the gaming world turns to service games and pseudo-MMOs, it’s hard to deny that the franchise’s reluctance to embrace the world it instilled in our imaginations isn’t a wasted opportunity.

Pokémon’s exaggerated take on real-world animals, insects, and typically inanimate objects made millions of kids see the world through its creator’s eyes - a place full of weird and wonderful creatures we take for granted or flat-out ignore. A Pokémon MMO, a chance to properly share that experience with others, has always seemed like the next logical step for the franchise. Decades later, fans are growing increasingly impatient. If screams across social media can't convince Game Freak to try something radically different, maybe a major competitor can convince the younger generation into wanting more, too. And they’re out there. Growing, maturing, and embracing the technology and trends needed to satisfy the aging Pokémon player yearning for something bigger.

Perfectly timed to take advantage of the divisive Dexit tirade, Korean developers Pearl Abyss announced DokeV, a colourful monster battler clearly taking cues from games like Pokémon, Yokai Watch, and even Splatoon, at its own Pearl Abyss Connect show late last year. Sticking to its Korean roots -- where online strategy and grindy adventure games dominate -- it swaps out the usual single-player focus of the genre for a massively-multiplayer open world. It’s an MMORPG. Cool clothes, cuddly critters, and a world of adventure on your doorstep all point toward an experience that’s out to catch the attention of the Pokémon fanatic who has longed for a shared experience in the face of the service game boom.

Pokémon arguably resonates with players because of its grounded approach to reality. The idea that these friendly creatures are all around helps us to appreciate the world outside our own four walls. This want to reinvigorate a sense of wonder into our everyday surroundings even fuels Yokai Watch, which reintroduced classic folklore to a new generation of kids by dropping kappas and ghost cats onto the streets of a modern Japanese town.

Back in the GameBoy days, using your imagination to fill in the blanks of the Pokémon world was technologically mandatory. You try making sense of the back of a Venusaur in Pokémon Blue. It’s a mess. By today’s standards, its worlds feel small, leaving Game Freak’s idea of a grand adventure looking like a hollow promise. After building itself around the idea of trading with friends, the franchise has struggled to embrace new multiplayer tech, even going so far as to omit local multiplayer from its traditional Battle Tower mode in the recent release of Pokémon Sword & Shield. Though the “Wild Area”, which allows players to populate a fraction of the map and team up to fight bigger creatures, seems like a testing ground for a true Pokémon MMO, Game Freak’s flip-flopping on multiplayer features over the years doesn’t instill much hope for the future. At this point, there’s genuine concern that any potential MMO they do put out wouldn’t meet the expectations of the masses.

During the big reveal, DokeV lead producer Sang Young Kim described his game’s creatures as “good friends, each with their quirks and brimming with personality.” When you consider the bright color and big smile of the instantly recognizable Pikachu, it sounds as if the upcoming title already has a good grasp of what made its closest competitor so alluring in the first place. These creatures are like your average wacky cat or lazy dog: their eccentric, oddball behavior giving us endless reasons to love them. DokeV’s aren’t quite on that level right now, but the brimming world it paints in its announcement trailer already signals a sense of in-game community that far exceeds what Game Freak has managed to produce over the years.

Part of it appears to be the influence of Nintendo’s Splatoon, a vibrant shoot em’ up that made a name for itself through robust character customization and a sense of individuality and self-expression. Though it centers around a weird breed of squid kids, the plethora of clothing styles available to players bolsters the idea that these on-screen adventures are our own and not that of a predetermined protagonist. Pokémon embraced customization with its last two entries with cute clothes, but its lack of a meaningful player hub makes it difficult to properly appreciate with others. The DokeV trailer made a conscious effort to highlight picking up a sweet new outfit at the boutique before running (or driving) through town and into battle, so don’t expect those shopping trips to be for your eyes only.

The trailer didn't show any real gameplay. Even half-way through 2020, there’s been no update on the game’s progress. But what it showed back then was enough to set the scene: a bunch of fashion-conscious kids grab their larger than life pets, run around town, and stop at a power plant to battle a problematic cone creature. It demonstrated a clear understanding of what makes the monster collecting RPG genre so open to growth. We're led to believe we can roam dense, character-filled streets, meet up with our friends, and play hero together. It’s exactly what Pokémon fans have longed for since the start, and something the recent release of Spanish developer Crema’s Temtem has already attempted to realize earlier this year.

There’s less of a focus on competitive balance there while Crema focuses on delivering the full campaign and the rest of its explorable world, but with players journeying together and infinite housing recently added, it’s already scratching the ever-growing itch for a creature collecting MMO more than Game Freak has in decades. If Game Freak won’t satisfy our desire for a fully-realized Pokémon MMO, why wouldn’t we give Pearl Abyss and Crema the chance to fulfil our dreams for adventure instead? Pearl Abyss has years of experience developing innovative MMO experiences and these games foster a sense of friendly competition, so it’s only fair to let the fight commence. 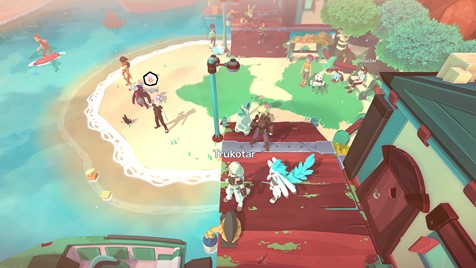 Decades of battle between Microsoft and Apple catapulted the computer into every home, and AMD’s current cruising over Intel in the budget CPU market has made the silicon leader finally make its competing chips cheaper for the end-user. If that can happen between billion-dollar tech giants, it isn’t hard to imagine a bit of banter between those in the monster collecting market resulting in a better product.

Originally designed for mobile, DokeV is now targeting a PC and console release, but its developers remain open to a handheld version in the future. Without any real hardware barriers blocking curious onlookers from trying it out, DokeV opens itself up to an audience not all too dissimilar to those who jumped on the Pokémon Go bandwagon with absolutely no prior knowledge of the franchise: something that very likely contributed to Pokémon Sword & Shield’s own record-breaking sales.

There’s every chance the ongoing pandemic has slowed progress on Pearl Abyss’ ambitious new IP, though. With no word of a 2020 Connect event taking place this year, it’s anyone’s guess as to when we’ll see what DokeV will really bring to the battlefield. And while Temtem enjoyed a busy launch period, being PC-only likely stifled its chance to shine. There’s a PS5 version on the way, but moving from one niche platform to one with an install base that will be dwarfed by the previous generation for years to come likely isn’t going to change its fortunes too much.

The MMO boom of the mid-00s may have been too early to pressure Game Freak into taking the plunge, but the rise of service games like Destiny 2 and Avengers could see DokeV succeed outside of its home country by leveraging the power of popular streaming platforms like Twitch and Mixer.

The world loves to watch pro gamers demonstrate their skills on personal livestreams. When they’re not climbing the ladders, many hop onto another popular game to keep the entertainment going. If DokeV becomes that go-to substitute when it launches in Korea, it could introduce hundreds of thousands of eyes to its potential in a flash, creating a storm that really could threaten to steal the spotlight from Pokémon. YouTube creators were paramount in spreading Minecraft around the globe, after all. There’s no saying its lasting appeal will knock Pokémon from its well-deserved pedestal, but its hypothetical popularity could convince Game Freak to take drastic action to avoid appearing old-school and out of touch.

Mobile MMOs are the norm now, and with titles like Warframe and Fortnite being ported over to Nintendo's latest handheld, there's reason to believe Game Freak can manage these shared online experiences with Pokémon, too. A version of the popular creature collecting series that isn’t just a single-player adventure with multiplayer menus tacked on to tick a box. The mere existence of DokeV won't be enough to push Game Freak into venturing out of their comfort zone, but its potential surge in popularity through today's modern gaming habits might just corner them into turning a bold new leaf.