Amazon and Leyou canceling their upcoming Lord of the Rings MMORPG is unsurprising, but it is a bit depressing. However, it does make me wonder what could have been, from both a pure MMO standpoint and as a die-hard Lord of the Rings fan.

Amazon’s history with game development hasn’t been the best. Both Breakaway and Crucible met swift ends and the studio hasn’t successfully released a game yet. Their upcoming MMO, New World, has a lot to prove, and the fact that it continually gets delayed - while not always a bad thing - does leave many, including myself, to question whether Amazon can successfully release a game at this point.

The Lord of the Rings MMO in the works with China-based Leyou was intriguing, especially when you consider that Amazon has the rights to create the incredibly expensive TV show it’s currently working on. While the company said in 2019 that the game is unrelated to the show it was creating, it does however make me speculate as to what we could have seen based on what we know about the show.

As a gamer, one of the worlds that has inspired my imagination is Middle-earth. I’ve loved romping through The Lord of the Rings Online for the almost 14 years its been out (it celebrates that 14 years on April 24th). I’ve enjoyed my time in Standing Stone Games’ expression of Middle-earth, however, I was excited at the prospect of something new, and more importantly, modern.

The idea (and this is really speculation at this point) of an open-world MMO set in the Lord of the Rings using a modern engine like Amazon’s modified version of Cryengine, Lumberjack, made me excited for what could happen. Seeing Moria anew, traveling to the Pelennor Field and watching the White Tower of Ecthelion rise above the plain - but in a modern engine using modern rendering techniques (Maybe even a little ray-tracing?) was something I was looking forward to potentially happening.

Beyond that, since it seems that Amazon has the rights to some of the material that happened in The Silmarillion (the TV show takes place in the Second Age and references the fall of Númenor), I would have loved to have seen the isle of Westernesse and the powerful Ship-lore of the Númenoreans. Or maybe even going back a bit further? Beleriand, mayhaps? 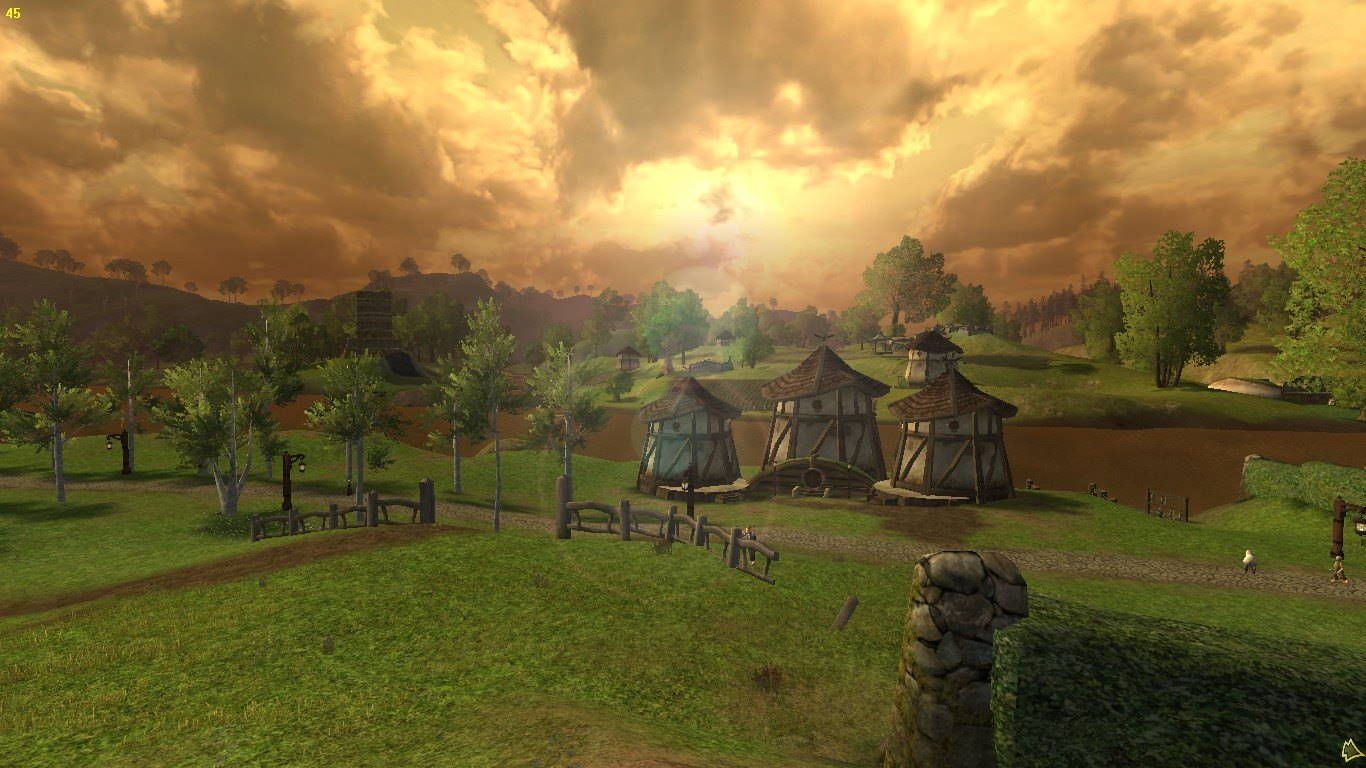 The Shire in LOTRO, but I would have loved to see it with Amazon's game engine.

Setting aside the graphical upgrade a modern engine might bring, could Amazon and Leyou have built an experience that did something different? Could the team have been working on something that creates a different experience from the traditional theme-park MMOs we’ve been playing for years? Was it going to be a traditional tab-targeting game, or something that leans more into the action combat seen in a game like Black Desert? Maybe something in the middle like The Elder Scrolls Online? Or was it completely new and (potentially) different enough to set it apart from the others?

It was made known last November that the MMO the two companies were working on was on track to have a playable prototype ready by June of this year. What was in that potential prototype? Will Amazon be willing to salvage some of the ideas for a future MMO, or will this LotR MMO return from the Uttermost West to see another day down the road? Time will tell.

It makes me wonder too what Standing Stone Games feels about all of this. While the studio told me in an interview last year that they were looking forward to playing the Amazon-made LOTR-based MMO, the news might have made a few people sigh of relief. The recent announcement of Daybreak being purchased by Enad Global 7 back in December of 2020 pulled the veil back on the fact that they could be targeting a graphical overhaul in a few years, a move I wondered at the time was due to the fact another LotR MMO was coming on the scene with a modern engine. With this MMO now canceled, what does that mean for LOTRO?

It stands to reason not much will really change for LotRO since we really didn’t know much about what Amazon was building thus far. We never saw screenshots or in-progress development updates, or even where in Middle-earth’s history the game was going to be set. Would we see the team tread the same ground of the Third Age that Lord of the Rings Online has dominated and built so well over the last 14 years? Were we going to see other time periods as I mentioned before? And if it’s the latter, how would that drive LotRO to continue to provide something compelling when Amazon was providing something new?

We also still don't actually know what about the negotiations caused the two companies to stop development on the MMO. Which company called it off? Was Tencent looking at the history of Amazon Game Studios and decide this wasn't a fit once they took over Leyou? This will likely never make the light of day, but it's interesting to speculate, especially if there is any hope of the IP and MMO being revived down the line.

There’s also the disappointment that another MMO is canned before it really had the chance to be something. It was gearing up to be an exciting time to be an MMO fan again - with  Elyon and Swords of Legends Online starting to heat things up for 2021, as well as Riot announcing its MMO is in the works set in the League of Legends universe, the prospect of Amazon finally releasing New World and then the LOTR MMO taking center stage made things exciting for the genre. This excitement is set in the backdrop of all the recent issues with crowdfunded MMOs canceling, going through leadership changes without so much as a peep from the developers about it, or simply seemingly in development hell for years.

There was nothing guaranteeing that the LotR MMO would even be good. In fact, Amazon’s game development history was working against it there. However, it would have been interesting to see what it could have been instead of the MMO being canceled before it even really got started.