The joy of the Total War: Warhammer II series is the fanservice that Creative Assembly have been able to bring to their strategy and tactical systems.  Some of the most ardent fan energy I’ve seen in an IP centers on the Greenskins in the Warhammer universe, both fantasy and 40k.  Honestly, I never understood it – they were silly and fighty, sure, but orcs are orcs.  Well, I can say with some certainty that getting to live Grom the Paunch’s quest for vengeance has changed my mind.  I’m still firmly on team Vampire Counts, but dem green gitz is growin’ on me.  I’ll elaborate momentarily.

I always like to look at the new visuals and audio when I play, to really indulge in the sensory experiences in which developers couch their world.  Of course, most of The Warlord and the Paunch is the same as pre-DLC Total War: WARHAMMER II.  What differences do exist are in new models, which generally look great, and new screens for special mechanics, which look slick.  I spent most of my time embodying ‘is immensity, Grom the Paunch, so I had a good treatment of the new Greenskin units and feel, and I can say that Grom’s model is spectacular.  Eltharion looks like an elf, but the High Elf armies have always looked rather bland to me.  Nevertheless, the arcane phoenix looks downright majestic.  New voices and sounds are few and far between but were not unpleasant. 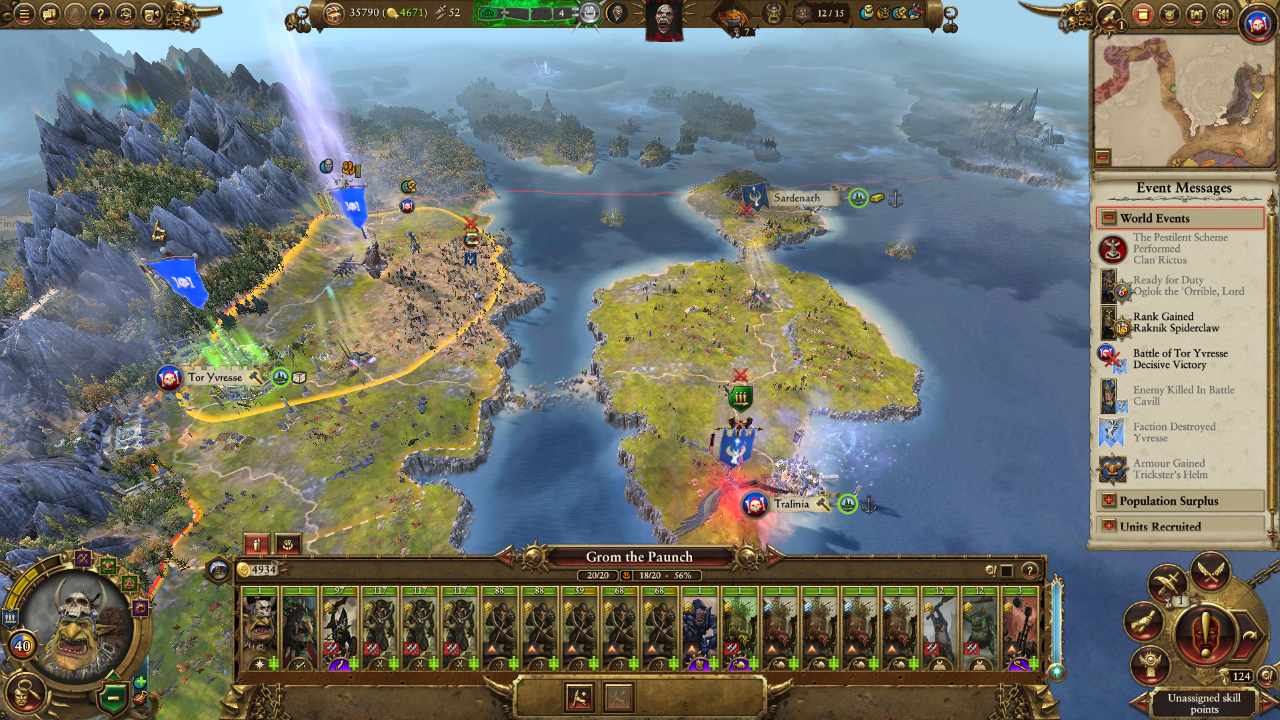 The mechanics of the Warlord and the Paunch are a joy.  Grom’s new cooking mechanic, which is essentially a simplified crafting activity, brings substantial buffs in various combinations, based on the ingredients chosen for any of the 15 available recipes.  Campaign events allow for Grom to purchase new ingredients, additional spots for ingredients in recipes, among other options.  The recipes cost scrap (in place of exhausting ingredients), so the player will need to choose carefully whether they want individual unit buffs or more campaign wide buffs with the limited scrap resources.

As you might expect of the fightiest of factions, scrap is acquired primarily by fighting things.  Individual unit buffs are unlocked via technology, but then can turn even the wimpiest of goblins into a beast.  In fact, I finished the Grom campaign with almost all of his original units.  None but the most basic goblin spearmen felt obsolete to me at end game, and even then, I didn’t mind putting the goblin spearmen against phoenixes because I knew they could still be useful. 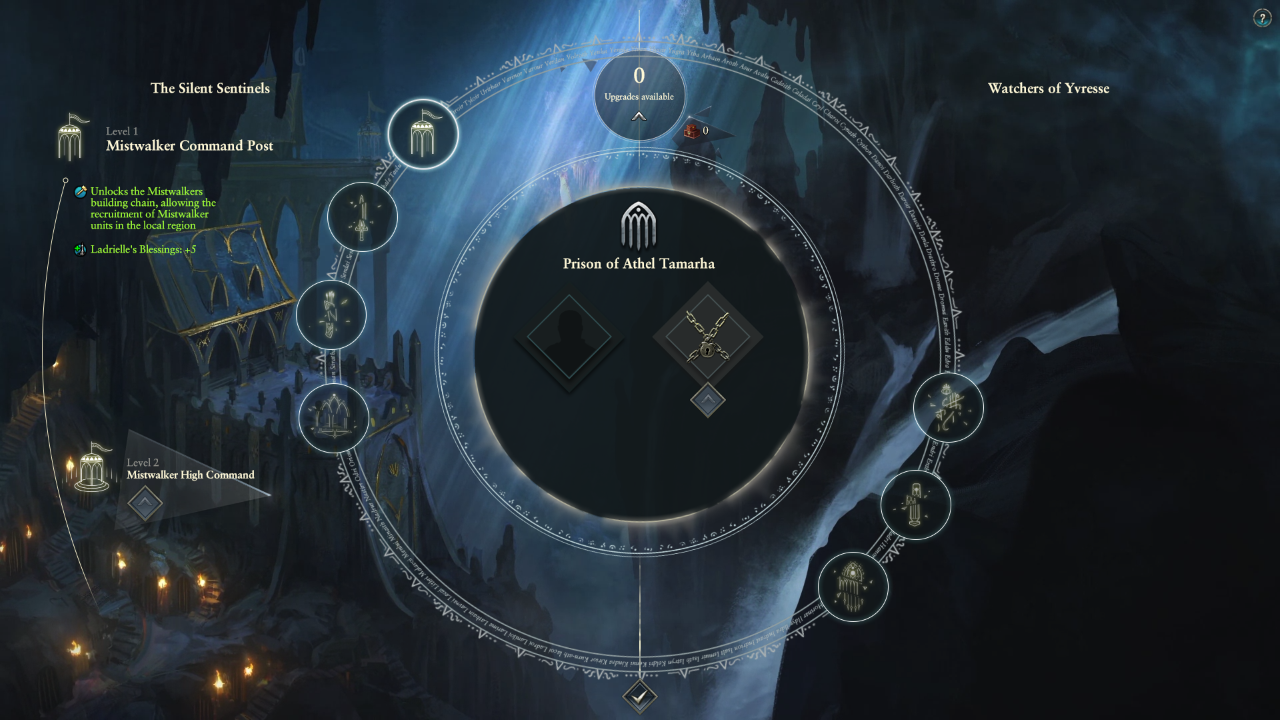 The elven mechanics appear comparable.  I didn’t get a chance to see how they play out in the context of a long campaign, but the Eltharion mechanic is based on the defensive role his city held in the past, as well as rebuilding the ruins of that fortification to reflect its former glory.  Each rebuilt ‘structure’ brings buffs and/or new units to the faction.  Capturing enemy lords (which can be done in real time battles or given a chance to occur in auto-resolved battles) offers opportunities to interrogate (granting a special buff to all Mistwalker-type elf units, based on the race of the captured lord), release (granting line of sight and recurring income), or execute enemy lords.  Capturing the enemies requires precision, luck, and good timing to make sure the enemy lord is defeated before the ‘capture’ debuff timer runs out.  I was initially nonplussed by Yvresse’s mechanics, but the thought of capturing enemies of different factions for race specific buffs intrigues me.

Grom’s campaign plays splendidly.  He has a broad array of potential early enemies that, frankly, I don’t often get to see.  Right in the opening, I faced off against Greenskins, Dwarves, Wood Elves, High Elves, Bretonnians, Tomb Kings, and Lizard Men, taking my battles to whichever faction looked at Grom the wrong way.  I chose to play him like a proper goblin king, and that meant eating my captives as often as possible and constantly pushing for a good scrap.  Grom’s faction favors an aggressive playstyle, which I prefer.  Mid- to late campaign was more difficult, as I was focused on expanding the reach of Grom’s empire and fending off pesky elven invasions of the Southlands.  Eltharion’s campaign, by contrast, offered a broader array of enemies than, say, Lothern, still felt much slower and more evenly paced than Grom’s campaign.  But again, I didn’t get to see that at length. 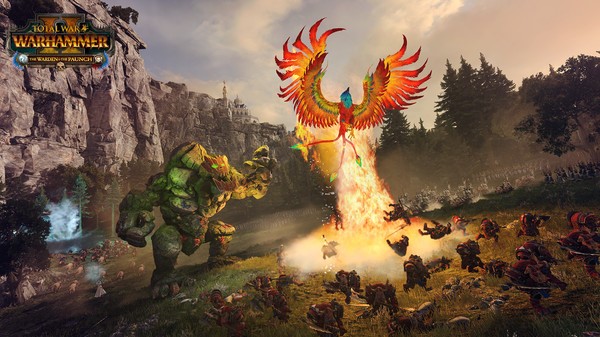 Campaign victory mechanics for The Warden and The Paunch follow previous DLC in that the new factions are not competing for the Vortex as the original factions are.  Rather, Grom’s goal is to discover enough recipes to recapture his greatness, before taking vengeance upon the pointy ‘eaded gitz that drove him out last time.  Eltharion’s goal is similar in that he must develop the defenses of Ulthuan by accruing his own resource.  Doing so comes from upgrading Athel Tamarha, Yvresse’s secret prison.  Both campaigns feature a capstone quest battle, which is in line with prior DLCs.

In sum, The Warden and The Paunch is a phenomenal addition to the Total War: WARHAMMER II world, featuring new mechanics, fun campaign gameplay, and spiffy new units.  I like it even more than the most recent, prior addition, and I really don’t have any complaints about the DLC.  Greenskins captured my attention and love this time around, but Eltharion’s unique mechanic might lead me to finally play a High Elf campaign to its end.  If you are looking to expand on your gameplay options, have additional choices for multiplayer factions, or just want to see a more fleshed out map, this DLC is worth checking out.