Deathloop is an interesting concept that is dripping in Arkane Studios' DNA. Take the satisfying stealth gameplay of Dishonored, mix in some crazy good gunplay, and throw in a time loop story for good measure and Deathloop is aiming to please. And ever since its initial announcement I've been intrigued. As someone who loved the Dishonored games and enjoys a good time traveling storyline, I've been waiting to give this a go. But how does it stack up so far?

Stuck in the loop

However, another assassin lurks on the island, looking to stop Colt in his tracks: Juliana. Deathloop plays these two characters off each other to great effect, building a rapport that had me itching for the next piece of dialogue between them. The writing at first felt a little campy, if I'm honest. However, it grew on me as I continued through the different time periods and environments of Blackreef, the campy humor and quick witted charm of Juliana's character winning me over.

Blackreef itself is a stylish rock in the ocean where the Anomaly is taking place. The island itself is connected via tunnels Colt has constructed to quickly move about the regions, and this actually works as a hub system for you. Each day is broken into time periods, seeing you visit the different regions during the morning, evening, noon, night and so on. Each of the time periods create slightly different circumstances, and some pieces of the story are only available during specific time periods, so you'll need to pick your way through in successive loops.

The time loop mechanic is the one that influences everything. Time moves forward, until it doesn't. Eeach loop puts you back at the beginning of the previous day, enemies, including the multiple Visionaries, which hold the key to stopping the loop entirely.

This also applies to your inventory, meaning you'll lose your weapons and items, such as trinkets that boost your weapon ability, as each loop completes. Thankfully, Deathloop has a system that allows you to keep some of your items on each loop in a resource named Residium.

You'll collect Residium by interacting with items that give off a multi-chrome shimmer throughout Blackreef, as well as taking out a Visionary. This Residium is used to effectively keep your weapons and accessories with you across loops, though you'll have to carefully pick and choose as you won't have enough to keep them all.

In addition to the various guns and gadgets, such as turrets that engage an enemy when one passes through its line of sight, or trinkets that can make your weapon deal more damage, Colt can use Slabs. Slabs give their wielder powers to help in their task, from the Shift tab that teleports you from one point to another (much like Dishonored's teleport ability), or a Slab that can link enemies together, meaning whatever happens to one happens to them all. These Slabs can greatly augment your ability to slink through each level, investigating the clues that are going to help get off the island. 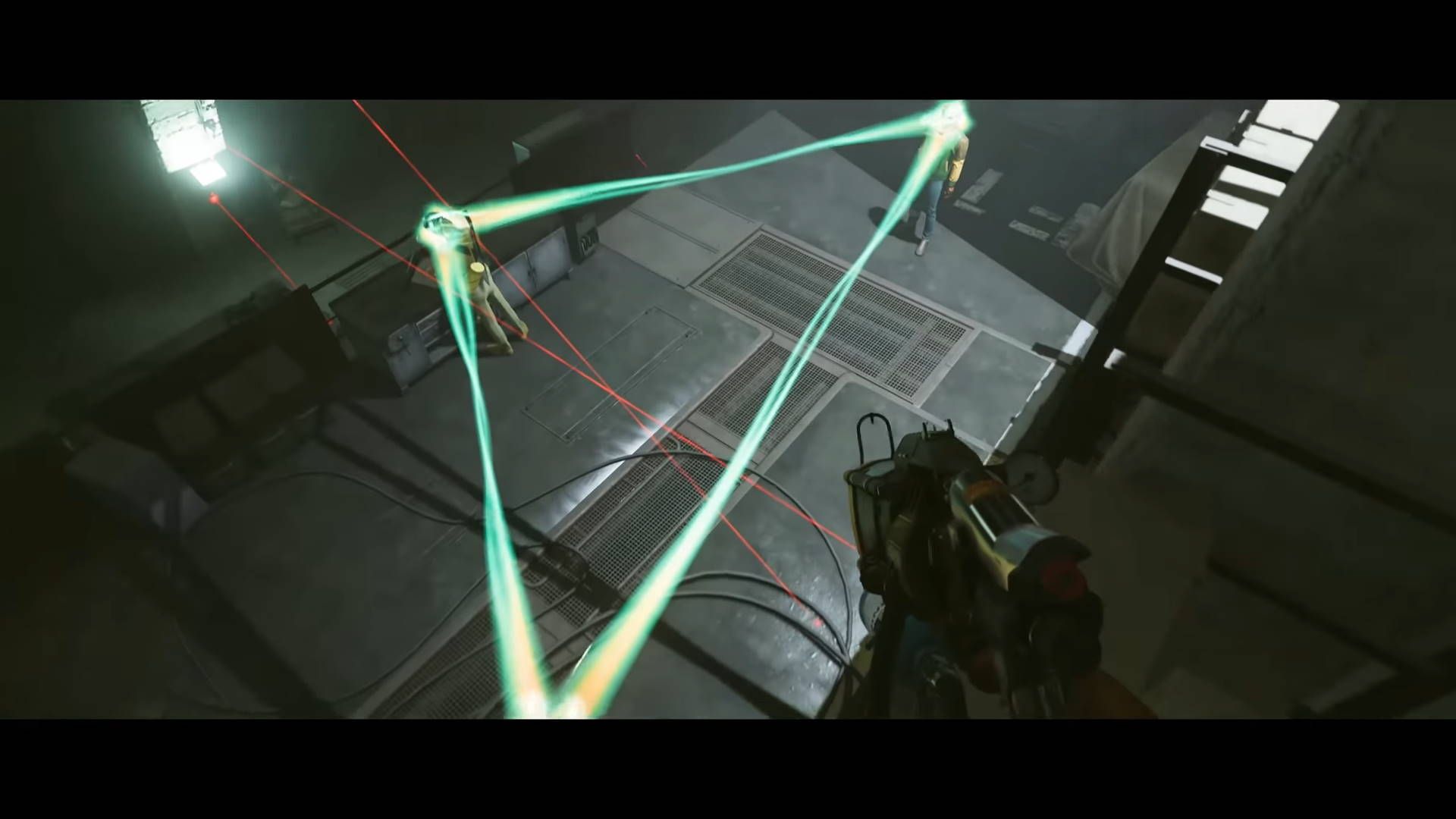 Carving Your Own Path

Like all Arkane titles, how you approach each situation really depends on your personal preference. Deathloop allows for full on stealth gameplay, slinking in the shadows and carefully picking off the Eternalists who flocked to the island in order to live forever in the loop itself. Additionally, you can go in guns hot, dealing with everyone in your path, or mix it up depending on the situation.

I actually found it better to start stealthily, picking my marks carefully and avoiding rousing any suspicion as I moved through each of Blackreef's regions, such as the urban center of Updaam or the docks where the airplane hangars (and a cult gathering) are. I'm not usually one for stealth, but it came a bit more naturally in Deathloop than most games I've played. This is coupled with Colt's Hackamajig, allowing him to hack turrets, security cameras and more to more easily get through an area - or turn the area's defenses against his enemies.

However, when I had to go loud, Deathloop also exhbits some satisfying gunplay. Each weapon feels accurate, and the sound design has each shot, each richochet pop with a brilliance that sells the scene. The weapons themselves, from the long-range, but slow loading Rapier to my personal favorite, the Fourpounder hand cannon, are fun to use and feel great to control.

Couple this with your Slabs, you have the chance to create havoc on the battlefield, such as linking four or five Eternalists together and taking them all out with a carefully placed headshot. However, your job isn't really to just decimate the Eternalists ranks - they will all just reappear in the morning - but instead explore the different regions looking for clues on how to stop the loop altogether.

Piecing together the puzzle is a mix of exploring and picking up audio logs, computer messages, and more strewn about the world. Each clue uncovers something new about each character, such as the brilliant Dr. Wenjie, who created the time loop itself, to Blackreef's resident DJ, Frank. Deathloop rewards exploring every nook and cranny, a piece of lore or exposition tucked away on a clipboard or in message sent from one character to another. Unraveling the puzzle itself leads Colt down the path of understanding the loop more and how to shut it down.

However, right there to stop Colt is Juliana, Blackreef's Scribe and Head of Security. Juliana can pop up at anytime, ready to stop Colt in his tracks and reset the loop. It's pretty exhilirating to constantly be worried if Juliana is going to show up and ruin my day, and at times can be a bit nerve wracking. Once I was on my way out of Updaam, having just ulocked the next piece of the puzzle only to have Juliana come to crash the party. 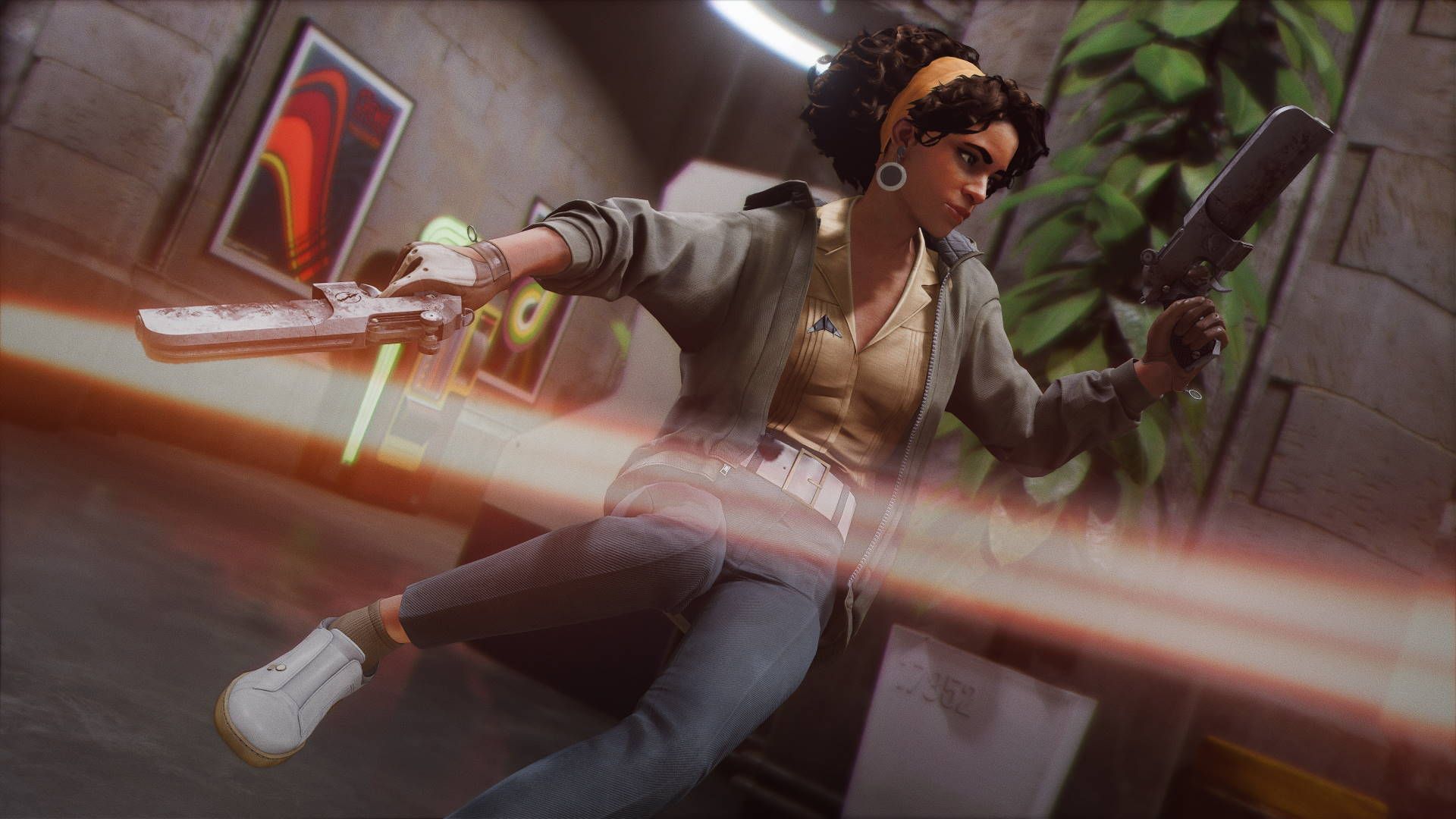 When Juliana is present, Colt will need to unhack and antenna to regain control to his tunnel system, all while avoiding both Juliana and Deathloop's NPC enemies, the Eternalists. You don't need to kill Juliana each time she invades, and if you engage and fail, your loop restarts, losing out on any items you haven't saved with your store of Residium.

It's an intersting concept that keeps Deathloop a bit more interesting, especially so as you can actually play Juliana yourself, invading friends and random player's worlds.

As Juliana, you'll strive to keep Colt's frustrated and looping, all the while building up her Hunter rank and unlocking cosmetic items for both Juliana and Colt in-game. Thankfully, Deathloop has no in-game currencies or cash shop, everything is unlocked through taking Colts to task.

For those who don't want other people showing up and ruining your fun, you can set your game to single player, though keep in mind Juliana will still invade, it'll just be an NPC.

Deathloop hasn't been without its fair share of hiccups, which is one major reason this is a review in progress and not our full review just yet. Playing on PC using an Intel i7-10700K, 32 GB DDR4 RAM and an RTX 3080 Ti, Deathloop looks beautiful. The art style really makes up for the fact that Arkane's Void Engine doesn't exactly give you picture perfect results like Cryengine or Unreal Engine 4. However, there have been some technical issues we've run into that remind me a bit too much like Dishonored 2, a game that was pretty maligned on PC in the early stages.

While I've been playing upwards of 60 fps, there feels like a stutter which is making those frames feel uneven, as if the frame pacing were off. Additionally, Deathloop has been crashing on us during a specific point in the story, almost like clockwork. This has made it hard to progress, as the predictable crash has made it impossible to continue at this point. We've reached out to Arkane for a fix and hopefully we'll have more news on this front.

It's a shame as it's impeding an otherwise fun experience thus far. Deathloop's time loop really adds a lot of strategy and stakes to each run, all while making death a learning process instead of a frustration. Finding a discovery, progressing a lead, or even just learning new approaches to an area if the last one didn't work all taught me to get better at Deathloop. One mission specifically had me repeat it about three or four times, each time I got better at my approach until I was able to pick through The Complex without alerting a single person. This trial and error approach lends itself well, though the crashes do make it frustrating to have to go back and replay the same thing over and over again like clockwork for reasons completely out of my control.

We'll have our full review soon, as well as provide an update if a fix can be implemented to deal with the crashing issues.

Tags
review in progress
Not So MMO
deathloop
bethesda