This is a refrain I've thrown into Faction chat all week in New World as I try to close out my review of the MMO here soon (you can read our New World review in progress from last week as well in case you missed it). Corruption portals are introduced rather early to players through the stationary, and somewhat annoying early on Fisherman Yonas Alazar, and they dot the landscape of Aeternum's regions at any moment.

The rewards for closing corruption portals are some meager amounts of gold, Azoth, a loot cache, and crucially more experience points than on many quests. This makes them an enticing way to level quickly, especially if you can get a good group going closing them.

Corruption portals aren't really anything new, either. If you've played The Elder Scrolls Online and closed any of the many Dark Anchor variants in the MMO since its launch, you'll find these portals familiar. The portals themselves vary in difficulty, going from smaller, quicker portals that can take about a minute to clear, to multi-wave battles that take a few even with a larger group. The rewards scale as well, with the large portals conferring a couple thousand experience points a piece.

What is hilarious to me whilst doing these is the sheer mess that is going on in front of you. I wrote an article a few weeks back happy that the UI in games like New World are putting less emphasis on the UI itself and more on the actual game world. One of my major points was that some UIs were too "busy." Welp, this is one area where New World feels like MMOs of old. It gets busy.

In fact, the piling up of players, especially with player collision boxing people out, all the while you have healing effects and other particles wizzing around, makes it incredibly hard to see. Thank God for massive enemy health bars, right?

This zerging makes for some fun, yet outrageously chaotic encounters. Enemies spawn, only to be descended upon by 10 or more people at once, quickly burning down the enemy before you might be able to land a strike on them. AOE attacks here reign supreme, as they can at least hit something through the cavalcade of people surrounding you. You don't get mastery or XP for every kill either, so the times I would - and if I could string together some dominating kills to keep getting mastery, it made it all the better.

The simply dance of moving throughout a zone with a large group of friends, though, makes these even more enjoyable. It's also a great way to flag for PvP and gain that 10% bonus XP without fearing getting ganked. Earlier today we had about 20 flagged players with us, making the other factions who were in the portals alongside thank each other in Area chat for making the choice to not flag (also shout-out to that lone Covenant player who attacked out healer outside of Brightwood, only to see 10 more Syndicate crest the hilltop afterwards - you are a treasure). 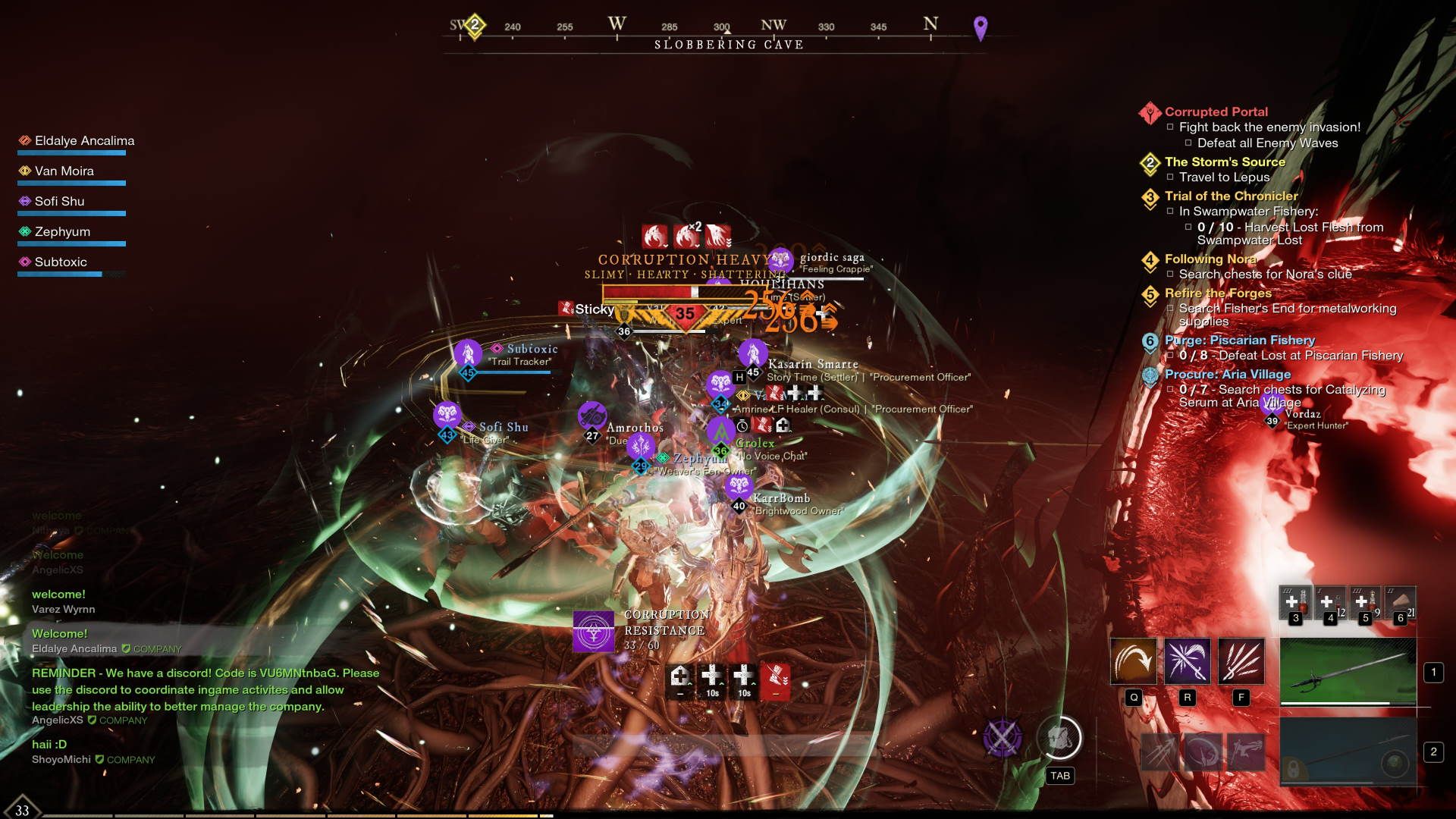 What makes the zerg worth it, though, is the quick leveling. Sure, you're not getting a ton of mastery here, but it's a fantastic way to group up and level, especially in the mid-game when things can start to feel like a slog. I'm about to hit level 35 and I've done mostly portals since hitting 30 two days ago. It's satisfying, especially as it makes some of the PvE stuff I'm doing in Weaver's Fen a bit easier now when there isn't a portal group going.

I've also found it a good way to meet some of the more active people in your faction. You can learn how each other plays, their skill set, and this could go a long way in a faction war or even a settlement invasion. Having this time to group towards a common goal, learn each other's play styles and more in the portals has helped me learn who I want healing me when the next region is thrown into conflict (seriously, Sofi - you are the best). I've learned who my favorite tanks are through this (Torikatsu, Lyle, Eva - all epic), and it's helped hone my positioning as a flanking DPS player. Fighting through the zerg to send a flurry of Rapier strikes against a corrupted scion is only going to make the muscle memory easier when it's a Marauder player I'm flanking in the next war.

Corruption portals are a statisfying mess. And while they are familiar thanks to my hundreds of hours in ESO, I love them all the same.