Within my NA-West server, there is a power struggle. Actually, it would be safe to say there is a power struggle in every server now that I think about it, but that's neither here nor there. Within my server, Syndicate is the faction to beat. We control most of the map in New World, including the heavily trafficked area of Everfall. We were the first to stake our claim, with the company Story Time achieving that server first (I was stuck in a queue when we did so...).

Since then a coalition of Syndicate companies have started to dot the map, taking regions and protecting the valuable holdings the faction owns. Grumbling in global chat warned that if Syndicate got too powerful, players would just leave the server when transfers came up this week.

I have to admit, I'm midly amused by this. Since New World's faction PvP was announced, it gave me flashes of one game I play a ton: The Elder Scrolls Online. That MMO couches its PvP around a three-faction battle for the Imperial Throne. Yet it's EVE Online I'm being reminded more of as our server inches closer and closer to warfare.

The reason? The human element.

It's not simply a map that you're flipping one color or the next. With each region comes its resources, its tax revenue, location to other highly trafficked regions and more. Players are forced to go through and quest as part of the main story questline in some spots. There are real, tangible reasons to capture and hold a region in New World, whereas in a game like ESO it's a strategic location on a single battlefield.

As a result, passions are already running deep. Governors of one region are advertising that they will "never raise your housing taxes above 10% as long as they own Everfall" or trying to convince players to set up shop in Weaver's Fen. On our server, Marauder's are in the prime position to supplant Syndicate - so much so that the leaders of the larger Purple companies approached Covenant with an offer: we'll work with you to hold your territory and keep Marauder's at bay, if you don't attack our holdings as well. 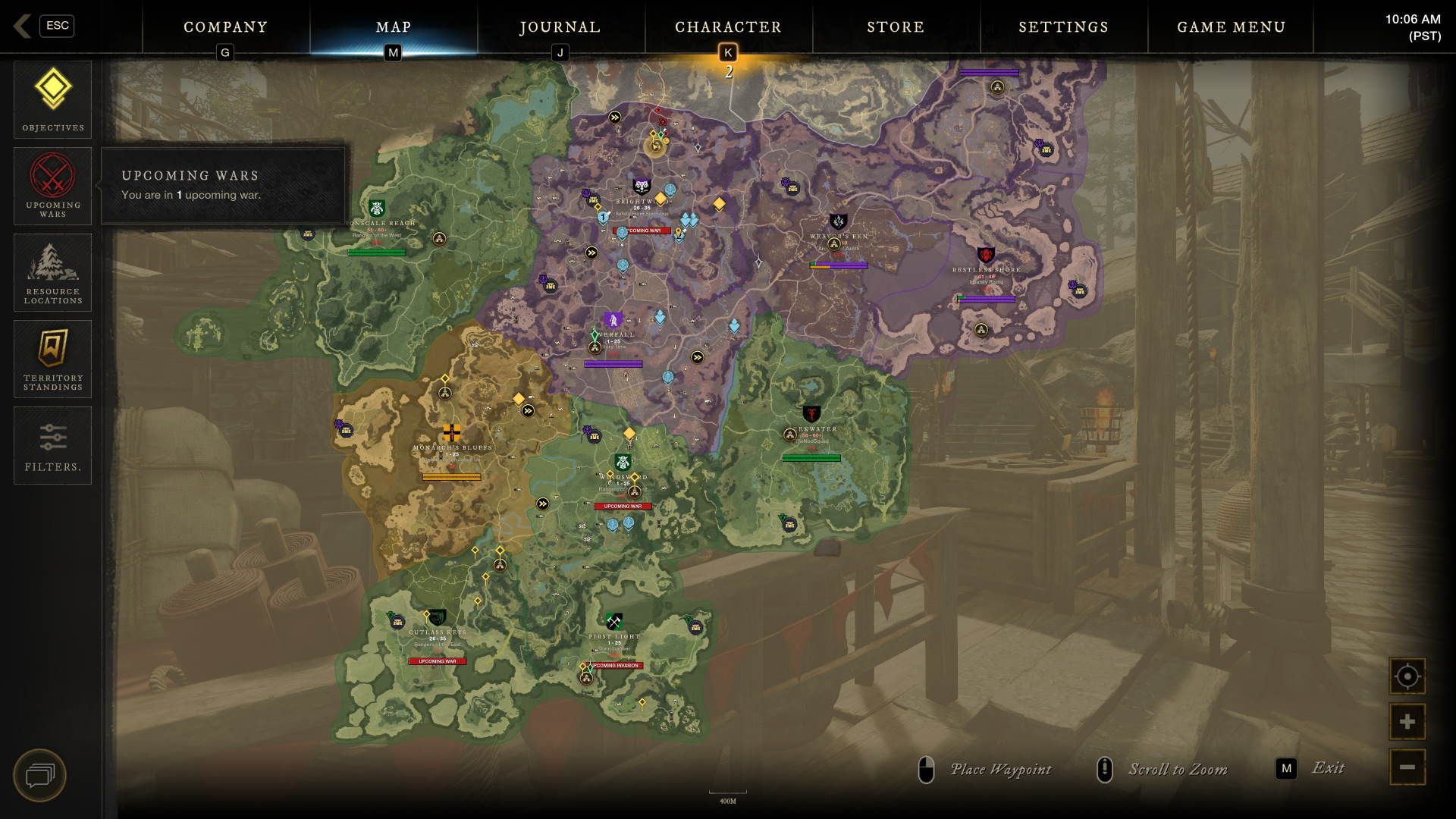 It's one of the first instances I can think of on our server where diplomacy was being implemented organically. Marauder's were coming for Syndicate all the while coordinating to take out Covenant's last region in Monarch's Bluffs. Syndicate threw the Pious faction a bone, offering aid, which the Covenant eagerly took.

However, as a friend of mine still in Story Time, the most powerful company on our server at this point, told me last night in a text thread, the Covenant apparently broke this treaty, sending Brightwood, another Syndicate holding, into conflict. This was likely in an effort to use our current focus on the impending war with the Marauder's in Windsward to their advantage.

It reminded me of stories in EVE Online, where players would routinely work on diplomatic solutions, yet keep the backstabbing play on hand just in case. Indeed, EVE's history is dominated by the actions of its large player empires and their dealings with each other - dealings that parallel real-life governmental operations at times.

While warfare in New World lacks the organizational, strategic and tactical situations players in EVE have to contend with, the feel is the same. The human element, where any one player or decision can doom or save an alliance is something to always keep in mind when planning, something that seemed to catch the leadership of the Syndicate companies off guard.

In the wake of this breach of the treaty, the Syndicate is now fighting a war on three different fronts: Cutlass Keys and Windsward against the Marauders, and in Brightwood against the Covenant. There is now a concerted effort to push the Covenant completely out of holding territory in New World at the moment once these wars are cleared up.

At the end of the day as well, people are going to people. For all we know the Covenant was playing the Syndicate, perhaps scheming with our Maurading enemies the whole time. This type of emergent gameplay though is why PvP in New World shows some real promise to keep players engaged. There are real stakes here as well: Should the Syndicate lose these three wars, the balance of power on the server will be flipped, especially as the population moves on from the starter zones and into the mid game.

But what makes me so excited is that this all happened organically. The two factions were pushed into a corner by one dominant, coordinated faction, and are fighting back. The unfortunate part that will keep these stories from being as long-lasting or bombastic as those we see in EVE Online is that these events only affect a small portion of the overall population. Servers being segmented keeps these struggles from being a dominant headline. In EVE, a border conflict in nullsec that turns into an all-out war can effect the economy of a trade hub 100 jumps away. It has universal reach and has an effect on every single player who undocks in the MMO.

However, these isolated events remind me of the stories I've read and shared drinks with players about in EVE Online. And that is not bad company for Amazon to be with as New World continues to trend upward.