Rushing into an L-shaped room ahead of me, I started to take fire from behind. However, once in the room, I’m no safer as I immediately came under a hail of bullets from my left. These machine gunners needed to go, otherwise, my Squad would be the ones withering under the gunfire.

I pull out a grenade and toss it into the room, blowing away two of my enemies. However, one remained, sending more fire my way. At this point though, my squad leader and marksman took point, finishing off the job and clearing the room. We had taken the building, cementing yet another memorable experience in the tactical, first-person multiplayer sim Squad.

Released in 2020, Squad pits teams of up to 50 soldiers into two factions, fighting for control over objectives placed strategically across a given map. Within a team, players are split up into groups of 9, their Squads, with each player taking on a specific role, such as a Leader or Marksman. Some of these roles, like Medic, are limited to one per Squad, while others have a limit of multiple per team. Every role has its own specific weapons and supplies, but each has their primary rifle, a shovel, a field dressing, and grenades, making each role feel similar and different.

While each role in Squad starts off with the same basic gear, in practice each role is unique. This is extended even to the different factions thanks to the weapons and attachments each has to offer. Now, clearly, the Russian army won’t be running M4A1’s with American optics, but even within factions and roles, there are differences in weapons and attachments that make the gameplay feel different.

As a result, laying down 200 rounds of 5.56 through a machine gun as the aptly named Machine Gunner is going to feel distinctly different than picking off enemies one by one as a Marksman. Attachment and load-out differences play a role here too, making similar roles in each Faction feel distinctly different thanks to what each has available to them. 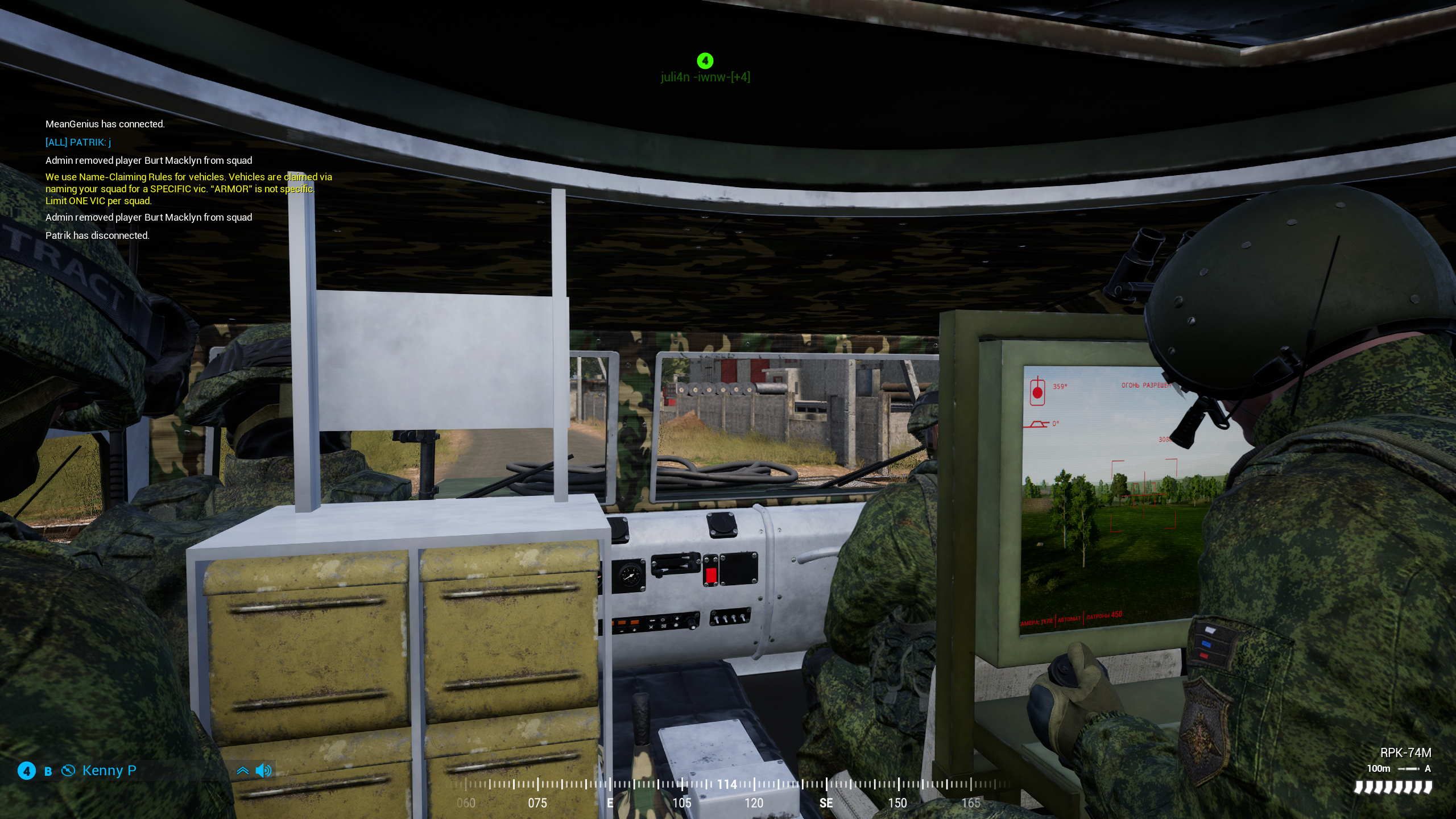 With the Machine Gunner being my favorite role, the difference in the minimi forced me to diversify my strategy. Instead of being up close and personal with my minimi, I would typically find myself dealing damage as far away as my optic would allow when playing the role in the US Army. Playing in the Irregular Militia, the same weapon is better suited for picking a good place at a medium-range from the enemy and laying down suppressing fire, allowing my fellow squadmates to advance on a position. Sure, the gameplay changes with a different gun, but Squad is unique because the same gun fills many roles and forces its soldiers to change their play according to those roles.

Vehicles also play an important role in Squad, both as a quick way to move troops around to objectives, and also help with logistics on the field. In Squad, to build a spawn point or a resupply station, you need supplies. 5-ton trucks, as well as acting as troop transport, allow players to move construction materials and ammo across the map quickly. This gives infantrymen the ability to make fortifications to respawn and resupply. Also, the trucks act as portable supply stations, allowing soldiers to restock on the go. The vehicles in Squad not only allow you to do that but are an essential part of combat because of it.

Another important aspect of Squad is its air vehicles and communication. Helicopters and amphibious vehicles make the combat feel multidimensional, and provide players with a sky-high strategy limit. If a team is communicating, it can orchestrate air support, supplies, and infantry maneuvers to dominate the enemy. Without communication, the enemy is confused for friends hastily. If the helicopter can't tell the difference between friends and foes, and it starts raining hell on friends, the team will lose. Not only is the strategy ceiling high, but the floor is very low, and Squad makes sure that communication remains an essential part of combat due to this fact.

Though its mechanics, vehicles, and gunplay feel good, visually Squad suffers from some really lackluster texture work. While the lighting in Squad is great,creating a world that looks vibrant, this illusion is broken when you look at any one thing too close. Thankfully, one of the major aspects you’ll be staring at a ton, the guns themselves, are beautifully detailed, just don’t get hung up on the fact that the surrounding textures can look muddy at times. 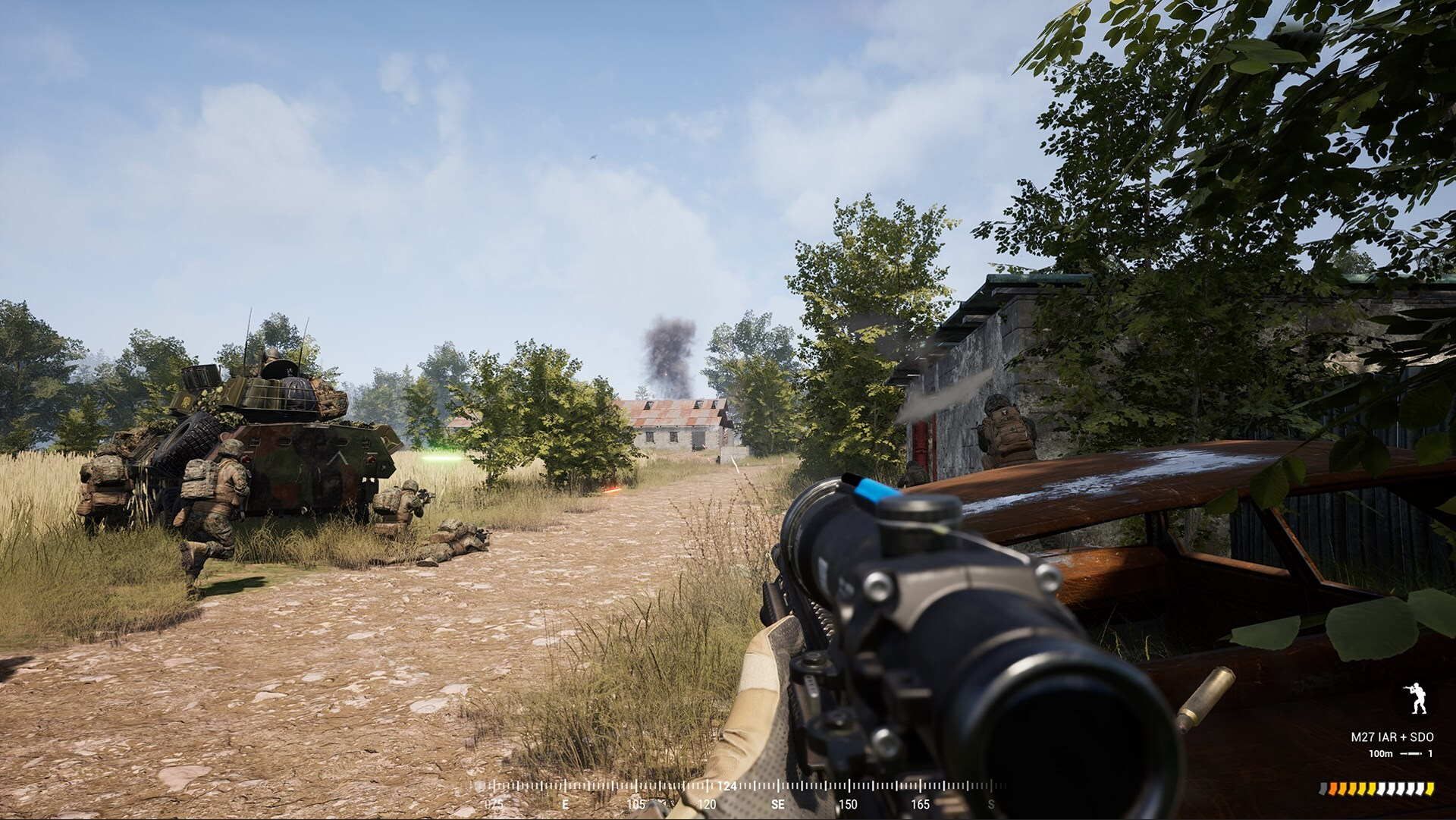 I’ve enjoyed my time in Squad thus far, especially thanks to its incredibly strategic on-the-ground combat. The fact that communication and real battlefield logistics are necessary to add so many dimensions to the experience that it creates some incredibly fun and immersive moments. It’s not perfect, but Squad provides memorable experiences: from keeping an enemy from taking my Squad’s position or finally one-tapping the idiot trying to move on your machine gun nest with a simple iron-sight AK-47, Squad is definitely a title worth looking at if you’re itching for that next multiplayer combat sim to whet your appetite.