Mortal Online 2 is a fully open-PvP and full-loot MMORPG from developer Star Vault. Normally, the words “open PvP” and “full loot” would scare me away, but I believed that I’ve spent enough time in other highly-focused PvP MMOs now, like New World, that I felt pretty confident in my skills. All you have to do is not die, right? How hard could that be? As it turns out, it’s pretty darn hard.

I’ve spent the past week in Mortal Online 2’s world of Nave, just after its most recent beta server wipe. My first day was spent absorbing all of the information in the tutorial area of Haven - fighting zombies, beating back bandits, and learning the basics of crafting.Thankfully, Haven allows you to learn the basics of Mortal Online 2 in peace and without the worry of losing everything to an overzealous newbie. It’s a safe haven for new players able to dabble in the in-depth crafting system, PvE mechanics and more. It also gives you plenty of fodder to practice Mortal Online 2’s combat against.

The directional-based combat is something that took me a while to get used to. I’ve played similar systems, such as in Kingdom Come: Deliverance and Chivalry 2, but there’s a certain jankiness to Mortal Online 2, combined with a faster paced combat, that makes for a steep learning curve. By default, you click the mouse and then aim in the direction that you want to swing. By holding down the mouse button, you charge your attack after choosing the direction for maximum damage. There is a parry system in Mortal Online 2 which requires you to block from the same direction just before an enemy attacks. This lets your attacks charge faster, while also reducing the damage you take.

This worked fine in practice when fighting slower enemies like the zombies. However, once I encountered the bandits it felt like my attacks couldn’t land fast enough before I was getting hit myself, even with the faster charge on my attacks from parrying. It felt great everytime I could successfully string together perfectly timed parries and counterattacks, but it was easy for me to get overwhelmed when fighting more than one enemy. Bandits are particularly chummy, and there’s usually two or three bandits together that will pull at once to team up against me. Once you can hold your own against two bandits at once, you’re probably ready to move from Haven to the mainland. 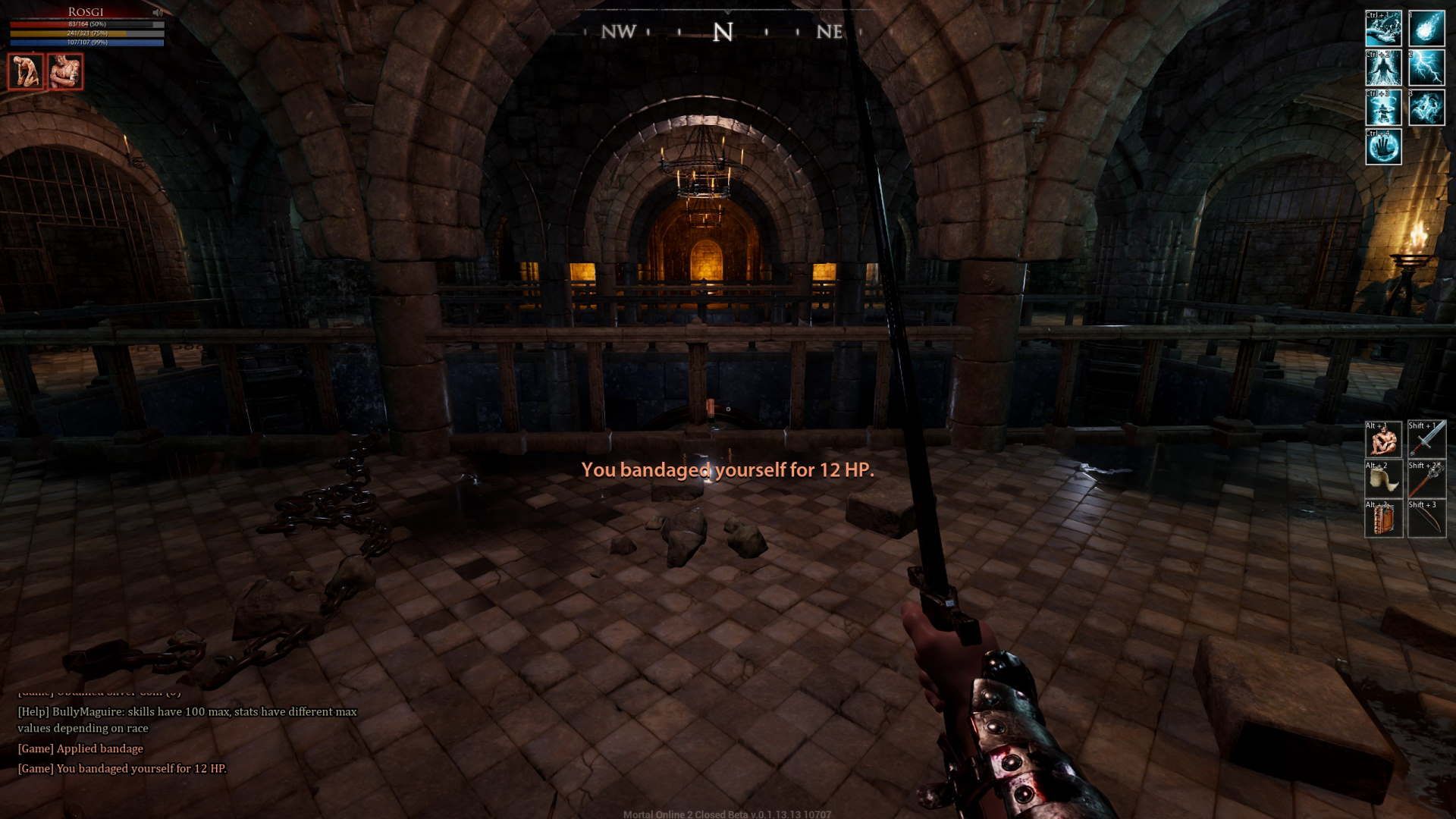 When I was finished with all of the presented tutorials, I decided to head towards the mainland of MO2, where the world feels massive in scale. I chose the city of Fabernum to start in, which turns out to be a terrible mistake as it was seemingly a more active hotspot for PvP skirmishes. After leaving the safety of the city gates and journeying to the closest graveyard to farm zombies for money, I was attacked from behind by another player. This took me by surprise since Haven had all PvP disabled, but I was able to quickly respawn and trek back to my dropped loot. Unfortunately, the other player did take all the gold I was carrying. Which leads me to an important lesson that I actually learned from playing EVE Online: never equip or carry anything that you cannot afford to lose.

The way that resurrecting works reminds me of World of Warcraft in a way. When you die, you become a ghost right where you’ve been slain and can roam the open world (with faster movement speed too!) You can either choose to resurrect at the closest priest or from wherever you’ve set your home point via the character sheet. Alternatively, you can also just spirit walk over to any priest in the world; which are easy to spot since they emit giant, bright red beams into the sky like a beacon.

There were times that the griefing did get overly vexing. When all you want to do is mind your own business and kill mobs, it can be disrupting to encounter another player - or whole groups of players sometimes - that just want to murder everyone in sight. The nice part about these occasions is that, usually, other disgruntled players will band together to take out and steal the equipment of whoever has been griefing them. There’s nothing quite like watching a half-dozen naked players chasing down someone else to finally exact their revenge.

Although it was frustrating at times to lose my gear, gold, and materials I’d been gathering, it’s also fairly easy to replace equipment and start out again. Kill a few zombies and sell their parts, or hunt down some local fauna, and you’ll quickly get enough gold to buy a new set of armor and a new weapon. If you’re smart, you can always prepare a spare set of gear or two at the town bank as well. Eventually I stopped caring so much whenever I died, and instead took the opportunity to practice my 1-on-1 PvP skills whenever a lone griefer would drift my way. 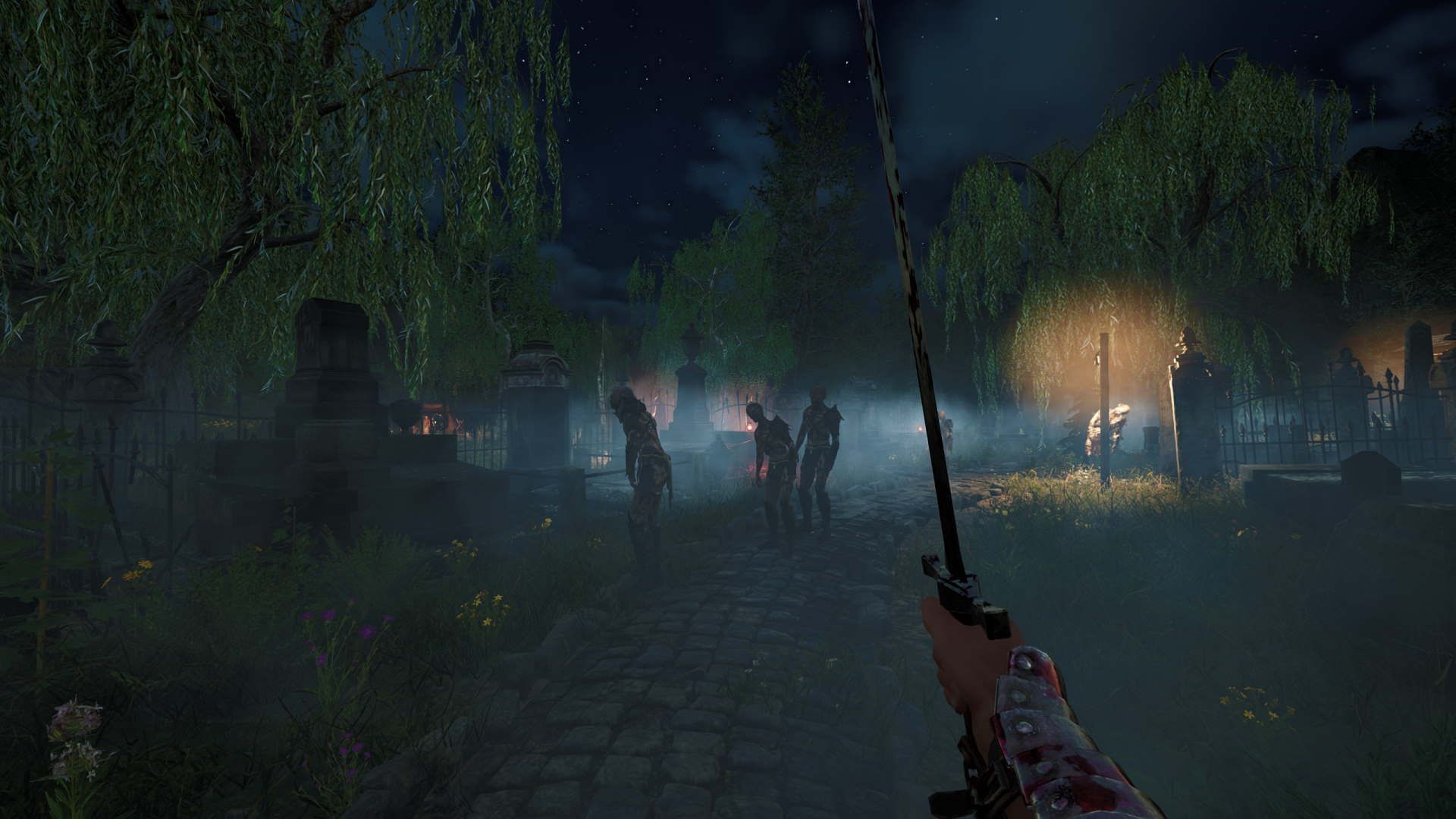 Most of my negative experiences so far in Mortal Online 2 have been when I was playing solo. It’s clear that being part of a group, or at least having a friend to watch your back, is the  best way to explore the world. MO2 does have proximity-based voice chat, which can be quite literally life-saving when you’re running away from bandits in a crypt, or need to ask for directions back to town. I’ve encountered several helpful players that were happy to help whenever I needed something. Thankfully, not everyone in MO2 is a griefer. Unfortunately, there’s no actual party or grouping system in MO2, which does make playing with strangers more arduous..

Hopefully, that system will be included at some point. In fact, the devs have listed several features that will be missing from launch, but are planned to be implemented early after release. It was recently confirmed that Necromancy will be the next magic school to be incorporated, and the Elementalism school of magic will be added later on as well. Additionally, there’s an entire Thievery system being worked on that plans to expand and increase the risk/reward aspect from the original Mortal Online, taking additional inspiration from Ultima Online.

There’s more features to come, and the developers have promised a roadmap to come soon after launch. It’s regrettable that many systems that were already in Mortal Online do appear to be missing from MO2 at launch, such as the aforementioned schools of magic, the thievery system, and the ability to dual-wield weapons. Some new features are added for launch, including a new in-depth character facial customization for character creation, a new Draconigena armor set, new massive bosses, and new dungeons to explore.

For the launch of Mortal Online 2, I’ve already decided on what type of character build I’m going to start off with. Based on my early experiences of getting ganked in PvP, I’m going to make a high Dexterity foot-fighter with a speciality in archery. My goal is to make a character with as much running speed as I can manage, so I can run away from other players but still turn around and fire an arrow in their face . After all, if the griefers can’t catch up to me, then I shouldn’t have any issues with dying, right? I look forward to creating my new main character later today when Mortal Online 2 officially launches