As I undocked from my station in Eurgrana in EVE Online, I set abou the long journey back to Jita's trade market, a good 20+ jumps away. During these jumps, I would simply be going from stargate to stargate, jumping from one system to the next, not a whole lot going on. Sure, there is the threat of gate campers in some of the systems, though most of my route took me through Hisec systems usually safe from such practices.

However, another thought popped in my head once I started warping to the first stargate on my route: What a waste of time.

Traveling and exploration themselves aren't usually seen that way by me. Discovering new locations, new quest hubs and more is one of the joys of playing an MMO. I remember the first time I came upon the Rivendell valley in The Lord of the Rings Online after slogging through monster after monster in the Trollshaws. It was thrilling, beautiful and really made the prior moments worth the challenge. The payoff paid for the deaths and struggle as an underleveled Hunter made his way to Elrond's house.

EVE Online has felt the same way to a degree, though travel in EVE presents challenges not from enemy NPCs but also the players that lie in wait to take out unsuspecting ships on autopilot. However, depending on the ship you're flying a trip from The Metropolis region to The Forge could take a few minutes or a half hour. Slow align speeds, slow travel speeds to approach gates - flying an Orca makes this journey much more of a slog than piloting the faster Stratios I was in last night.

It got me thinking too: a world with just limitless-feeling technology, where we are all literally immortal clones of ourselves, why hasn't anyone mastered the ability to fast travel? Jump Clone states exist where once a day you can activate a clone at a faraway station and jump in there, but it's really not the same in the end. You don't take anything with you when you jump, so you'll need to ensure that your other clone state has a fully fitted ship whereever you end up. And Jump Clones can only be activated every 24 hours, putting a hard limit on the travel. 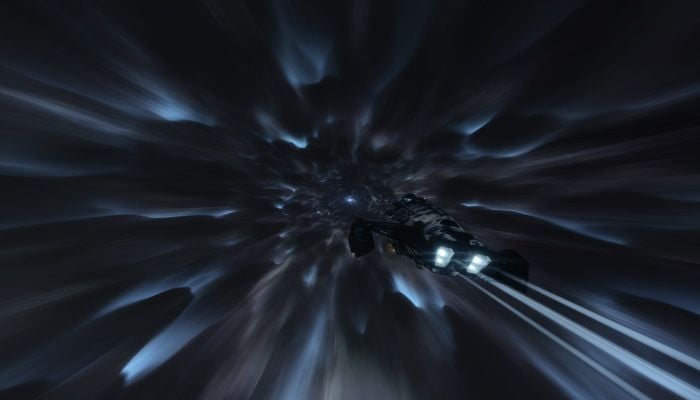 It's meant to allow players to quickly get from one station to another, but it's not the same as say World of Warcraft's portals, or using a Hunter in LotRO to taxi a party from Bree to Rivendell with the click of a button. Or even make players discover travel spots like The Elder Scrolls Online does with its wayshrines before it can be activated - and then charge players for the convience to do so in a gold sink. Fast travel not only connects you with the wider world of a game, but also means more of your time is spent actually playing it rather than running back and forth from hub to hub, wasting what could be valuable game time for some.

I'm not really saying EVE Online should have fast travel like the rest of the MMO universe either. EVE is unique in many ways from its MMO counterparts, and part of the risk in the sci-fi game is undocking and moving your ship. You have to defend yourself if you come under fire, while making it over 20 jumps without incident can lead to highly audible sighs of relief. Imagine how a fast travel system would wreck havoc on warplanning in the giant wars of New Eden as well, as many times the war plans are drawn up knowing how long it will take forces to muster in systems and then travel to the engagement system. The travel time is intrinsic to the gameplay that makes EVE, EVE.

However, I can't help but feel a little grumpy when I know my game time is going to have a large chunk of it spent getting from one system to another because I prefer the market there, or I need to meet up with a corpmate in a far-flung lowsec system. At least it's not as boring as it used to be, thanks to EVE's new jump tunnel animations. Not being able to just zip back there is frustrating sometimes, even if the travel times are simply part of the EVE experience.

What about you, though? Do you mind spending large chunks of time simply moving from place to place, especially onces you've discovered once before? What do you think of Fast Travel in your MMO? Do you think they make the game "too easy?" Or, like me, do you like the convenience they offer, especially for busy gamers?