From the ashes of last week's sale of Daybreak Game Company to EG7 for $300 million, we learned quite a few things from the company now that the information was made public. One tidbit of information caught my eye and has had me thinking for about a week now: The Lord of the Rings Online on consoles.

Look, I think by now I've written enough articles about this game for readers of our fair site to understand that, winged-Balrog aside, LotRO is my favorite MMO on the market. I've actually thought about the MMORPG from Standing Stone Games on console before, hoping to see the experience make the jump to living room machines.

But like  the quest for Mount Doom, it was always a fool's hope.

I never thought the studio would have plans to actually put the aging MMO onto nextgen systems. But since it looks like it might be in the cards down the road, it's got me seriously contemplating how an MMO like this might work on console - and why I don't think it will personally.

From the get go, its not like The Lord of the Rings Online is the most visually demanding game on the market. The graphics, though improved with updated models here and there as well as higher quality textures throughout the years still shows its age clearly everytime I boot up the MMO. And that's fine, really. It's a game form 2007, not from 2020. However, it makes me wonder if people buying a shiny Xbox Series S|X or PlayStation 5 are going to want to see graphics from a decade prior on their machine.

Xbox maybe - the backwards compatibility extends to the OG Xbox, but there's something about nostalgia forgiving visual sins versus a new game hitting the platform that year. LotRO would likely need to undergo a quite impressive visual upgrade to really compete with some of the titles on the platforms, especially if we think about Amazon's upcoming LotR-themed MMO coming to market in the next few years.

However, visuals aren't the major reason why I think, ultimately, The Lord of the Rings Online might not work on consoles, regardless of visual updates to the game.

The Lord of the Rings Online harkens back to a style of MMOs known for outrageously long skill bars - multiple skill bars in fact - all requiring the legnth and breadth of your keyboard to actively use each combat. It's not to say games like this can't be ported to controller - many players enjoy World of Warcraft with controller, and Final Fantasy XIV does a tremendous job of mapping its skill bars to gamepad. But in the case of the latter game, there is a huge caveat here that The Lord of the Rings Online will lack: Final Fantasy XIV was built, from the get go, with gamepad in mind. It was always meant to be played on either a gamepad or mouse and keyboard. 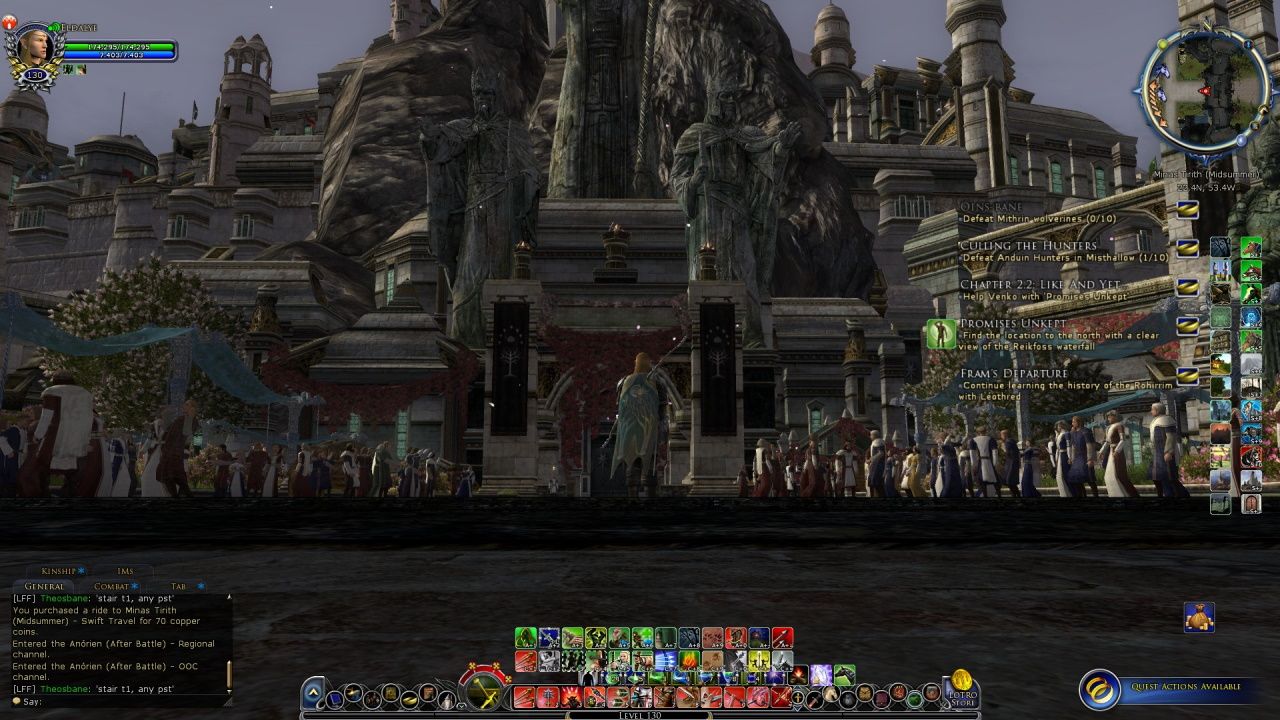 The challenge of an age: working this UI into a console control scheme

As such, the team at Standing Stone Games will need to figure out the best way to map the long, archaic (by today's MMO standards) skill bars into a control scheme that makes sense and is easy to use in the heat of battle for console players. I don't see that being an easy task. Could it be done? Sure - but will it be better or feel as native to the experience as a good old fashioned keyboard? Probably not.

While consoles nowadays more and more support mouse and keyboard in many games, The Lord of the Rings Online would still need to support a comfortable, creative control scheme to make it a success on the platform.

As an aside, it also makes me wonder how many players would even be interested in an older style MMO coming to the system. This is especially due to action-MMOs, like Black Desert, The Elder Scrolls Online and games like Warframe proving profitable, and, to be blunt, more engaging moment to moment, than The Lord of the Rings Online would be. Additionally, the current UI on PC still doesn't natively support 4K monitors. How would the team change up the UI to make sure it's useable and easily viewable on a giant TV screen? Not that PC players don't use TVs or even hook up in the living room, but console is a different animal - especially as that UI would need to be useable with a controller.

However, all of these potential pitfalls aside, being able to bring new players to Middle-earth and have them experience the incredible storytelling of the MMO from the past 13 years might prove more than enough to overcome deficiences in those other areas. Could we see the next community start to create their own version of Weatherstock? Which console would sport more users? And how would the playerbase on console respond when Amazon's upcoming game finally hits the market?

What do you think about this? Could you see an old MMO like LotRO come to console, and actually succeed? Are there other MMOs like it you'd love to see come to a living room near you?