A few years back I tried to introduce my daughter to The Lord of the Rings Online. She was excited. Gaming with each other has always been one of the major ways the two of us bond. Since she was 3 we've gamed together - from the old Disneyland Adventures game (and a huge reason I will never malign the Kinect - it literally gave me and my little one a connection) to Minecraft and Among Us right now.

So when she was about 9 years old I built her a gaming PC capable of playing some of the games she's watched me play over the years. The Lord of the Rings Online was one of the major games she wanted to play. She had just finished reading The Hobbit for school and she can tell you exactly why Balrogs don't have wings thanks to my many full-throated arguments with friends and family.

However, she struggled to really find her footing, even with me creating a new character with her to level together. We started Elves, my daugher going Hunter while I created a Warden, a class I hadn't really played yet. I was excited, and so was she. But as we moved through the starter area and she struggled, I wondered if it was simply too complex a game for her at the time. LotRO was unlike any game she had played, so we moved to different games instead such as Minecraft and Pokemon.

However, as she's gotten older, she's much better at explaining what the problems she has with some games are: she simply cannot see enough detail on screen to understand what she should be doing.

Ever since she was born I've been trying to fully understand what my daughter struggles with on a daily basis: an eye disorder called Nystagmus. As a result, her eyes never stop moving, which has an effect on her vision. The world isn't moving to her, but at 10 years old she was essentially declared legally blind by her eye doctor. She can see, but it's very low visibility. Small details escape her unless it's right against her face - and even then she's not truly sure if she's seeing it well enough. 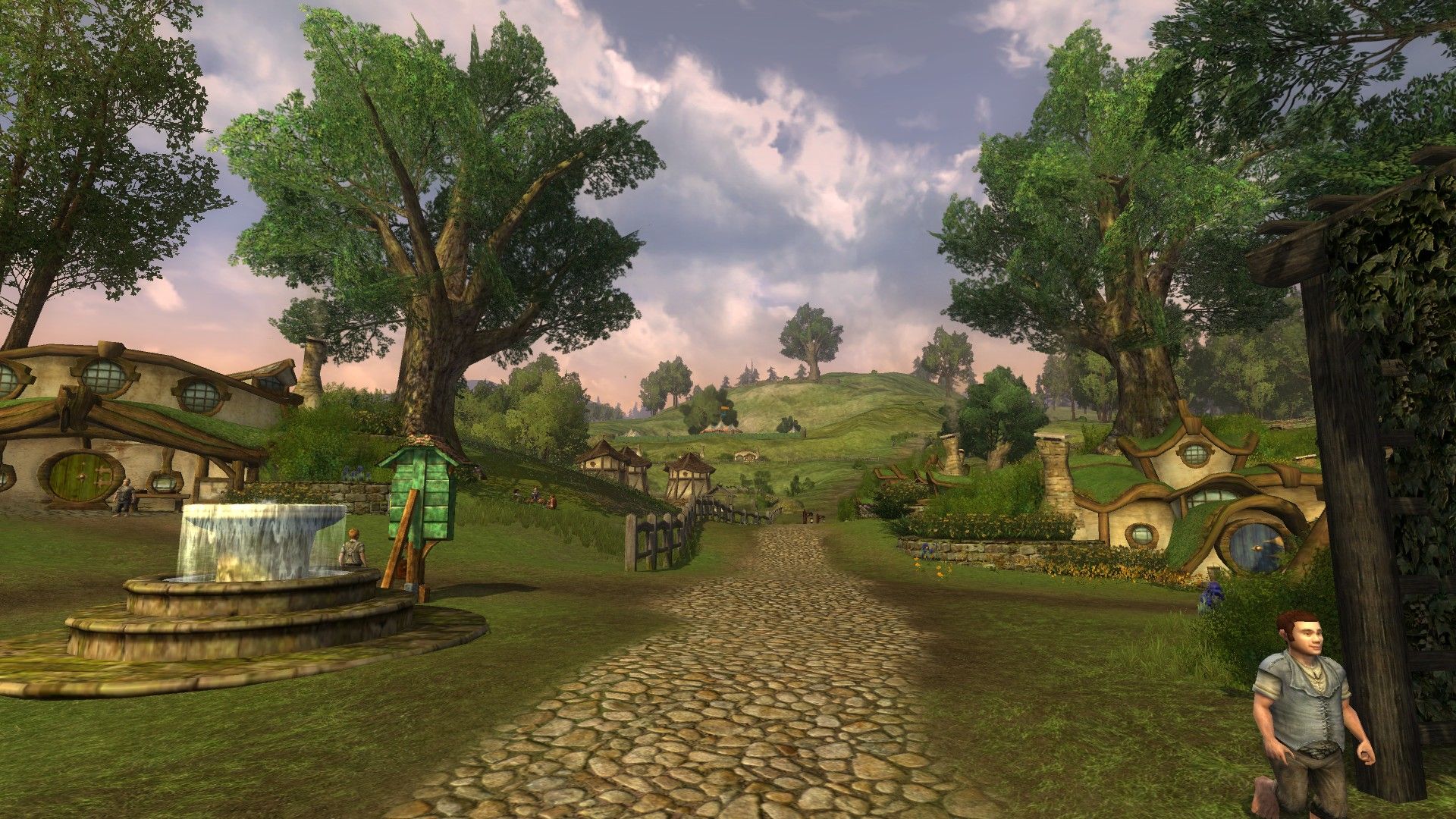 She's never let it hold her back, though. She wants to be an animator when she grows up and work for art studios that produce cartoons. She loves drawing, using tools like Gacha Life on her iPad to create characters she animates in her own videos. She is constantly creating art around her. She's read so, so many books. She doesn't let her low visibility hold her back from enjoying what she loves.

But every once in a while there is a game where she simply can't enjoy it because of her eyesight. And while she doesn't show her disappointment, I know it gets her down. It also has affected how she is able to play games with friends. Among Us is huge right now, yet she can't see some of the finer details when going about the different tasks, causing her friends and fellow gamers to get mad at her and accuse her of being the Imposter when it was simply her eyesight holding her back. Kids her age just don't understand that either unless they too are dealing with it as well.

This reared its ugly head this weekend as well, as she was invited to play a game with some new friends she made, only to have to bow out after it became apparent she just could not see well enough to actually play. These types of situations crop up in newer games, but really affect her when she tries to play some fo the older and more complex games that I like.

An older game like The Lord of the Rings Online doesn't really have voice acting, so all of the story is told through walls of text. Even when pushing up the text size and scaling the UI as large as we can, she struggles to read the text or see what she is looking for in the world. And as old as LotRO is, it's not the most accessible game in the genre.

Accessbility hasn't always been at the forefront of game designer's minds in years past. Just look at the convoluted UI many MMOs still use today. 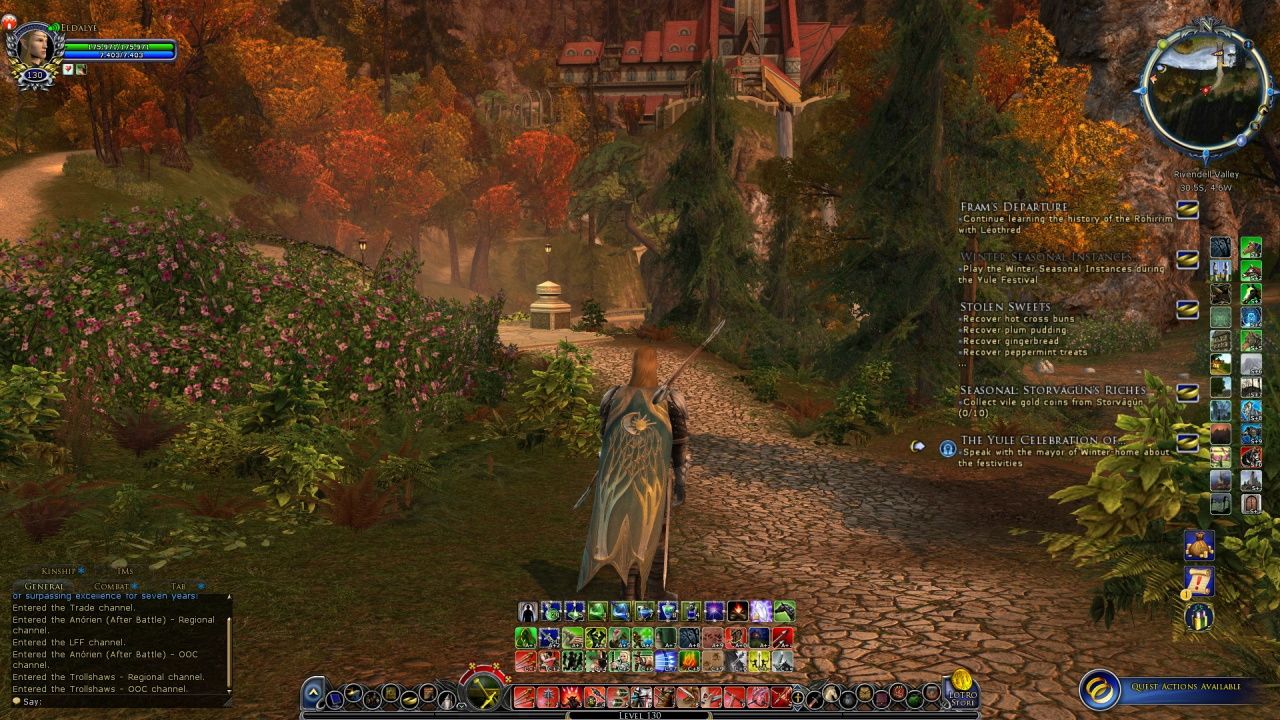 Recently, however, major game companies have made it more part of the norm, with The Last of Us Part II for example having some of the best accessibility options in the games industry - something that should now be the bare minimum for any game developer. Options like colorblind mode, more distinct audio cues to help those with visual barries understand more clearly what is going on, or even ensuring that the game supports multiple control schemes nowadays should be standard.

Additionally, as we start moving into this next decade, games that don't prominently feature voice acting should at least ensure that the game in question supports the basic text-to-speech functionality that Windows supports for many programs. This is what makes Minecraft so playable for my daughter. She can't read the chat, but she doesn't have to - Minecraft reads it for her.

Speaking of voice acting, it's one of the major reason The Elder Scrolls Online is the next MMO we're going to try together. Having every line in the MMORPG fully voice acted is a huge draw for her, and while it'll be a challenge still to clearly see item attributes, names and or even navigate the menus on PC for her, it doesn't feel nearly as insurmountable as LotRO feels right now.

The video games industry has always been less than stellar with making games accessible to everyone of all walks of life, and not just when it comes to catering to those who have physical limitations that make playing certain games harder. As the father of a daughter who wants to desparately play these games like anyone else, it's something that, as she's been able to better articulate her issues, I'm starting to understand more and more what she needs to be able to do so. Low-visibility modes for games, visual or audio cues for blind/deaf gamers, proper colorblind modes - these are just the tip of the iceberg. 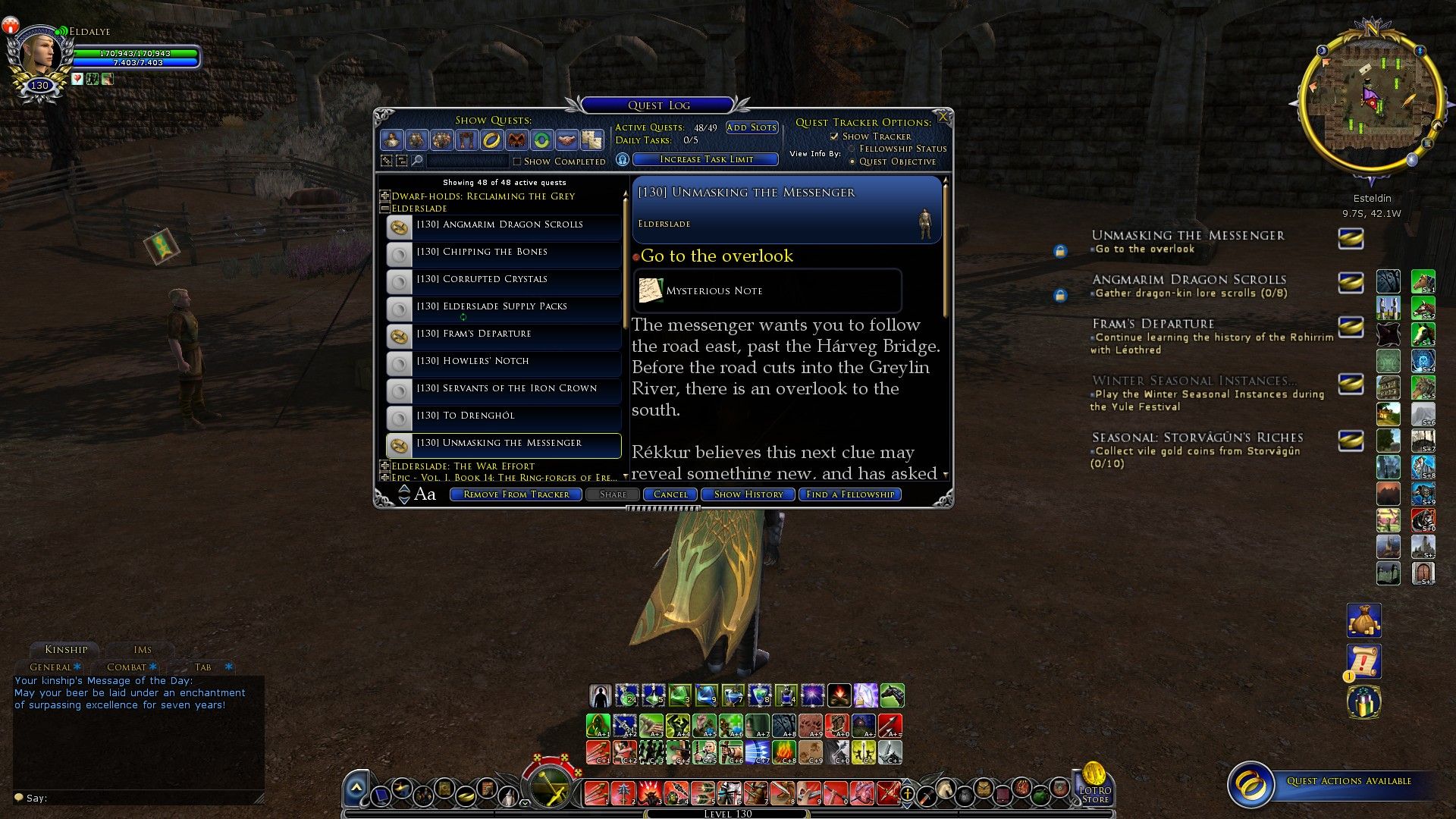 Even just being able to resize the text even more - or use Windows' own Text-to-Speech natively in LotRO would go a long way.

Hopefully as developers make or iterate on their games, these features will become more and more the rule, and not the exception, so that everyone can enjoy the worlds we all love and enjoy. I want my daughter to join me at the Party Tree in The Shire, to fight the troll at the top of Weathertop, or meet Barliman Butterbur in Bree. I want to watch her face when she takes her own character into the Rivendell valley for the first time and meets Master Elrond at The Last Homely House. She wants to fight this Balrog I keep telling her is "innacurate, but still cool." And better accessbility features in our favorite games can allow that to happen.

What do you think of the current state of accessbility options in MMORPGs, and was there an MMO that you think did it really well  (Wildstar comes to mind for me for its colorblind options specifically)? Do you think MMOs need more of these options? Why or why not? Let us know in the comments below.