I woke up this morning and put on my slippers and flannel robe while cleaning the night’s dream out of my head. I grabbed my cordless mouse off the nightstand and headed upstairs to sit in my red leather throne computer chair (not red or leather). I pulled my chair close to my computer desk and stared blanky at the screen. My dream came back to me and my thoughts of the days off old MMO days came back in a flood of ecstasy. Those were the days!

I want to take you back to the beginning of MMO time. I know Dark Age of Camelot (DAoC) was not the first MMO, and it wasn’t my first either, but something about it has stuck with me all these years. Something that will never be able to be recreated even if a “classic” server was introduced. You can’t just turn back the clock of an MMO and expect the same experience to be recreated. There is always hope, but one memory is not the same as another, no matter how well the stage is set to capture it again.

I want to warn you, though, these are my memories, and they are not accurate. I’m old, and my mind has warped reality and added a false sense of grandeur. What DAoC was might not actually be what DAoC was. The memory is more of what DAoC is to me. I’m taking you on a journey through a braintap in time. Hold on because it is going to get a bit bumpy! 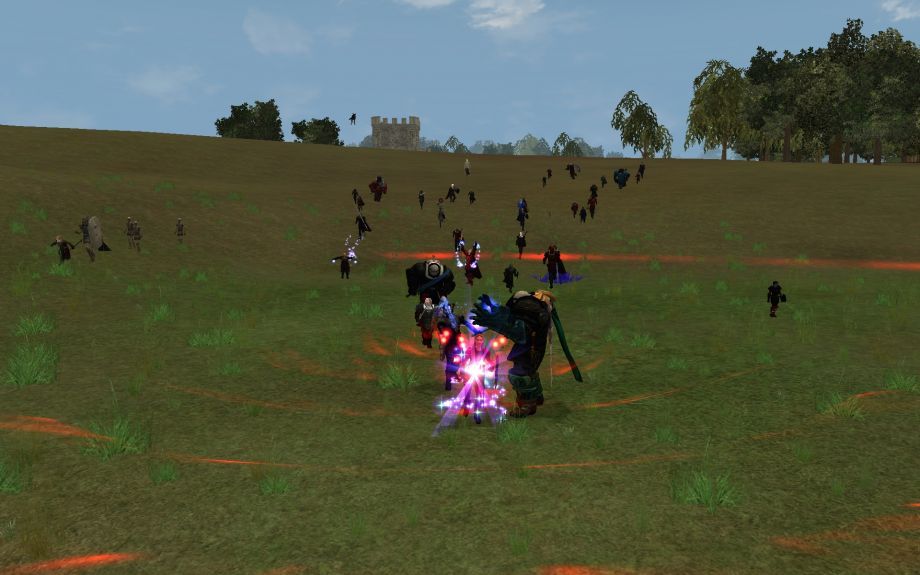 It was the year 2003, and I had just put down the Everquest pipe. I was living in England, and my wife had my third kid. Life at that time was a bit foggy. I remember diapers flying and babies barfing. Other than that, I don’t remember much of real life at the time. My friends were all playing this old MMO called Dark Age of Camelot while I was taking time off Everquest, waiting for the release of Star Wars Galaxies (SWG). I remember walking into the British equivalent of GameStop, which was also a bar and a Spice Girls emporium, to preorder SWG. The bartender/football bookie sat me down to discuss what DAoC was and why Midgard was in peril. After a couple of pints of this black tar liquid, I decided to buy a copy of DAoC that included the best expansion ever, Trials of Atlantis. I just noticed that my timeline is a bit warped, seeing how SWG came out in July of 2003 and Trials of Atlantis didn’t release until October 2003 in the US. My discussion with the elfin bookie in Europe wouldn’t occur until after February 2004. It doesn’t matter, though; it happened the way I wanted it to happen. On with the story.

I went home with my future copy of DAoC and called my friends on the phone connected to a wall. The great thing about wall-phones was the mouthpieces. They had little holes in the plastic cover so your voice could be carried to the speaker. The great thing about having young kids and a wall-phone, was the juicy particles that clogged those holes. Parents have it easy these days; they just need to wipe the moist molecules off the slick screen. I can’t count how many times I saw a mouth engage with the wall-phone mouthpiece. 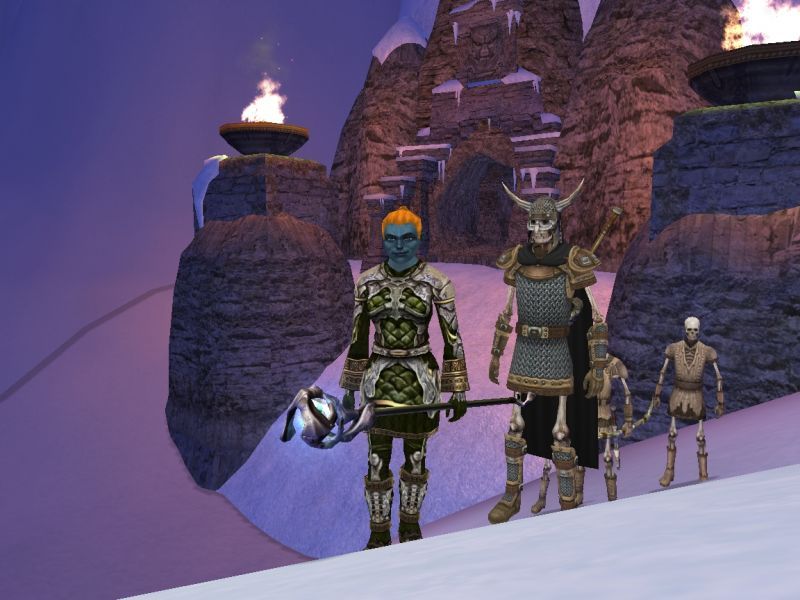 Talking to my friends, they confirmed I should join them as a Midgardian. On that day, a Bonedancer was made. I tried a few other classes, like a Skald, Spiritmaster, Ruinmaster, and Shadowblade, but none stuck, like the Bonedancer. I remember loading into the game for the first time. I was utterly confused for days. Back in those days, we didn’t have Wikis to help us, only our friends and bottles of tears. I do remember scouring the internet, and that is when I first found MMORPG.com. For real, I’m not just plugging this website. This was indeed the first website I found about MMOs. It blows my mind how many years this has been around. I also found a few tips about the game on this thing called paper that was bound and placed in a store, like a real store, not one of those magic online stores. I ramble…where did I put my keys? Oh, on my head next to my glasses.

Ahh, yes, DAoC! I remember the smell of the grass and the trees as I killed baby trolls in the starting area. My wife, at the time, made me put my computer in a closet so that I might have been lightheaded and imagining things. As a new Bonedancer, you don’t have many spells, and I assume I only had one skeleton minion to help me. I remember how challenging the game was and how long it took to level up. My friends told me about the importance of crafting and special spots to power-level me. I have fond memories of standing in this field as waves upon waves of enemies kept respawning on top of us. My friend used her level 50 Spiritmaster, while her husband used a bow-type character. Nobody really likes hunters except the weird ones. He was a bit of an odd guy and only liked to play hunters. You can’t trust hunter mains. 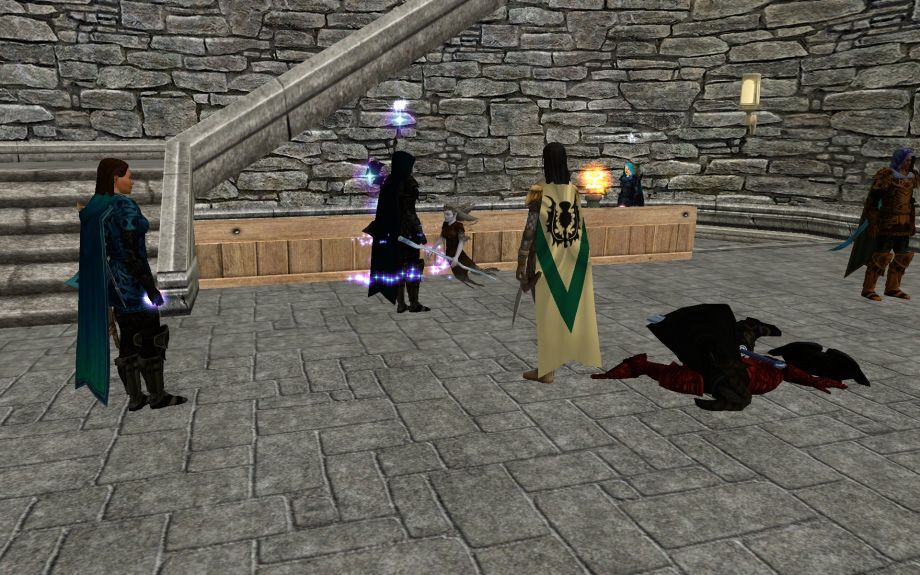 We spent hours and hours a day in that one spot, helping me get to level 50. I didn’t play the game long enough to get to level 50. I think I made it to level 48 before SWG came out, before I even bought DAoC. My fondest memories of DAoC were not the game itself but my friends. There was something about how brutal MMOs were back then that made you need to be with people and bond with them. While they were my real-life friends, I met many amazing people in the game. We didn’t have voice chat, so our friendships were based on typing interactions like on Twitter, but without Musk. People were great to each other. I knew this because the spot we farmed to level me was a popular spot. People would line up for hours for their turn. People would respect other people’s time and not hog that spot for too long. It wasn’t like a Black Friday brawl at Walmart over a fake $50 discounted TV. It was powerful how respectful people were to each other. This is why no classic server can replicate the memories of days gone.

As much as companies try to capture the nostalgia of old MMOs, they can’t because they forgot the most important part of the equation, the community. You can’t take the community of today and roll it back to the community of 2003 just because you roll back the game mechanics. People are who they are now, no matter how hard you try to capture their youth. While I have fond memories of skateboarding in the park with my friends, I have no desire to get on a skateboard again, even though I wish I could. I wish I were Tony Hawk. The MMO is the skateboard, and we are the old freelance writer reminiscing about how life used to be. It would be fantastic if we could all hop back into our old favorite MMO and ride it out like we were young again, but we can’t. Our memories are locked into the past, and today will never be the same as yesterday. 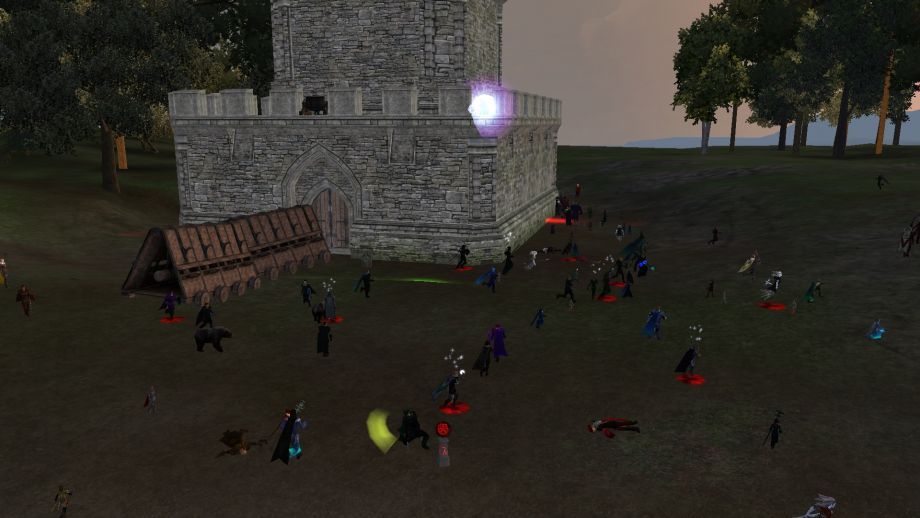 I’ll leave you with this: remember why you loved the game you used to love so much. Remember the people around you and why you had such a great time. Forget all the bad stuff because it does no good to you or others. Try to capture your love of the moment and keep it close. If that memory is today or days gone, enjoy it and hope tomorrow brings you a new feeling of joy that you can look back on with fondness.