On May 27, MechWarrior 5: Mercenaries (MW5) received its first DLC pack, The Heroes of the Inner Sphere. At the same time, developer Piranha Games patched in its Year One Update to the original version, expanded the availability of MW5 on PC to include both the Steam and GoG storefronts, and finally launched MW5 on the Xbox family of consoles. I spent some time with MW5 when it first launched on the Epic Games Store back in 2019, but with both the Year One Update and Heroes DLC incoming, it was time for me to once again jump into the cockpit of a 50-ton 'Mech and see if I could scrape together a mercenary unit that would last more than five minutes on the battlefield. What follows are my impressions of MechWarrior 5 Mercenaries - Heroes of the Inner Sphere DLC.

The Free For All

Before I get into the Heroes DLC, we need to take a moment to go over the Year One Update. As long as you aren’t still holding a grudge over Piranha Games’ decision to pull the plug on their original Steam release and go with the year-long exclusivity deal with Epic Games Store, you’ll be glad to know the platform expansion has cross-play on all systems. Even better, as long as the host of a co-op session has the Heroes of the Inner Sphere, the whole team can experience the extra content without having to purchase their own copy of the DLC. That’s a huge plus for anyone taking the Xbox GamePass route to play.

Beyond the platform upgrade, there is a dropship full of quality of life improvements in the Year One update. Right off the bat any veteran will notice the switch from the limited cone-shaped radar to a full 360-degree line of sight radar. Weather effects have been updated and extreme weather can not only affect your visual range but also wreaks havoc on your sensors. There are also some less noticeable changes like the AI-controlled pilots can now use jump jets; there is a big difference between use and use effectively. 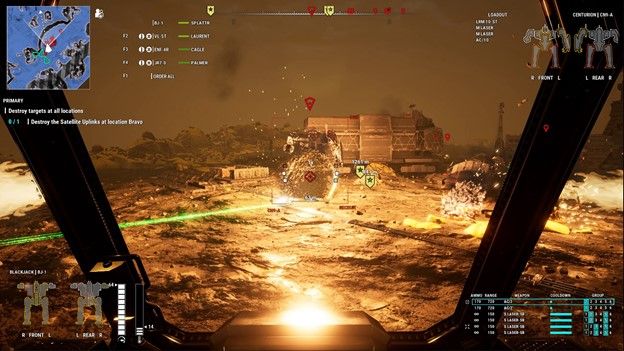 The update notes also mention a rebalancing of the difficulty level and economy. A seasoned player may be able to tell the difference between launch day and today, but I found my new start in both the campaign and the career mode introduced in the DLC to be just as difficult as it was the first time around. I was always short on cash, my pilots couldn’t hit the broad side of a barn, and salvaged 'Mechs always seem to cost two or three salvage points more than I have available. Of course, this all starts to clear up after the first few missions, but no matter how long I play I always seem to be low on C-Bills after every payday.

With the freebies out of the way, we can focus on what you really want to know about - The Heroes of the Inner Sphere DLC. At just $20, my first thought was Piranha Games was going to give me a lot of bang for my buck. It didn’t take long for me to realize this was one mercenary contract that wasn’t going to pay for itself.

3,000,000 C-Bills, a handful of ‘'Mechs, and the desire to build the best mercenary company the Inner Sphere has ever seen. That’s what you start with when you choose the new career mode, one of the big additions introduced with the Heroes of the Inner Sphere DLC. It turns out starting in career mode isn’t all that different from the beginning of the campaign mode. The biggest difference here, besides the reduced emphasis on the ‘dead dad’ storyline of the campaign, is the choice of your starting location within the Inner Sphere.

All six locations - one for each of the six major houses - place you in an industrial hub, just a jump or two away from your first warzone. To help give you a jump start on your career, you also start with three pilots and four 'Mechs, allowing you to bring a full team of four on your first mission. The quicker setup doesn’t necessarily mean you have an easier start. Your team is made up of novice pilots, and having more 'Mechs on the battlefield means you will start bleeding those 3 million C-Bills faster than you can say repair bill. And let’s not overlook the fact you didn’t get to handpick your pilots; you’re probably spending C-Bills on pilots you won’t be hanging on to for the long haul. At best, the new start in career mode just means you are skipping the first couple of ‘rebuild the team’ missions you had in the campaign and are doing so with a whole new set of issues to overcome. 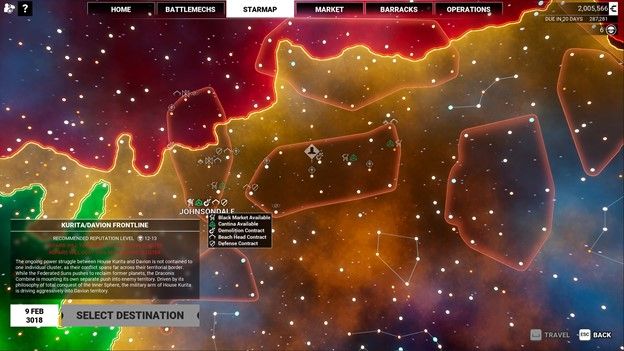 It’s bigger than before. Is it better?

There are a few differences between the available starting points in career mode. One of the most noteworthy changes comes when you pick the Free Rasalhague Republic as your starting point. While all the other starts begin on a five-house map set in 3015, the FRR start has you beginning your career in 3035, giving you access to all of the updated tech of that time. Each of the six starts also comes with its own set of 'Mechs, though there isn’t really enough diversity between the groupings to make any single choice stand out from the others. In the end, you may as well pick whichever house interests you the most and start there.

My biggest takeaway from the new beginning? It really doesn’t change things up from what we already had with MW5. There are thousands of star systems in the Inner Sphere, so I am surprised Piranha Games didn’t capitalize on the sheer size of the map and offer more than six starting areas. Players are warned that ‘career mode is an open-ended sandbox experience meant for veteran players,’ so why not give those veterans more significant options? One option could be starting locations near higher-level conflict zones for anyone tired of breezing through the first few missions. Or better yet, give more customization options on starting pilots and 'Mechs, possibly giving players a set amount of cash and letting them choose whether to pay the price for more experienced pilots, beefier 'Mechs, better weapons or simply stash away some of the cash for a rainy day. These are the type of things developers do to spice things up when their game has been on the market for a while.

All The Shiny Bits?

One thing I expect out of any DLC is more of what I already got in the original. For MechWarrior 5, that would mean I want more 'Mechs, more guns, and more worlds. Does Heroes of the Inner Sphere fulfill that request? Eh, sort of.

On the more worlds front, Heroes of the Inner Sphere is, well, bigger. The map is bigger, with more star systems to hold more missions. There are more industrial hubs to visit as you scour the galaxy for rare 'Mechs and good pilots. And of course, there are more warzones where you can find employment. There’s a new biome, Extra Solar Moon, so you have that to look forward to the first couple of times you see it. And there is also a new procedural mission, Beachhead, which is just like any other search and destroy mission with the addition of artillery fire to dodge. 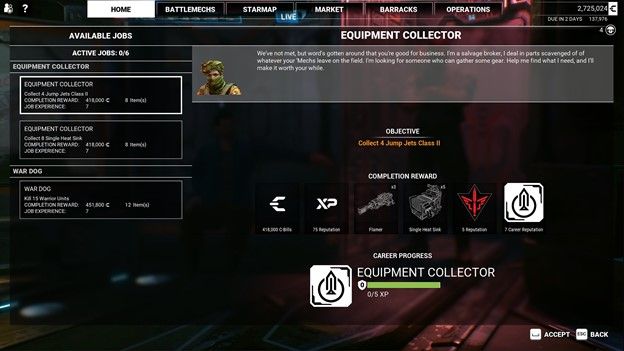 Then there are the Cantinas. Pitched as the way to pick up new Career Paths, Cantinas are where you head to get extra jobs from the ‘Inner Sphere’s shadiest characters.’ That translates into taking on collection quests from the junk collectors of the galaxy. Collect 10 machine guns, kill 5 Locusts, pick up a hidden stash during a mission, that sort of thing. In return, they will reward you with some cash, some rep, and some points that unlock five linear perk paths. The perks are nice, but this isn’t a game-changing mechanic, it’s a very simplistic upgrade tree.

This same level of mediocracy is found in the list of new weapons and equipment in Heroes of the Inner Sphere. Four new weapons (chem laser, short burst laser, 'Mech rifle, and stream SRMs), electronic countermeasures, BAP (radar that can detect enemies not in line of sight), and superchargers? Really? That’s what we get? All of those sound like Day 1 inclusions, or at least equipment that didn’t make it into the release but were added in a subsequent patch. Nothing on that list comes close to changing the tide of battle.

I’ve saved the worst for last - 'Mechs. The Heroes DLC packs in a paltry 7 new 'Mech chassis. Sure, Piranha Games touts 50 new variants, but how is that a positive? Every time I come across a potential ‘Mech to add to my collection, all I can think about is how it isn’t the one I am looking for. And while the additional Hero ‘Mechs add some extra lore into the MW5 experience, they are nothing more than overpriced variants with cool-looking paint jobs. 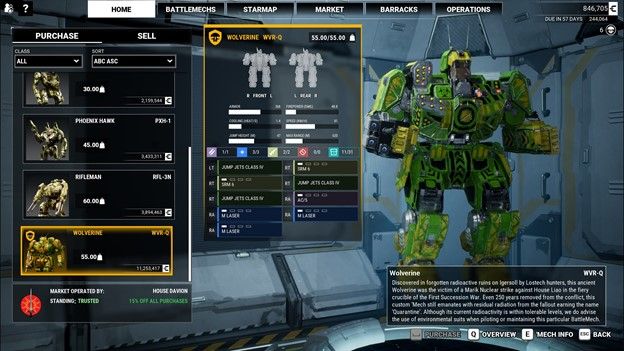 Hero ‘Mechs are cool. Now let me build my own ‘Mech of legend.

Do you know what would make the Heroes of the Inner Sphere worth $20? The FrankenMech. Not the Corsair chassis that is included in the Heroes DLC, but a true FrankenMech. Let me take the salvaged ‘Mechs I’ve earned in battle and chop them up and reassemble them however I want. That is the type of reward system that would keep me tinkering with my creations, mixing and matching pieces to see what horrible atrocities I could take into battle. I want my unique ‘Mech to be the next Hero ‘Mech, a beast of legend. The FrankenMech would make the Heroes of the Inner Sphere worth $20?

Where Heroes of the Inner Sphere fails is in giving us something we should be paying for. We are getting a handful of weapon variations, superchargers, and other equipment that is nice to have, but none of it is worth writing home about. The new ‘Mechs are underwhelming and could easily be skipped. The Cantina and Career Mode are also nice additions but are hardly game-changing mechanics. Everything Piranha Games is asking $20 for are things games like No Man’s Sky or Path of Exile are giving away for free.

If you are finally buying MW5 because it just released on Xbox or Steam, grabbing the Heroes DLC is no-brainer. $50 is a fair price for a complete game, and when you add the DLC to the core MW5 experience, that is exactly what you are getting.

For a casual player that has already played the main game, the decision to pony up $20 may be difficult. If you find any of the new 'Mechs interesting, then it could be worth the buy. Otherwise, the limited starting locations and new weapon variants and superchargers may not be worth it. The rest of what you get - the Cantina perks system, Hero 'Mechs, and Beachhead missions - well, that sort of stuff should have been included in the year one update.