Marvel’s Avengers recently released patch 1.3 that was slated to fix at least one thousand issues, including several that prevented players from progressing in the story mission and some additional Avengers Initiative mission chains. It also added some new content, the Mega Hive. In the aftermath of the patch, we’re left wondering, with so many “fixes” why are things getting worse?

I’ll give credit, where credit is due, some fixes relating to story missions were fixed, but a lot of issues that were considered handled were not. Beloved exploits, in some cases, such as the respawning Elite Enemies, were patched out, game hacking, which includes infinite resource generation and in some very explicit cases, gear editing, is rampant and demoralizing and left untouched. While I could run down a hot list of every issue that Patch 1.3 said it would fix and didn’t (enemies getting stuck behind walls, elite heroic hive missions rewarding level 1 gear, matchmaking still not working properly) the problems with Marvel’s Avengers run far deeper than bugs not being squashed timely.

With the release of the Mega Hive, players have been, once again, welcomed to Crystal Dynamics elevator pitch (pun intended) of end game content. Prior to patch 1.3 the Elite Heroic Hive was essentially the pinnacle of end game. A 14-floor daisy chain of missions, with difficult modifiers, where you eventually descend to a climactic, more difficult boss battle. The 14 floors are repetitive, and the rewards for completing the Elite Heroic Hive are inconsequential, with players ingratiated to only the tiniest sliver of a chance that you may be rewarded with an, often lackluster, exotic gear piece. More often than not, you are lucky to obtain even a legendary item as a reward, despite the guaranteed rewards for completion show as a gold specialty gear piece on the mission screen.

The Elite Heroic Hive seemed to be a futile exercise in masochism, as the more I ran it, the more I realized I was wasting my time. It didn’t matter if I ran it on Challenge 2 (Normal) difficulty or Challenge 4 (Brutal) difficulty. It didn’t matter if I completed it with a 3 Star Rating or a 5 Star rating. Nothing I did seemed to change the poor rewards, and the realization that there was an absence of any real accomplishment. Then, Patch 1.3 hit and the Mega Hive introduced us to all the same repetitive gameplay, with higher stakes, similarly poor rewards, and a complete lack of intriguing end game direction -- but this time it was also time-gated! You can only run the Mega Hive once per week, not that I would wish that hell on anyone multiple times.

Where the Elite Heroic Hive is 14 floors of repetitive gameplay, the Mega Hive is 40 floors or more of repetitive gameplay, broken up into 8 smaller, 6 or more floor missions. Players must utilize their entire roster to complete the Mega Hive, meaning, if a character dies, that character is no longer usable, you restart that floor of the Mega Hive, and you have to select the next character in your roster. The experience of losing a character you were hoping to earn gear for in the end, is heart wrenching, and due to the nearly unusable defense strategies for most characters, on nearly all difficult content, most of the enemies enact a “one and done” hit policy on the toughest difficulties, even if you are well geared with high defense.  Undoubtedly, this was done to encourage players to build each character in their roster, but with RNG being as poor as it has been, and daily missions being completely bugged, resulting in nearly zero polychoron (end game materials) generation, many players aren’t exactly equipped, nor are they excited to tackle such punishing content.

The Mega Hive in general just points to a complete lack of unique game design principles. We started with a 7 floor hive, then a 14, now a 40, and we went from regular, to Elite to Elite Heroic, all the while never really discerning what the point of these increased difficulties of Elite and Elite Heroic accomplish, or why the actual difficulties of Challenge 1 (Easy) through Challenge IV (Brutal) even really exist, when rewards aren’t scaled on the actual difficulties. Why even have challenge ratings at all? Especially for these premiere and priority missions, where difficulty is largely predetermined, and even easy enemies can kill you in a single attack.

If we have Hulk pick up the entirety of the rehashed level designs, poor rewards and repetitive gameplay of the Mega Hive and set it aside, we’re still left with one humongous, glaring flaw. The Mega Hive and the Elite Heroic Hive are both SINGLE PLAYER. Speaking poignantly, even the Elite Heroic 14 floor hive on normal mode can take a player about 45 minutes to an hour. A 40 floor Mega Hive can take a player upwards of 3 hours, and if all of their characters die, they start over from the FIRST FLOOR. The perpetuity of single player only content only exacerbates the poor, repetitive designs and worthless RNG rolls that plague every facet of the game. 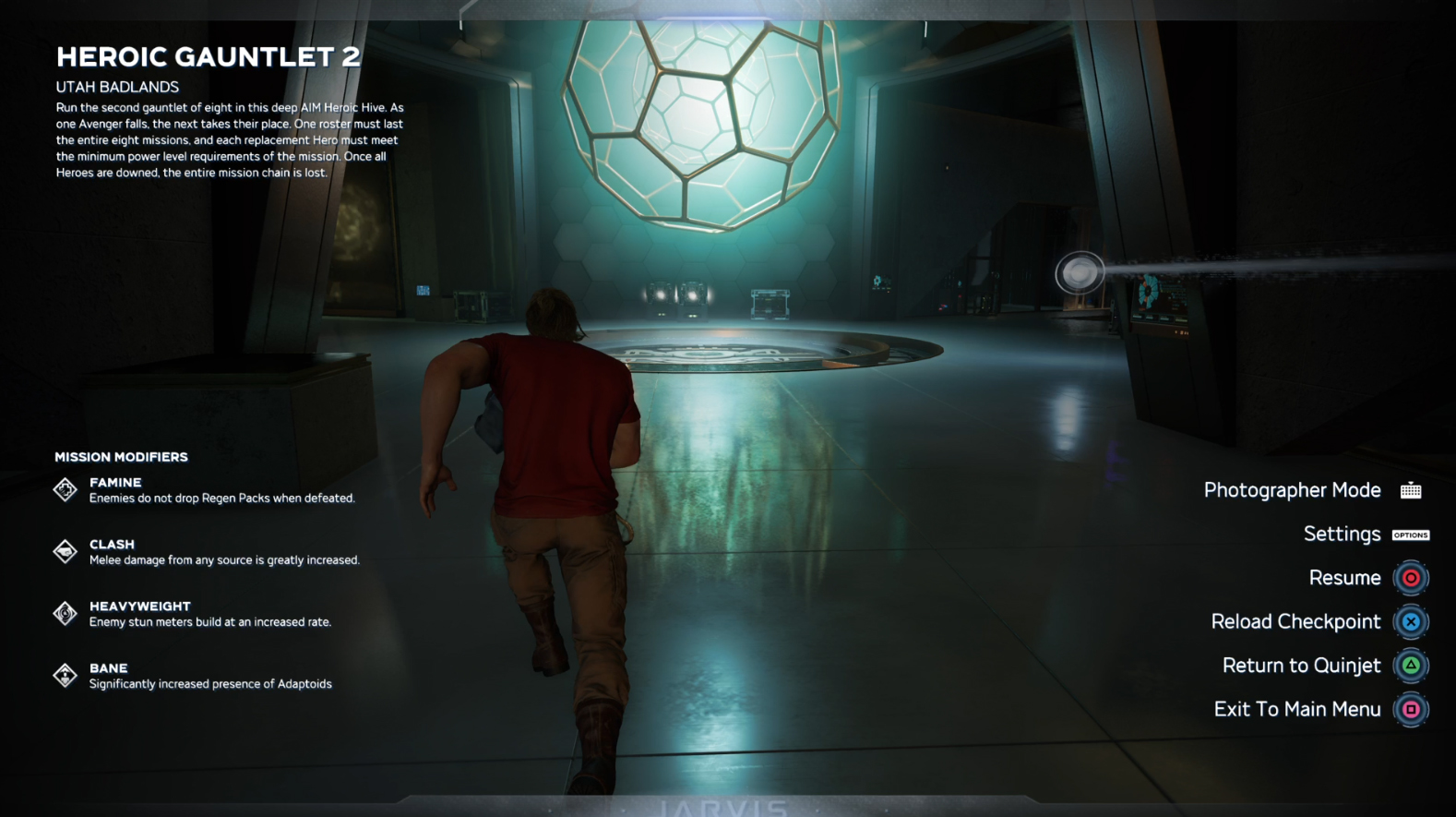 The design flaws in the Mega and Elite Heroic Hives are so stark, that even if all of the 1000 fixes they put in place, were done properly and no other bugs existed, the content would still be so lackluster, monotonous, and poorly planned, I would be flabbergasted to believe this was their initial vision for release ready, end game content. With the first multiplayer end game content still on the horizon, the AIM Cloning Lab is truly the last beacon of hope for any interim content to hold players over until an influx of new characters hit the scene. The story, characters and world of Marvel’s Avengers is still, in my opinion, worthy of the initial purchase, but the looter grind hence, as been nothing but a letdown. As optimistic as I would love to be on new, multiplayer only content becoming available, from what I’ve experienced during the first beta test, all the way until today, I have little confidence that the new gameplay mode will be bug free, or in the case of dedicated rewards, worthwhile for the Marvel’s Avengers players at large. 'Nuff said.