Magic: Legends launched in Open Beta earlier this week, and with it brings the card game’s multiverse to the PC ARPG. We covered how the ARPG itself felt in a preview last week, but now that we have had a chance to go hands on ourselves in a live setting and check out the progression naturally for ourselves, how does the early hours of Cryptic’s take on Magic: The Gathering fare?

At first glance you might be forgiven for thinking that Magic: Legends is simply just Diablo with a Magic skin. And sure, it makes sense. Diablo literally created the ARPG genre, so there is always going to be those comparisons. However, Magic: Legends introduces some unique elements to the formula thanks to its tabletop roots, namely in how skills and combat works.

Unlike other ARPGs, combat is done through a combination of skills and cards. Your Planeswalker – powerful beings from the Magic multiverse – has some base skills designed around their mana-archetype, such as the skeleton raising skills of the Necromancer. However, that is only one part of the formula. You’ll also spend your time building a deck of 12 cards that act as combat skills in game.

Sorceries such as the Red mana Shockas well creature summons like the Blue mana Water Elemental creature spell find their way into the game, rooting it overall in the tabletop game for fans of Magic. You’ll spend your first 90 minutes or so in Magic: Legends trying to help the Planeswalker Ral Zarek chase down a mysterious walker who stole a device from the Izzet mage. Along the way, you’ll meet other iconic characters like the green-mana aligned Nissa Revane (who seems to be doing her best Gideon Jura impression), as well as travel to familiar planes like the wild, alive nature of Zendikar.

The pacing feels rather slow, if I’m honest. Either it’s the character’s move speed, or simply the pace of the tutorial, it all felt a little sluggish. Additionally, Magic: Legends doesn’t clearly convey the mechanics it’s trying to teach you. When I got to my very own slice of the Nicol Bolas-esque meditation realm and learned spell upgrading, I was still clueless as to exactly how it’s done. I couldn’t understand why it was teaching me about spell upgrading, but then telling me loadouts and my deck were locked. I still don’t get it even after the fact.

It doesn’t help that the UI, especially on the controller, doesn’t feel the most navigable. Oftentimes when I go into the menu, I find myself defaulting to mouse and keyboard to navigate. When entering and exiting the menu on the controller as well, naturally you’ll want to hit “B” in order to leave the menu, like the vast majority of controller-enabled games allow you to do. However I’m oftentimes finding myself spamming the button and then getting frustrated when nothing happens because you have to press start again in order to exit the menu itself. It’s almost as if Cryptic expects that those sitting at the computer will just pick up the mouse and keyboard to navigate the menu - though this doesn’t help (eventual) console players or those using their PC in a living room hooked up to a TV.

I'm also not a fan of the camera. While you can move it freely around your character, you can't zoom in or out. I also don't like the placement of where it follows you, as I find I can see more of what's behind me rather than in front of me at any given time. There have been a few times in missions where something is happening, such as a hedron activating on Zendikar, where I just didn't feel like I really saw what was going on purely because of where the camera was placed.

These issues aside, it’s not all bad. Progression, while slow, attempts to drip feed the different spells and deck mechanics at a pace to not overwhelm players, especially since it can’t be assumed everyone downloading the beta has played the card game. Concepts like mana costs, enter-the-battlefield effects and more need to be given to players at a pace to really understand how they all play together.

Once I got the hang of my starter deck (Blue MindMage, btw), I really started to have some fun. Finding the synergies, such as summoning an Alchemical Thamaturge and reaping the reward of the sorceries in my hands costing 25% less mana is huge in massive fights. Being able to spend cards when I have an Academy Wizard to get the card draw benefit of creating 1/1 Illusion creature tokens bolsters my army of creatures even more. Creating these opportunities and learning how my spells interact with each other reminds me of core Magic, a game I’ve played since the 90s.

It’s interesting how the team at Cryptic has been able to translate some of the mechanics of Magic: the Gathering into Legends as well. Control magic in the table top version relies a lot on unsummoning, countering and just overall dictating the battlefield till you can get your giant threat out and win the game. This is how I love to play Magic myself.

Selfishly, I’m a bit upset at how counterspells and unsummons don’t translate well in a game where you need to also deal damage and kill enemies. But I do like how Blue magic (which is what I have most experience with thus far in the beta)  feels like your traditional crowd control you see in MMOs and ARPGs. Rooting enemies, putting them to sleep and synergizing effects with spells like a Teleport Strike which deals extra damage to creatures makes me feel like I’m playing traditional Blue control.  It’s a lot of fun to play around to find what is effective, which like I said before, feels like Magic.

What also feels like Magic is how it's monetized. Magic: the Gathering is a notoriously expensive hobby. Cards can sometimes sell for hundreds of dollars, with competitive decks running thousands. If you want to be at the top, chances are you’re dropping a large stack of Benjamins to do so.

Magic: Legends is a free-to-play game, so there is no barrier of entry to enjoy the ARPG. However, it has what all free-to-play titles have: microtransactions. These items range the gamut from cosmetics to gameplay boosts, including items that increase the output of rewards you get from completing missions to a new hat your Planeswalker can show off to the locals in Gavony.

Magic: Legends also features loot boxes booster packs, which the obvious correlation here are the packs you buy and crack in paper Magic. These packs can confer items you can buy in the store, in-game gold, as well as the chance to earn, at the time of this writing, a new Planeswalker Class, the Dimir (Blue/Black mana alignment) Assassin.

Players on Reddit have not taken the microtransactions in Magic: Legends lightly, with many blasting the ARPG for locking a class essentially behind a loot box – one that doesn’t actually show clear drop rates and percentages. The class is available on the player market,and while the prices on the exchange aren’t set by players but rather an algorithm it still feels ridiculous. Right now, the Dimir Assassin class is being sold for 8 million in-game gold (last night it was upwards of 12 million gold). It’s an absurd amount, especially three days into the Beta. 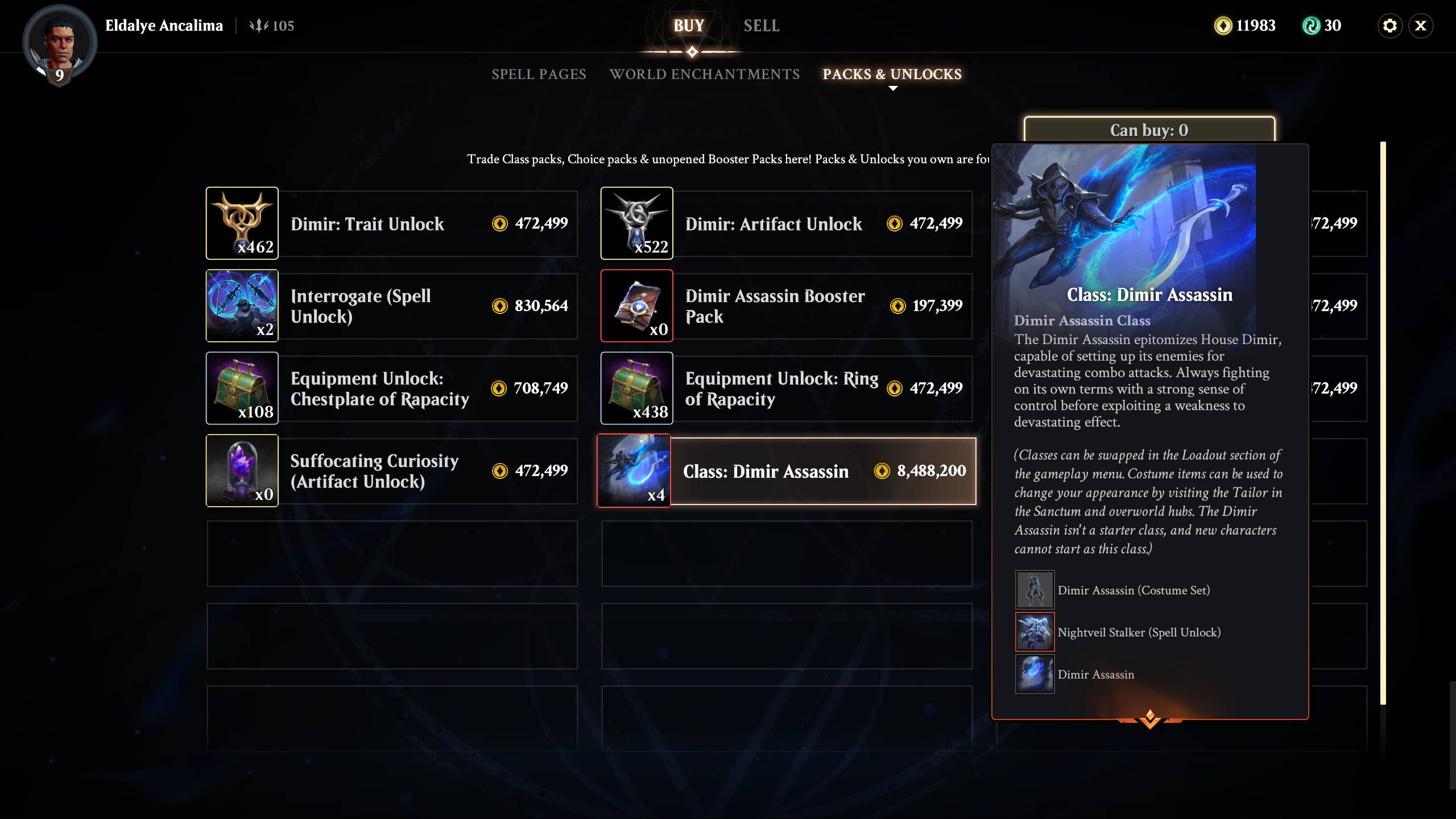 For an open beta, the amount of monetization in Magic: Legends at this point is frankly overwhelming. Hell, it would be overwhelming at a true “launch.” Between the booster/loot packs/boxes, reward and experience boosts to help get players over the hump in the grind , as well as charging for character renames the vast majority of players won’t see, it’s outrageously overwhelming.  Legends is even selling deck slots to allow players the chance to really leverage what makes Magic: Legends interesting: multiple deck types. As a result, Magic: Legends is being called a cash grab by players both in the in-game voice chat and on Reddit, leveraging the IP and the genre to make a quick buck. I don’t personally feel this is the case, but it’s not surprising to see the thoughts floating out there both on Reddit and other sources.

And it’s a shame that the monetization model is overshadowing what is good at its bones: an interesting take on the ARPG genre in a beloved universe. Instead of being able to just focus on the different deck building strategies and melding planeswalker types with different decks to figure out what is best for me, the monetization cannot be ignored. It’s frankly too much – especially for a game that is technically being called a “beta.”

And we really even haven’t gotten to the battle pass or its premium/paid tier.

As far as the beta aspect, expect the performance issues and optimization problems most betas (and let’s be real, live fully launched titles nowadays) deal with. EU players have had an even harder time with the lack of dedicated servers, so the lag there has been unbearable.

Monetization and performance issues aside, I do like the bones of Magic: Legends. As I’ve said a few times in this article and in my previous write ups, Magic: Legends feels like Magic in its best moments. Learning the synergies of my spells and deploying them to combat a threat in front of me feels like the interactions I would have sitting at the kitchen table staring down my nephews stupid artifact deck. (I’m not bitter about all the losses. Nope). I love the world of Magic’s multiverse and being able to travel the streets of Innistrad or see Benalia for myself has been rather awesome as a long-time fan. My mind is already going to imagine where Legends can go next. To Ravnica? Will we see Amonkhet and the Hour of Devastation? Take part in the artificer fair in Kaladesh?

There is so much potential here with both the core mechanics of the ARPG as well as the IP that it pulls from. Questing with the Gatewatch, helping Tharn on Dominaria, dealing with – or siding with – Nicol Bolas in the War of the Spark story arc. I was giddy when I met up with Squee the Immortal in Shiv. Moments like this really make me want to dive back into Legends to interact with characters and worlds told only through the artwork and stories of the card game before this.

My only hope is that Cryptic listens to the feedback of their fans and adjusts before opening the ARPG up to the wider audience with the console launch. Right now is the time, since this is a beta, to tweak and make sure Magic: Legends is in the best position possible to succeed long-term. Because the bones of the ARPG and the depth of the deck-building combat could open up so many good stories and encounters in the Magic multiverse.

We've still got a ways to go before really diving into some of the later game encounters, as well as being able to mix and match more decks with Planeswalker types, but we'll have more impressions in the coming week.