I want to enjoy myself in The Lord of the Rings Online's "mini-expansion," War of Three Peaks, but I'm finding it hard to parse the content itself with all of the controversy surrounding its release. Since it was announced, War of Three Peaks has had one central question looming over its head: "Why is what by all accounts can be summed up as a normal content update being charged like an expansion?"

This question has both dominated the discussion on various websites such as ours, even the official forums and Reddit. It's the first thing a few of my Kinmates brought up when we dove into what we thought of the content earlier this week. What exactly differentiated the mini-expansion versus the regular content updates LotRO players are used to?

After about a week playing the new Elderslade zone, I'm not sure I can find anything that really answers that question.

Elderslade looks beautiful - the work the developers have done to continue the aged, broken look of the Dwarf lands in the North just continues to astonish me. I've fallen in love with the Dwarves thanks to Standing Stone Games' recent push into highlighting Durin's folk more in recent stories, and Elderslade continues the beautiful bleakness that evokes the sadness, yet stregnth of one of Tolkien's most iconic races.

Gundabad in the distance dominates the skyline, showcasing the power and craft of the Dwarves of old, and it makes me excited to see the Mountain-home later on in future expansions. However, once the awe of the Dwarvish lands wears off, I'm left wondering, "What is so special that would cause SSG to charge VIPs/Lifetime players?"

Even diving into the new feature that War of Three Peaks brings with it, Missions, doesn't provide the answers myself and many others are seeking. Missions put you in an instance with the premise being that you're assaulting Gundabad to help establish a beachhead for the eventual Longbeard assault. They remind me of the old Skirmish system, which begs the question: Why isn't this the Skirmish system?

Skirmishes were great when they released, providing some awesome repeatable content for your friends, or even solo. The companion system included in the Skirmishes made even the lowliest of Hunters, like myself, feel like a Captain. Skirmishes though seem to have been fallen by the wayside, and Missions may not be a direct 1:1 replacements, but the fact that a whole new instance-based mission system was built out, when many feel it could have been made as an improvement to the Skirmish system makes you wonder what is going to happen to the latter moving forward. It also makes me wonder if Missions will have any long term staying power beyond War of Three Peaks. 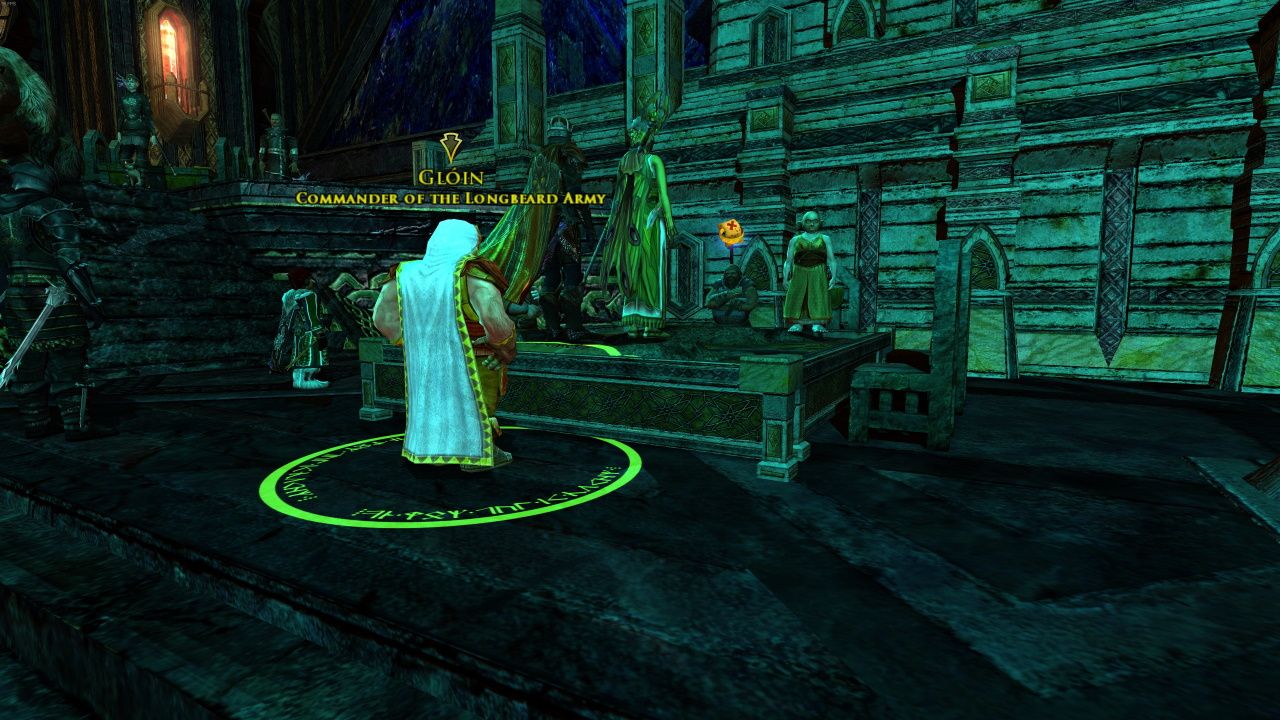 Mission quest givers, as well as a nostalgic Dwarf

The Missions themselves are rather fun, though. They can be completed in 5-10 minutes if you've got skills, though some have taken me a bit longer as I'm not the best Hunter on Arkenstone. The Missions feel as though they are definitely geared towards providing a narrative set-up to the eventual Gundabad-based expansion. They're fun - and a few give a stealth feel for a class with little stealth (such as sneaking up behind Gundabad orcs and dispatching them instead of attracting the whole garrison.

The fantastic narrative of the Durin's folk that has been ongoing for a few months picks up here too with Prince Durin himself in Elderslade. But it's here where I feel like the "mini-expansion" feel falls flat on its face. A new zone, with an instance and a raid have, as well as the continuation of the epic storyline, are all hallmarks of a regular content update. War of Three Peaks doesn't feel like an expansion, pricing notwithstanding. What exactly is here that justifies denying VIP players one of the key benefits of subscribing?

The fact that the content isn't available yet for LotRO Points as well feels greedy. Instead of letting players use the in-game currency they've either earned or paid for (or built up thanks to the benefits of being a VIP or Lifetime subscriber), Standing Stone Games feels like they are starting to view their less like consumers and more like wallets to pry open. The different versions of War of Three Peaks are differentiated by cosmetics and boon items alone - and even then the different cosmetics and mounts just don't feel worth the high cost for what overall feels like just a regular content update.

Couple this with the fact that server performance just doesn't feel smooth - the amount of times it's felt as though the server was 10-15 seconds behind my game client would be laughable if it wasn't so common. Frame pacing is al over the place to the point where even running the 13-year-old game on a 9th Gen Intel processor and an Nvidia GeForce RTX 2080 even with a GSync monitor, it makes me wonder whether or not charging loyal customers who have paid sub fees for years was the right move. 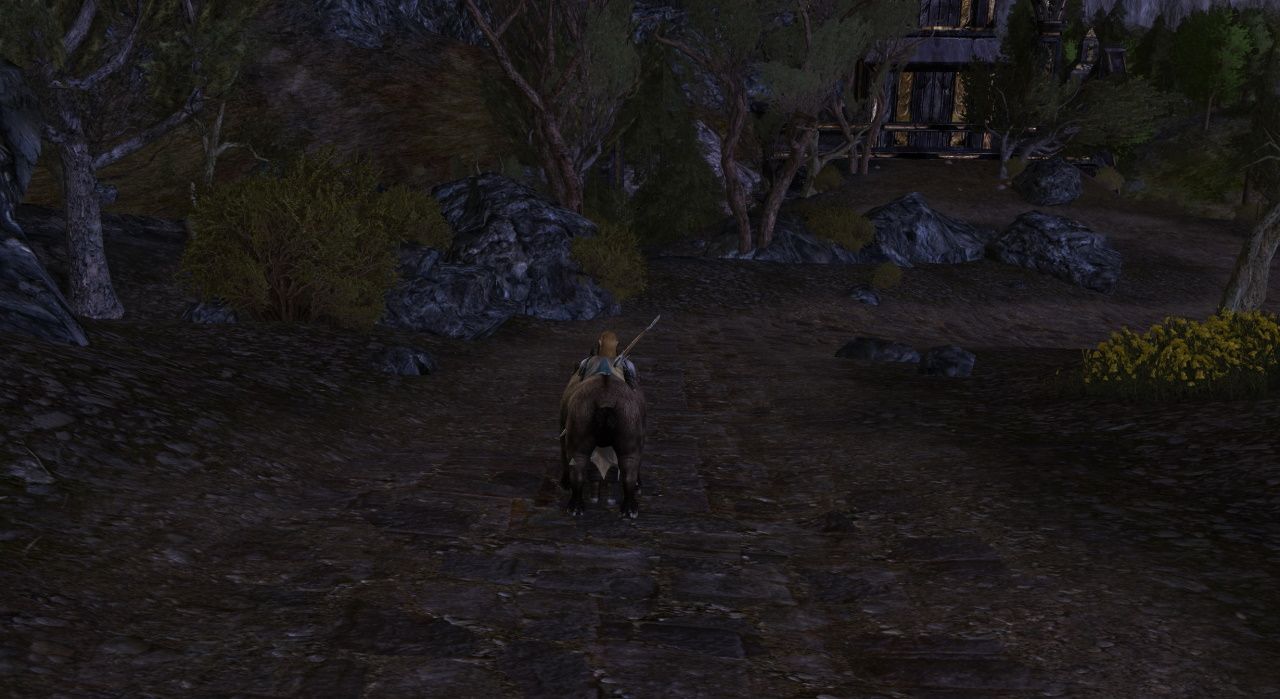 Seriously, seemingly every time I mount up this happens for at least 5-10 seconds

There are plenty of players too who are more than happy to pay for the $20 fee, regardless of whether they have, to this point, paid over $100 in sub fees for the year. But even then, for those fans who aren't willing to, seeing a bundle like the Ultimate Fan Bundle sell the quest pack that in any other circumstance would be  regular content update, feels questionable. There is no item to level boost for those who just started out and want to jump into the content, though the Missions do let you start at level 20 (there is a stablemaster in the stronghold where Missions start to help get people there), and the Virtue XP boosts you get are negligble at best, especially for higher leveled players. The cosmetic items as well feel incomplete - I honestly thought I accidentally threw out half the costume till I realized you were given literally half a costume in the pack: no gloves, cloak, shoulders included in the wardrobe.

The zone itself, while interesting and definitely sets up Gundabad as the next major location of The Lord of the Rings Online, doesn't feel that much more substantial than Evendim, Wildermore, The Great River or any of the other regions added as regular content updates.

This is all draped in the backdrop of a studio that has seemed unwilling to talk to its fans of late, especially when real issues have plagued Standing Stone Games' servers, or even to tell fans what exactly the differences were between the different versions of this "mini-expansion." When the servers had some of their longest downtime earlier this year the team at Standing Stone Games was mostly silent, not disclosing what exactly caused their servers to be unavailable for over a week. Then the announcement of this "mini-expansion's" pricing model juxtaposed on top of the server issues felt completely tone-deaf to consumer's real concerns.

Even then, players didn't know what was in the extra expensive versions of the expansion until the day it launched. Then whe the content did release, it did so in a buggy state. I still see players on Twitter, Reddit and the Forums say they can't buy War of Three Peaks even a week later.

So I find myself torn as to what to think of this "mini-expansion," and I can't help but be disappointed overall with what's on display. And the sad thing is that my disappointment has nothing to do with the content itself at face value - in any other circumstance I'd be very happy with Update 28. The Missions are fun, though I do wonder why the Skirmish system wasn't just improved instead of building out a whole new system. The region of Elderslade continues building upon the great world building of the recent foray into the Dwarvish north of Rhovanion.

But when you surround the "mini-expansion" wth all of the external issues - a buggy launch, the feeling that the "mini-expansion" was nothing more than a cash grab by an unattentive studio. With the general lack of communication regarding real issues facing The Lord of the Rings Online, it makes me really tentative to continue my journey towards Gundabad, and I feel for every VIP and Lifetime player - loyal and outstanding customers than any MMO in 2020 would LOVE to have. I feel for every single one of them who, after buying this content and seeing what it is - just a regular content update we've seen for 13 years - felt burned by a studio they have given so much to over the years.

Yes, companies need to make money, no denying that. But with all of the confluence of issues surrounding War of Three Peaks, LotRO's "mini-expansion" just feels like the wrong way to do just that.

Full Disclosure: Code was provided by PR for the purposes of reviewing the content.