I'll admit it: when I first walked into Gundabad in the latest Lord of the Rings Online expansion, I wasn't that impressed. Sure, the towering walls and crumbling ruins made for an imposing sight, but the first impressions weren't nearly as strong as walking up the steps leading into the Great Delving in Moria a decade ago.

However, the more I explore Gundabad in Fate of Gundabad, the more I'm finding myself in awe of what Standing Stone Games has built.

It shouldn't be surprising, either. In the last five or so years, the team building the iconic settings of Middle-earth has recreated some of the most celebrated locations in fantasy. Minas Tirith, Minas Morgul, the Black Gates of Mordor, Dol Amroth - all scenic locations and giant cities and regions in their own right.

In fact, one of the aspects The Lord of the Rings Online has always done well is in its region design. The Shire feels like an idyllic farm setting, removed from warfare where the most pressing issue is whether or not there will be enough ale at the Green Dragon this evening. Orthanc is war-torn, but imposing, standing tall in the Ring of Isengard amidst the battles that raged below.

Minas Tirith had the correct walls on the outside, thankfully. But the tiered city that screams Tolkien is also incredibly well-built and a triumph in its own right: a constant reminder of the skill at play at SSG.

So when I began exploring Gundabad, all of this came back to me. It makes total sense the scale of Gundabad would feel like - and in some cases eclipse - what I saw in Moria back in 2009. I remember standing in the Twenty-First Hall, incredibly awed by the massive columns that reached up into the gloomy ceiling above me. 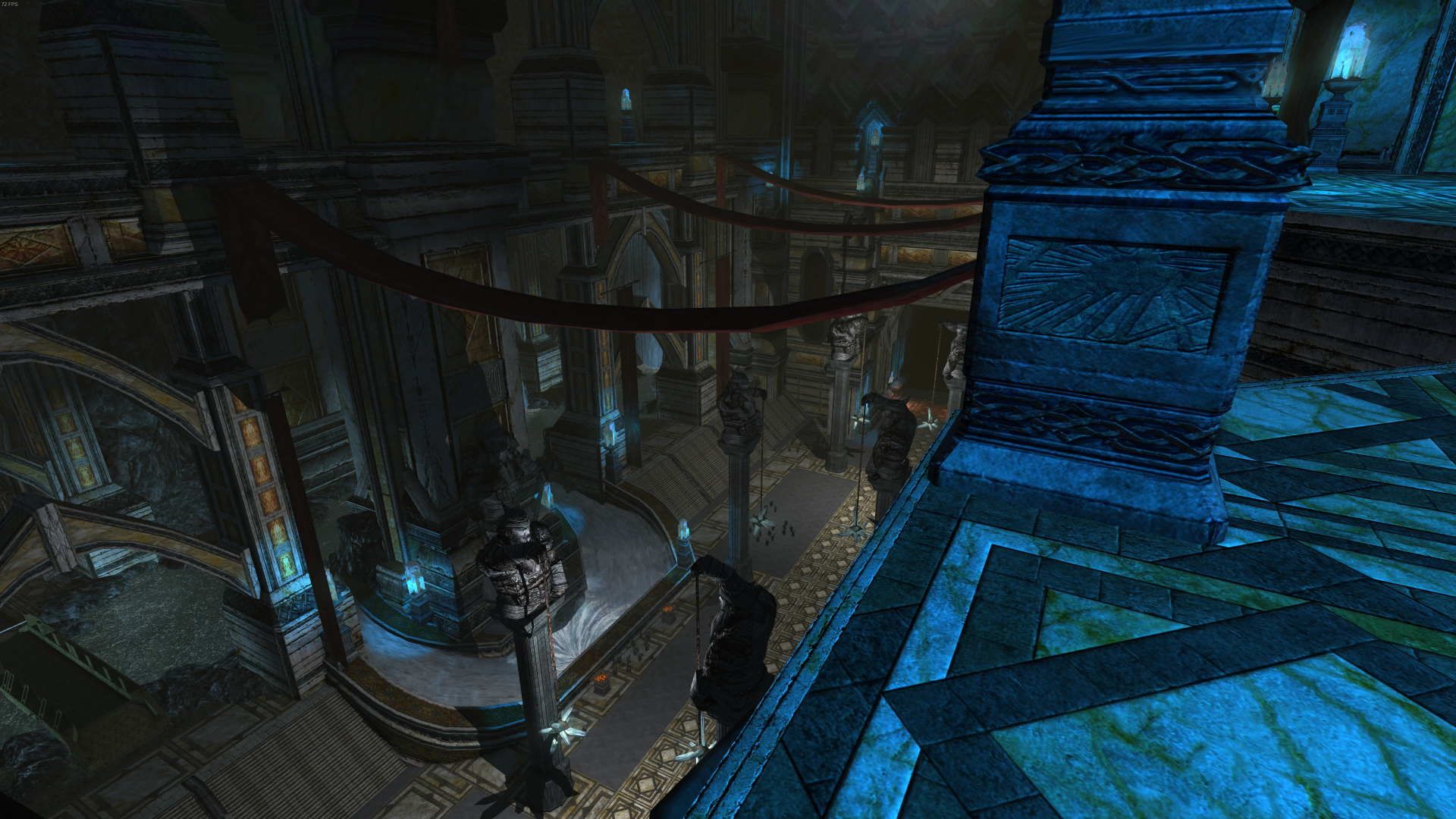 However, when I revist the area, it doesn't feel nearly as impressive as it once did. It still holds up, and Moria is a fantastic zone in its own right even today, but Gundabad shows takes everything the team at SSG has learned over the decade and applies it, while also retaining the Dwarvish feel that the last few years of content updates have provided.

Standing in the Hall of Vernozal, watching the waterways rush on the right side of the room, I couldn't help but find the exact right spot for a screenshot. It was so impressive, so beautiful an area that I had to capture it to share with friends later. I've had this urge come up multiple times, such as taking in the giant crystal torches adorning the Deepscrave or the giant Dwarvish busts on the walls of Mattugard. The glittering rocks of the Stonejaws twinkle as I run past them killing Hobgoblins, reminding me of the jewels and wealth the Dwarves once wrought here.

It's a maze, like Moria was, but it's one that feels a bit easier laid out - almost as if the team learned from the labyrinthine layout of the former mine and made sure to echo it here, but not replicate the experience. That said, I would love a new map - at least something that tells me what level I'm on. This would have come in handy during my questing around the Deepscrave, especially as quest markers on the map also don't tell you what level they are sitting at. 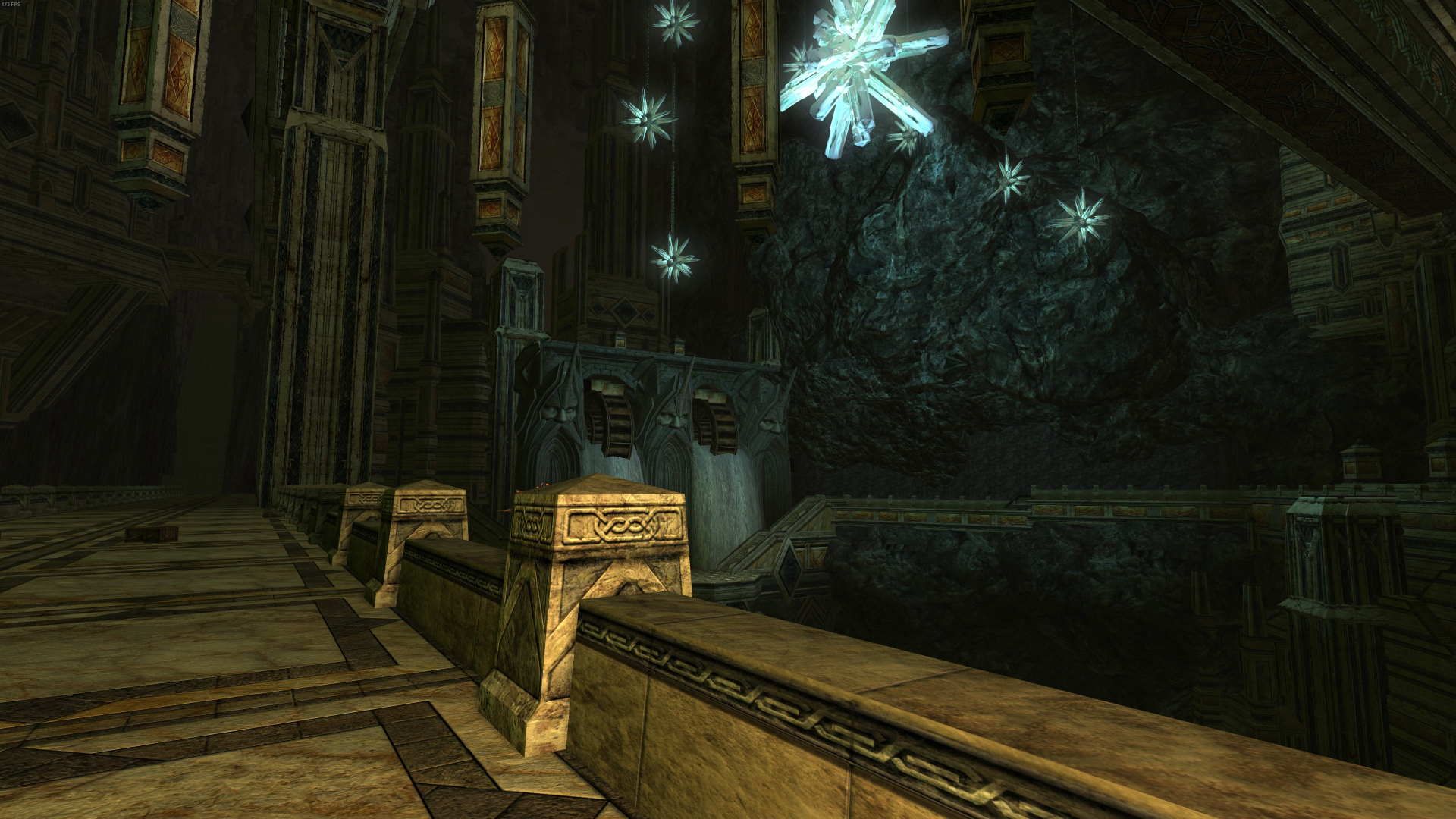 Much like Moria, there is an area too that reminds one that plants exist. While not initially built that way, the ceiling of the cavern has long-since collapsed, allowing gardens and plantlife to flourish. It reminds me of Tharâkh Bazân in Durin's Way, a nice reprieve from the halls of oppressive stone in Moria. While the planting of the forests here was deliberate, the Clovengap is the result of nature itself taking back over in the long years since the Dwarves lost Mountain-home. It tells a story, something Standing Stone Games has become really good at over the years.

While I've not completely explored all that Gundabad has to offer yet (our full review is scheduled for this coming week), I can't help but feel awed at every turn. Moria wowed with its scale and near endless emptiness. Gundabad is wowing me with the sheer beauty and skill the team behind LotRO is showing building large, complicated regions that feel distinct, yet part of a whole. Hopefully this holds up as I close in on the level cap, and finish up the content for our Fate of Gundabad review.