One of the best, if not the best damage engraving in Lost Ark, and also the most controversial. Depending on which content creator', writer, or person you follow or listen to, you'll probably hear different opinions. It is one of the best engravings for damage and is greatly heralded in the KR version. In the NA version, however, the opinions on Grudge are incredibly divided amongst the community. 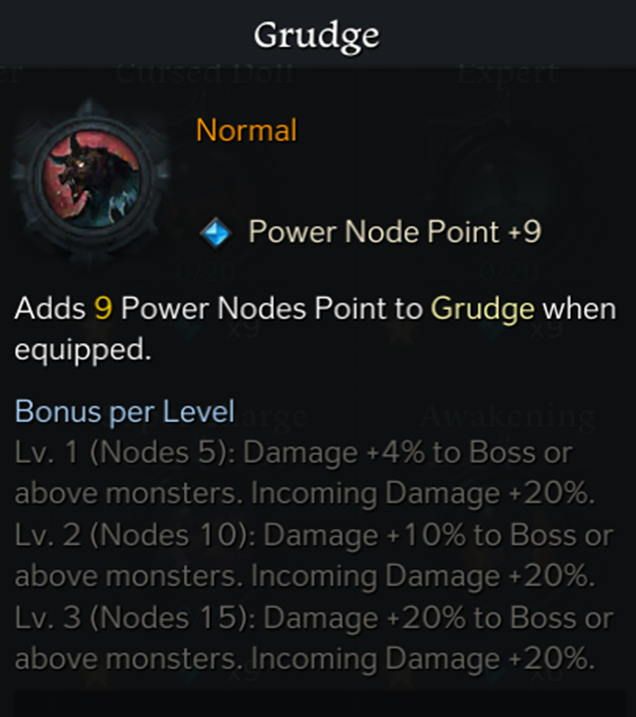 So, to get things out of the way first, you never, ever, want to use level one or two Grudge. There's just no feasible build scenario where you'll settle for any level that isn't three. This isn't true for some other engravings. Adrenaline, Drops of Ether, Ether Predator, Heavy Armor, Spirit Absorption, and in some cases, even Cursed Doll are all excellent options at level 1 or 2, especially when you're looking to squeeze in that last level in your perfect build.

At our endgame, most builds would like to grab 5 level 3 engravings or 5x3, with the top of the echelon achieving 5 level 3s and 1 level 1. There are some variants of this, for example, a Red Gunlancer that is looking for level 1 Combat Readiness, but can't quite get 5x3+1, can do something like, 4 level 3 engravings, 1 level 2, and 1 level 1. The point is to get the equivalent as efficiently and as cost-effectively as possible.

What if I told you that that extra 20% damage taken doesn't matter?

Often times in Lost Ark, there are three primary ways damage is presented:

If you're taking a ton of damage to begin with, chances are you failed a mechanic. If you're failing a mechanic, it's likely a detriment to your group in some way shape or form, where it be damage uptime, positioning, or communication. That isn't Grudge’s fault, and even if it were, building your character under the presumption that you’re going to play poorly is not something you should be doing, especially not on the engravings front (unless you happen to land on Heavy Armor +1 I guess). If you’re playing a squishier class, like Gunslinger, then you’re likely dead anyway. On beefier classes, like Artillerist or Gunlancer, these big hits are survivable anyways.

For smaller, random damage from normal patterns, the point needs to be emphasized here: Grudge is never going to be the deciding factor on whether you die or not.. If you have 10k HP and take 1k damage, is 1.2k damage really hurting you that much more? 2.4k? 3.6k? Is potentially using a potion a little sooner really the tension point in your decision making? This small damage factor matters even less if you're with a support. I know it sounds similar to the first point, but it’s important to understand why you took damage, if it could have been avoided, and if something else could have helped you. Did your support shield you in time? Are you using the correct potions and battle items? Did you use your movement skill too early or too late?

Another strike against not using Grudge is the sheer amount of classes that have ways of inherently mitigating Grudge in the first place:

If you are playing any of the above classes, you already have ways to stymie the negative effect of Grudge. There isn’t really a reason to not use it, as you’ll barely feel it compared to a lot of other classes. At worst, you’ll effectively be playing a normal character defensively. And at best, it will quite literally not be a factor at all (in Gunlancer and Artillerist’s case).

The biggest downside to Grudge isn’t in the increase in damage taken. It’s really the cost of getting it into a given build. Right now, in NA East, Legendary Grudge books are quite expensive.

Legendary Grudge is arguably the best investment you can make on your account if you have multiple DPS classes. This is because of how expensive any given accessory with Grudge on it can be. While something like, 320 thousand gold is incredibly expensive, it is also gold that you’ll never, ever, have to put down again.This is on top of never needing to invest in more than a single Grudge 3 accessory on any class you play, or any class you create in the future. This is a huge way of saving money and I’d highly recommend it to anyone willing to invest in their account’s future.

I hope this at least invoked a reconsideration to those on the fence about Grudge. It is a truly powerful engraving that’ll give you so much more, and does much less to your detriment as you may think!